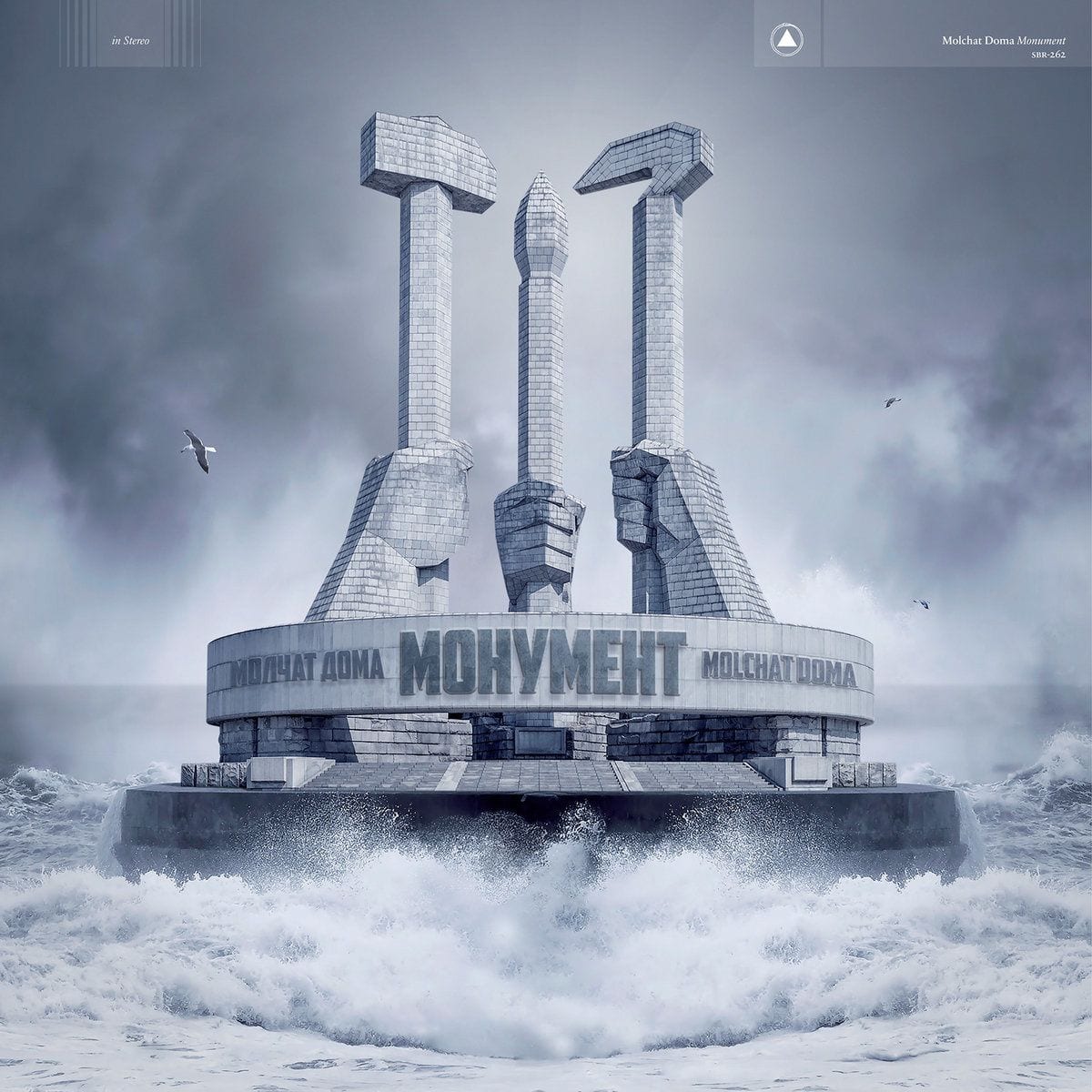 In Minsk, the bust of Felix Dzerzhinsky — founder of the KGB — still stands. On the Island of Tears, the deaths of 771 Belarusian soldiers in Afghanistan are commemorated by a crying angel and grieving women. An obelisk hails Minsk — declared a “Hero City” in 1974 — and a victory column stands crowned with the Order of Lenin, while a statue of a woman silently serenades listeners with her trumpet. Then there’s the Pit, where the forces of Nazi Germany eliminated 5,000 Jews on a single day in 1942, including the children from the ghetto’s nursery who were buried alive to save bullets.

The city is steeped in reminders of the past and it’s perhaps unsurprising that Minsk’s Molchat Doma should name their third album Monument, its cover representing a mighty architectural tribute seemingly unmoved by the crash of mighty waves. The triumphal edge is tempered by the presence of hammer and sickle — symbols of a dead regime — by the somber greys that consume the scene, and what might be smoke coiling into the sky.

Molchat Doma make no secret of their influences, but — in keeping with the Sacred Bones label’s overall aesthetic — they do a good job of revitalizing the sounds that make up their palette. The whole album whirs into life like the opening of some vast electronic orchestral score or the range-testing fanfares of a cinema sound system advert. There are one or two such touches later, and they’re always welcome. “Lubit I Vypolnyat” opens with what could be the roar of wind or the rumble of tube trains and calls to mind a horrendous incident in 1999 when the audience of an open-air concert, caught in a sudden storm, flooded into the underpass of a Minsk metro station with more than 50 were trampled to death.

It’s a shame that there isn’t more space allowed for these alternately harsher or gentler excursions into instrumental space, but the band are very much focused on making pop songs — and that’s no shame given how well they do it. Opening song “Utonut” hammers home inhuman gated reverb drum hits while the two keyboardists — Pavel Kozlov and Roman Komogortsev — set spiraling synthesizer melodies against one another, one low- and one high-pitched. Meanwhile, if someone told me singer Egor Shkutko was the test-tube manufactured lovechild of Robert Smith and 1985-era Morrissey, I would nod acceptingly.

The band have two clear modes. In one, they’re a guitar/bass-led post-punk band following in the echoing footsteps of Joy Division — as on “Otveta Net” or “Svezdy”. In the other, they’re Depeche Mode composing keyboard ballads like “Udali Tvoy Nomer” or the foot-stompingly awesome “Discoteque”. The switch of instruments stands out because it’s the most visible shift across the album. Otherwise, the pace never really lets up, there’s nothing marking flow or progression, and there’s a definite feeling that these songs could be in any order and still work. Let me emphasize that they DO all work very well indeed.

The album’s clearest virtue is its precision: nine songs, no filler, no visible weaknesses — Monument is as solid as the monoliths to which it harkens. It’s an intriguing exercise in the constant presence and eternal unrepeatability of memory, the past, and the present intermingling and changing one another. These songs conjure uncanny impressions of a hundred others, but they’re just ghosts, and there’s no one else playing “Leningradskiy Blues” with its tight-wristed strumming, heavy bass, and evocative vocal. The absence of words distinguishable to an English-speaking listener means the brain fills in possible emotions and meanings, which might shift on every listen.

Amid the ethereality of past and present, the band’s experience of it translates into something concrete in a literal sense. Molchat Doma’s two albums preceding Monument translated as Floors and From the Roofs of Our Houses. Reading translated lyrics, one finds their songs are replete with walls, whitewash, windows, slammed doors, opened doors, floorboards. Against these blank objects is ranked equally impassive nature: ice, sky, stars, and sunlight. The human narrator is squeezed between these impervious surfaces.

The relief is always brittle and kinetic as city lights at night. “Otveta Net” is a tour-de-force for guitarist Komogortsev who, after a catchy opening phrase, starts hurling in a series of twanging guitar patterns, constantly one-upping himself so desperately and effectively that he must be drenched in the sweat of exertion by the final note. “Discoteque”, meanwhile, is a pumping release of frustration, wired on speed, and momentarily able to mention a ‘starry sky of love’ and believe in it too.

Recent single “Ne Smeshno” is a clear highlight with its prowling bass rhythm underpinning Shkutko’s voice, which hangs like cold mist in some vast catacomb. The accompanying video with its hazmat-suited individuals leading frail civilians from old buses, its everyday moments polluted by hazy green light while the masses close their eyes tight shut, is another stark conjuration of still present history. More than 60% of the fallout from Chernobyl fell on Belarus, irradiating millions of its citizens and contaminating vast tracts of land. Molchat Doma make a point of not standing above or apart from the sickness or from the desire to be blind to it.

It’s impossible to consider
Monument and its lashings of history without thinking of the current moment and the Belarusian protests against Alexander Lukashenko, the former Soviet soldier and collective farm director. He has held the post of President since July 1994. While extensive opposition has left this living gargoyle seemingly unmoved, contemplating the edifice on the front of Molchat Doma’s album throws up the subtle point that water pressing on weak foundations will undercut and topple even the most colossal testament to man’s hubris.