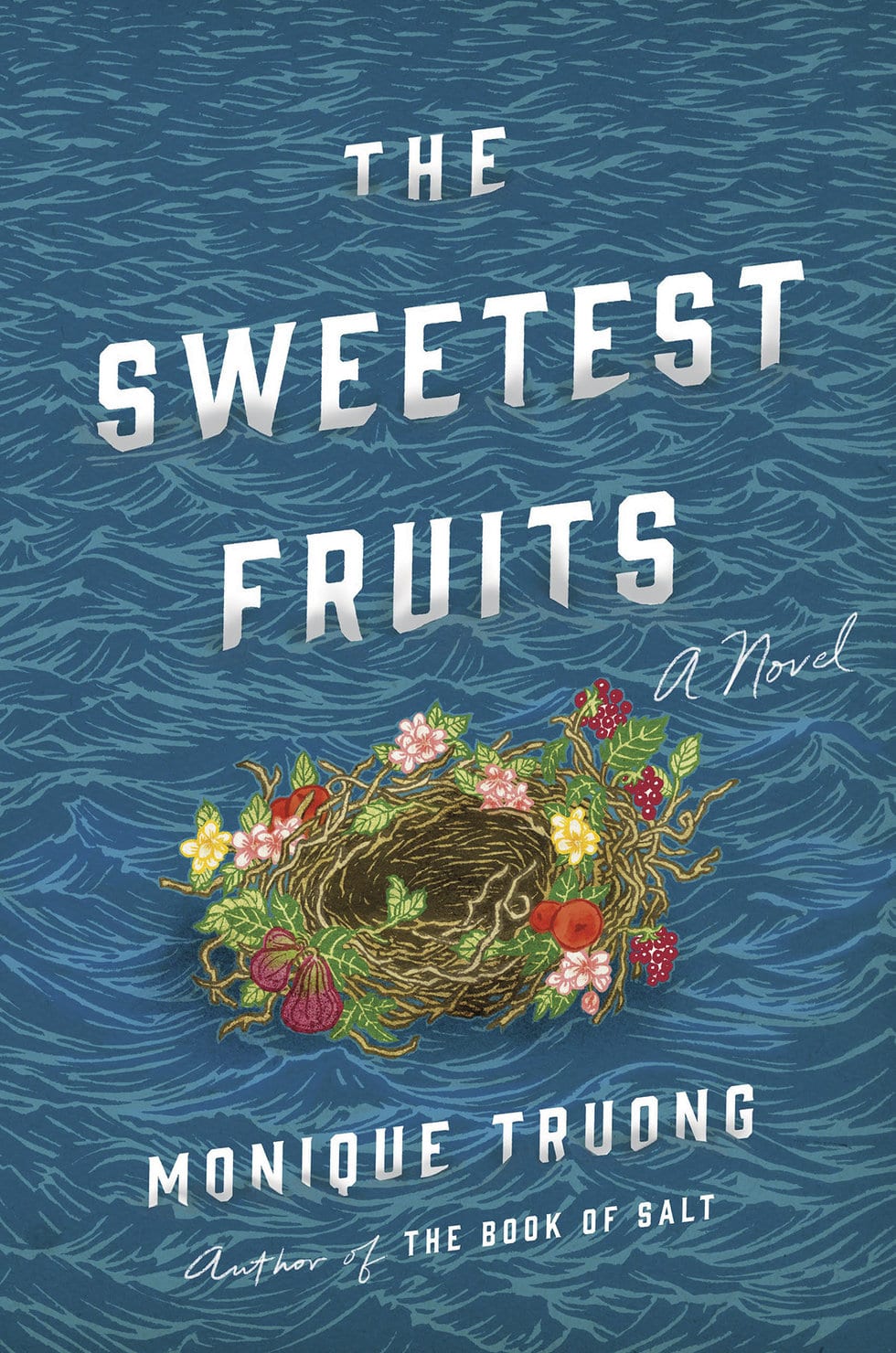 Lafcadio Hearn is one of the western writers most intimately associated with Japan, although as Monique Truong‘s The Sweetest Fruits reveals, Hearn’s Japanese sojourn comprised only part of a restless and eventful life. The product of a Victorian-era romance between an Irish soldier serving abroad in the British army and a young Greek woman from the island to which he was posted, Hearn had a troubled and lonely boyhood in Ireland. Upon finishing his education, bereft of kin, blind in one eye due to a schoolyard accident and with virtually no financial resources, Hearn made his way to America, where he struggled to eke out a living as a writer and journalist.

He wandered from job to job and state and state, and eventually gathered enough money and journalistic credibility to travel to the French West Indies, where he resided and wrote for a time. It wasn’t enough to quell his restlessness: he wandered on to Japan, and there finally found a place to call home, after a fashion.

Appointed to teach English in the nascent Japanese educational system, it was in Japan that his writing reached its apotheosis – an impressive body of work ranging from sociological analyses of Japanese society to the collections of folktales and ghost stories for which he is probably best known. His works were eagerly consumed by English readers in the w|West for whom Japan was still largely unknown territory. It was here that he married and had children. In order to ensure that they (and he) would be allowed to remain in Japan he gave up his British citizenship and was adopted into his wife’s Japanese family, becoming one of the first westerners to gain Japanese citizenship.

But already this summary of Hearn’s life betrays the spirit of Truong’s magnificent novel, because although Hearn is its central subject, the book is not really about him. Hearn is the common axle around which their tales turn, yet this rich historical novel is fundamentally about the lives of three women: his mother and his two wives. Hearn is a prominent component in their lives (for better or for worse, and often for worse) yet he is ultimately incidental to the story told in these pages. And a beautiful, moving story it is.

“…despite his apparent commitment to the worlds from which his wives come, [Hearn] remains ultimately a colonizer in every sense: not extracting natural resources and wealth from the colonized, but rather stories to enthrall and titillate his white, western readers.”


The first portion of the story is told from the perspective of his mother, Rosa Antonia Cassimati. The daughter of a tyrannical Greek patriarch, she suffers under his repressive rule until a chance meeting precipitates her romance with Hearn’s father, an Irish officer serving in the British colonial army. Her story sees her grow into a willful and confident woman, ultimately transcending both the violent patriarchy of her father and the bumbling, colonial-era misogyny of her husband and the bigotry of his family. Her tale is written in the form of a letter to young Lafcadio (he was named after the island from which she came) but in the end she leaves him in the hands of a wealthy Irish aunt – at the family’s insistence – and returns to Greece, a free and independent woman.

Alethea Foley is the second woman whose story the novel depicts. An African-American woman raised as an orphan in the newly emancipated United States, she was employed in the kitchen of the rooming house Hearn stayed at upon his arrival in Cincinnati as an aspiring young writer. After a secret romance they marry and move in together; Hearn attempting to support her and a young boy they care for through his work as a journalist. Interracial marriage is widely illegal at this point in American history, however, and Hearn is fired when his employer learns that he’s cohabitating with an African-American woman. After a brief struggle to carry on, Hearn eventually abandons Alethea, hitting the road to pursue his career as a writer.

Years later, he arrives in Japan, where he meets and marries Setsu Koizumi, daughter of a samurai family that has fallen into poverty in the wake of Japan’s Meiji Restoration and rapid-fire modernization. The family grows to include four children, and moves about the country as Hearn pursues research and employment, before his death in 1904 at the age of 54.

Truong’s superb novel provides a powerful feminist retelling of this saga. All three women struggle, in radically different cultural contexts, with the misogyny they face in their respective lives. In each case patriarchal attitudes are coupled with other forms of bigotry: the colonial denigration of his mother’s Greek origins; the virulent racism which remained rooted in post-Civil War America (and has never gone away); and the chauvinism of a Japanese society that considered an interracial family to be always outsiders and ‘half-castes’, no matter their formal citizenship.

Aficionados of Japanese literature and culture will be familiar with the broad contours of Hearn’s life, so this outline of the novel’s plot should give nothing away they do not already know. It’s not the suspense of ‘what will happen next?’ that drives this tale, but rather the author’s skilled and sympathetic presentation of the three women, whose rich interior dialogue and powerful, resilient personalities keep the reader glued to the page.

The sorriest part of the tale (and probably the least known) is that of Alethea Foley, Hearn’s African-American wife. Hearn has been described admiringly by some as having been a progressive ahead of his time to be willing to ignore racist laws and marry an African-American woman in clear violation of existing societal norms, jeopardizing his employment by doing so. Yet not too long after losing his job because of this, he abandons her – hardly a heroic follow-through.

Indeed, there are signs that he considered himself the victim of racism for having been fired; yet to dwell on his firing ignores the racism his wife experienced all her life (shaping what she’s allowed to do during the day and where she’s allowed to go). By abandoning her, Hearn is free to reinvent himself – to pick up his white privilege again and thrive as a working journalist and writer. Yet the wife he leaves behind has no such ability to weave in and out of privilege at will.

Hearn is still highly regarded as an early writer and researcher on Japan (his books are considered classics), but Truong’s novel does an excellent (if somewhat speculative) job of putting him in his place, and reconsidering his legacy from the perspective of the women whose lives were affected by him. He comes across, in essence, as an overly sensitive, self-absorbed child. One is sympathetic to his sensitivities, recognizing his difficult and isolated upbringing, yet the reader cannot help but pass judgement on the narcissistic – and typically masculine — way in which he allows his needs and sensitivity to criticism to take priority over the people around him.

Indeed, it becomes clear that he relied deeply on both Foley and Koizumi for many of the stories that he published to reader acclaim (in the former case, regaling white readers with exoticized stories of African-American culture; in the latter, regaling western readers with fantasies of the equally exoticized Far East). In this sense, despite his apparent commitment to the worlds from which his wives come, he remains ultimately a colonizer in every sense: not extracting natural resources and wealth from the colonized, but rather stories to enthrall and titillate his white, western readers.

Truong is more fair to Hearn than perhaps I am in this review; she portrays him as a complex character, torn between his innately gentle sensitivity and desire to love on the one hand; and his embattled pride and narcissism on the other. But ultimately, the reader winds up not caring too much about Hearn and what happens to him; his presence in the novel is at once central and yet also ephemeral.

It’s the women of the story who endear themselves to the reader, and whose stories we wind up caring for; it is they who prove to be the truly substantive, complex characters of the tale. Truong deserves considerable praise for the beautiful, complex story she has wrought in this novel (for which she conducted extensive historical research, spending time in each of the locales that feature in the tale). As a moving, poignant novel it is magnificent; as a recontextualization of malestream history, it is long overdue.