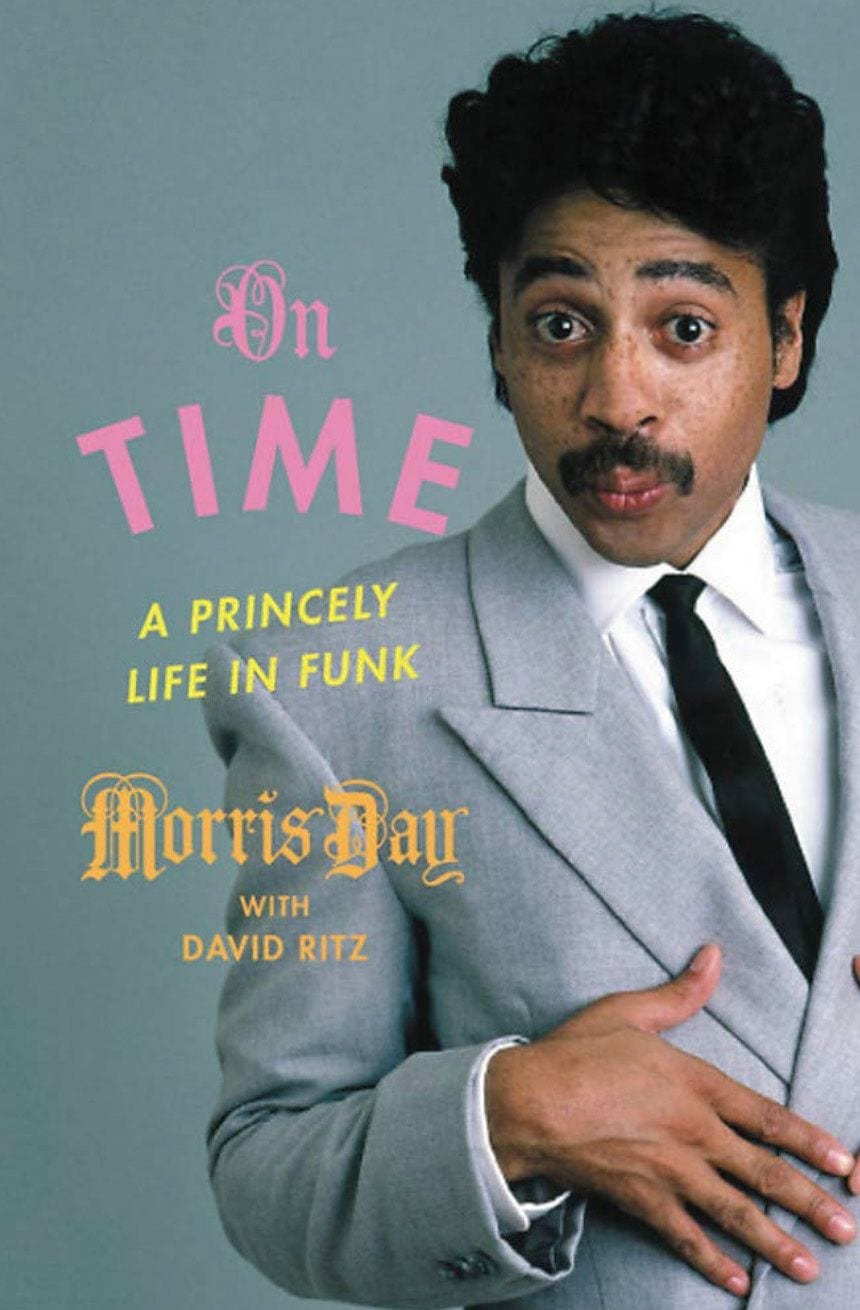 Prince is in Morris Day’s head, and he’s not shy to say it.

More to the point though, Morris Day knows that anybody reading his new autobiography, On Time will have Prince on their mind just as much if not more. It’s not to diminish his personal star, but Morris Day and his group The Time are and forever will be inextricably connected to the Minneapolis funk legend.

Since Day has always been a next-level crowd-pleaser at heart, he of course gives them what they want: Prince, and lots of it. In addition to including copious amounts of behind the scenes Prince, Day allows Prince’s ‘voice’ to speak throughout the book, because as Day puts it to the readers, “Gonna let you hear the voice that I’m hearing.” He also includes one additional voice worth hearing as well, and it all adds up to a surprising and decidedly funky take on memoir.

“Prince is the first word in this book” is how it all begins in the prelude, with Day setting up the reader for a bumpy ride of straight-up personal biography and snarky commentary supplied by Day’s “Prince” voice. “Good decision, bro. & I’ll tell u y. More folks r interested in reading ’bout me than u,” the imaginary Price tells Days in his head. Truthfully, it’s funny, but more than anything it shows Day’s preoccupation with his place in the music world. Day built his everything on top of Prince’s everything, and it’s no secret. “…u’ll need me 2 check u along the way,” Day’s Prince says. He does.

To his credit though, Day does not shy away from his own story, giving the reader an overhead vision of a meandering boy with one thing holding him together: the groove. As his family moved from state to state and city to city, Morris kept the groove in his head. After his first break with Prince, he moved to Maryland, where he heard Prince’s first single over the speakers while pushing rental cars at a Montgomery Ward. Of course, he told his co-worker he used to play the drums for the man on the radio. “What you doing here renting Impalas?” was the reply.

From there, Day continues his sometimes sad, sometimes triumphant story, and he eventually works his way back into Prince’s camp, as what was always going to be the way. He tells of his years as a videographer, where he was asked to document as much of the public Prince as he could, so this is where we get the most Prince out of the book. Good stories abound here. We find out about Prince’s first big tours with Rolling Stones and Rick James. We hear backstage stories, as well as some insight into Prince’s mysterious ways.

Eventually, of course, Day and Prince join forces to create The Time. Here’s another area where Day concedes to Prince, as Prince spearheaded much of the project in the early years, with Day as a co-producer and contributing writer and performer. Day details the work ethnic needed to work with Prince in the studio as well as on stage, where The Time supported Prince as an opening act on and off for years. This is where we hear of Day’s development as a character and as an act, which is obviously where he begins to shine as a personality: fur jackets, suits, expensive shoes, and all that glorious confidence.

More importantly, though, at this time, we meet a new character: a monstrous version of Morris Day called just plain MD. MD likes to party. MD likes drugs as well, and most unfortunately, MD has little to no self control. MD helps to break up The Time, helps to break up his some of his relationships, and ultimately leads Day down a path to regret and loneliness. Only two things can dig Day out of this hole: Prince and The Time, which he returns to again and again in his life. And this is where he stands today, as the leader of Morris Day and The Time. He’s proud of it.

Upon completion of Day’s memoir, one thing is clear as a theme: influence. Some people move through the world by leaning on others. Day did this, of course. It’s not like he didn’t need his family at any point in his life. Yet, he has a unique story of connection and influence in Prince. Prince created his own world, and it was mysterious and powerful and alluring because so few people got to really see it. Day lived in it on and off for many years of his life, so of course Prince is still stuck in his head. I mean, Prince is probably still stuck in your head from the last time you heard one of his songs over the speaker at the grocery store. Happens all the time.