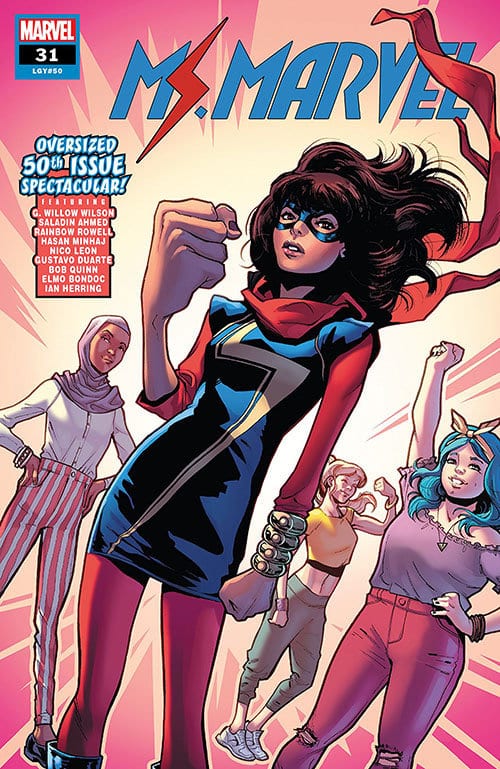 Every now and then a popular character comes along that reveals more about the audience than the world they inhabit. Over the past five years, few characters have proved more revealing than Kamala Khan and it’s not just because she takes a moniker once held by Carol Danvers. A big part of her appeal comes from her being a self-proclaimed superhero fan. Before she gets her powers, she carries herself the same way many fans in the real world do, writing fan fiction and participating in debates on message boards over who can lift Thor’s hammer.

Another part of her appeal comes from her reflecting the growing diversity of the real world. She’s the daughter of Pakistani immigrants, a practicing Muslim, and resides in a community where she is both a minority and an outsider. She deals with all that on top of being a teenager. Even before she gets her powers, Kamala deals with her share of struggles. Even with all the controversies surrounding diversity in the current media, Kamala stands out as a character many can relate to.

This sets a celebratory tone for Ms. Marvel #31, which marks the 50th overall issue of the series since its debut in 2015. While fairly recent in the context of the Marvel Universe, which spans five decades and multiple Secret Wars, Kamala Khan’s impact still is strong. G. Willow Wilson gathers a sizable cast of writers that include Saladin Ahmed and Rainbow Rowell to tell a story befitting of the character’s growth.

In the context of a milestone issue for a teenage superhero, a slumber party is a fitting setup. It gives Kamala a chance to be Kamala instead of Ms. Marvel for a while. She assembles several female friends who have become important supporting characters to her story over the course of 50 issues. Nakia, Mike, and Zoe may not be on the same level as a Bucky Barns, Harry Osborn, or Pepper Potts, but they bring something important to Kamala’s persona and not just because they also happen to be teenage girls. 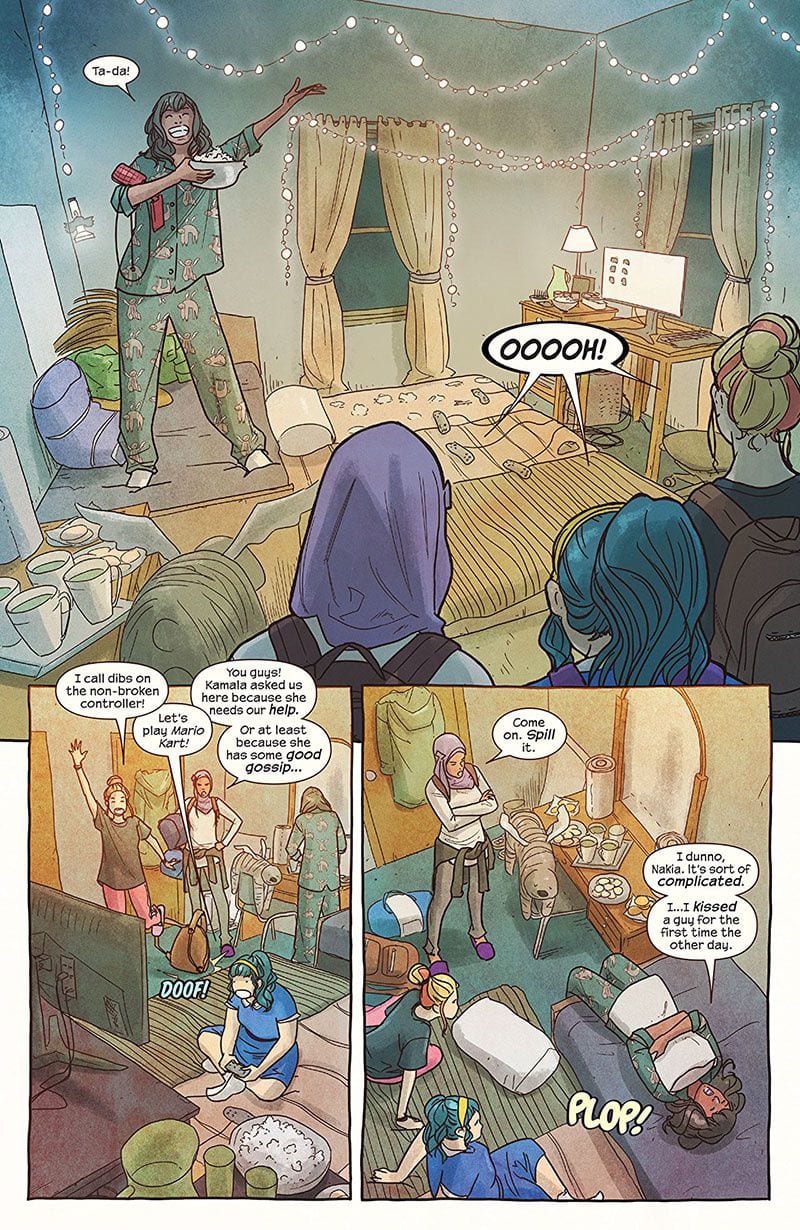 Every superhero character, especially the ones still in high school, goes through their share of hardship and melodrama. Being a teenager is hard enough, but being a hero on top of that just compounds every issue. The weight of that stress gets to Kamala more than once over the course of 50 issues. The past several issues really add to the strain by including romantic issues with her long-time friend turned love interest, Bruno. That gives a non-superhero gathering with her female friends a sense of urgency.

Beyond simply enjoying some sense of normalcy, the party also gives Kamala a moment to reflect and even lament a little. Wilson conveys the impression that Kamala needs that cathartic moment and she needs the support of her friends. Many comics heroes either struggle to make that effort with their allies or just never get the opportunity. This party has the potential to be therapeutic for Kamala. Unfortunately, complications emerge, but in a way that’s both entertaining and reflective of why Ms. Marvel is such an endearing story.

Even in the comfort of her own home, surrounded by friends and her mother’s cooking, Kamala ends up having to be Ms. Marvel for multiple conflicts over the course of the night. These conflicts range from dealing with an angry Inhuman to teaming up with Miles Morales to chasing two teleporting animals through an alien planet. It never gets too dire. Some of the plots are downright cartoonish, but they maintain an appropriate undertone.

Kamala makes clear from the beginning that she wants to have one night where she doesn’t have to be a superhero, but she keeps getting pulled back into it due to forces beyond her control. The responsibilities of being a hero don’t leave her, no matter how much she tries to catch her breath. She never hesitates to act heroic when called upon. She doesn’t even whine about it, which already makes her more mature than Peter Parker ever was at her age.

She’s not just the kind of hero who fights villains and occasionally crosses paths with giant teleporting dogs. She’s someone who tries to overcome a struggle with tactics that don’t just involve punching things with an oversized fist. They don’t involve comedic wisecracks, either. Again, she’s several steps ahead of Peter Parker and a few other recent superheroes these days (looking at you, Deadpool).

Like Superman and other heroes that embody an ideal, Kamala will actually sit down with someone and talk to them before they descend into villainy on par with the Red Skull. She’ll try to connect with them on a personal level. She’ll make a genuine effort to help them. Kamala isn’t the kind of person who just tells people what they want to hear so they’ll stop smashing things. She genuinely cares. At a time when every other superhero seems jaded after one too many battles with Hydra, her compassion and patience helps her stand out.

The story here culminates in a moment when Kamala decides to throw another complication into her superhero/teenage life. She takes a chance that most teenage heroes avoid in hopes of regaining some semblance of balance. The results aren’t too surprising, given the strength and competence of Kamala’s cast, but they’re still satisfying.

Ms. Marvel #31 doesn’t attempt to reinvent Kamala Khan or redefine her identity as a hero. She’s still the same lovable character she was before she got her powers. She’s still growing and has plenty of room evolve, but her accomplishments over the course of 50 issues are still impressive on multiple levels. A story of a single slumber party gone awry may not do her character full justice, but it’s a good start.