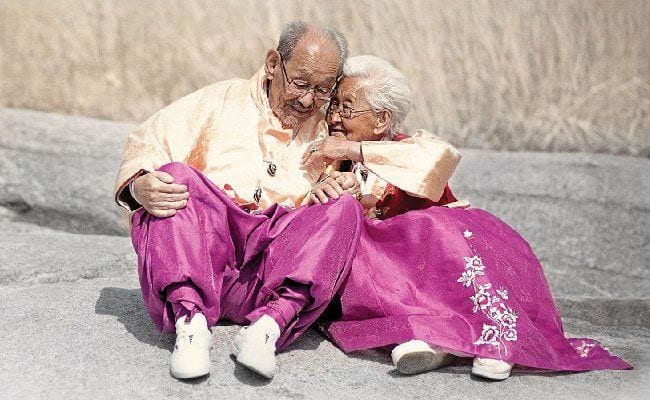 With its first shot, My Love, Don’t Cross That River establishes that it cares little for surprise or suspense. An elderly woman sobs at the foot of an undetermined grave, clearly mourning the loss of a loved one who recently traversed that proverbial body of water. To capitalize fully on the scene’s tragedy, the film then presents its title card over none other than a docile river; this pointless reminder that the outcome was the opposite of what the old woman wanted certainly fosters grief and sadness, but very little else.

While moments like the aforementioned affect viewers when used on occasion, the film’s first moment serves as an unfortunately accurate indication that this documentary exists solely to manipulate two of the most universal emotions: love and loss. My Love, Don’t Cross That River exercises these sentiments so exclusively that it becomes a struggle to feel anything profound by the end.

Mo-young Jin’s debut follows an elderly Korean couple — 89-year-old Kye-yeol Kang and her 98-year-old husband, Byeong-man Jo — as they near the ends of their lives. Filmed over a period of roughly 16 months, the film’s first half showcases their most joyful and romantic moments: Jo sings to Kang while she urinates in the outhouse to keep her fear at bay; Kang smiles as Jo wolfs down the meal she prepared, recalling that he has never said anything bad about her cooking; they even engage in leaf, snow, and water fights as if they are no more than a few years old at heart. Observing the couple in this state feels rather similar to watching a roomful of puppies through a glass door — it’s adorable for five minutes, until a question arises: “So, is anything going to happen, or is this all you got?” Suffice to say, My Love, Don’t Cross That River bores all too quickly.

Even more disappointing, though, is that their displays of affection are so unrelenting that the couple appears to play for the camera, forcing one to question their genuineness early on. Not only does their modest lifestyle make it believable that Kang and Jo might not fully understand that this device captures actions in full, but they appear unaware of the filming altogether — they never acknowledge the camera’s presence, an unorthodox choice for a documentary film.

Due to this, the project has a rather scripted feel, and the first half plays like an extended interview, in which the couple highlights only the traits they wish to display, rather than presenting their less polished idiosyncrasies. Perhaps they really are that satisfied with the humble life they lead, but the suffocating façade of pleasure makes it challenging to believe that what is on the surface wholly represents what is beneath.

Of course, Jo’s health eventually takes a nosedive; his dopey glaze makes way for bouts of violent coughing, and the film’s glossy sheen fades as a reminder that death lurks in the wings. This turning point should come as little surprise to the viewer who paid attention to the cold open, but it’s hard not to be grateful that the status quo has finally shifted. Jo’s pain dispels any questions of documentarian authenticity, and also allows Jin’s voyeurism and patience to finally prove rewarding.

This is perhaps most evident when the filmmaker highlights the uncontrollable decay of Jo’s body: examples include scenes of late night bladder relief, and Kang’s comments on her husband’s thinning frame. Jo’s bodily cessation also provides some much-needed forward momentum, which can only be found previously in the sparingly used voice over Kang offer as back-story to justify their utopic romance.

The film’s most intriguing moments, though, come in the juxtaposition of the couple’s micro universe with the world around them. Kang and Jo stand out amongst modern folk in their identical, traditional garb; for what it’s worth, this happens to be one of the few examples of pervasive adorableness that doesn’t grow tired throughout. Several of their interactions with modern society occur at the hospital, in scenes that present everyday citizens the opportunity to comment on the couple: a doctor smiles when they bow in sync to express gratitude; another looks on as Jo refuses to leave the room in which Kang receives a scan; nurses laugh at Kang’s fear of shots, and then laugh more when she scolds Jo for not telling the doctor to go easy on her.

Though these scenes fascinatingly illuminate how removed Kang and Jo are from contemporary society, it’s hard not to feel a twinge of frustration. Clearly, encountering a couple such as this doesn’t occur on a regular basis for the average human, but Jin does such a lackluster job exploring their singular lifestyle that the only logical conclusion is that he did not care to do much legwork beyond selecting inherently engaging subjects to document.

Thus, the director uses Kang and Jo as bait, but pulls the hook out of the water before the viewer can sink its teeth into it. This is most notable in a family potluck scene in which the couple’s eldest daughter scolds the eldest son for not sufficiently providing care for his parents in their old age; Kang and Jo are left in tears. This feud, though, goes unresolved, as the son only returns to the screen later to mourn his dying father in a moment that serves as a reminder of the lack of sensitivity in Jin’s voyeuristic approach.

It’s shortcomings such as these that reveal the documentary’s core issue: an utter lack of character or story development. Despite inching closer to death by the second, Kang and Jo hardly change: they are perpetually head over heels in love, and not much else. The result is an overarching message that offers nothing beyond: “Love is wonderful, and it is sad when it goes away.”

Perhaps unsurprisingly, then, the film ends where it begins, with a woman sobbing in front of a grave. The reprise doesn’t offer an interpretation of the sobbing that differs from the first shot, and thus Jin’s goal becomes crystal clear: he wants the viewer to feel love and pain, and nothing else.