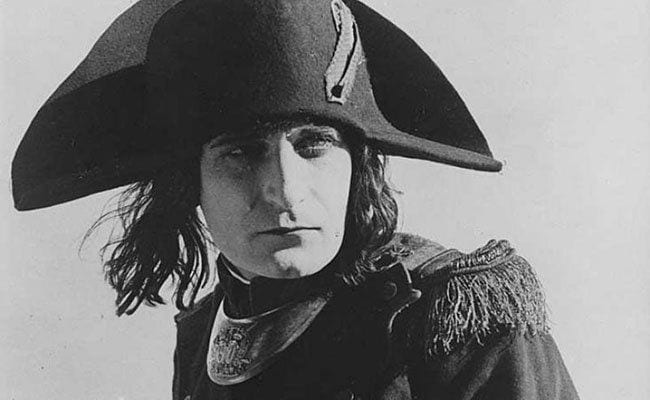 “I have given myself three months to conquer Italy,” declares Napoléon (Albert Dieudonné), via subtitle, somewhere towards the fifth hour of Abel Gance’s 1927 silent epic. It’s a statement that, in its grandiloquent absurdity, sums up a great deal of the appeal of Gance’s epic, which combines avant garde cinematic techniques with a broad-brush theatrical sensibility to offer a vision of its hero that is at once mythic, monumental and deliriously, irresistibly florid.

Gance intended Napoléon to be the first of a six-film saga dedicated to Napoléon’s career; however, the challenges and costs of the production meant that this idea was abandoned. The history of the film itself is a chequered one: after premiering in Paris in April 1927, the movie screened in eight European cities before MGM bought the rights to it. After a London screening, the film was cut significantly in length, however, and ended up being edited into so many different versions that it took the British film historian Kevin Brownlow some 20 years to put together a relatively complete version. Brownlow’s version was released into cinemas in the early ’80s, and came complete with a newly composed score by Carmine Coppola (for the US release) and one by Carl Davis (for the British screenings).

Before its ecstatic ’80s reappraisal, however, Gance’s film had already won numerous admirers through intermittent revivals, not least among the directors of the French New Wave. Pushing the boundaries of the medium themselves, this group clearly embraced Gance as a kindred spirit and an important forebear, and responded to his film’s formal innovations, which include superimpositions, rapid cutting, split-screen and, most famously, the triptych width screen process known as “Polyvision”. This precursor to CinemaScope was developed especially for Gance’s movie and involves the simultaneous projection of three reels of film in a horizontal row.

Nonetheless, despite such acclaim for its innovations, and its frequent appearances on “100 Greatest Films of All-Time” lists, Napoléon is a work that may have been more fawned over than it’s actually been seen over the years. That makes the BFI’s restoration of the film, which Brownlow has again overseen, a particularly valuable one. (The movie is also being re-released in to cinemas, and this is its first time on Blu-ray.)

Gance’s movie spans approximately 16 years: it covers Napoléon’s childhood, his rise through the ranks after the Revolution and his marriage to Josephine, and culminates in the Italian campaign. The excellent opening section, “Youth of Napoléon”, presents the child Napoléon (played by Vladimir Roudenko) at military school where, bullied and tormented for his Corsican heritage, the boy is already revealing himself as a skilled tactician during a snowball fight and a subsequent dorm-room scuffle. (Perhaps Brady Corbet had these moments in mind when preparing this year’s admirably ambitious, if ultimately misbegotten, The Childhood of a Leader, a title which would also fit these scenes perfectly.)

Yet, despite the apparent intimacy of these opening scenes, which invite close empathy with our hero, what we learn about Napoléon as a man is minimal throughout the movie. Dieudonné has amazing eyes and a strong presence, yet his performance doesn’t give a lot away. Nor are the complex machinations of the Revolution itself (with Antonin Artaud, no less, turning up as Marat, and a highly theatrical recreation of Charlotte Corday’s murder of him included) very clearly delineated, even though the scenes themselves are lively and highly enjoyable. (Given the problematic history of the film, some continuity blips are to be expected, but Brownlow has truly done a remarkable job in gathering the different versions into a coherent whole.)

Mostly, though, Gance’s Napoléon is simply presented as a single-minded man of “Man of Destiny” and the triumphalism of this movie’s conclusion — the fulfillment of that boasted-of Italian invasion — is pretty objectionable when you think about it. Yet, even if the simple-minded politics make you wince, it’s hard not to be swept up in Gance’s vision, whether it’s the stunning sequence that puts us right in the boat with Napoléon as he battles through a storm (as the “Ship of State” is rocked back on land in the political arena) or, in the revels following the Terror, in which the camera whips up a frenzy of excitement that even Ken Russell might have considered over the top. Then there’s the climax itself, a brilliantly bombastic spectacle in which the triptych effect is fully realised, as an eagle — Napoléon’s friend and emblem since childhood — spreads its wings across the three screens.

While doubtless scintillating in the cinema, the Polyvision climax is inevitably somewhat diminished when shrunk onto the TV or computer screen, meaning that even after almost six hours of viewing, you’re immediately eager to see the movie again: this time, on the biggest screen possible. Still, the disc’s extras, which include Brownlow’s 1968 BBC doc on Gance’s silent films, an interview with Carl Davis about composing the score, and an insightful commentary by Paul Cuff, make up for that disappointment, offering valuable insights into the film’s development and restoration, and Gance’s work more broadly.

The viewer may come away a little sad that this visionary director’s career never really developed as it should have done, and that the series of which this film was meant to be the first installment never saw completion. Still, in its glory and intermittent absurdity, the stunning Napoléon is more than movie enough.