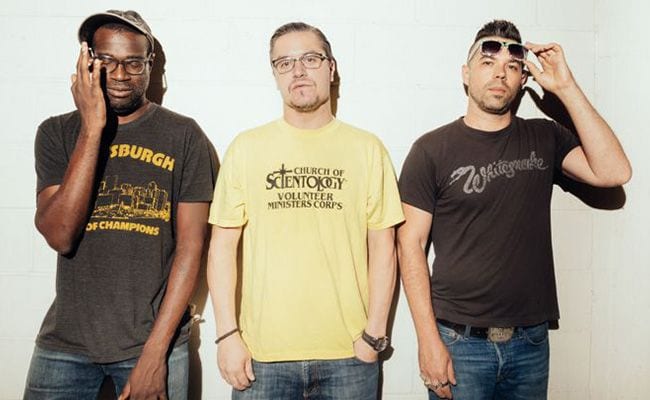 Nevermen is an interesting and fun collaboration between TV on the Radio’s lead singer Tunde Adebimpe, Adam Drucker, aka Doseone, and all-world vocalist Mike Patton. The trio share all musical duties on Nevermen, most obviously the vocals. Nevermen trade lines, sing in harmony, and exchange rap verses on the album. There’s no concept of “this being a Tunde song” or “Adam has a great solo here.” It’s collaborative all the time.

Musically the songs on Nevermen trend toward catchy hard rock but aren’t limited by that genre description. The record’s most head-bobbing, brightest song is the loping “Mr. Mistake”, which resembles a vocal-oriented track from math rockers Battles. Chirping synths are married to big beats and layered under with easygoing acoustic guitar strumming and piles of other digital sounds. It even features a steel drum-like synth solo mid-song. Meanwhile the three singers switch off between lines and, on the chorus, swap on practically every word. It makes for a weird but ear-grabbing mélange anchored by the lines “If it’s between give and take / You’ll take take take.”

More representative is the hard-charging “Right Animal Wrong Trap”.” This song pushes forward on a bed of driving drum machine and synth bass, with frequent stops that throw the listener off-balance. The unusually placed three-part harmony on the chorus (“A dozen over roses / And a single golden egg”) is the most striking thing about the song; at least until the halfway point. Here the trio suddenly break into a rap verse and follow that with a beatless, organ-backed bridge that finds them harmonizing the line “This will simply not work like barbed wire on pollen.” This is weird stuff, but it’s catchy and it’s entertaining and it doesn’t feel forced.

Not everything on Nevermen quite works. “Treat ‘Em Right” has the uncomfortable combination of that title and a refrain that repeats “Treat ‘em like a prostitute.” This is a song where lyrical clarity would certainly help, but here the line trading, esoteric asides, and layered vocals muddle the point, if indeed there is one. Album closer “Fame II the Wreckoning” wants to be a slow build but instead ends up being boring. Adebimpe opens the song with mostly wordless crooning over very quite organ chords and sparse bass notes, gradually climbing into singing words two and a half minutes later. The chords get louder, choir voices join in, and Patton begins to echo Adebimpe. Finally, after nearly four minutes, the song hits a refrain and stays on it for its final two minutes. And the drums and full band enter at the four and a half minute mark, giving the song a funky, catchy climax that only lasts for 45 seconds before dropping back out and beginning the long fade out. It’s a nice climax, but it in no way justifies the interminable build up to get there.

Those are the exceptions, though. Songs like the heavy, beat-driven opener “Dark Ear” and the dark synth-rock of “Shellshot” find spaces for all three vocalists to contribute equally while staying musically focused. “Hate On” is the other song that deviates from the band’s main template. This one also features a gradual build from wordless vocals, but the tight harmonies are much more interesting than on “Fame II”, and the percussion accompaniment that enters around the one-minute mark gives the song forward motion. Eventually the song brings in the crunchy guitars and starts to rock, but in this case that section feels earned because of the more effective build up.

Nevermen hits enough familiar places that fans of any of the three any individual artists will be able to enjoy it. It also doesn’t fall into the twin supergroup traps of lazy songwriting or forcing chemistry. The trio worked together on and off for years to develop the album, giving themselves the necessary space to find a natural collaborative sound without having to keep an eye on a deadline. The end result is an album that feels like a group of experienced musicians experimenting and amusing themselves without sacrificing a core thread of melody.