You know AOC. The youngest woman ever elected to the U.S. Congress. The most-spotlighted of the “blue tsunami” of 2018 and of the candidates in Rachel Lears’ 2019 documentary, Knock Down the House. The Latina Democratic Socialist who represents parts of the Bronx and Queens and quotes Watchmen on Twitter. As written and drawn in Alexandria Ocasio-Cortez and the Freshman Force: New Party, Who Dis? from Devil’s Due Comics, she embodies public service…and she kicks some ass. Like most anthologies, it’s uneven. At its best, it’s lovely to look at, laugh-out-loud funny, and thought-provoking.

On artist Tim Seeley and Devil’s Due founder Josh Blaylock’s cover, Ocasio-Cortez wears a white pantsuit and glasses, one hand holding a cellphone and the other beckoning us forward. A red elephant lies defeated on the ground and a blue donkey looks on nervously. The “Washington Warrior” variant cover features the same posing, with a sword in place of the cellphone and a Wonder-Woman-esque outfit and tiara in blue and gold in place of the white suit and glasses. All three colors are associated with suffragists.

Connoting heroism and power, these depictions of her carry heavy representational weight, because there have been so very few Latina superheroes and similarly few Latina Congresspeople. 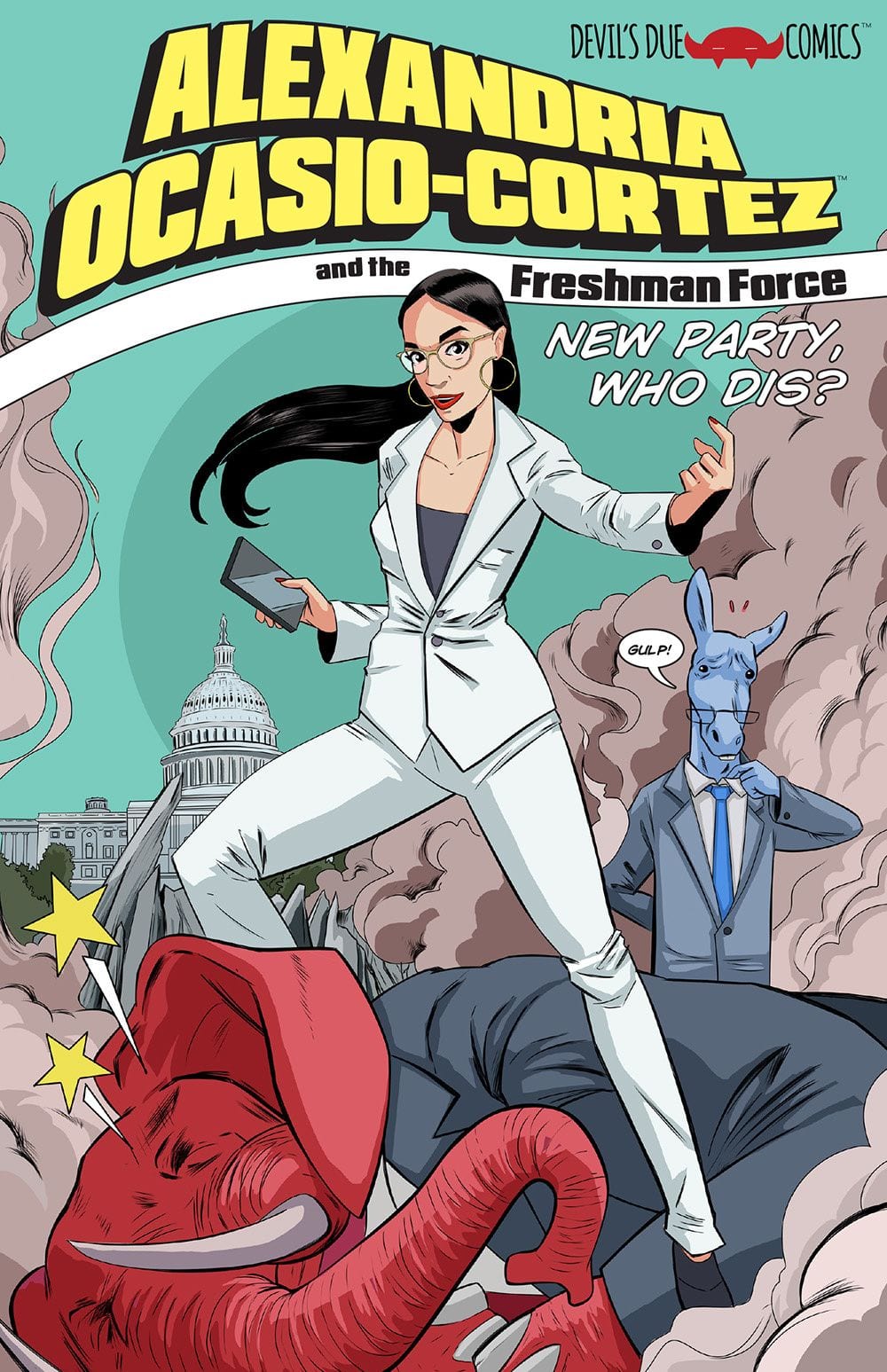 Portrayals of Latina superheroes have been marked by underrepresentation, stereotyping, racism, and sexualization. Rarely included at all, they have often been shown as requiring rescue from Anglo superheroes, as a maid or nurse, as emotional, as lighter-skinned, and “without a strong sense of Latinidad.” The bilingual, brown, and queer Renee Montoya (DC) and America Chavez (Marvel) in comics, along with “Yo-Yo” Rodriguez on television (Agents of S.H.I.E.L.D.), are newer and more nuanced. But they don’t represent the numbers nor the diversity of Latinas in the US.

This very small amount of increased diversity in both the comics world and the political world has profoundly upset some people. These apparently very frightened and/or aroused men have tried to “mock and diminish and discredit” Congresswoman Ocasio-Cortez by drawing on old tropes. They have tried to tell her, and us, that she doesn’t belong in Congress by referring to her as a “little girl” and as “nasty”, by falsifying nude photos, by willfully mispronouncing her name, by isolating freeze-frames where she looks angry and overlaying them with made-up quotes, by focusing on her makeup and her dancing and her bartending.

Ocasio-Cortez and her supporters are not having any of this. They are calling it out for what it is, expressing pride in the same things that make her detractors uncomfortable and angry, and forging ahead to remake US politics. As is this comic, named for its protagonist’s clapback to conservative Democrat’s Joe Lieberman’s “hope” that “she’s not the future” of the Democratic Party: “New party, who dis?”

New Party, Who Dis? touts itself as “Featuring More Creators Than There Are Payments Left on Your Student Loans!” Including some heavy-hitters in the comics world, the 23 credited creators of the 18 pieces are mostly male and Anglo. This, along with the title of the comic employing the word “freshman“, and the way in which her skin tone appears lighter on the cover and in a few of the pieces, could have been more carefully considered. However, partial proceeds from the comic, one assumes because of Ocasio-Cortez’s attention to immigration and to veterans, are to be donated to RAICES (Refugee and Immigrant Center for Education and Legal Services) and the USO.

There are several strong “traditional” superhero and action hero stories, in terms of their writing and art styles as well as their sense of fun, use of kinetic action, and displays of power with responsibility. “Justice Engine”, by Sherard Jackson, features Ocasio-Cortez alongside her fellow Congressional freshwomen: Rashida Tlaib (D-MI), Ayanna Pressley (D-MA), and Ilhan Omar (D-MN). Expertly piloting ships around an adversary built by Senate Majority Leader Mitch McConnell (R-KY), they “Voltron” up to become one united Justice Engine. “Make America Empathetic Again”, by Dean Haspiel and Christa Cassano, features Ocasio-Cortez as a black-clad ninja who enters the White House “in hopes of eradicating America’s greatest threat.” After knocking the President out à la Captain America punching Hitler, she shaves his head. Both of these end with cute twists as well. 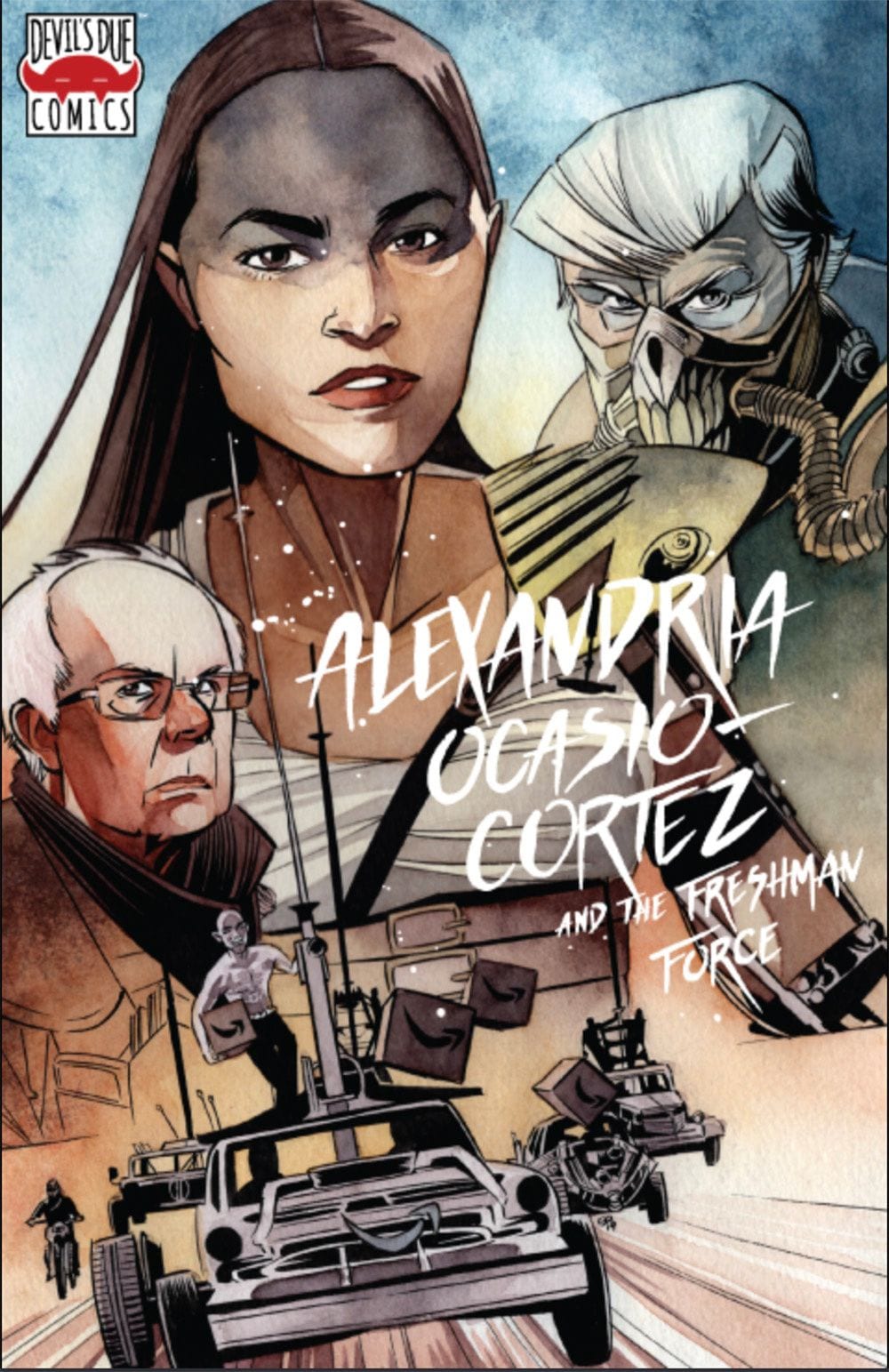 Four others also successfully overlap action and sci-fi genre tropes with real-world politics. “Tweetworld”, by Pat Shand, Larry Watts, and Jim Campbell, imagines Twitter as an actual arena full of “dragging” and chaos, even between ostensible allies, until Ocasio-Cortez shows up in a white suit, carrying a sword. “The Matriarchy Reloaded”, by Adam McGovern and Jason Goungor, portrays Ocasio-Cortez as a bartender until Bernie Sanders (I-VT) gives her a Matrix-y blue pill that transforms her into a Congresswoman ready to kick down McConnell’s door. In Jeffrey Burandt, Sean Von Gorman, and Paul Mount’s “Female is Future”, she is a white-suited, red-pumped warrior who sets off a bomb to rid Washington DC of an “orange fungus” whose “seeds had been planted for decades”, and in Nick Accardi, Travis Hymel, and Micah Myers’ “AOC 3:16”, she is a wrestler battling Big Pharma, Big Oil, and the NRA alongside Sanders, Maxine Waters (D-CA), and House Speaker Nancy Pelosi (D-CA).

Some of the pieces are non-fiction, like a matching game where you can draw lines between hefty PAC monies and their Republican recipients; an infographic explaining the money supply and the financial crisis; and a somber reflection on mainstream media. “Dance Party USA”, by Peter Rovtovsky, stands out among these. Photorealistic, yet beautifully colored in blue and black, it is a rumination on democracy and dancing, that people “endure the hardships because they know there will be dancing in the end…Maybe it’ll be a party if she really gets her way…Maybe this time we’ll all be invited.”

Similarly serious, and the most striking of the single-page pinups, is the great Jill Thompson’s “Every American is entitled to…” It is a watercolor of Ocasio-Cortez, the Statue of Liberty, and President Franklin Roosevelt, with text from his 1944 Economic Bill of Rights declaring Americans’ rights to a good education, to a decent home, to adequate medical care, to earn enough for adequate food and recreation, etc. 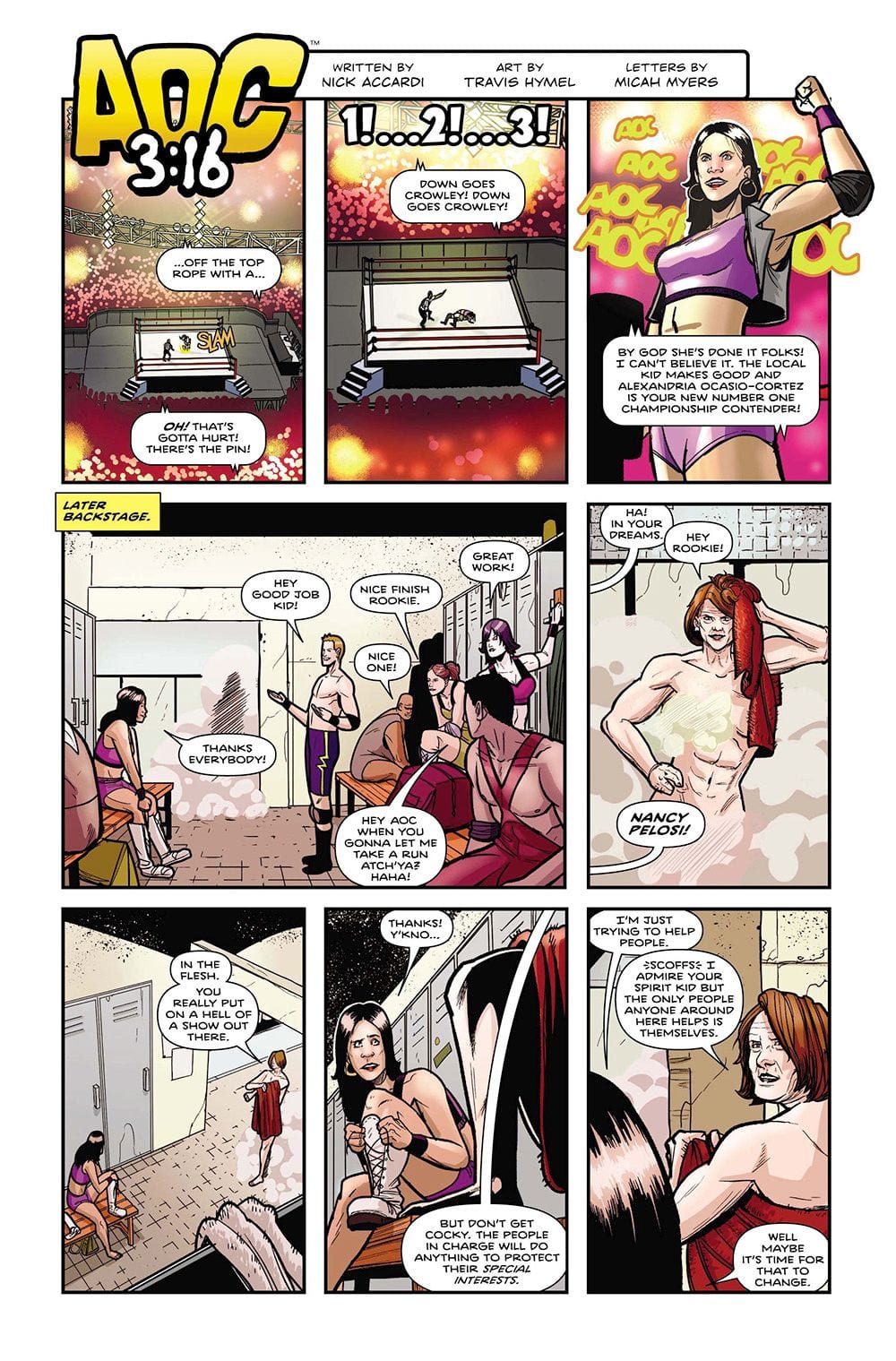 Thompson’s page, and three others in particular, display entirely different art styles that all mesh well with their themes. On the lighter side is Josh Blaylock’s “Where’s Mitch?” It’s like Where’s Waldo, but the face of Mitch McConnell is hidden in a full page of pen and ink drawings of turtles’ faces. Robert Sikoryak’s “Puerto Rican Girl from the Bronx”—clad in a chain-mail shift dress rather than a chain-mail bikini—is drawn after Frank Thorne’s Red Sonja, with her upraised mace and spear, atop fallen men. And Jose Garibaldi (of Captain Underpants fame) poses her smiling broadly, arms overhead, in front of a graffitied wall in “AOC’s Congressional House Party”.

The idea of a young, liberal, non-wealthy Latina transforming into a national leader—or a superhero—was for most of American history, just fantasy. Two power fantasies thought by some to be so dangerous that they continue to fight both through omission and denigration.

This volume, though, names and satirizes the kinds of oppressive dog whistles that undermine imagining marginalized peoples as superheroes and leaders, and celebrates Congresswoman Ocasio-Cortez’s identity, beliefs, and work. It does all of this through short stories and illustrations featuring ninjas, spaceships, dancing, explosions, FDR, wrestling, and orange hair, and through centering a person who has overcome great odds to try to stand up for justice, equality, and hope. Like our elected officials and our superheroes are supposed to do. 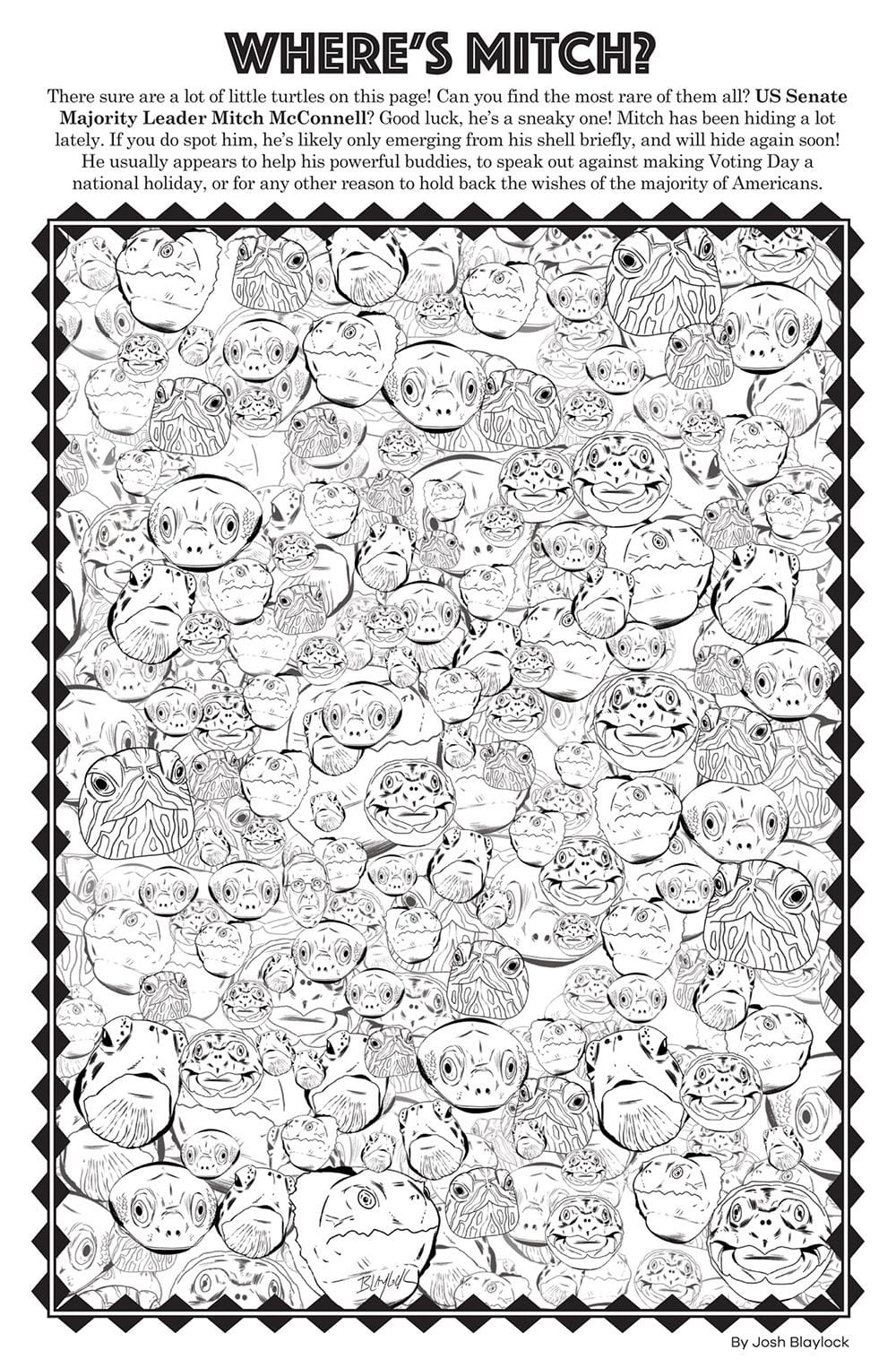