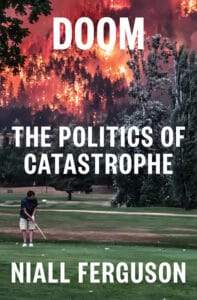 That is how Hector, the well-loved if problematic grammar schoolteacher in Alan Bennett’s 2004 play, The History Boys describes the methods of Irwin, a rising star of a teacher whose smooth and telegenic style he views as dangerously shallow. Bennett reportedly based that character in part on Niall Ferguson, though likely also on other historians well known in the United Kingdom for their attention-seeking TV-friendly style and willingness to lob out bracing but not always supported ideas to kick up a fuss. Bennett’s satire of a style he characterized as “a free-floating state of suspended cleverness” may be slightly too all-encompassing, but it’s recognizable to anybody who has seen Ferguson on camera or read him at any length.

Over the course of some 15 books, Ferguson has produced several solid general histories (Civilization, The Ascent of Money) and at least one arguable masterpiece. (The War of the World is crucial reading for anybody grappling with the enormity of ethnic-based slaughter during the European world wars.) A popular historian with a strong grasp of facts and narrative, he can render great swaths of human civilization with both engaging sweep and persuasive detail, a far less common attribute in his profession than one might think.

That being said, Ferguson has never attained the status or broad perspective of think-again historians like Barbara Tuchman. This is largely due to his cheeky tendency to stake out contrarian viewpoints seemingly for their own sake and interject humor that comes across as entitled petulance. This is the columnist side of Ferguson, the man who once connected his divorce, World War I, the Treaty of Versailles, and Brexit, which he termed “the ultimate divorce“. He can also be sloppy when trying to make an argument on deadline, as happened with his error-riddled 2012 hit article on Obama for Newsweek.

Readers of Doom: The Politics of Catastrophe will find two Fergusons on display. Besides the conservative columnist who picks fights in periodicals in order to burnish his brand (or just to pick a fight) the serious, if sometimes wrong-headed historian, is also in attendance. Another of his big sweep texts, Doom is described by Ferguson as “a general history of catastrophe.” Though he admits to being inspired by the (as of this writing, very much ongoing) COVID-19 pandemic, his driving principle comes from a deeper source. He wants to discuss what lessons to take from how different societies have responded to disasters and how to avoid both “self-flagellating chaos” and calls for “totalitarian rule or world government”. Though he hits the first target with reasonable accuracy, he misses the second by an almost comically wide margin.

Doom is largely made up of detailed accountings of things going terribly awry for humans. These are generally due to plagues, wars, or natural disasters. Ferguson surveys a wide array of events, zeroing in on larger episodes such as the Black Plague and smaller disasters like the Challenger explosion. He uses those sections to show how human error can frequently compound already bad situations. Though pinpointing several truisms throughout history, he mostly and wisely tries to avoid great generalizations. When he does toss one off, it tends to be true, though a touch simplistic: “Often we are right for the wrong reasons” or “Plagues are generally bad for empires”.

Ferguson’s skeptical attitude toward easy answers runs through Doom like a jolting dash of ice water: “It is surely a category error to expect nation-states to behave like humans—like trying to extrapolate the incidences of pileups on highways from an understanding of the internal combustion engine.” He critiques the need of many historians to wrangle the fractal chaos of human events into a crisp three-act narrative. That comfort with chaos can make the narrative more trust-inspiring, as he is often not trying to marshal evidence for a particular theory.

Instead, Ferguson adopts the perspective that Tolstoy used in War and Peace to explain great events. In the so-called “Napoleon fallacy”, catastrophes are laid at the feet of a single leader, when in fact they are more often part of larger forces that sweep through history without regard for any leader’s actions, even Napoleon. This is a realist’s point of view, in which history still features villains, just more diffuse ones, such as “bureaucratic sclerosis”.

The cynic might say that this is simply Ferguson laying the groundwork for his later argument that the failures of America’s COVID response were due less to President Donald Trump’s malevolently clownish incompetence than mismanagement by the public health bureaucracy. While the point about wider governmental errors (especially at the CDC) is well-taken, his insistence that only Trump received any blame is simply insupportable. (Much of what Ferguson writes about the COVID pandemic and the modern era would have benefited from a greater distance as it often feels off-the-cuff, churlish, and better suited for a Twitter hot take.)

Doom contains several of those similarly out-of-nowhere ideological jabs. One section hinges on his disagreement with economist and historian Amartya Sen’s contention that famines are not natural but human-made disasters that highlight the failings of the market system. In the middle of a dive into the particulars of the 1943 Bengal famine, Ferguson acknowledges Winston Churchill’s “lack of compassion for the Bengalis” before scraping together a gallery of other villains to blame and pivoting quickly to the tragedies of Mao’s Great Leap Forward. He may well be correct that the anti-Churchill chorus could have too narrow a perspective on the famine. But this section raises a question that crops up elsewhere in the book: What exactly is Ferguson trying to say?

Though never lacking for engaging material and pithy summaries (describing the fractious and corporatized online sphere as both “monopoly and anarchy” feels just about perfect), Doom suffers from a lack of focus. Discussing cognitive dissonance, Ferguson links the forced totalitarian groupthink of Communist systems with the old conservative canard about the hypocrisy of “flying in private jets to conferences about the perils of climate change.” This is an irrelevant comparison and a particularly cynical attack, given his earlier description of spending January and February of 2020 flying to speaking engagements while not wearing a mask. (He “found it intolerable”.) He notes with chilling glibness that “I might have been one of the ‘superspreaders’ whose hyperactive travel schedules were spreading the virus.”

That same glibness crops up in a concluding section on the catastrophic risks of what he terms America’s “Cold War II” with China. The basis of his analysis, that China is not only spreading its influence but could well be scrapping for a fight and has the military capabilities to back it up, reads true. But his claim that “this new Cold War is both inevitable and desirable” because “it has jolted the United States out of complacency” has a certain post-9/11 imperial arrogance that clashes with his focus elsewhere on the necessity of clarity and humility.

Ferguson may well get that war. But as with all wars, he should be careful what he wishes for.