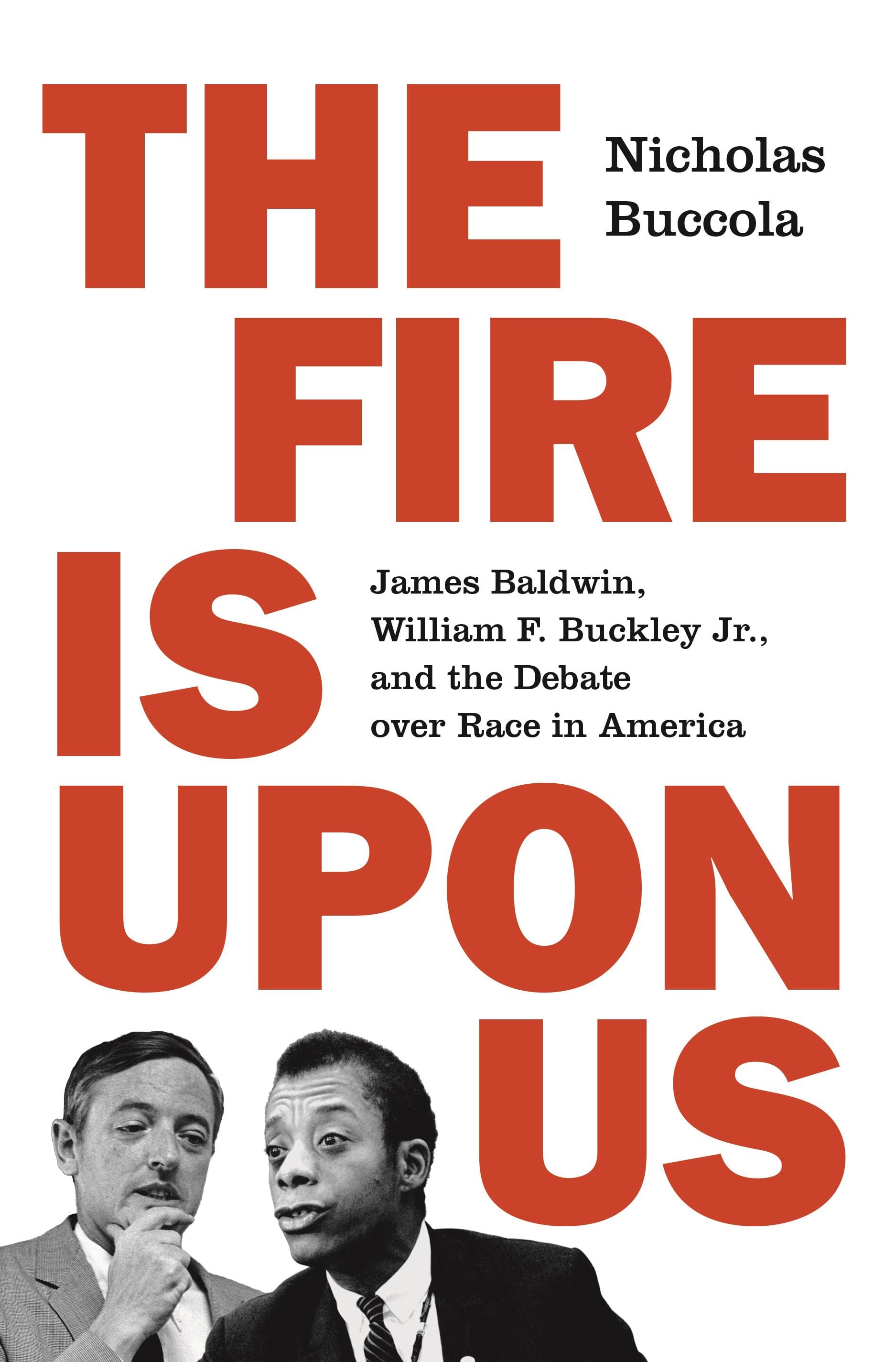 The Fire Is Upon Us: James Baldwin, William F. Buckley, Jr. and the Debate over Race in America
Nicholas Buccola
Princeton University Press

If we could agree that Nicholas Buccola‘s The Fire Is Upon Us: James Baldwin, William F. Buckley, Jr. and the Debate over Race in America is a book that has found its moment in 2020, as some critics have said in its favor, let it also be said that this should not necessarily register as a resounding endorsement of its contents. The book examines and often reveals insights into some of the subject matter listed in its subtitle. It is true that the matter of racism in American society is topical for 2020. And the writing of James Baldwin – arguably an authentic literary genius, certainly among the greatest American writers of the 20th century – also warrants a greater purchase on our collective imagination. In such ways Buccola earns his accolades.

But
The Fire Is Upon US reflects our moment in time in less flattering ways too. At times it is marred by glibness, impatience, and ahistorical tendencies that suggest, to an extent, it is also a reflective of the deteriorating conditions that mark our public discourse in 2020. Buccola’s damning of conservative author William F. Buckley Jr., for example, one of the book’s two key themes, brooks little opposition. One supposes that Buccola believes he has covered his bases.

Historically, some of Buckley’s more generous opponents on the leftward side of the political spectrum exhibited some willingness to grant small slivers of credit to him for his role in sanitizing certain noxious elements of Conservative philosophy in the post-war period, or even, in a more general way, for hosting a relatively serious and long-form debate platform for 33 years,
Firing Line, on PBS. For author Christopher Hitchens, Buckey was, at least, an enemy of the fascistic John Birch Society, the fringe anti-Semites, and the “weirdo isolationists” that inhabited the old Right. Somewhat facetiously, Hitchens wondered if Buckley was a closet progressive.

No such speculation arises for Buccola, for whom Buckley, at once on the wrong side of history for having produced a crude editorial in
National Review in 1957 called “Why the South Must Prevail“, must remain there in perpetuity, beyond hope for scholarly revision or rehabilitation either whole or in part. On the question of race, Buccola writes, definitively, “we search in vain for that moment when Buckley stood up and offered an unequivocal rejection of racist politics.”

In the 200-odd pages foregrounding this statement, Buccola details instances of Buckley rejecting an array of racist ideas and admonishing men who brandished them. He has shown that, as early as 1963, Buckley’s religious faith stirred him to wonder whether segregation could be reconciled with his Catholic beliefs. But these were instances of private contemplation or correspondence, for the most part.

What about public declarations? There are examples. On Firing Line he directly confronted Governor George Wallace and Judge Leander Perez – two of the era’s most prominent Dixie racists – for the various policy failures of their respective states, Alabama and Louisiana, as well as for their bigotry. Buccola breezes past these encounters. He also breezes past Buckley’s run for mayor of New York in 1963, when he proposed a variety of arguably progressive measures, and even speculated on implementing some type of “special treatment [of African Americans] that might make up for centuries of oppression.”

A case for Buckley in this direction should not be overstated. The historian Alvin S. Felzenberg examines the mayoral run in greater detail (and is the source of the above quote) in his biography of Buckley, A Man and His Presidents (2017). Felzenberg errs in the other direction, taking Buckley’s quote as an endorsement of affirmative action and positioning him as potentially “the first conservative in the country to take this stand.” This is probably anachronistic and probably a stretch. Buckley was not a closet progressive – far from it – and he was not a collection of perplexing contradictions either. He was a Conservative with a long career and a long trail of published pronouncements during a long and tumultuous era in American history.

Some of Buckley’s statements are indefensible in a modern light and some were objectionable to many observers in 1957, as Baldwin ably demonstrated. But when Buccola demands from Buckley “a forceful and unequivocal repudiation of racist elements in the right wing”, one suspects what he really wants is a statement that will satisfy the modern progressive’s tendency to judge historical agents by the moral and political standards of the present day.

Buccola’s treatment of the philosophical underpinnings of Buckley’s beliefs is also at times abridged in ways that seem careless. One such example appears in his (otherwise very readable) account of the debate between Buckley and Baldwin that took place in Cambridge in 1965. There, Buckley premised an argument on the “essentially fallen nature of humans and resulting universality of suffering.” This idea or versions of it – that every human society is imperfectible and incorrigibly flawed because the human being at the core of it is imperfectible and incorrigibly flawed – will be recognizable to any respectable Conservative and to any serious student of political philosophy. In various ways it appears, for example, in historian philosopher Michael Oakeshott’s critique of rationalism in politics, in Burke’s defence of settled institutions, and as a justification for Thomas Hobbes’ Leviathan. It also surfaces in the great world religions, for example, as a parable of the Fall of Man in Christianity.

Whether one deploys the idea appropriately, and why, are different questions. What is striking to the reader, for the present purpose, is that its significance as a philosophical premise fails to register in Buccola’s account. It is not a “conservative rejoinder” or a “useful conservative trope”, as he glibly puts it – it is a principle; it is no more a trope than “human rights” is a trope or “equality before the law” is a trope. Nor for that matter is it spin, a talking point, or rhetoric, as one might say on Twitter. It is a principle. That Buccola believes it can be hand-waved away in this manner is frustrating and shows a lack of engagement in substance and a lack of seriousness.

The second of the book’s two themes is the writing of Baldwin. Here is where Buccola’s heart really is and it is where he shows he is capable of insight. Baldwin was a profoundly sensitive chronicler of the human heart and of the psychic wounds produced by racism. Buccola takes the reader to these places and his case for Baldwin’s enduring significance is well made. But even here, the book’s polemical streak compromises it somewhat – like Buckley, Baldwin is not shown to have evolved much. He was simply right and his adversary was simply wrong. Our subjects are heroes or scoundrels and their evolution is not the point. If history is about process, change, and people and ideas in motion, then The Fire Is Upon Us must qualify as something else. It will undoubtedly appeal to individuals whose minds are already hardened and would wish to see their own judgments affirmed.