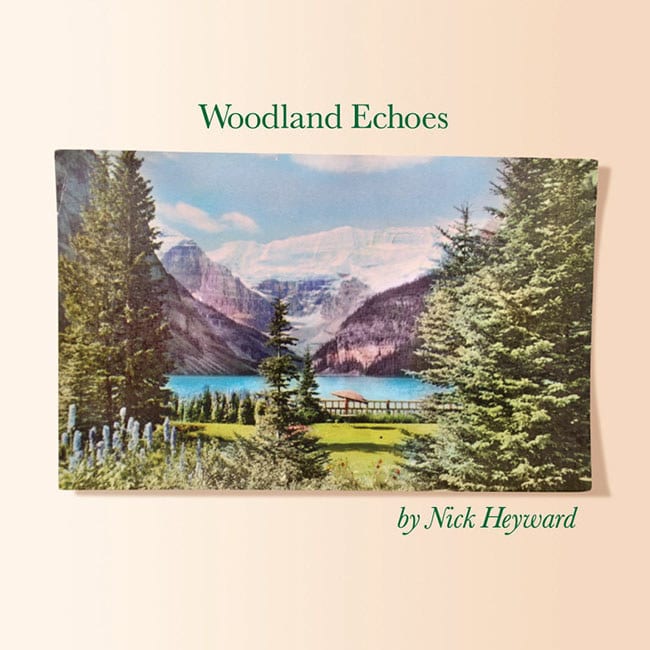 In our currently turbulent world, it’s been standard practice for “important” works of art – whether it’s books, films, music – to be labeled as “for our times”. I’ve been guilty of this on more than one occasion this year, referring to new releases by Chicano Batman, Father John Misty and Gary Numan as tonics for life in 2017. The same can be said for Woodland Echoes, the latest album from British singer/songwriter Nick Heyward, but not because it makes pointed sociopolitical statements: rather, his musical escapism transcends global chaos and allows the listener to simply breathe deeply and listen.

As a founding member of the popular – but short-lived – ’80s UK indie pop group Haircut 100, Heyward was responsible for such catchy singles as “Favourite Shirts (Boy Meets Girl)” and “Love Plus One” (with the video for the latter in heavy rotation on MTV circa 1982). He left the band after their first album, Pelican West, and has been churning out solo albums ever since, albeit at a relatively leisurely clip. In fact, Woodland Echoes is Heyward’s first solo album in 18 years, not to mention one of the more pleasant musical surprises of 2017.

This particular pace is not really shocking; listening to Woodland Echoes, you get the sense of an artist who is unconcerned with deadlines and only wants to make smart, breezy pop music without a lot of fuss. His boyish looks are largely intact – with his thick, trendy glasses and casual fashion sense, he looks like that cool college professor all the students want to hang out with – and he seems to be at peace with his status as a 50-something indie pop legend whose periodic albums get high grades with the critics.

The focus with Woodland Echoes is on compositions that reflect Heyward’s love for nature and the outdoors – as well as love itself. With the ticking of a clock serving as a metronome, opening track “Love Is the Key by the Sea” (reminiscent of low-key Beck albums like Sea Change and Morning Phase) sets the scene for the entire album with acoustic guitars and lush harmonies celebrating the simple life. “Come down /Breathe into the sun / Chill out / You and me are one,” he sings. “Love is an open book.” The next song, “Mountaintop”, is even more loose and laid-back, with an infectious country vibe (complete with acoustic guitars and a jew’s harp, of all things) complementing the irresistible Paul McCartney-meets-Neil Finn pop sheen. It’s pop music, but devoid of any artificial gloss or pretension.

“The Stars” occasionally ducks into Heyward’s ’80s heyday with little sonic treats like mild synth stabs and a light dance feel adding to the bright melodicism. Likewise, “Who?” is a delicious, horn-spiked jazzy number that sounds like classic British pop filtered through Cole Porter. These anomalies never distract from the album’s mission – instead, they give it an additional layer to appreciate and absorb.

Things occasionally get a little heavier on Woodland Echoes, but never distractingly so. Heyward’s brief time signed to Creation Records probably allowed a little bit of a Britpop influence to creep into his system, and songs like “Perfect Sunday Sun” and “Baby Blue Sky” are good examples of this, with washes of overlapping electric guitars meshing with lazy, tuneful psychedelia. “Forest of Love” also gives off a trippy, late ’60s feel, but never in a way that feels overstuffed. With its rich harmonies, baroque tilt, and measured instrumentation, it sounds like Andy Partridge channeling the Beatles.

With birdsong introducing “Beautiful Morning”, Heyward takes a successful stab at combining downbeat acoustic balladry with simple, positive wordplay that extols the healing power of nature. “When the morning dew is here,” Heyward sings, “And the afternoon is clear / When the flowers heal the day / And the blackbird sings my way.”

As the sounds of a thunderstorm introduce the song “New Beginning” (this album is heavy on the nature effects), rich, warm acoustic guitar follows, and instead of lyrics, heavenly “oohs” are all the vocals the song requires. Heyward is a smart lyricist, but this song is proof of the power of atmosphere. Listening to the track on a pair of headphones with the world’s distractions (temporarily) at bay is a great way to experience the sensation that Woodland Echoes conveys, and perhaps its ultimate goal: to transport the listener to a better world, and a more beautiful and hopeful one. Nick Heyward knows the way. He’ll take you there.