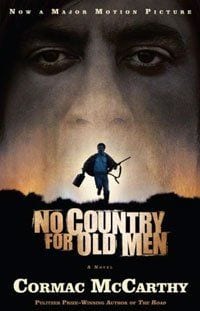 To call the film version of No Country for Old Men an adaptation does not quite do it proper justice. In many ways, Joel and Ethan Coen haven’t so much adapted McCarthy’s story for the screen as they’ve managed to find a way to realize his story. The treatment is so complete, so indebted to the text that at times it seems as if the brothers simply held the pages in front of the projector and through some otherworldly cinematic magic, transmuted the author’s words into the visible forms of what they represented. The Coens avoid that perennial complaint that the book is always, without exception, superior to the film. In this case, the film and the book are virtually one and the same, a testament to the skill and creative vision of all those involved.

This parity also presents a peculiar quandary for viewers who were provoked by the film to seek out the book. The reports are, for the most part, true. Nearly all of the film’s dialogue is taken from McCarthy’s novel. The events, as depicted, unfold along the timeline in identical sequence and aside from a few slight embellishments and diversions the final results are the same. The matter of the plot is faithfully portrayed by the Coens. Such congruence might sour those initial desires to leap from the screen to the page and relive the tale. One might think that the taut, thrilling suspense felt in the darkened theater might evaporate when every move is expected and the faces and places usually left to the reader’s imagination have instead been indelibly stamped by the filmmakers and actors.

Succumbing to such doubts is understandable, but thankfully, they are far from reality. What this connection between versions provides instead is an opportunity for readers to divorce themselves from the trappings of plot and immerse themselves in the rich and meaningful prose that Cormac McCarthy uses to create the glorious, sweeping Texan vistas and dark, claustrophobic encounters between life and death.

McCarthy’s text is sparse and blunt, and he treats the language of his characters in a deliberate way, designing every syllable and movement. From Sheriff Bell’s opening monologue, it’s clear that manners of speech and expression are important to McCarthy and to the story. The dialogue feels natural, and effortless, though it is no doubt the result of years of careful listening and attentiveness.

The conversations in No Country for Old Men aren’t artificially walled off interludes, sequestered from the action by the artifice of quotation marks. McCarthy eliminates quotation marks entirely, and the result is a great bleed of information. Two sides of a conversation bleed into each other, overlapping. The conversations bleed into the movements and settings. The lack of such a recognizable convention is jarring at first, but as the intent becomes clear the reader is left to consider the absurdity of such things. The elements of McCarthy’s scenes are painted with broad, messy brush strokes befitting their boundlessness, and the lack of clear, delineations serves to enhance ones involvement.

Another mark of McCarthy’s style is his frequent use of long, polysyndetic sentences, which imbue his characters with a sense of constant motion and entrance the reader with their rhythmic, flowing cadence.

When Llewellyn explores his windfall:

He folded the loose hundreds and put them in his pocket and then packed the rest of the banknotes into the case again and set the case in the chair and sat there looking at it.

When Chigurh tends to his wounds:

When he went back into the bathroom he stripped one of the syringes out of the plastic wrapper and sank the needle through the seal into the vial of tetracycline and drew the glass barrel full and held it to the light and pressed the plunger with his thumb until a small bead appeared at the tip of the needle.

Rushing, cascading actions, which seem to all fall upon one another in a moment. There’s nothing tentative or cautious about what the characters are doing; there’s no time to waste. It’s another demonstration of McCarthy’s disdain for excessive and unnecessary divisions, which subconsciously remind the reader of the artificiality of a narrative. He refuses to chop these long sentences up, to break the streaking movement that links these interrelated tasks. No Country for Old Men is constant, breathless motion, and the stylistic touches McCarthy employs ensures that the reader never takes their eye off the story, never allows the world beyond the borders of the page to interfere with what’s at hand.

Though it’s true that content-wise, the novel and film essentially mirror one another, the tone in which McCarthy casts his story seems to differ slightly from the Coens. In the film, the Coen brothers can’t help but add dashes of their idiosyncratic humor throughout. Without those scenes and their tension-bursting release, quite a few viewers might strain themselves to the point of stroke from the tightly wound stress of it all. McCarthy has quite a bit of sardonic humor as well, but rather than use it as a way to breathe relief in an otherwise frightful tale, it only adds to the dread that haunts the characters.

The Coens also made two rather significant changes that don’t really change the story but slightly alter its shading. The most noticeable is the omission of a scene from the novel that makes the psychopathic Anton Chigurh seem less ethereal, more mundane, and in a certain way even more horrifying. With his motivations rendered unambiguous and frankly workmanlike, the character’s bloody rampage seems all the more terrible.

The second change is more subtle, and concerns Chigurh’s interactions with Llewellyn’s unfortunate wife Carla Jean. It’s such a minor difference between the novel and the film, and yet the single act of concession she provides Chigurh almost completely reconfigures the emotional weight of the scene. McCarthy’s rendition is perhaps more true to life, more understandable, and far more dismal. In the film, one is left feeling triumphant, a moral victory scored against such a malevolent force is quite welcome, but in the novel, the little difference tastes like defeat.

Though the novel and film versions of No Country for Old Men share the same long, desolate stretch of road, they provide differing ways of encountering and interpreting the signs along the way. The similarities should not be enough to dissuade one from making the trip the second time, and slowing down to fully grasp all the little details of this epic journey.