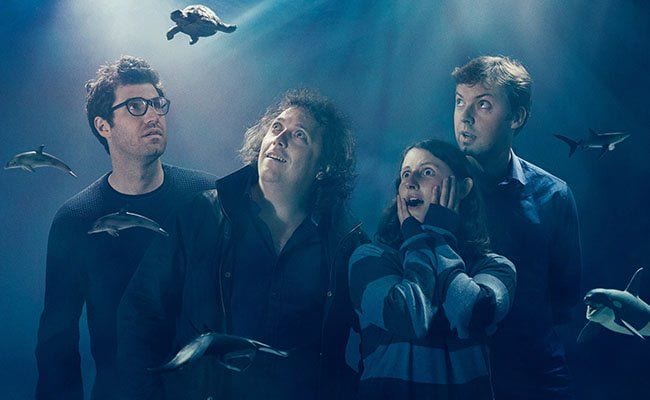 The QI Elves
No Such Thing As a Fish LP + 52 bonus tracks
Alcopop! Records

In October 2015, Stephen Fry announced he was leaving QI, the BBC’s comedy panel game show where being interesting is just as important as being right. With his National Treasure, the most-clever-man-in-the-world status, Fry was the ideal host — a balance of wit and wisdom. Could the show go on without him?

Yes, it could and it did. Sandi Toksvig took over the following year, and she’s doing well, with some claiming she actually revitalised the show: “Watching her debut episode was both exciting and reassuring; reassuring because her introduction was low-key and seamless, and exciting because her presence helped blow away some of the cobwebs that inevitably built up during Fry’s tenure” (Stuart Heritage, “Forget Stephen Fry-Sandi Toksvig has made QI sing”, The Guardian, 28 October 2016).

So while he was cherished for 13 series, Fry was not essential to the success of the show. But there’s one group of people that is: the QI Elves. The Elves are the ones behind the scenes — researching, writing, and producing — and without them, the show could not go on.

In 2014, some of the Elves got their chances to shine. Dan Schreiber, Andrew Hunter Murray, Anna Ptaszynski, and James Harkin began making the podcast No Such Thing As a Fish, with other Elves and occasional guests making appearances. Episodes are occasionally recorded before a live audience, but they’re frequently done in the QI offices. In December 2014, it won the Best New Podcast category at the iTunes Awards, and it’s twice won the Internet Award from Chortle. In 2015, they released the first year of podcasts on vinyl (yes, vinyl), through Alcopop! Records.

The show’s introduction is usually delivered by Dan Schreiber, a comedian and producer who was born in Hong Kong, moved to Australia as a child before eventually ending up in the UK. This has given him an interesting accent, which apparently renders him incapable of pronouncing the “Covent” in Covent Garden where the QI offices are located. In addition to being one of the original Elves, Schreiber (with John Lloyd and Richard Turner) created the Radio 4 show The Museum of Curiosity.

He opens each episode by explaining the premise: quite simply, that “we’ve gathered around the microphones with our four favourite facts from the last seven days and, in no particular order, here we go.”

He’s not joking: that’s all it is. One of them explains a fact and the others ask questions before riffing with their own (usually) related facts. These links dive deeper into the original fact, or branch out from a seemingly unimportant detail. For example, a fact about the world’s smallest football league leads to a fact about endangered bees, then to one about a not-quite-real war between the Netherlands and the Scilly Islands, and finally to a lesson on helicopters and distance. Eventually, Andrew Hunter Murray brings it back round again by saying, “I do have a fact about the longest and shortest things in the world since this was about the smallest league of football, but I’m afraid it’s about the world’s largest penis.” Anna Ptaszynski mutters, “Oh God,” but he’s allowed to continue. (It’s only two inches shorter than the world’s smallest man.)

Murray is also a comedy performer (on his own and with the Jane Austen-themed improv troupe, Austentatious) and writes for satirical magazine Private Eye, hosting three series of its podcast, Page 94. His voice doesn’t sound like Schreiber’s. In fact, the vocal distinctions were among the many things reviewer Miranda Sawyer liked: “Actually, all of the four featured elves speak in a different way, which is useful. Too many podcasts are populated by people who sound alike and laugh the same” (“No Such Thing As a Fish Podcast Review”, The Guardian, 23 March 2014). Each host brings their very different backgrounds (and voices) to the table, along with their similar humour and love of knowledge.

Anna Ptaszynski, who has a woman’s voice because she is a woman, contributes a nice dose of sass and sarcasm; I swear sometimes you can actually hear her rolling her eyes. She also claims a disdain for and ignorance of social media (which inspired the #getAnnaonTwitter hashtag). James Harkin, QI Head Elf, appears to be a walking, talking encyclopedia — perhaps it’s just his delivery, but he seems able to immediately clarify or expand on any fact, which allows him time to throw in some occasional sauciness.

I’m one of those comedy panel show fans who wants to believe that all panel members are great chums in real life and are just naturally hanging out together while someone happens to be there recording. Actually, I insist on this belief, despite factual evidence to the contrary. However, with No Such Thing As a Fish, these folks do seem to sincerely enjoy each other’s company, which makes it feel like we really are just listening in on a really good chat.

Harkin first got involved with the others when he was working as an accountant in Greater Manchester and frequently posting on the QI forum. This led to his being invited to London and becoming part of both QI and The Museum of Curiosity. He claims Schreiber was one of the few people in the TV world who was friendly to him, and they began hanging out together outside of work as well. Schreiber explains, “Having a friendship based on telling each other interesting stuff means it’s impossible to have a boring conversation. If there’s a period of silence, out of nowhere I or James will go, ‘Did you know there are 600 people in the world with two penises?'” (Adam Jacques, “Dan Schreiber and James Harkin: How We Met”, The Independent, 19 December 2015).

All four of them share this enthusiasm. Though clearly they know the four main facts in advance, they also manage to astonish each other with additional information. They explained the showmaking process last year:

Before every show, we’ll send around our headline facts — the ones you hear at the top of the show. We’ll go over them, make sure they’re true (especially if they’re Dan’s) and see if they’re interesting enough. When we have four headline facts we really like, we go away and do our own secret homework on them, and don’t tell each other what we’ve found out. So once we’ve started, we are genuinely surprised, because we’ve normally got four completely different sets of information (“Ask Us Anything”, Reddit, 11 February 2016).

There’s also a lot of teasing, which provides much of the humour but is always good-natured. The frequent butt of the joke is Schreiber, due to his self-admitted gullibility. He’s quite into UFOs and relishes conspiracy theories, but the other three don’t let him get away any nonsense. He sometimes gets befuddled, which can be beneficial for listeners, just in case we too have trouble following an explanation (though, unlike Schreiber, most of us probably know where our calves are and how long 300 miles is). His confusion also keeps the podcast from feeling smug, which was an occasional complaint about QI under Fry’s reign. During a discussion about the universe, Schreiber acknowledges the joke:

Harkin: Of all the life forms in the universe — let’s assume there are others — it’s pretty unlikely we’re going to be the smartest and you know what happens when smarter so-called communities reach less smart communities…

Murray: Yeah, the less smart ones get pushed around.

Schreiber: I personally experience it every week on this podcast.

However, he also gets his own back. Explaining how a Florida librarian ran a scam with a fake library card, Schreiber said, “It was just him trying to be a bit cheeky about keeping the books without costing the library anything, but unfortunately it was seen as illegal, and he’s now in jail for life.”

“What?” Murray exclaims (and I use the word deliberately because you really can hear his shock). The others burst into laughter, realising he’d been fooled by Gullible Dan.

All of them get their turns at being teased. When Murray reads out a quote about cicadas that said “They don’t bite — they just sing and scream as they look for sex before dying,” Harkin butts in with “That’s your Tinder profile, isn’t it?” (Given the often freaky and/or gross descriptions in their facts, the Tinder profile joke has made a few appearances.)

A lot of the information they share does seem unbelievable, but it’s important to remember that it is a factual podcast. Some of the early episodes came with their own web pages with links to sources and further reading. The Elves frequently give references and source recommendations and, if anything seems problematic, they provide disclaimers. In one episode, Ptaszynski shares some incredible things about Leonardo da Vinci, but admits that she’s not entirely convinced and asks listeners for verification.

The following episode begins with her confession: “We fell for a hoax” — her source was a hoax book “full of lies, cruel lies, that were then repeated after biography, after book, after history magazine, throughout the decades solely for the purpose of making me look like an idiot.” Her apology is genuine, because the Elves take facts very seriously.

It’s hard to give an accurate picture of the facts, because they cover almost everything under the sun. I’ve learned about history and politics (Lyndon B. Johnson installed a special shower in the White House that fired an intense jet of water directly at his penis); medicine and science (early humans had spiky penises); literature and art (in Roman Libya there was a bas relief of a phallus with legs and its own penis ejaculating into a disembodied eye to honour fascinus, the power of the divine phallus).

Note: it’s pure coincidence that the facts I first called to mind are all penis-related.

Given that these are the same researchers who work on a show about being quite interesting, all the information, regardless of the topic, is indeed fascinating (a word that comes from fascinus, Ptaszynski assures me). The banter and laughs only add to the fun, which is why by its second year, the podcast had over 700,000 subscribers, and the Elves were offered the chance to do a television version as well.

No Such Thing As the News debuted in May 2016, and its only format change was that the four primary facts were connected to the week’s news. Thus, its appearance was quite basic: the four Elves behind a desk with microphones (one viewer compared its look to that of a hostage video). However, the television version’s popularity (and possibly its low cost) led to a second series, which aired last autumn and included a special US Election episode.

The TV show brought in a new audience, but diehard fans of the podcast were also pleased that it stayed true to its original formula. Now we just had a visual as well as audio experience. While they occasionally showed a picture or video of the fact being discussing, the real benefit of being able to watch was seeing the genuine reactions to the shock and silliness. Conveniently for international fans, all episodes of No Such Thing As the News were made available on their YouTube channel shortly after their original broadcast on BBC Two.

No Such Thing As a Fish celebrated its third birthday in March, and I wish them many more episodes of both the podcast and television show. Being clever and funny is difficult enough, but being able to do both while avoiding unnecessary flash really illustrates the brilliance of the concept and the talent of the cast.

Enjoy No Such Thing As a Fish through iTunes.