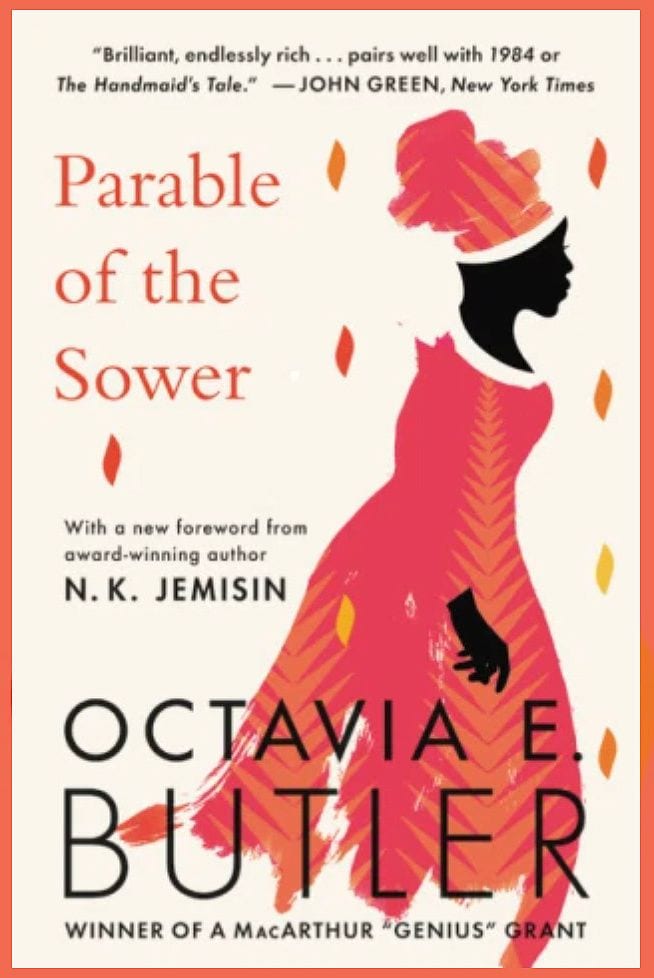 Lauren Oya Olamina grew up behind a massive wall. Yet, in her dreams, she is teaching herself to fly.

Among the many literary works which take place during pandemics, Octavia E. Butler‘s Parable of the Sower may not come first to mind. In the novel’s speculative future, horrific ecological destruction, political unrest, and quotidian violence have led to food scarcity, water shortages, and disease, which, while widespread, predominantly affect communities and characters of color.

According to the novel’s African American protagonist, Lauren Oya Olamina, “there’s cholera spreading in southern Mississippi and Louisiana… There are too many poor people—illiterate, jobless, homeless, without decent sanitation or clean water” (Butler 53). As with the current COVID-19 pandemic, pathogens in Parable of the Sower are concentrated in communities suffering from various forms of institutional racism, such as divestment, discriminatory lending practices, and redlining.

What follows is an examination of the ways that capitalist firms in Parable of the Sower respond to pandemics in ways that disproportionately exploit and harm individuals and communities of color. By privatizing the commons and resurrecting “new” forms of debt slavery, international corporations and agricultural conglomerates in Parable of the Sower exploit the labor of those who cannot afford their protection: Indigenous peoples and people of color.

In the novel’s 11th chapter, Lauren and her neighbors learn from a radio program that the residents of coastal Olivar, California, agreed to sell their town to a corporation, transitioning from a public into a private geography. An international corporation named KSF—through “much haggling, suspicion, fear, hope, and legal wrangling”—purchases the municipality and privatizes all aspects of community life (Butler 119). While those rich enough to live on the coast also experience desperation in the face of economic volatility, working-class communities of color are often more vulnerable and less equipped to weather the financial woes that accompany pandemics.

Although “parts of [Olivar] sometimes crumble into the ocean” due to climate change, the fact that the town is “an upper middle class, white, literate community” means not only that KSF deems Olivar worthy of its protection, but perhaps also that it fears Olivar’s white citizens less than the people of color in Lauren’s neighborhood (Butler 118). Lauren’s father, Reverend Olamina, believes as much: “Robeldo’s too big, too poor, too black, and too Hispanic to be of interest to anyone” (Butler 120). KSF may not be interested in the land Lauren’s family occupies, but the company is interested in exploiting a cheap labor force rendered exponentially more desperate by pandemics and their aftermath.

While listening to this radio program, Lauren and her neighbors learn “that KSF was looking for registered nurses, credentialed teachers, and a few other skilled professionals who would be willing to move to Olivar and work for room and board” (Butler 120). Although KSF seeks professionals, by offering jobs that don’t pay cash but provide only housing and food, the corporation sharpens and sets a debt slavery trap. KSF hopes to exploit the dire need for food, water, and shelter experienced more severely by communities of color.

In the novel’s diseased future, corporations use the excuses of economic downturn, political upheaval, and ecological disaster to exacerbate existing wage disparities along lines of race and gender. This leaves workers of color fewer options for financial security than their white counterparts, particularly in privatized spaces where white people already occupy the best homes and people of color are offered company housing and rations in lieu of a living wage.

While KSF’s offer alone may not constitute debt slavery, Lauren realizes that “when you add everything up, it’s clear that with the six of us, [our parents] couldn’t earn enough to meet expenses” (Butler 120). If the room and board promised by KSF cannot alone provide what the Olaminas need to survive, and if living in Olivar means surrendering their access to cash in an economy already reeling from a pandemic, then such a move becomes an inevitable descent into debt slavery and indentured servitude.

Through careful attention to the intersectionality between dying ecologies, disease, and structural racism, Butler exposes the ways capitalism’s desire to feed itself eclipses humanitarian responses to pandemics. When revenues plummet as a result of crises pathogenic or ecological, corporate leadership often closes ranks and cuts costs. Framed in economic terms, such moves appear logical and even necessary, but to view a humanitarian crisis through the lens of capitalism is to disguise the fact that those who are the last to gain rights are often the first to lose them.

Later in the novel, Lauren barely escapes with her life when ” pyro addicts” murder her neighbors and burn her neighborhood (Butler 153). Though she is separated from her family, Lauren manages to find two of her newly homeless neighbors, and together the trio begin walking north in search of a better life.

Along the highway, the group’s numbers grow as Lauren offers vulnerable, isolated individuals and families the protection of a group and begins teaching the elements of her “Earthseed” religion, based in part on self and communal care (Butler 1). Practically all of these pandemic refugees which Lauren encounters have experienced some form of capitalist exploitation or racialized slavery.

Among these vulnerable ones who find protection within the burgeoning Earthseed collective are Emery Tanaka Solis, who is half Black and half Japanese, and her daughter Tori, whose father is Mexican. Emery was forced into a marriage by her mother in order to escape “victimization and starvation in the streets”, and though she and her husband found farm work, “the farm business was sold to a big agribusiness conglomerate” which paid unfair wages in “company scrip, not in cash” (Butler 287-8).

Emery’s situation deteriorates further when her husband gets sick and dies, which plummets her and Tori into a period of debt slavery: “According to laws which may or may not exist, people were not permitted to leave an employer to whom they owed money” (Butler 288). Faced with the seemingly insurmountable economic losses which accompany pandemics, farm and factory owners in Parable of the Sower desperately grasp at ways to protect their fortunes, which include reinstating American sharecropping. For Emery and Tori, who are doubly exploited because of their race and gender, this means indefinite terms of debt slavery. In an economy already reeling from a multi-faceted pandemic, such an entrance into cyclical debt, especially for people of color, leaves precious little room for escaping forms of racialized (and gendered) servitude.

As the group walks farther north in hopes of finding arable land and jobs paying cash, others who Lauren suspects are also escaping slavery join the collective, and conversations turn to ubiquitous forms of neo-slavery sanctioned by the federal government. Emery passes along stories she heard working the fields with other women: “Sometimes jobs like that are the only jobs—slave or slave driver… Workers make things for companies in Canada or Asia. They don’t get paid much, so they go into debt. They get hurt or sick too” (Butler 323-4).

When wages no longer provide a means for escaping debt, work becomes a trap, and the inevitability of that trap closing down disproportionately on people of color partially defines Butler’s critical aesthetics. By examining historical narratives and the patterns they project into and through the present, Butler imagines futures as horrific (and as familiar) as they are important.

In Imagining the Future of Climate Change (2018), Shelley Streeby devotes an entire chapter to examining how Butler teaches us to see the future through the past. As Streeby documents, Butler devoted herself to studying the past and present in order to write inclusive futures in which characters of color practice and enact their agency.

Butler described herself as a “HistoFuturist”, a term she coined to signify her identity as a “‘memory worker and historian who extrapolates from the human past and present as well as the technological past and present'” (cited in Streeby 72). Butler’s daily practice of making “angry annotations on newspaper and magazine articles” illustrates how such extrapolations are, as Streeby writes, “deeply entangled with her research on political and economic neoliberalism: the idea that individual liberty and freedom can best be protected… by strong private property rights, free markets, and free trade” (72-3). Here Butler connects such economically minded political ideology with the forms of neo-slavery so prevalent throughout Parable of the Sower in ways which interrogate responses to crises such as the current COVID-19 pandemic.

By reading into the complex maze of history and emerging on the other side with speculative futurisms that extrapolate from the material realities in the present, Butler looks at a seedling and sees a mature tree. In other words, her careful study of crises past and present augment her ability to craft speculative narratives which illuminate the intersectionality between structural racism, ecological disaster, and exploitative labor practices.

Early in Parable of the Sower, Lauren divulges her plans to leave home and walk north to her best friend Joanne, who responds to Lauren’s certainty of disaster with denial: “‘You can’t read the future. No one can.’ ‘You can… if you want to. It’s scary, but once you get past the fear, it’s easy'” (Butler 55). By ingeniously imbuing one of her characters with the same HistoFuturism which drove so much of her life’s work, Butler teaches us to learn our past, analyze our present, and read our future in order to expose the connections between systemic racism and the cyclical violence of sustained colonial capitalism.

By narrating a terrifying neo-slavery, Butler reads into a future which seems increasingly plausible. In fact, the world of Parable of the Sower is terrifying because of its plausibility. If profit and loss matter more than lives deemed “Other” by racist modes of capitalism, how can the marginalized ever escape the margins?

In this economically uncertain COVID-19 world, as in the world of Butler’s novel, workers of color are disproportionately forced into unsafe or unfair working conditions. Too often the lives of the marginalized matter less than the comfort and convenience provided by advanced global capitalism. If, however, reading Butler can tangibly shift how we navigate our pandemic present, understanding the violence of racialized labor may help us interrogate the most calcified of our capitalist paradigms.