It’s that time in August when studios are dumping out the rubbish bin and trying to pack in as much revenue as possible with the releases that they’re hoping will be quickly forgotten before the big ramp-up starts for awards season. This is usually a time of drudgery, when sloppy comedies and stupid worn out action franchises waste everyone’s time. So it comes as a nice surprise to watch a corker like Gavin Hood’s unexpectedly jarring and immediate espionage thriller Official Secrets unspool in a close, carefully calibrated way that actually grabs one by the conscience.

After a flash-forward where we see Katharine Gun (Keira Knightley) in a London courtroom, ashen and terrified, being informed about the charges against her under the Official Secrets Act, the film then takes us back in to her prior ordinary, ho-hum life in 2003. During the day, she translates Mandarin-language signal intercepts for British intelligence service GCHQ; to the movie’s credit it never presents her work as anything but the dull bureaucratic analytical grind that all the world’s spies depend on for their intel.

At night Katharine yells at the image of Tony Blair as he pontificates on the BBC about Saddam Hussein’s supposed weapons of mass destruction. “He’s lying!” She shouts in fury. “They’re all liars,” says her exasperated husband Yasar (Adam Bakri), a Turkish Kurd understandably more concerned about his uncertain immigration status than whether Hussein, the butcher of his people, is taken out.

Many in the audience will see something of themselves in Katharine’s stymied, impotent fury over her government’s actions. Unlike most of them, though, an opportunity to do something about it drops into her lap. An all-hands email appears at GCHQ from America’s NSA, asking for help surveilling the UN offices of some swing-vote nations to find some leverage for the upcoming vote over authorizing military force to remove Hussein. Stricken and sickened, she wonders what to do, then prints the email out and brings it home. As the American and British governments ramp up their campaign to sell the invasion, she finally gives the email to a friend she trusts will pass it to the right people, and then does her best to forget about it.

Official Secrets then shifts gears, in a not-unwelcome way, to a cracking good narrative about reporters on the hunt of (as their editor puts it) “a fucking great story.” Even though The Observer has apparently already taken a position on the war (they’re pro), when one of its reporters, Martin (Matt Smith, with a foxish grin), is passed Katharine’s email and starts running the story. The details of him piecing together what he can about how the Bush administration was cooking the evidence for war and bullying Blair’s people into doing the same, are less engaging than the alternately joshing and dead-serious interplay between Martin and other newsroom denizens. (This is particularly seen with a wry Matthew Goode and Rhys Ifans, the latter in full uncorked rage over the journalists marching along to the governments’ drum).

After Martin’s bombshell piece finally runs, after “Shock and Awe” was already devastating Baghdad, things circle back to Katharine. As GCHQ launches its mole hunt and the enormity of the machinery arrayed against her becomes more apparent, Katharine’s world shrinks. She compresses into a kind of black hole of gut-wrenching fear, which is compounded by the ironies that she could not only end up going to prison — even though she didn’t even manage to stop the invasion — but Yasar to be deported might be deported, as well. 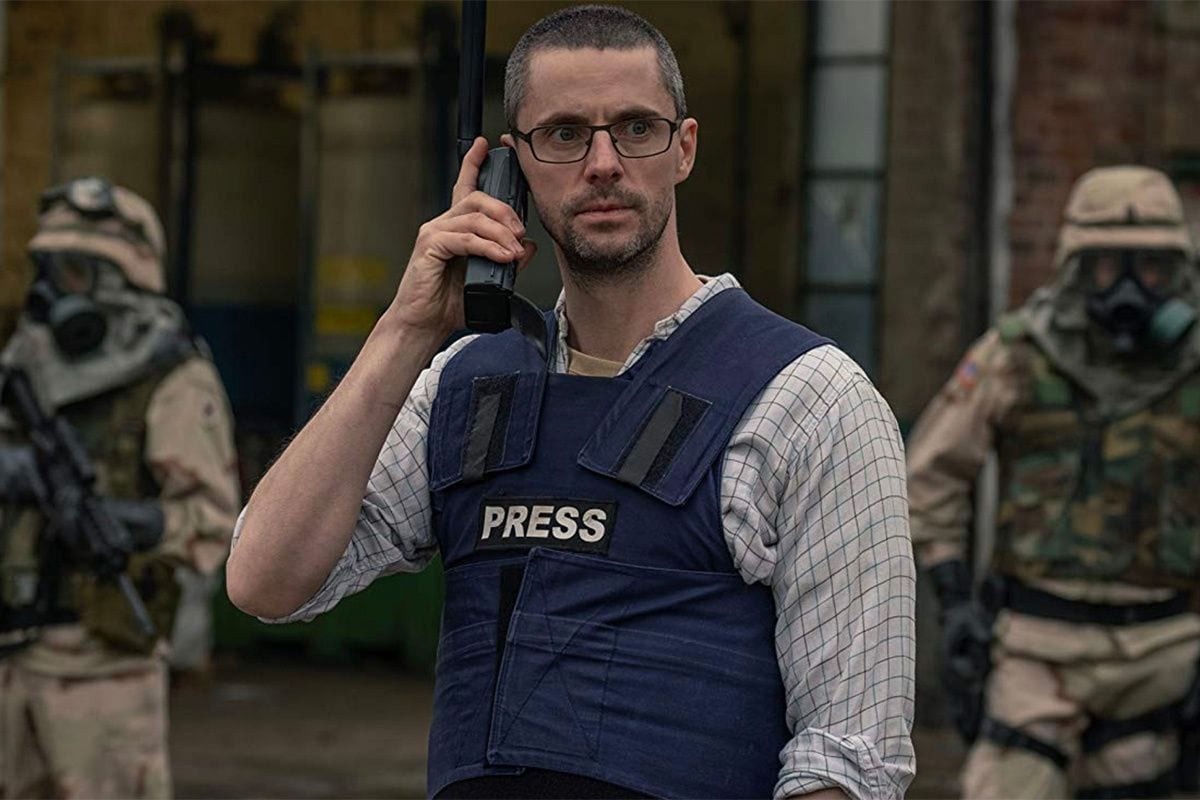 As whistle-blower narratives go, Official Secrets is somewhat by-the-numbers. Gregory and Sara Bernstein’s screenplay hits just about all the expected notes of moral outrage and tut-tutting. There is only the perfunctory examination of whether Katharine is in the right. People keep heaping praise on her for doing what they wished they could. Indeed, the deck is weighted so heavily toward her being on the side of the angels that her lawyer is played by Ralph Fiennes.

All that being said, there are many reasons Official Secrets is worth seeing. Hood’s direction is crisp and sharply dramatic, with a cool wintry sheen to the camerawork, showing that he is more at home in taut foreign-policy procedurals like this and his underrated Eye in the Sky (2016) than in the saggy blockbusters he occasionally blunders into (Ender’s Game, 2013, X-Men Origins: Wolverine, 2009). The performances are sharp and well-sold, knowing when to balance idealistic seriousness with the sarcasm of professionals doing their jobs. (Meeting a source in a parking garage, Martin wonders whether it was a little “too Deep Throat?”)

Overall, Official Secrets is a good hard slap of a reminder that two of the world’s leading democracies drummed up fake intelligence to justify an unnecessary and illegal war, and almost none of the people in any position to put a stop to it, did. That is the first tragedy which this movie reveals. The second is that now, just 16 years later, under an avalanche of other governmental atrocities, the rare heroism of people like Katharine Gun has already nearly been forgotten.