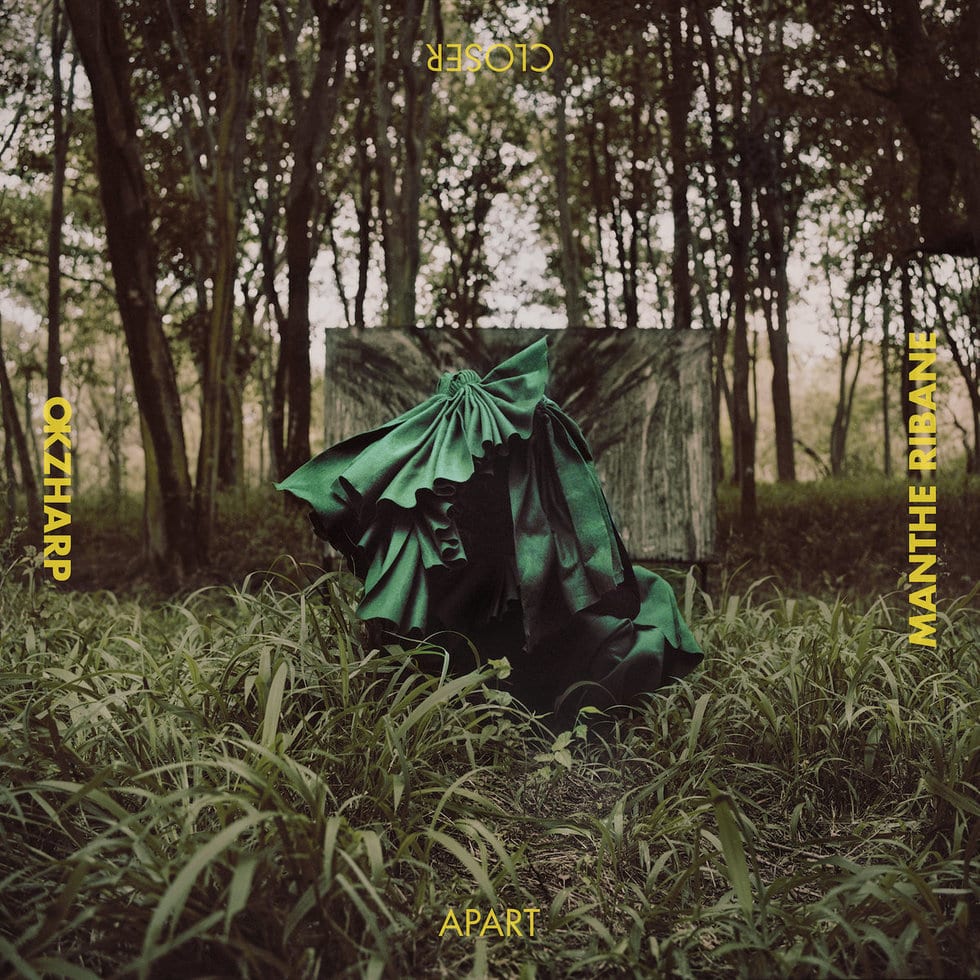 There’s a yin-and-yang quality to the way Okzharp and Manthe Ribane put together a work of art. Producer Okzharp, raised between Cape Town and London as Gervase Gordon, gravitates toward sparse, lowdown structure as the foundation of each track of the duo’s collaboration Closer Apart. Johannesburg-based performance artist and singer Ribane, whose extraordinary path has led her to dance for Nelson Mandela and Die Antwoord tours alike, brings a light and melodic sense that binds together the whole composition, growing organically through Okzharp’s mechanical wonderland. More than a matter of balance, though, Closer Apart is a show of complementary styles reaching out to each other from across an impossibly wide circle of musical possibilities and joining hands to climb higher.

Cosmic bliss and modern reality start out the album as track “W U @” cuts languid, echoing vocals with synth resonance and a distorted ringtone sample. Easy beats hit halfway through, adding a sense of action to thick atmosphere. Throughout the album, the percussion tends toward woodsy or thin and metallic to brighten slower, softer songs like “Why U In My Way” and “Blue Tigers”. Ribane works in tandem with the soundscape, and the soundscape, in turn, follows Ribane; she climbs on the beats with poise, in perfect form whether to support or in being supported. Sometimes there are conspicuous Auto-Tune tweaks her voice to better blend with the more unnatural aspects of Okzharp’s musical creations; at other points, Ribane is in full control of her pitch, and, as when she raps on “Never Say Never”, the production parts to let her stride through it.

Versatility reigns on Closer Apart; the duo incorporates dancehall as easily as dream pop. “Dun” brings quirky trap beats into play; “Never Thought” moves like heated jazz. Hard-edged “Zagga” features Ribane juxtaposing cold lists materialistic buzzwords — cash, money, Ferrari, Lamborghini, dollars, rands — beside a much more existential recitation: seconds, minutes, hours, days. Later, ocean sounds swirl around an ode to both the dangers of climate change and the potentialities of the human collective on “Tide”: “Rising, rising / We always rising,” Ribane concludes, a hauntingly ambiguous line in the double context of seas and spirits. In both cases and throughout the LP, Okzharp and Ribane look at the big picture, the small picture, and the links between the two — finding harmony in the inevitable tensions.

It’s Okzharp’s and Ribane’s mutual affinity for working together that allows them to face emptiness and build their worlds with such a fearless sense of musical exploration and innovation. Perhaps the most perfect pas de deux is to be found on “Kubona”, where a twinkling instrumental introduction leads into Ribane’s sparkling verses, all elements wound together in serenity, gliding forward on the smooth strength of both halves of the project. Ribane’s chorus here is a statement of empowerment: “I’m precious / I’m timeless / I’m endless / I’m priceless.”

Ribane hits more notes of sincere positivity as her processed voice sways through melancholy “Time Machine” with the blissful delicacy of a lullaby (“Open your eyes / And your mind / And stay steady”). The long closing track “Treasure Erasure” serves as a tribute to the time spent, both close and apart, as a partnership. “Don’t forget / Don’t forget to remember / The times we shared / They will always be my treasure,” ends the album.

The sentiments are utterly appropriate. Closer Apart is nothing if not gem after gem, an electronic masterpiece that proves that distance is no obstacle for such compatible senses of artistry. Each moment here is, though often minimally produced, fully realized. Together, Okzharp and Manthe Ribane are somehow even greater than the sum of their parts, and what they have made here promises a sonically-jeweled future.