Now on DVD and Blu-ray from Kino Lorber is a classic silent epic that hasn’t seen the light of home video since a Paramount VHS back in the ’80s.

Old Ironsides (1926) provides a colorful, patriotic, sometimes hoked-up and inaccurate account of an important and largely overlooked incident in American naval history, the First Barbary War of 1804-05, also called the Tripolitan War. This event served as America’s first “foreign adventure” and the first time an American flag was hoisted in military victory on foreign soil.

The issue: slavery and piracy. The pirates or corsairs of North Africa’s Barbary Coast had for centuries raided European ships and towns along the Mediterranean, and the most powerful European countries had negotiated treaties for protection of their shipping by the late 18th century. Smaller countries were still left to fend for themselves. American shipping had been protected by British treaties until the Revolution and by French treaties during the Revolutionary period, but after America established its independence, it became subject to the heavy paying of “tributes” to the Barbary states, either to avoid trouble or to ransom American sailors who got captured as slaves.

President Thomas Jefferson refused paying tributes and sent the newly commissioned U.S. Navy to Tripoli under Captain Preble. Even though it was actually during the War of 1812 that the U.S.S. Constitution became dubbed “Old Ironsides” for withstanding cannon fire, that nickname gets backdated for this film. It’s true that the First Barbary War was the Constitution’s first trial by fire.

This movie offers a shorthand version of the events, with emphasis on the crew of a captured merchant ship who end up escaping their shackles to participate in the big sea battle that occupies the climax. There’s plenty of time for an extremely Hollywood romance between two pretty ingenues whose characters are never named. The Boy (Charles Farrell) is a barefoot sailor who becomes adept at climbing the rigging and manning the wheel, except when distracted by The Girl (Esther Ralston), who wanders the deck in a clingy windblown dress. Between her sultry curves and the fact that The Boy and his fellow captives spend half the movie shirtless, there’s lots of eye candy here.

Old Ironsides begins with opposing speakers in Congress arguing whether to pay tribute or fight. The day is won by a demagogue who inflames the crowd with visions of white American womanhood stained by the dishonor of enslavement on foreign shores. The fact that domestic shores were already stained by enslavement goes unmentioned.

The Boy, first spotted sitting slope-shouldered on a fence in a manner intended to remind viewers of Richard Barthelmess in Henry King’s 1921 hit, Tol’able David, falls under the spell of volunteering for the Constitution, but he gets shanghaied aboard the merchant ship Esther, thanks to the machinations of the Bosun (Wallace Beery) and the Gunner (George Bancroft), who constantly fight with each other. (The Gunner has gone AWOL from the Constitution.) The Girl is a passenger, and the first half of the film is largely the rough-house comedy of the sailors mixed with moments of romance.

Very large African-American boxer Charles Godfrey plays an intriguing supporting role as the heroic Cook who eventually leads their escape from the corsairs while The Girl is marked for shame as a gift to the Sultan. In his commentary, Toby Roan quotes at least a couple of reviews that praise Godfrey as comic relief along with Beery and Bancroft, but I detect no comic impulse in his depiction. True, he complains that women are bad luck and spits through his fingers to ward off their evil mojo, but he never comes within a mile of the drunken slapstick insults and antics heaped upon each other by the other two. On the contrary, he’s depicted as much more sensible and focused.

The latter half of the film is all derring-do with cannons firing and masts breaking off and hundreds of extras swarming all over each other’s ships. One figure gets decapitated before we can see it’s a wooden dummy. Corpses are tossed overboard, and there are nice martial details such as coating the deck with sand so people won’t slip on the blood. As explained by Roan’s commentary, this was a very expensive production that used several real ships, some of which were destroyed, and combined their genuine action with judicious use of models. Two production members died in accidents, and footage from the film was used in the lawsuit over one of them. 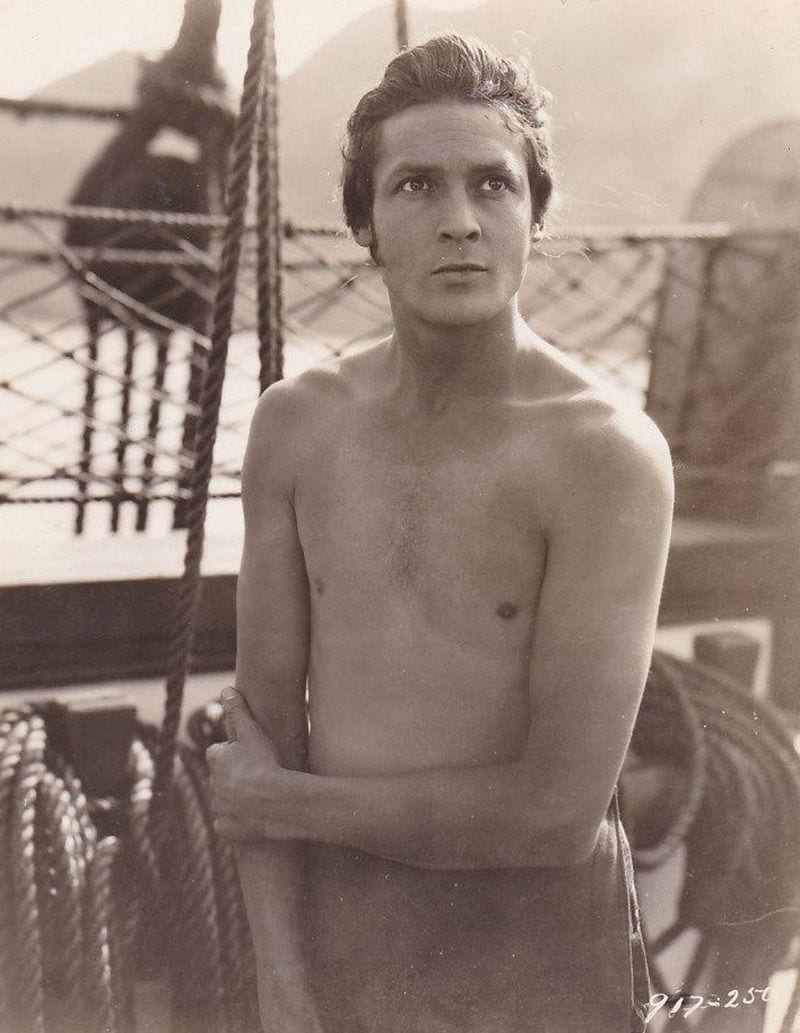 Paramount’s James Cruze was entrusted with this lavish spectacle because he’d delivered a home run with The Covered Wagon (1923), one of the decade’s first expensive historical spectacles and a certified smash. Its success led to a vogue for such expensive projects, some of which paid off and some not so much. Unfortunately, Old Ironsides falls into the latter category, as the box office didn’t match its generous critical praise. It’s possible that plenty of people went to see it but that the film’s expense needed to sell more tickets than usual.

To make the spectacle even more spectacular, the film was promoted in a new “widescreen” process called Magnascope. In fact, it was more of a “big screen” process, as certain action scenes (at the projectionist’s discretion) would simply be magnified with a special lens that projected the image onto a larger screen than usual. Nothing was actually shot or composed for a widescreen, as it was only a matter of artificially blowing up the image. The search for gimmicks was never-ending.

As a star, Farrell would soon fair better when paired with Janet Gaynor in a long series of romances, most notably Frank Borzage’s 7th Heaven (1927) and Street Angel (1928). It’s unfortunate that these major Oscar-winning films are largely forgotten, as is Farrell. He’s now remembered, if at all, for starring in the ’50s sitcom, My Little Margie.

Real historical figures appearing in the story are Captain Preble (Charles Hill Mailes) and the heroic Lt. Stephen Decatur (Johnnie Walker), who leads a successful raid to destroy a captured American ship. The doomed Lt. Somers (Eddie Fetherston) is given a heroic suicide, which probably isn’t what happened. Legendary surfer and five-time Olympic-medalist swimmer Duke Kahanamoku is highly visible as a pirate captain. With a sharp eye, you can spot Boris Karloff as the corsair who says, “Fool! She belongs to the Sultan!”

Kino Lorber provides a 2K scan of a sepiatone print from the Library of Congress. Its sometimes soft image might partially be intended as visual poetry from photographer Alfred Gilks. Rodney Sauer’s piano soundtrack is as authentic as can be, since it’s adapted directly from the original compilation score by Hugo Riesenfeld and J.S. Zamecnik, which includes snatches from “Yankee Doodle” and the Marines Marching Song when at its most patriotic spasms. In an early scene, the viewer is even invited to join a rousing chorus of “Hail, Columbia” as the lyrics and music flash across the screen. There were audience-participation stunts long before Rocky Horror Picture Show, but where is their like, now? 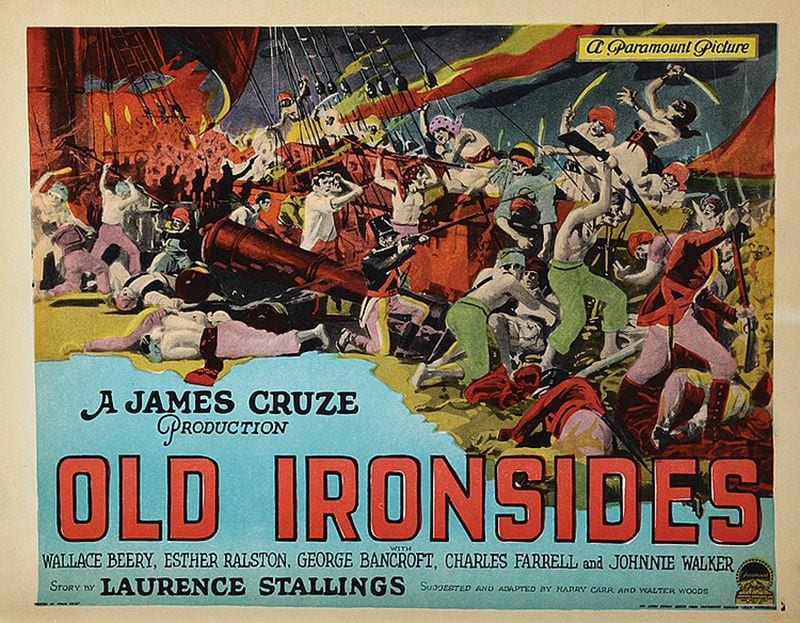