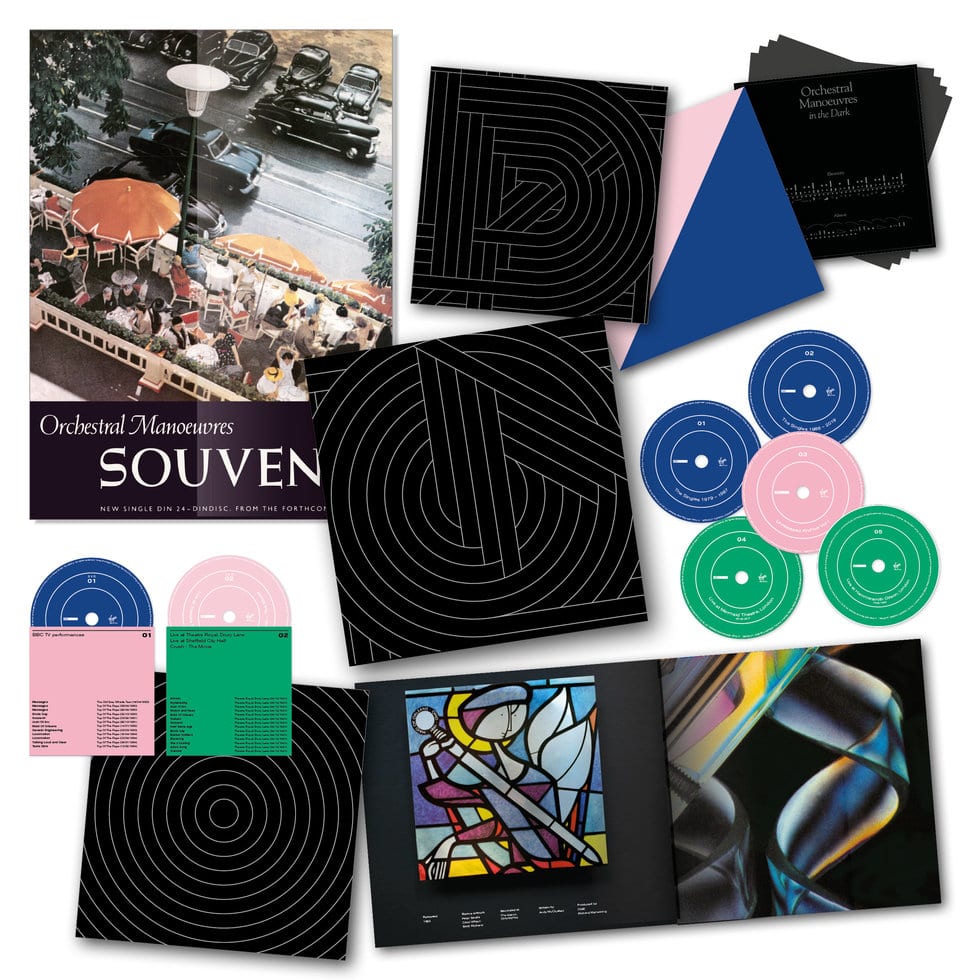 Orchestral Manoeuvres in the Dark should celebrate 40 years of existence because their career can be divided into four distinct stages. There were the visionary, pioneering early 1980s; the slicker, America-baiting later ’80s; the ’90s, during which OMD was a solo vehicle for frontman Andy McCluskey; and the current revival which followed from their 2006 reformation.

Souvenir covers it all with a lavish box set featuring each of the band’s 39 singles, a new single, a disc of previously-unreleased outtakes, two separate concerts, and two DVDs of archival television appearances, promo videos, and yet more concerts. Naturally, a coffee table-type book and other printed paraphernalia are also included. Separately, a two-disc collection of just the singles (also titled Souvenir) is available. Like most groups that have managed to stick around for 40 years, OMD have already been extensively compiled, archived, and reissued. Yet each version of Souvenir has something worthwhile to justify the expenditure.

It would be difficult to find a more consistently enthralling run of singles than those OMD released between 1979 and 1984. McCluskey and primary partner Paul Humphreys wrote impossibly catchy songs about subjects that were strange and inviting for pop music, even for the time. Song titles like “Electricity”, “Genetic Engineering”, and “Joan of Arc” speak for themselves. McCluskey chose to address the Cold War and its inherent threat of nuclear annihilation by focusing on the plane that dropped the Bomb. The whirring, paradoxically giddy “Enola Gay” is one of the most enduring singles of its era.

Crucial to OMD’s success is their ability to wring genuine emotion out of such unorthodox subjects, often with the aid of haunting, ethereal keyboard textures. From a 21st-century perspective, songs like the alienated “Messages” and coy, ironic “Tesla Girls” seem positively prescient and take on entirely new relevance. All of the pre-reunion singles have been remastered, and they have never sounded better. The synths are sharper and the low-end fuller, making the tracks well worth repurchasing.

The second half of OMD’s ’80s is often derided, not least by the band themselves. Their biggest American hit, “If You Leave”, is one of their weakest singles. Still, a sense of elegance and songcraft is always at work, especially on the sweeping “So in Love” and touching “(Forever) Live and Die”. The material McCluskey produced in the ’90s, after splitting from the rest of the band, is often mediocre and subject to some dated production, but still offers up unexpected successes like the Barry White tribute “Dream of Me”.

Since their reunion, the band have delivered a more streamlined, digitized version of their initial synthpop sound. The results have been mixed, but overall stronger than anything since those early days. “History of Modern, Pt. 1”, “Metroland”, and new single “Don’t Go” successfully capture OMD’s signature combination of pathos, atmosphere, and hooks. Less successful are not one but two different attempts to rewrite “Enola Gay”.

Clearly, McCluskey and Humphreys wanted to give fans extra material that they did not already own. With a compilation of BBC sessions and an excellent B-sides collection, Navigation, already extant, though, not much was left in the vaults. The idea of 22 previously-unreleased OMD tracks sounds enticing. But many of these are little more than sketches, snippets, and scattered ideas. Of the handful of fully-formed songs, only the Prince-like “Cut Me Down” and twinkling “Weekend” are all that notable, though fans will be thrilled to know that “Guitar Thrash” does indeed live up to its title.

The 2011 concert recording is solid and is weighted in favor of the then-current album History of Modern. Much more interesting and of better fidelity is the 1983 show in support of Dazzle Ships, which is now considered an overlooked masterpiece. Here is a chance to hear confident live versions of songs from that album as well as other excellent early-period album tracks.

For the newly-curious or those whose experience with OMD is episodic, the singles-only version of Souvenir is essential. From there, the next step is to seek out the remastered albums as well as Navigation. As for the box set itself, while it isn’t exactly essential, it is a gorgeously-packaged and worthwhile testament to the longevity of one of the great, and essential, modern pop bands.