Alexandria Bombach‘s documentary On Her Shoulders (2018) intimately follows 23-year-old Yazidi refugee and activist Nadia Murad (recipient of the Nobel Peace Prize), as she relives the trauma of surviving the genocide and sexual slavery perpetrated by ISIS. A voice for the plight of her people, she gives testimony before the UN, has one-on-one meetings with top government officials, and gives media interviews to try to compel action from the world. Supporting her are Murad Ismael, director of Yazda, a non-profit helping Yazidi survivors, and Ahmed Khudida, its deputy executive director.

On Her Shoulders is Bombach’s second feature documentary, which earned her the Directing Award at Sundance 2018. In 2015 her debut feature documentary Frame by Frame documented the work of four Afghan photojournalists to build Afghanistan’s first free press.

In conversation with PopMatters, Bombach discusses her interest in the way stories are told and how they are received, her feelings towards the negative aspects of good intentions and awareness, as well as the realistic and pragmatic way cinema can evoke change.

No, not one moment. I didn’t go to film school, but when I was a kid I filmed a lot with this little camera that I would film my friends with. It wasn’t until I got out of school that I really started to pursue it, and it was just something I was always interested in. I graduated during the recession and there weren’t any jobs, so I figured I might as well do exactly what I wanted to do versus working in a restaurant, or something like that.

While you are still in the early stages of your filmmaking journey, how do you perceive the way in which your films relate to one another?

I started out doing a lot of work in the outdoor industry, around environmental issues and things like that, and came to find a story in Afghanistan that I was really interested in. …I sold my truck, and emptied my savings account to go to Afghanistan for a few weeks to follow the story about Afghan photographers. I had seen some footage that was unedited from Kabul and was taken aback because it was just normal everyday life, and I wasn’t used to seeing that kind of footage from Afghanistan. This was back in 2011, and so I became inspired to tell a story about storytelling.

I think that experience was the start of what I’m doing even now as a filmmaker, because I’m still very interested in how we tell stories, and how we hear them. I’m interested in how journalism can be used as a tool for storytelling, and how we package stories of trauma, of victims and survivors, and how that’s coming across. So when I was asked to make a short film about Nadia, I think they thought I would be travelling to Iraq – they may have hired me because they thought I would be good to travel there because I had travelled so much to Afghanistan. But the real connection for me, the things that I wanted to talk about and explore were that Nadia tells her story over and over again, the reaction from people, and how her story can sometimes be sensationalised in the wrong way. 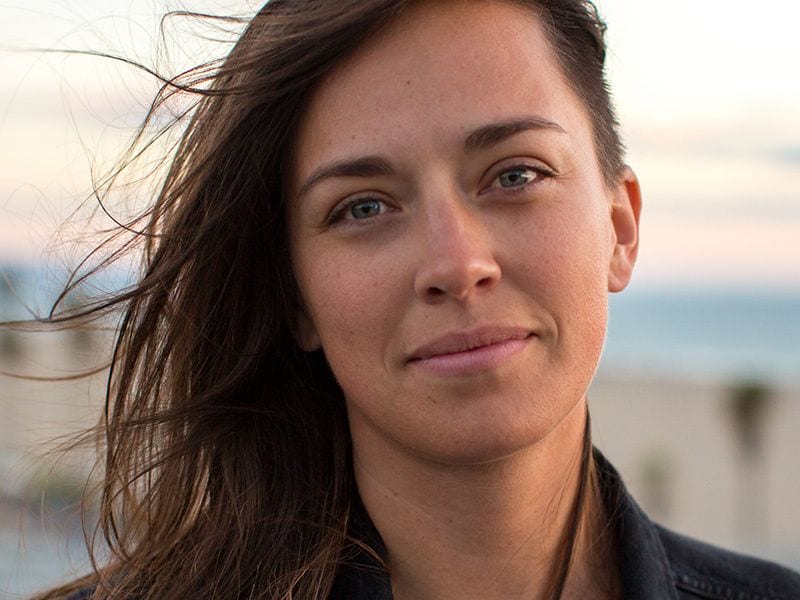 Witnessing Nadia relive her trauma, as the wheels of bureaucracy move slowly, frames the international community’s true lack of power to limit the inhumane suffering of innocents.

This was the first time that I was behind the scenes of any kind of advocacy campaign, and what was so jarring to me is, of course, just how inexperienced Nadia was, but also the team of people around her. Murad was some kind of engineer and Ahmed, I think he was a bio-physicist or something like that before the genocide happened. Immediately they just jumped straight in and dedicated their lives to this cause. That’s not something anyone can be prepared for, but the amount of things that they had to navigate, whether it was media or meetings with politicians, or the whole strategy of it all, it was just frantic and sad to witness.

You just want people to do the right thing, but you can also get caught up in all these well intentioned meetings and end up with it just being an opportunity to take a photo with Nadia. It’s frustrating, and I was distraught, I still am about how things are done, and how much they don’t get done in terms of advocacy work, or making the needle move on these issues.

It’s interesting the way in which you use narrative and storytelling. For example, with Nadia talking about her once simple aspirations, and Murad foregoing starting his own family to support her. These moments in which your subjects bare themselves are extremely powerful, affecting viewrs on a deep level that’s beyond empathy. Thinking back to your point about having an interest in storytelling, here the unrealised story of an individual ties into this deeper interest that you have expressed.

That was definitely what I was going for. The first time I saw Nadia give an interview, it was for radio with CBC in Canada, and it was the first scene that I edited in the film. It was what made me so passionate about making this into a feature because it was originally commissioned to be a short film. Seeing the questions that were asked and how it was under the guise that it was the right thing to do as journalists, to ask these questions that needed to be asked, just made me question how we are packaging and presenting victims of trauma.

So in the film it was important to me that that was conveyed, but also — and it’s really nice that you noticed this — that I was trying to show that Murad and Nadia think about the stories they wish were true. Murad talks about Nadia going back to Kojo and the story that he sees for her, and the story that he thinks she sees in a different reality. Nadia talks about how she wished she’d been a wonderful seamstress or hairdresser, not just a victim of ISIS terrorism. I think the whole film, this whole campaign for them was a story they were trying to tell the world, to want to tell the stories that they were telling themselves. 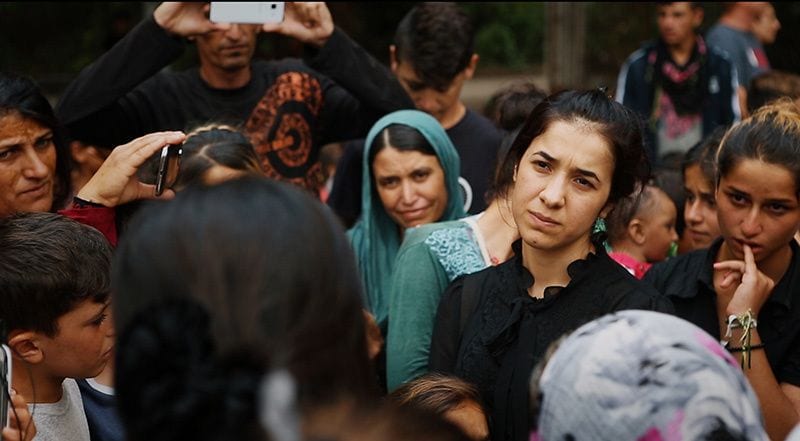 Nadia’s story intersects with the question as to how best to confront evil, and also looks at the juxtaposition of optimism or hope with trauma. On Her Shoulders is a film that’s not afraid to ask difficult and emotional questions, using Nadia as a means to branch outward into a wider discussion.

Obviously this is a difficult film to market in a lot of ways, especially after Nadia won the Nobel Peace Prize, because people think that it’s going to be a biopic. If they can go in thinking it’s going to be a film about Nadia, maybe they leave understanding it’s a film about us in so many ways, of our current state of apathy and empathy towards people who are suffering. And to just point out that even if they are good intentions, there are a lot of things that can go astray with our understanding of how we should be treating these issues.

When we question the capacity of a film to change the world and we cynically dismiss its value in this regard, we are perhaps not considering it in the correct context. Just as Nadia experiences the slow process of change as she relives her trauma, film does affect change, but it cannot be viewed as a dramatic incident. Rather, it’s the way cinema can change the perspective of an individual, which creates a gradual and less dramatic change by humanising or familiarising realities, and even the suffering that’s not our own.

It’s frustrating when people ask questions at Q&As about how this film will help. They want these more quantitive results, and it’s frustrating especially as the film has no call to action. But I think people have been trained to feel that way about documentaries, and then on the other side of it, people quote awareness as being some sort of change, which is also very disturbing. In a lot of ways awareness has become almost like a dirty word to me because it just forgives all sins.

It has been encouraging, talking to other filmmakers about how much this film has made them think critically about the way that they are telling the stories they are telling. This is very inspiring for me to hear and I’m thankful for that kind of response — how you can be changing more generally how people are approaching these topics, and understanding these issues. 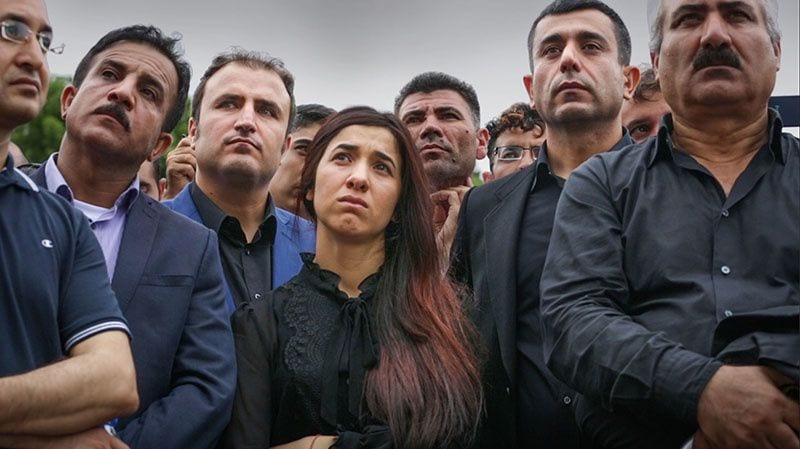 Filmmaker Christoph Behl remarked to me: “You are evolving, and after the film, you are not the same person as you were before.” The experience of entering Nadia’s world must mean that you can never go back to the person you were, representing an encounter that will continue to affect a change in you?

Yeah, this film definitely changed every bit of who I am, and I said with my first film that I thought it was just a first film kind of feeling. But I definitely agree that it’s probably going to happen every time, which is a little terrifying [laughs].

Unfortunately, my first film made me fall in love with storytelling, the power of it, and Afghanistan is not a place where you feel a lot of hope for the future. But you can’t help but be hopeful for Afghanistan.

On Her Shoulders definitely exposed me to a lot of different realities that made me pretty pessimistic about the future, and how humans are and might always be. It has been a little more difficult because in a lot of ways this film has made me feel depressed about the current state of our empathy for other humans. I think [this film] will definitely have an effect, and change how I tell stories for the rest of my life, but also change me at my core.