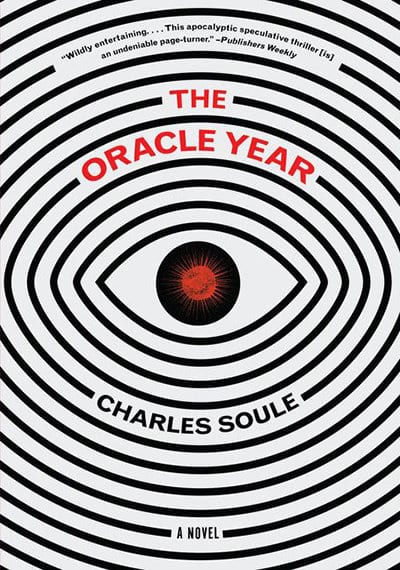 Thoroughly average Will Dando wakes up one morning with 108 predictions in his head that turn out to be true. The Site, where Will shares his premonitions as the Oracle, becomes a sensation, sweeping the nation (and the entire world), and soon enough, everyone with a stake in the game wants a piece of the pie. As a less-than-successful musician living in New York City, Will, taking advice from Hamza, his financially-minded best friend, agrees that the next logical step is to monetize the Site. But it turns out that telling investment firms about the future cold snap in Florida has infinitely cascading effects, working like a Rube-Goldberg machine or Lorenz’s butterfly to create consequences neither Will nor Hamza could have foreseen. The leaders of the world’s major religions respond with alarm as they see their power and influence waning on a daily basis; charlatans and warlords gain followers and prestige by pretending that they are, in fact, the Oracle; rallies for and protests against the Oracle turn into destructive riots.

The Oracle Year, Charles Soule‘s debut novel, starts with an incredibly promising premise and, for the most part, that promise is borne out in the rest of the narrative. (Although beginning the book with Will lusting over a random girl in a bar who promises to sleep with him if the Jets win doesn’t exactly put it on the right foot.) More driven by the propulsive plot than by particularly developed characters, The Oracle Year doesn’t just focus on Will and Hamza (and Hamza’s wife Miko), but jumps around the United States to delve into how the appearance of the Oracle affects different aspects of American life, allowing Soule to make wryly hilarious assessments of American institutions. For journalist Leigh Shore, the Oracle is her think-piece ticket to the big leagues. For hypocritical preacher Hosiah Branson, the Oracle is the ultimate enemy—not to God, mind you, but to his influence on American government.

Perhaps the most realistic element of The Oracle Year is the extent to which such a mysterious figure who inspires both worship and fear would become the primary concern of the American government and military apparatus. (See also Zack Snyder’s 2013 film, Man of Steel.) Naturally, the fictional President can’t have a rogue character like the Oracle out on the loose, with no knowledge of the Oracle’s allegiances (if they exist at all), especially when he’s about to run for re-election. The ugly task of trying to find someone who’s managed to make themselves untraceable via technology who can also seemingly bring down empires falls to Anthony Leuchten, the throughly unpleasant chief of staff. In a series of interactions that feel almost Wag the Dog-esque (Barry Levinson, 1977), Leuchten agrees to hire the Coach—the only person who has the means and connections to find the seemingly unfindable Oracle. Described as a Bea Arthur-looking grandmother with unlimited resources and quiet, menacing power, the Coach is actually the most intriguing character in The Oracle Year, and a triumph of knowing just how judiciously to use backstory: anything Soule could have written about how the Coach became the Coach would have lessened her incredible mystique.

The other characters, sadly, don’t pique the same amount of interest, although Miko, a schoolteacher with nerves of steel, makes more of an impression than protagonist Will Dando. There may simply be too many characters for viewers to get invested in (e.g.,Will, Hamza, Miko, and eventually Leigh), and even those characters seem sketched-out at best. The secondary and tertiary characters are colorful on the surface, but ultimately are there to move the pieces of plot around. Indeed, the fatal slip-up by one of Will’s tech people feels entirely manufactured to allow the Coach and company can eventually track down Will through the Site. You’d think a well-paid consultant whose job is to make the owner of the Site untraceable would not use a recognizable personal signature in her programming. Similarly, Will’s foolhardy choice to be interviewed on camera (using a fake name) during a rally for the Oracle seems like a narrative excuse to bring Leigh into his orbit early on so that she can be called up again later on.

The effectiveness of the jumping-around, intertwined narrative style also rests on the complexity and finesse each section is given, and there’s a lot of variation in quality. The blistering corruption of the chapters with Leuchten and the Coach makes for an alternately amusing and chilling indictment of the deals our leaders make behind closed doors, with the arm-twisting maneuvering Coach accomplishes to get the electrical grid shut down coming across as frankly frightening. But the sections with Reverend Branson suffer from a lack of subtlety. It’s one thing to condemn American evangelicals for professing faith and worshipping money with all the grace of dropping an anvil on your head. It’s another entirely to have one of your novel’s villains quite literally explain that he, and everyone in his church, are liars and fakes.

The narrative is divided into four sections corresponding to the four seasons, giving a temporal sense of how quickly—and slowly—everything seems to unfold during the titular year. Once you learn that Soule is primarily a writer of comic books, the pacing in The Oracle Year begins to make a lot of sense; considered all together, The Oracle Year feels almost like an omnibus collection of volumes of a comic book series. Most notably, towards the end of the novel, the chapters end on such dramatic cliffhangers that it almost seems a shame that they’re then resolved in the next few pages. I could easily imagine a serialized The Oracle Year leaving readers scrambling and desperate for the next issue to come out, lining up outside their local comic book shop in droves. But in a work of fiction that’s meant to flow together cohesively, the continued pattern of dramatic cliffhanger leading to a plot twist or bombshell reveal gets a little wearying after a while. I will say, though, that Leuchten’s and the President’s last-ditch attempt to convince Will to surrender to them is pretty ingenious.

There’s a reason wanting to know the future has never been on my list of superpowers I’d like to have: as portrayed in The Oracle Year, being given that kind of knowledge is a curse in disguise. Will becomes worn down and guilt-ridden until the story picks up for the big climactic ending, where Will must use the foresight he’s been given by some fluke of fate to save himself and his friends. In a world where a real-life person demonstratively knows the future, is there room for belief in a higher power that you can’t see? The Oracle Year is less concerned with exploring the ethics of having that kind of power and more with using it as a catalyst for an entertaining story, which The Oracle Year ultimately is.