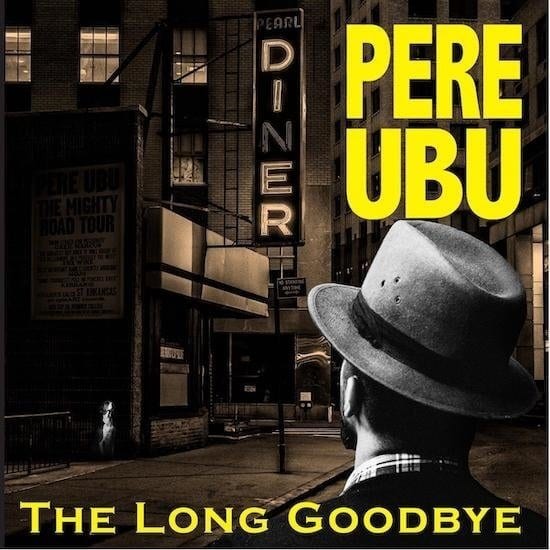 In anticipation of the release of The Long Goodbye, Pere Ubu’s 17th studio record, David Thomas announced that not only would this would be the band’s final record, but also it would “wrap up every song and story that Pere Ubu has been telling in different ways for the past 40 plus years”. Putting aside the fortunate fact that the health problems which initiated Mr. Thomas’ preparations for the end of his recording career have reportedly improved to the point that this might not end up as the band’s last statement, The Long Goodbye is an amazing achievement that accomplishes its mission of encapsulating a 45-year career with wit and aplomb.

In its way, The Long Goodbye not only encapsulates the message of Pere Ubu but also sums up the rise and fall of the great American Golden Age myth.

For David Thomas, America’s primary literary genre is the crime novel, hard-boiled or noir, and its primary literary character is the rootless, restless traveler always mixed up somewhere between observer, instigator, and investigator. Specifically, Thomas has cited Raymond Chandler and Jim Thompson, the respective masters of each subgenre, throughout his career, and both haunt the proceedings here like shadows on the wall.

From its opening notes, Thomas is in full prophet mode, defining, predicting, riddling, and judging, and he begins his tirade full of condemnation on “What I Heard on Pop Radio”. In Thomas’ world, calling something pop music is not a profanity, but he has strong expectations for what pop music should do. Thomas has in the past expressed obsession over “the perfect pop song” (nominating “Surfer Girl” for that honor at one point), but what he hears occupying our current airwaves is a non-stop disappointment, a parade of “emotional garbage” sung by “baby voiced gangsta dreamboat[s]” and “bearded toff[s]”. Pop music has the potential, like any fiction, to tell us great truths about ourselves, but instead, the current breed simply sells products and misguided fantasies. “You want real?” Thomas asks, “No, you don’t”, evoking Jack Nicholson’s famous “You can’t handle the truth” tirade from the overblown A Few Good Men.

The opening song sets the theme for much of this album, an examination of the boundaries between the real and the fictional and an inquest into how those boundaries blur to such a point that the source of truth itself becomes uncertain. Thomas’s ode to Raymond Chandler, “Marlowe”, emphasizes this gray area with him reminding the fictional character that “You’re not human tonight… not human at all”. Yet for all of us spellbound by Chandler’s fiction, we know that the human characteristics that the writer paints into the character are certainly real. As with all great fiction, we respond to what is real within the fantasy. The fiction helps us to understand reality better, in some ways, than we can frame it within the real world. Certainly, it is many fictions which guide the creation of the American identity, from its founding as “a city on a hill”, to the “first Thanksgiving”, to Washington with his cherry tree, and on and on. These fictions make us feel better about ourselves and justify the persecution of those who would question the American Dream. As a prophet, it is Thomas’ job to show us our future as embedded in our present moment.

“Yesterday haunts all your tomorrows,” he sings in “Flicking Cigarettes at the Sun”, reminding us that we are rarely truly engaged in the present, in the real; rather, our warped visions of the past are the distorted lenses through which we view our world. Here, we find ourselves in Bay City, Raymond Chandler’s stand-in for Santa Monica and, ironically enough, the fictional location of the long-running soap opera Another World (and also the title of the 2000 album by David Thomas & the Foreigners). Here, with Thomas we are absolutely in another world, and it is ending. “Fare thee well, Los Angeles”, Thomas bellows, and we know it is not the goodbye of someone leaving a place, but rather that place is leaving us. Thomas joins himself with the late 1960s Angelino apocalypses of Phil Ochs (“The World Began in Eden and Ended in Los Angeles” and Arthur Lee “The Red Telephone” and pretty much all of Forever Changes). As the song crashes to its halt amid the synthesizer washes of Gagarian and Robert Wheeler, this could be the sound of sand, as the waves wash away each grain from under our feet.

America is a land of truck stops and all-night diners that form Stations of the Cross for the private passions of the perpetually lost and searching souls traveling America’s existentially endless highways. We’re all on the long walk (drive) home; we’re all passing through Ohio; we’re all slouching towards Los Angeles to be born. In “Road Is a Preacher”, Thomas amplifies this sense of American restlessness, of perpetual motion, of our need for travel and escape. “Land is a teacher,” he sings, “Road is a preacher” harkening back to “Electricity” from Raygun Suitcase (1995) where he noted that “The stones speak the language of our fathers”, wherein landscape itself as the great American narrative. But there’s more. “Bye-bye, baby,” he sings, “it’s time that I am gone”, and now we’re back to the Elvis undertones of Story of My Life‘s (1993) “Heartbreak Garage” and our journey “down Mystery Road”. American reality is all about reinvention. Goodbye old world! Hello, new world! Every day is an apocalypse!

But “Who Stole the Signpost?” Thomas asks with his next song. It’s a prophetic riddle to which he already knows the answer. There are no signposts because everything is a signpost. “Where Artifice is King,” he sings, “the Abstract is the thing.” We’re all still searching for the Big Rock Candy Mountain, the depression era heavenly dream of the hobo. We may no longer be hopping trains, but we remain restless, rootless, and perpetually in search of something better, some new narrative where the playing field is level and opportunity is available if you show up and work for it. Meanwhile, we dream our little dreams and carve out our fantasies to stave off the boredom, like hobos carving a new image onto a nickel. And Thomas’ songs are so many hobo nickels, turning the common and mundane into something singular and visionary, and sometimes even sinister. Just like the speaker in “The World (As We Can Know It)” observing more and more, understanding less and less, and so creating his own vision of reality, walking amongst us unseen except by accident, a Monster Magee damned to become the subject of sea shanties and ghost stories.

“I like to speak from other places that don’t exist,” Thomas explains in “Fortunate Son”, because where is the real when we live in a world where Waffle House holds equal iconic weight to Walden Pond? The song hints at the central lesson Thomas himself has learned as a restless traveler of America’s highways, spoken just before the album’s great on the road song commences: “Places that don’t exist have something in common: They’re real. / Places that do exist aren’t so real after awhile.” America was once an ideal, and all the more real for it. Now, 300-plus years in, truth and reality are compromised; they have become an entertainment commodity bought and sold by the media priests of the big lie. Thomas, narrating the voice of “the Last of the Americans” takes us on a road trip across the continental divide in search of meaning amidst waves of radio static, driving on past repeated teases of a rewarding final destination (“Satisfied City Exit 1 Mile”) only to find himself once again in Bay City, that fictional American paradise by the sea, “where all travelers must come to a Separate Peace / or be swallowed up.” One can almost hear Tim Buckley singing “Once I Was” as Bruce Dern walks naked into the surf.

We find ourselves in a would-be seaside paradise, but the soothing pop sounds of the Beach Boys are curiously missing from this Surf’s Up California dream. Instead, we hear Thomas singing in the voice of Captain Beefheart’s shanghaied sailor from Trout Mask Replica‘s “Orange Claw Hammer”. That latter record, too, is a masterpiece of California pop, but it, like so much of Pere Ubu’s work, is a deliberate and mad outlier. Don Van Vliet, more than any other musical figure, can be said to have provided the blueprint for David Thomas, but where Van Vliet retired to the desert and his painting, Thomas continued to explore America’s dry, dusty interstates and its sonic highways. The student surpassed his master long ago.

First pressings of The Long Goodbye CD include a bonus disc, Montreuil, which features a stripped-down Ubu unit (Thomas, Keith Moline, Gagarian, and Christ Cutler) performing the songs before a live audience in France (for only the second time they’ve been played). The recording is a true gift to fans and provides incredible insight into the album.

Thomas has said previously that “an album is a moment in time, it is not a destination or a terminus”. He is talking in context about the perpetual need to improve the vision as opportunity and technology allow, but the quote also fits this particular performance of the new album in a moment in time. Here, the band is presenting the material to a physically present audience who are working to understand the material simultaneously to the band, themselves still in the process of envisioning and understanding their vision, producing that vision in the moment. If this is the end, then Montreuil is The Apocalypse of Saint Ubu, the recording of the vision of the end at its moment of creation. As with all good literary apocalypse, it is both practiced and spontaneous, a vision embedded in history but of the moment.

Montreuil opens with one of Ubu’s earliest songs, “Heart of Darkness”, which Thomas describes as “a Raymond Chandler pastiche… every good line in that song was stolen from him.” By opening with this song, Thomas amplifies his claim that The Long Goodbye “wraps up every story and song” Ubu has given us, as does the band’s other choices for additions to the album’s setlist. Their one cover, “Running Dry” by Neil Young, which originally appeared on Everybody Knows This Is Nowhere, serves to underline the apocalyptic mood, and closer “Highwaterville”, which originally appeared on Ubu’s Pennsylvania, offers a short apocalyptic riddle to end it all. We find ourselves, in the words of the late, great chronicler of Los Angeles and other mysterious worlds Harlan Ellison, “face-down in Gloria Swanson’s swimming pool”. Paradise was always a trap. The American dream is a fiction containing all the wrong truths. Arthur Conan Doyle once posed “The Final Question”: David Thomas has devoted his artistic life to answering with a final solution.

Is there such a thing as “The Great American Novel”? There is an argument to be made that David Thomas, over 45 years and with assorted collaborators, has been writing that very thing and that The Long Goodbye is its final chapter.