The summer concert landscape is filled with major weekend-long festivals that make the 21st century a great time for live music. Although ever-increasing inflation on pricing often makes it necessary to choose carefully on where to invest. But several regional one-day festivals provide strong value for weekend music mavens. The Petaluma Music Festival in Northern California’s Sonoma County is one of these events, with the 12th annual edition again tapping into the Bay Area’s rich pool of talent for an appealing day out at the Sonoma-Marin Fairgrounds on the first Saturday of August.

“Keeping music in the schools” is the festival’s motto and higher purpose, with proceeds going to fund music programs in the town’s elementary and secondary schools. That makes the festival one of the most altruistic ways for local music fans to spend their entertainment dollar. This year’s headliner Animal Liberation Orchestra is a longtime California favorite, selling out the Fillmore every February on their annual Tour D’Amore. The music starts in the noon hour for those who are really in it to get the most bang for their buck, while the hot Sonoma sun leads others to trickle in throughout the afternoon. By the time the clock hits 2:45 pm, the festival is in full swing with the difficult dilemma of competing sets on different stages from Magic in the Other on the Petaluma Stage and New Monsoon on the Lagunitas Stage.

Magic in the Other has been delivering one of the freshest sounds in the Bay Area since their formation in 2017, a trio led by drummer Ezra Lipp with bassist Steve Adams and guitarist Roger Riedlbauer. The band’s vibrant sound blends a jazzy jam-rock aesthetic with meaningful songs that dare try to confront the chaos of the current era, while also offering uplifting vibes for a spiritual revolution to overcome society’s current struggles. While first gaining acclaim as a player with Phil Lesh & Friends, Lipp has since made a mark as a talented songwriter and bandleader in his own right as evidenced on Magic in the Other’s debut album What We Know Is Possible. Dynamic songs with thoughtfully inspiring lyrics like “How Is This All Ending”, “Thin Veil”, and “Light in My Window” have quickly become fan favorites.

A surprise highlight here occurs when Magic in the Other busts out a debut rendition of the Who’s “Pinball Wizard”, once again demonstrating their talent for providing fresh takes on classic rock gems (such as their takes on David Bowie’s “Starman” and Soundgarden’s “Black Hole Sun”). The band is putting out a lot of energy here. It’s a good thing that Lipp and Adams will have some time to rest up before pulling double duty later on with Animal Liberation Orchestra, where Adams is the longtime bassist and Lipp has become the new drummer over the past two years.

A certain synchronicity occurs just minutes later as New Monsoon continues to rock across the fairgrounds with their own bustout of the Who’s “Eminence Front” to amp up the afternoon. In contrast to Magic in the Other, New Monsoon has been rocking the Bay for more than two decades although their appearances have become somewhat sporadic in recent years. So it’s great to see core members Jeff Miller (guitar), Bo Carper (guitar) and Phil Ferlino (keyboards) rock out before a good-sized crowd of “Storm Chasers” on a sunny summer day like this. Miller has got chops to burn, and there are few bands who can rip hot jams on Santana and Allman Brothers tunes like New Monsoon, while also delivering soaring originals with great harmonies. Miller and Ferlino have also been frequent players in the Friday night Top 40 band at Terrapin Crossroads in San Rafael, where they’ve helped the club develop a reputation for delivering the best bar band in America on any given night.

The action moves to the main stage with the Mother Hips, another guitar-driven regional favorite that’s been rocking the Bay Area (and the nation) with their own blend of psychedelic Americana since the early ’90s. Guitarists Tim Bluhm and Greg Loiacono have kept the band going through trials and tribulations, including Bluhm’s fairly recent brush with mortality when he was hospitalized after a speed flying accident. The band always seems to find a way to keep rocking on though. Here the hot sun becomes a challenge to the crowd’s energy at times, while the band seems to be searching for the sound on some of their newer material. The sound clicks into place for one of the festival’s peak moments though on Loiacono’s “Del Mar Station”, one of the Mother Hips’ classic tunes that epitomizes their skill for blending sweet vocal hooks with edgy guitars and big grooves.

It’s here near the main stage where fans can also take part in a silent auction for various musical memorabilia, as well as a guitar raffle where just a few bucks gets a chance to win signed guitars from the likes of Chris Robinson, Ryan Bingham, or Animal Liberation Orchestra.

The David Nelson Band hits the main stage next and the group is cooking from the start on a 90-minute set that puts the festival into high gear. From collaborating with Jerry Garcia in the early ’60s to becoming a founding member of New Riders of the Purple Sage, Nelson has counterculture cred like few others. With a power trio core that plays together in three bands — guitarist Barry Sless, bassist Pete Sears and drummer John Molo also play together in both Moonalice and the Green Leaf Rustlers — the David Nelson Band is always ready to cut loose and let the jams fly as they do here early and often. With keyboardist Mookie Siegel rounding out the quintet, the band brings a higher level of musicianship the stage every time out as they back Nelson on his signature blend of Americana, psych-rock, jazzy blues, and cosmic country.

Sless and Sears have developed particularly strong chemistry, seeming to dare each other to take sonic leaps higher and faster as they spur each other on during jams that really get the audience going. Another jam on “Iko Iko” ignites an energetic dance party as the band takes the simple groove for an extensive ride with Sears pumping up the low end.

Then it’s back over the the Lagunitas Stage where longtime bluegrass stalwarts Hot Buttered Rum are cranking out a high energy sound of their own. The local Lagunitas Brewery from right here in Petaluma has become a major national force, and here they augment some of their standard selections with 2019’s new Phase Shift, a juicy hazy IPA that really hits the spot on warm summer evenings like this. It’s a good one to wash down the jams here because Hot Buttered Rum is cooking too, with their patented blend of bluegrass instrumentation and good time rock ‘n’ roll. Singer/guitarist Nat Keefe, ace banjo man Erik Yates and company are joined for much of the set by guitarist James Nash, who helps the band rock out in a big way on the Cars’ “Just What I Needed” as the classic rock hits keep coming throughout the day.

By the time Animal Liberation Orchestra hit the main stage for their headlining set at 8:00 pm, it’s getting dark and the temperature is starting to get a bit brisk. But the band quickly warms things up with a groovy set of feel-good jams to ignite the night. Upbeat jams on “Try” and “Get to Do It Again” get the set off to a hot start, with keyboardist Zach Gill singing of “living the dream”. Bassist “Good Time” Stevie Adams takes the lead vocal on “Rain”, a song with more of a sunny disposition about the cleansing power of the rain to wash the blues away.

The band has moved into a “2.0” era over the past couple years with the dynamic Ezra Lipp stepping in for original drummer Dave Brogan, but here fans get a special treat as Brogan makes a special guest appearance to conjure the best of both worlds. Keyboardist Zach Gill introduces Brogan midway through the set, relating a tale of meeting him for music lessons and then starting the band at the second lesson. Brogan then takes a seat at the keyboards while Gill plays the frontman role on “Girl I Wanna Lay You Down”, followed by Gill displaying more of his multi-dimensional skills on ukulele for Animal Liberation Orchestra’s classic “Plastic Bubble”. 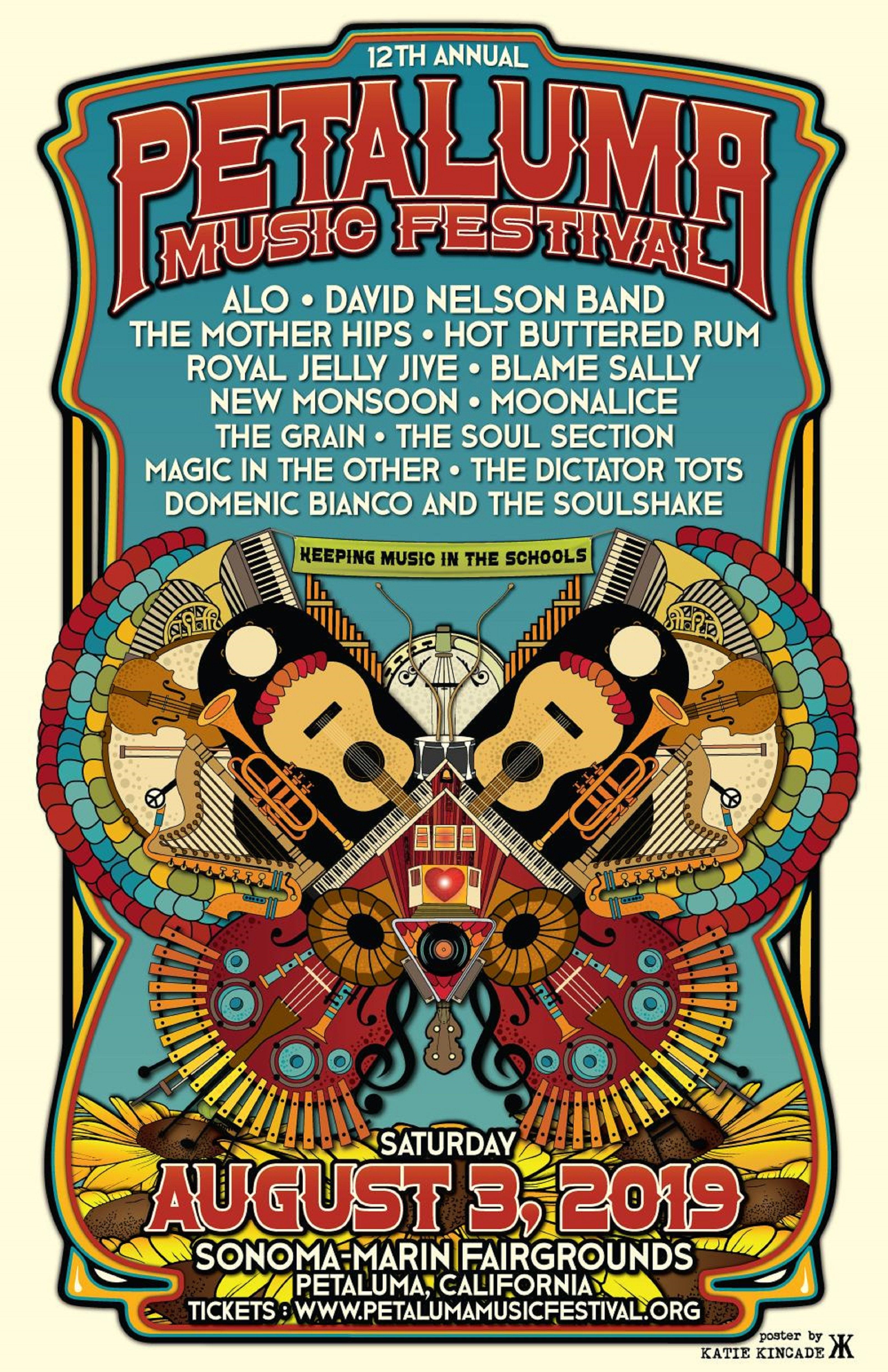 Adams, Gill and guitarist Dan “Lebo” Lebowitz have longtime chemistry that seems to just keep on growing, augmented perhaps by the chemistry that Adams and Lipp have developed with Magic in the Other. The band gets into a hot jam on “The Ticket”, conjuring a soulful ’70s funk vibe that has the audience getting down. The group is really gelling now, with the collective sound adding up to what seems more than the sum of the parts. Animal Liberation Orchestra wraps the festival with a big encore jam on their classic “Shapeshifter”, including a surprise melodic instrumental jam on Guns N’ Roses’ “Sweet Child of Mine”.

The festival has delivered more than nine hours of music while raising somewhere in the neighborhood of $60,000 for local music programs (if last year’s haul is any indication). The Petaluma Music Festival has also grown to become one of the Bay Area’s most reliable days of musical fun in the summer season, no small accomplishment considering how much is going on in the region on any given summer weekend.