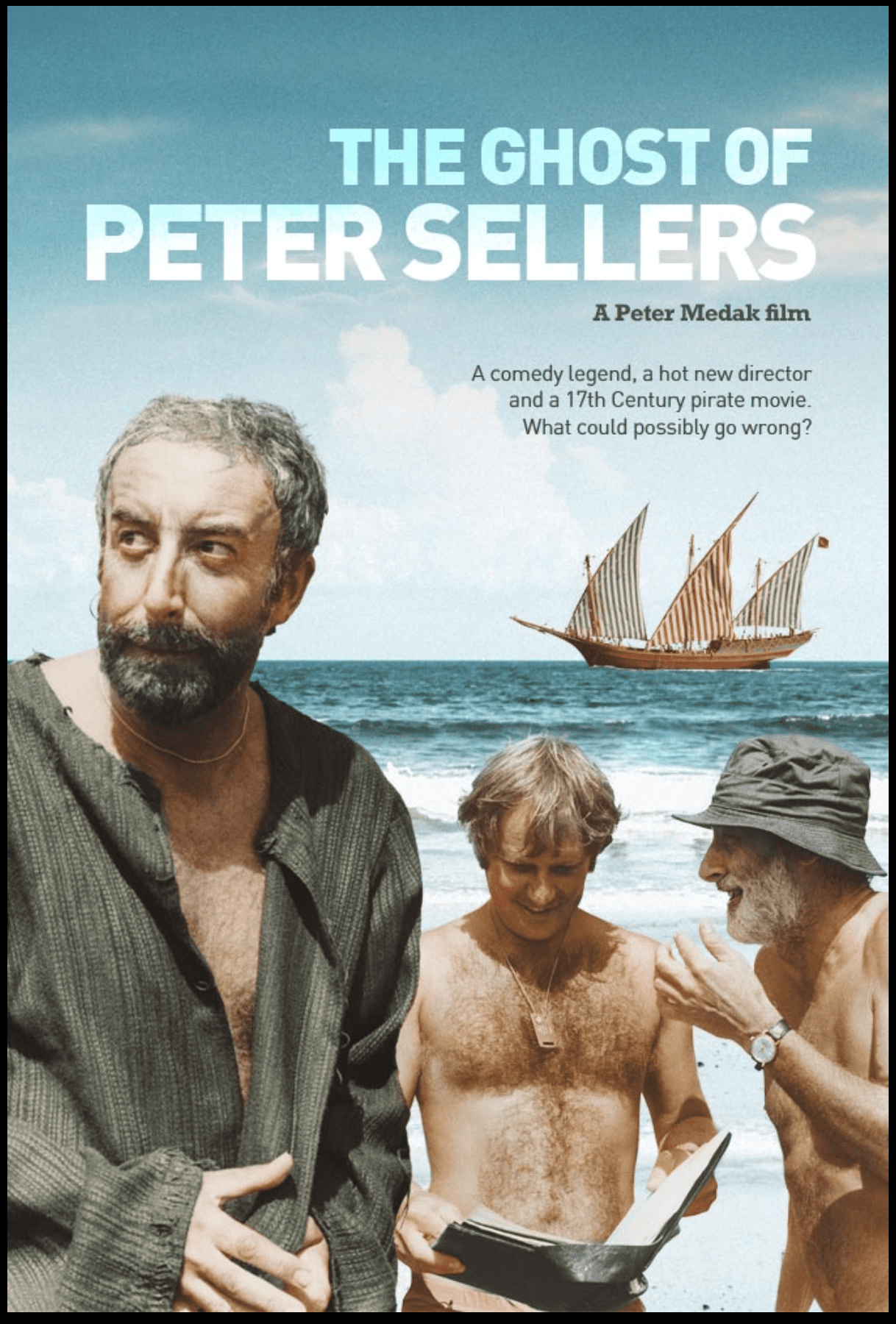 In a better world than the chaotic yet circumscribed one we are currently stuck with, there would still be video stores. They would be staffed by underpaid, emotionally underdeveloped, and over-opinionated clerks. Those clerks would curate shelves with their personal picks and microscopically specific sub-sub-genres (“Blind Detectives”, “Parent-Child Switcheroos”). Somewhere there would be part of a shelf devoted to the truncated but crucial list of movies about movie productions that went off a cliff. Bahr and Hickenlooper’s 1991 Hearts of Darkness: A Filmmaker’s Apocalypse would be there, of course, as would Pepe’s Lost in La Mancha (2002), Blank‘s Burden of Dreams (1982), and Tan’s Shirkers (2018).

But would Peter Medak’s The Ghost of Peter Sellers make the cut? On paper, it hits all the genre highlights: comically disastrous production woes, money problems, bad vibes on the set, impending sense of doom, and at least one bona fide maniac. But if it was included, that clerk would most likely do so grudgingly, to fill out space. Again, it’s a small genre.

When Medak signed on to make Ghost in the Noonday Sun in 1973, he was on a roll. The Hungarian director had made three acclaimed movies at that point (1968’s Negatives, 1972’s A Day in the Life of Joe Egg, and the rapturously received The Ruling Class). Sellers had been one of the world’s top comedic actors since kicking off the Pink Panther series the previous decade. Given Medak’s bent for dark material, Sellers’ off-kilter sensibility, and the film industry’s Sure Why Not? attitude in the post-Studio Era, the pairing makes a kind of sense. Still, the series of events that led to the two Peters being locked in mortal combat while trying to make a pirate comedy in Cyprus seems hard to fathom. Not least because it’s difficult to come up with an example of a successful pirate comedy.

The Ghost of Peter Sellers is a highly personal and somewhat airless account from Medak about an event that happened over 40 years ago whose painful memory he still seems unable to process. Walking through London and the shooting locations in Cyprus with a rotating cast of friends and former colleagues, Medak acts the part of self-investigator. He’s like a self-flagellating version of John Cusack’s Rob Gordon in High Fidelity. But instead of interviewing his ex-girlfriends about why they broke up with him, Medak is reconstructing one of the worst times of his life (“nightmare” gets thrown around a lot) and trying to pinpoint how and why his career went off the rails.

Part of that answer is simple: Sellers. The already mercurial star had just broken up with Liza Minnelli before Ghost in the Noonday Sun shooting started, and showed up in Cyprus ready to start trouble. He started fights with everyone possible, disappeared for hours at a time, stirred up mutiny in the crew, and generally behaved like some dictionary definition of a pampered Hollywood prima donna. At one point, his bickering with co-star Tony Franciosa became so heated that Sellers refused to share a scene with him, forcing Franciosa to have a fight with a disembodied sword blade sticking up through a trap door. In a move worthy of something that Klaus Kinski might have pulled on Werner Herzog, Sellers even faked a heart attack to get out of one more day playing accidental pirate captain Dick Scratcher. (Yes, that is his character’s name.)

On top of Sellers’ antisocial antics, Medak and his crew encountered one production setback after another, starting with their painstakingly constructed pirate ship sinking on the first day. There were also money problems and just every kind of bad gossip. None of this was improved by a script that everyone agreed was subpar at best. But flying in Spike Milligan, Sellers’ old

The Goon Show buddy in comedic anarchy, for rewrites and to act as the star’s security blanket, just threw more gasoline into the cinematic dumpster fire. By the time Columbia Pictures finally saw the finished product, the studio determined it was better kept on a shelf.

Many stories of Hollywood disasters can easily become morality tales where the capital sins are Lack of Preparation and Hubris. In this way, The Ghost of Peter Sellers calls to mind The Devil’s Candy, Julie Salamon’s 2008 book about how De Palma’s 1990 film, The Bonfire of the Vanities, went down the tubes through confusion, creative inattention, and a lack of any coherent artistic vision. Medak spends much of The Ghost of Peter Sellers understandably trying to come to grips with why Sellers had worked so hard at ruining his life. (While he eventually became a journeyman director, Medak’s career was brought to a screeching halt by Ghost in the Noonday Sun.) But instead of seeking an answer to the unanswerable, Medak may have done better to listen to the film’s still-spry and invitingly blithe producer John Heyman, who notes that they just should never have made the movie. Even though Medak acknowledges he mostly came aboard for the money, he seems to have a difficult time accepting Heyman’s insight.

The answer lying in plain sight all along deprives The Ghost of Peter Sellers of some of its sting. From the clips shown show in this documentary, the world didn’t miss much with Ghost in the Noonday Sun. It limped onto home video about a decade later. Sellers’ fright wig and “Oirish” accent are childrens’ TV-level hacky, the jokes broad and moony like third-rate Terry Gilliam, and once again there’s the cinematic near-impossibility of making pirates funny.

While Medak’s struggle to find meaning in it all is moving at times, this documentary would have had far more impact if the subject of all this agonizing were some lost masterpiece or misunderstood groundbreaker. Medak’s pain is wincingly real. The real tragedy of The Ghost of Peter Sellers, however, is that his memories don’t have a worthier subject.