Hallucinatory scenes painted in garish colors leap off the walls in a full-frontal assault, an impossibly layered fever dream rife with fornicating body parts, melting heads, and cartoon violence. I am at the artist Peter Saul’s first major New York show called Crime and Punishment, comprising 60 of his most overtly political works at the New Museum.

The irreverent comic-book style of MAD magazine can be discerned in his series on presidents Reagan, Bush, and Trump, their stretched and twisted bodies depicting the greed, corruption, and racism inherent to American politics. Iconic characters from the pop culture pantheon like Superman, Mickey Mouse, and Donald Duck are repurposed and deployed to subvert tropes of national pride, patriotism, and war.

Saul took a bludgeon to the refined sensibilities that separated the beau monde from the rubes in 20th century America. His 1983 painting, Art Critic Suicide, skewers the guardians of good taste by showing conservative art critics Hilton Kramer and Peter Schjeldahl as Siamese twins blowing their brains out. In 1995 he created a parody of Emanuel Leutze’s Washington Crossing the Delaware (1851), depicting the patriotic tableau as a sinking ship peopled with buffoonish characters.

Saul came to prominence in the tumultuous ’60s in San Francisco, as an outsider and troublemaker who would paint scenes of racism, murder, and misogyny inspired by the war in Vietnam amidst the parades and love-ins of flower-child culture. His war series produced a year after the outbreak of war, shows clearly the monstrous perversity of war as well as the frivolity of the anti-war movement. “I wouldn’t dignify war by picturing any actual combat,” he said. “In my mind it’s a filthy-pervert game.”

Saigon, the largest painting of his anti-war series, depicts “WHITE BOYS TORTURING AND RAPING THE PEOPLE OF SAIGON”, as the bold capital letters on the bottom left states. He deploys the visual language of cartoons and comic books to make this point, rendering both American soldiers and Vietnamese villagers as crude stereotypes to make his audience uncomfortable and force them to acknowledge their society’s complicity in the crimes. “My pictures are meant as a kind of cold shower for other people, to make them aware of their own feelings, or social skin.” (Frank) 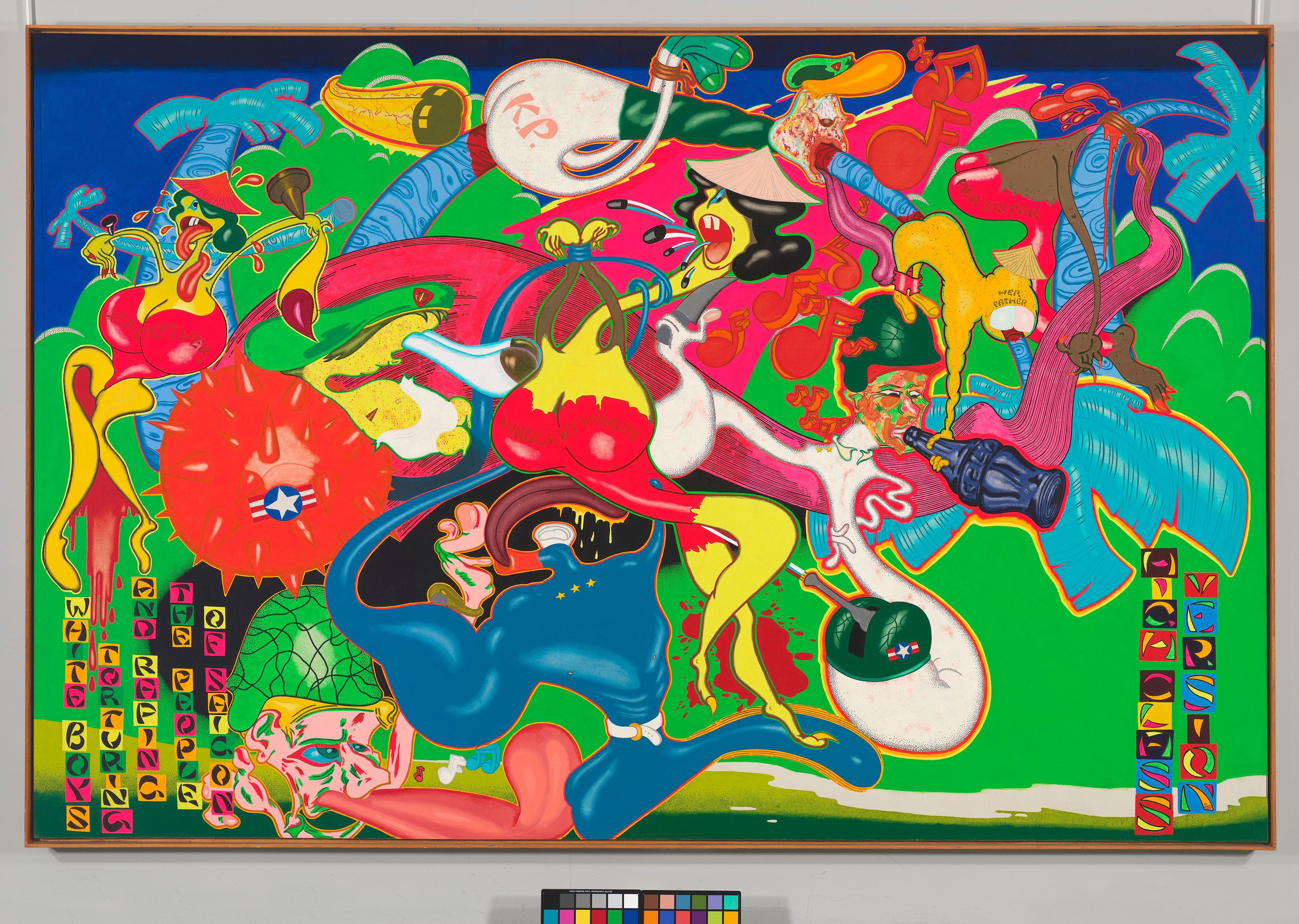 African American scholar-activist Angela Davis, who was arrested in 1970 and later acquitted for her allegedly seditious activities, became the subject of another series. In Self Defense (19659), he depicts a female Black Panther being torn apart by representatives of society and state as garish cartoon cops ogle her naked body. As in his Vietnam series, he vividly portrays the fantasies and desires of her tormentors to disturbing effect.

There’s no such thing as off-limits material for Saul. This, of course, has invariably resulted in his alienation from what he terms “the official world of Art”.

Saul’s interest in America’s voyeuristic obsessions reached its zenith with the electric chair series in which he depicts the execution of infamous figures, including the serial killer, John Wayne Gacy, and Ethel Rosenberg, a spy convicted for passing on American military secrets to the Soviets. Sex Deviant Being Executed (1964) depicts a homosexual man strapped into an electric chair, calmly smoking a cigarette as he awaits his death even as a pair of eyes labeled “NORMAL MAN” leer at him.

The inhabitants of Saul’s electric chair are used as props to satiate America’s ravenous appetite for violence and its propensity to punish behavior considered non-normative. Saul’s latest piece in the series, Jesus in Electric Chair (2004), goes one step further, featuring the Almighty electrocuting his only begotten son to entertain his flock.

Saul is perhaps at his most ruthless when he turns his withering gaze on himself. A series of self-portraits that began in the ’70s show the subject in the grips of derangement and uncontrollable emotions under the onslaught of a relentlessly hostile world. In Oedipus Junior (1983), the artist simultaneously pokes out an eye with a paintbrush, takes a buzz saw to his genitalia, and offers a drink to a female breast that pops out from his neck.

The past few years have seen an overload of political nut-jobbery and back-to-back episodes of high weirdness visited on the American people through the good offices of the current dispensation, to the extent it is becoming increasingly difficult to tell reality apart from farce. The breathless coverage of the US president’s shenanigans seems almost staged to distract from more urgent realities: grift and cronyism on an unimaginable scale, rising inequality, massive migrant detention centers and looming climate catastrophe. All of which makes Peter Saul a singularly powerful voice in the current scenario, one that can speak truth to power in its own language: loud, vulgar and outrageously offensive. 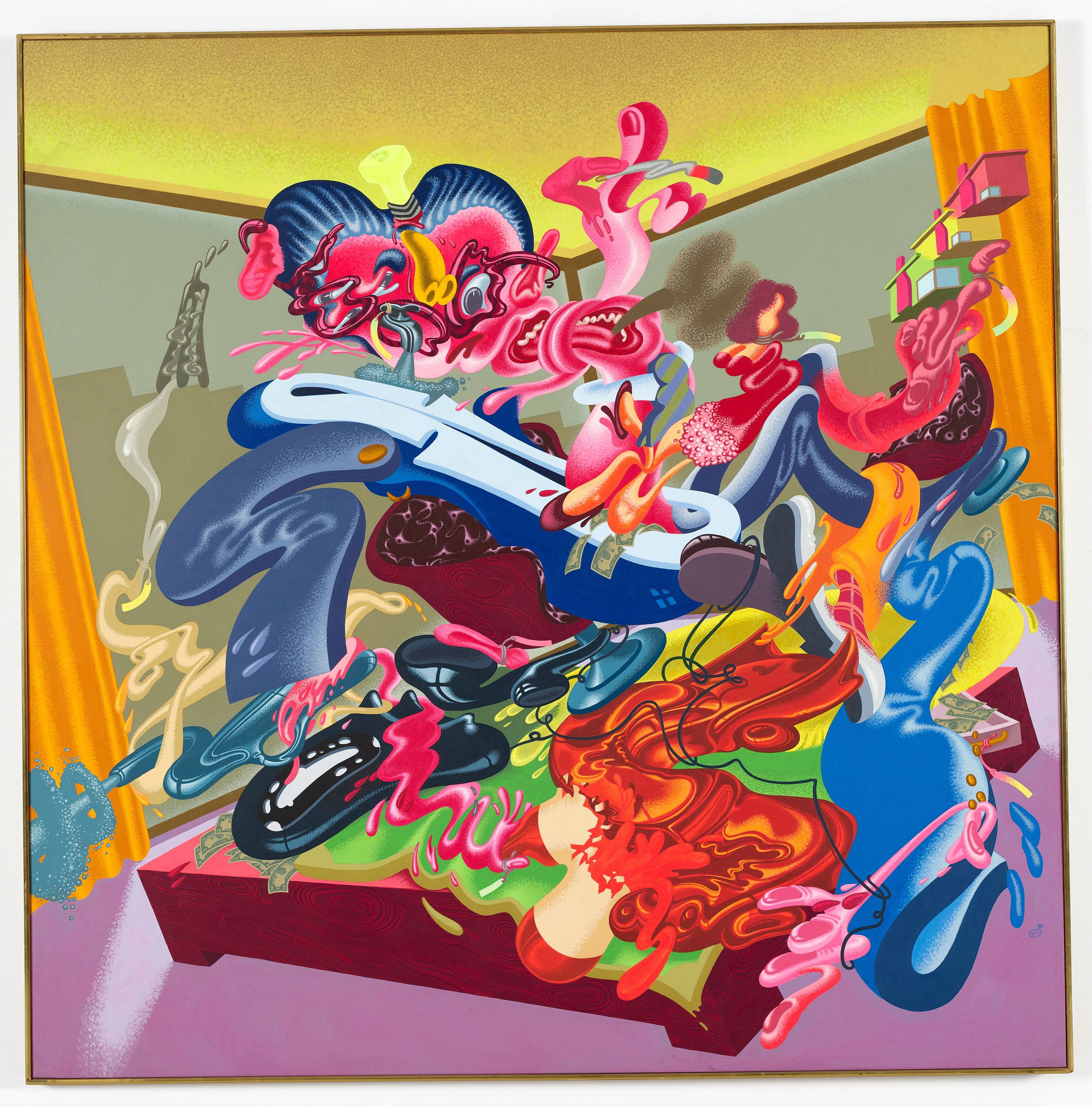 “My actual politics are just left. I try to vote as left as I can. I hope that my paintings will coincide and be far left, but frequently they’re not,” he said when asked about his political leanings. “Frequently the painting rebels and goes fascist on me. I don’t mind! I don’t mind! The painting is made up and has a life of its own. I think it up and I put it there and that’s it.” (Frank)

Yet, under the brash persona cultivated over the course of his 85 years lies a sharp understanding of the psychotic roots of institutional power. He may act like he doesn’t care, but look deeper and you will find an artist who refuses to let the bastards have their way.

Peter Saul’s work is loud, vulgar, and outrageously offensive. It’s perfectly tuned to America’s violent culture from the ’60s to life in the times of the Trump administration.

New Museum is, of course, closed during COVID-19. However, you can enjoy the Museum’s virtual tour of the Peter Saul exhibit, here: