When I find myself in the airport with extra time, I wander over to the international terminal and flip through magazines. Most of the magazines at the airport are actually American, like Vogue or Esquire, but they are presented in another language with sometimes radically different content. Because I read a lot of these magazines in English, any deviation from those standards, subjects, and practices in the foreign editions is immediately apparent.

For example, the advertising usually looks quite distinct; differences in seasonal weather between countries impact the feature content in the fashion section; some countries care more about certain film or music celebrities than other countries do. But all of these changes are recognizably within the ballpark of discourse that stems from American culture.

So when we approach the pages of Italian, British, Spanish, Czech or Hong Kong Vogue, something in them successfully bridges toward our understanding of how other cultures are “same same, but different”. But where is Iranian Vogue? There isn’t such a thing—and one is tempted to add, “of course”. In some substantive sense, Americans have given up on comprehending the fashion cultures of majority Muslim nations.

Indeed, thanks to the ravages of our oversimplified and hateful political discourse in these times, the average American makes no meaningful distinction between Muslim nations at all. Turkey may as well be Iran. Iran may as well be Indonesia. And when we are asked to conjure up an image of a contemporary Muslim woman’s fashion in any of these three very different cultures, it’s hijabs, hijabs, hijabs across the board.

Because this type of gross homogenization of Islamic nations is inexcusable and because this type of glossing of the intersections of feminism, religion and creativity is likewise inexcusable, we need to read Elizabeth Bucar‘s Pious Fashion: How Muslim Women Dress. Bucar is a professor of philosophy and religion, not a writer for a fashion magazine. Yet her style of reportage is blessedly clear and engaging, more in the manner of a sociologist or ethnographer than a pure theoretician.

The accessibility of the text is not a detriment to its rigor in any way. Although I am able to read theory and fashion magazines with equal speed, I found myself moving at a snail’s pace through Pious Fashion. Bucar’s work delivers a vast quantity of information and amusing anecdotal examples on a subject that, until now, I knew nothing whatsoever about.

A small selection of the things I used to know nothing whatsoever about: 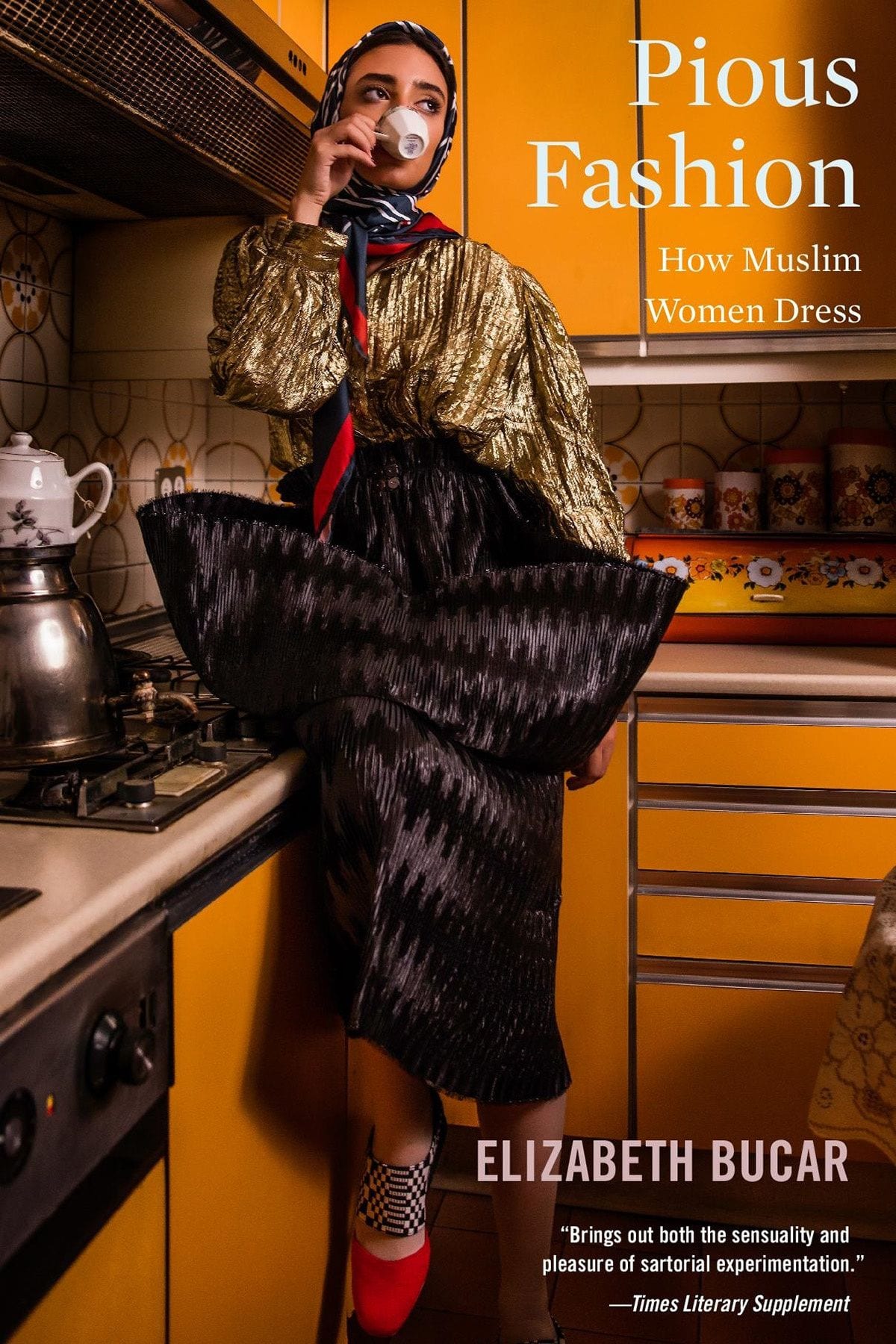 Even though it should be obvious that there is so much more to understand about the way Muslim women throughout the world dress — it’s not just millions of anonymous black and navy and beige drapery blowing in the desert wind — Americans and other English-speakers generally don’t have many resources to better their comprehension of the diversity of pious fashion. Until now.

It’s thrilling to learn of the often extraordinarily complex meanings accompanying different varieties of dress. This amazing guided voyage into fashion territory left me vastly better equipped to fall down into an Instagram rabbit hole. I can now practice “reading” some outfits using this newly acquired understanding.

Pious Fashion contains about 20 full-color photographs that help to illustrate some key concepts. Furthermore, @TheTehranTimes, recommended by Bucar, offers more than 4,000 stunning examples of Muslim women’s fashion that, equipped with my new education, kept me occupied for hours.

Bucar’s travels through Iran, Indonesia and Turkey are as entertaining as they are informative. Pious Fashion is a highly valuable book for an incredibly wide variety of disciplines. It has clear applications in most humanities fields from history to sociology to religious studies to visual rhetoric. It’s an excellent deep dive for students working in fashion or costuming, helping them achieve a more appropriately global perspective on symbolism in style.

Laypeople who enjoy fashion magazines will be thrilled, as I was, to discover this entire world of considerations that are well worth gobbling up. Pious Fashion is truly an eye-opening book. You won’t know how much you’ve been in need of it until you read the first half dozen pages.