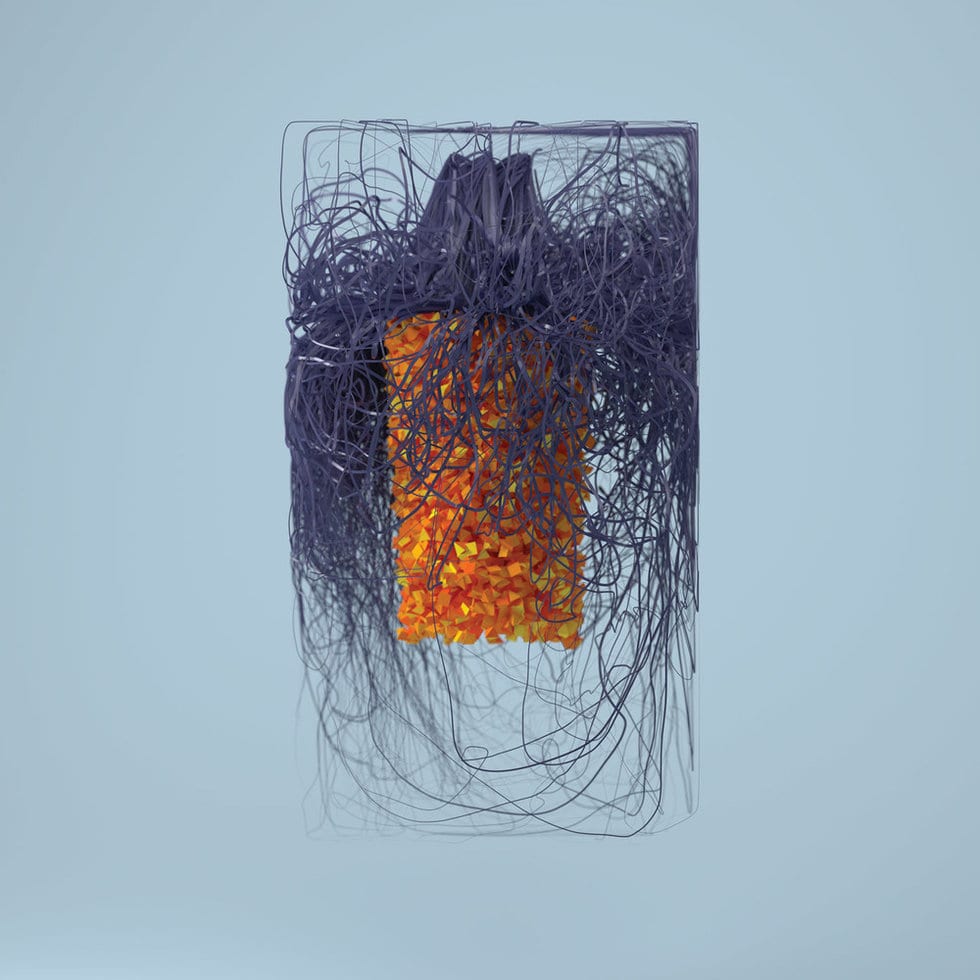 British duo Plaid have long been one of the most innovative and forward-thinking names in electronic music. Pick any album from their long career, and you’re met with intricate rhythms, glitchy IDM beats, and wonderfully cerebral diversions that seemed to toy with the very notion of space, depth and time.

New album Polymer is no different but, conversely, also a very different beast from anything they have done before. The characteristics mentioned above are still, thankfully, present and correct, but there is an edge to the album that takes the music in bold, previously unexplored new directions. Inspired by modern themes of environment, synthetics, mortality, and human connection every light, playful element is counterbalanced by something altogether darker – like black, rain clouds slowly enveloping a clear blue sky.

Opener “Meds Fade” kicks things off in thrilling fashion. Fuelled by a stomping beat, the duo fill the spaces with threatening, buzzing synths and sighed vocal loops. It’s a thumping, dancefloor-ready opener albeit one bathed in ever lengthening shadows. The fidgety, “Los” maintains the attack with razor sharp synths that slice and tear through the mix, as the pair encourage electronic chaos to reign.

“Maru” is a masterclass in layering percussion as looped, clattering beats clash with a driving, subterranean beat all held together by twinkling melodies that hold the listener under its hypnotic spell. Throughout, notes and sounds fly in and out of the mix, leaving a wispy imprint like vaper trails in a clear blue sky. On “Ops”, the steady inhalation of a female vocal sample weaves between clattering, bouncing beats before the track takes on a classic drum n bass feel. The pair sound like they are in their absolute element as they let keyboard melodies and drum patterns run riot.

The more experimental “Drowned Sea” takes the listener on a gripping sonic voyage as swelling, ambient synths cushion mechanical, percussive sounds. “The Pale Moth” melds organic instrumentation and synthetic textures beautifully. As acoustic guitar and horns tangle themselves around ambient keys and jittery IDM beats, the track morphs until it resembles the sound of a detuned, and slightly chilling, turn of the century fairground ride.

The blissful, “Dancers”, gently reveals itself as cool, oscillating synths revolve around a soft beat. Like an electrical cable with its wires exposed, atmospheric noises and sounds spark and crackle before walls of cascading synths arc between the speakers. “Nurula” takes things back to the dance floor as the pair weave in a rich tapestry of synths, acoustic guitar notes, and a strong, thumping beat. It’s a stunningly effective example of sonic plate spinning from artists with a vivid and distinctive vision.

“Recall” serves almost as “Nurula’s” more downbeat counterpoint. As dark, menacing synths clash with industrial percussion, the track slowly recoils to reveal a barren, sonic terrain underneath. “All to Get Her” and the slow-burning “Dust” meld the dark, more volatile sides of the album with lighter, unexpected flourishes. On “Dust”, for example, the rippling chords and metallic percussion rub up against a waltzing synth melody.

“Crown Shy” takes a jittery IDM beat and adds glitchy electronics and, strange as it may seem, a beautifully judged accordion figure that gradually takes center stage. Closer “Praze” finds the duo scaffolding the track from what sounds like harpsichord notes. It’s a brilliantly original way to finish an album that continually reinvents itself over multiple listens.

Polymer is a wonderfully elusive, unpredictable album that constantly surprises. It’s undoubtedly a Plaid record with knotty rhythmic detours and tricky beats that will delight fans both old and new. However, by successfully tying the tracks to culturally relevant, apposite themes, it’s also one of their most strikingly accomplished albums to date.