Two films made by female directors offer a meaningful look at the different ways one can go about depicting poverty. The first, Frozen River (Courtney Hunt, 2008), tells the story of Ray (Melissa Leo), a mother of two who smuggles illegal immigrants across the US-Canada border in upstate New York. Debra Granik’s new film, Leave No Trace (2018), follows Will (Ben Foster) and Tom (Thomasin McKenzie), a homeless father and daughter who illegally live in a public park outside Portland, Oregon.

These two movies have several things in common. In addition to their shared interest in portraying the economic, emotional, and social effects of poverty, both also benefit from remarkably perceptive acting. Leo richly deserved her Academy Award nomination for Best Performance by an Actress in a Leading Role in Frozen River. In Leave No Trace, Foster buries himself in his role with a quiet zeal that’ll leave you simultaneously awed and spooked. And McKenzie’s mature, achingly moving performance will hopefully bring her the same kind of recognition that Granik’s previous works (2004’s Down to the Bone, 2010’s Winter’s Bone) once generated for Vera Farmiga and Jennifer Lawrence.

When it comes down to it, however, Frozen River and Leave No Trace approach their common theme from vastly different mindsets. Frozen River is a message movie that continually lingers on the facile observation that “these people you see are all poor.” In part, this superficiality derives from Hunt’s reliance on needlessly conspicuous close-ups. Directors frequently speak of the importance of keeping the audience “invested” in a story, but throughout Frozen River, Hunt often turns that prescription for emotional intimacy into a strikingly – but superfluously – physical one instead.

Here’s one example of how this cinematography plays out in practice. Early in the film, we’re presented with an extreme close-up of Ray’s foot; without ever zooming outwards, the camera then slowly moves up her body and stops at her gloomy facial expression. It seems like the shot merely wishes to emphasize that Ray is unhappy and down on her luck. But the problem is that the film already indicates as much in the conventionally-framed scenes that precede and follow this shot. Images of a rundown trailer home and an abandoned merry-go-round testify to Ray’s poverty – and in a sign of her distress, she also spends most of the early scenes arguing with other people. As exemplified by its redundant opening close-up, then, Hunt’s camerawork catches our attention just so it can rehash things already illustrated elsewhere. This renders the film repetitive.

Cinematography aside, the other problem with Frozen River is its dialogue, which suffers from two major flaws. First, a fair amount of it is just exposition: instead of advancing the narrative, the script spends a lot of time either filling in backstory or explaining the ins and outs of the smuggling business. Second, almost every conversation we see explicitly references something financial, be it stolen cash, unpaid bills, paychecks, or the importance of not missing a day of work. Because of this and Hunt’s aforementioned love of close-ups, Frozen River often carries the feel of a one-note sermon. Hunt’s intentions are undeniably good – but she seems to believe that profundity arises from the constant portrayal of hardship alone, and the story is rather obvious as a result. 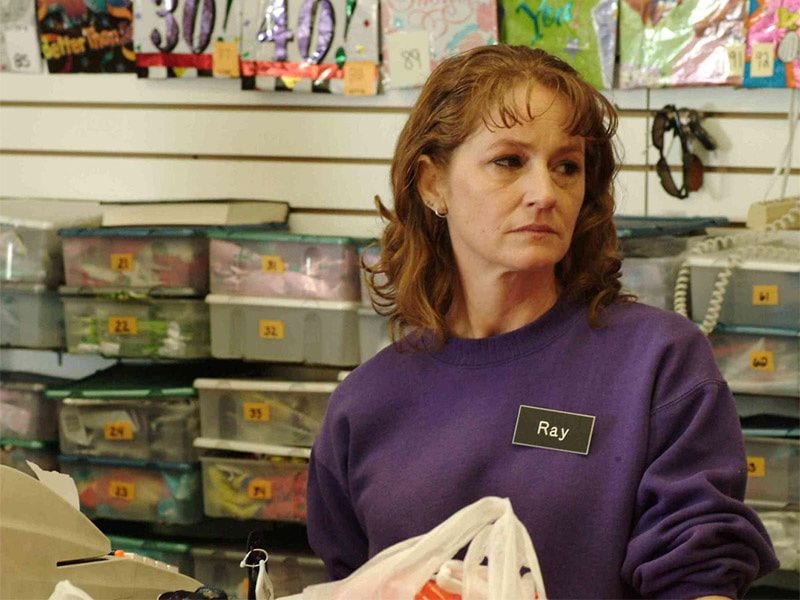 If Frozen River frequently proves heavy-handed, Leave No Trace conversely offers a master class in the art of restraint. To see what this means in practice, you can look at the way each film treats its protagonists’ poverty. Frozen River doesn’t exactly conceal Ray’s penury. At the very beginning of the movie, we watch her haggle with a deliveryman over the payment she has to make for a new mobile home, and she also gets into an argument with her son over the pitifully low salary she receives at her part-time job. Right from the get-go, this continual, upfront talk of money (or lack thereof) thrusts the awfulness of Ray’s economic condition to the forefront, thereby engendering the aforementioned “one-note sermon” effect.

Leave No Trace, however, doesn’t initially dwell on the fact that Will and Tom are poor. We’re certainly shown their meager lodgings – the tent they sleep in, the makeshift shelter they eat under – early on. But the purpose of the film’s first part isn’t to underscore the inadequacy of their living conditions. Instead, by presenting scenes in which Tom and Will happily play chess, pick wild mushrooms in lush green undergrowth, and hum “You Are My Sunshine” together, Granik channels Captain Fantastic (Ross, 2016) and its idealized depiction of a living off the land lifestyle. After Will and Tom are arrested some way into the story, a social worker explicitly calls them “homeless”, even though they adamantly reject that description – and it’s only then that the film finally seems to recognize that the two protagonists should be considered “poor”.

Here, Granik’s initial presentation of Tom and Will does two things. First, it suggests that “poor” is a descriptor that third parties impose on them: we may classify these characters as destitute, in other words, but they don’t define themselves in terms of their economic condition. Second, by taking so long to acknowledge the two’s poverty, Granik downplays their impoverishment, and her use of understatement ultimately allows her to depict their hardship without becoming as blatant about it as Frozen River. For both of these reasons, Leave No Trace‘s portrayal of poverty carries psychological insight and subtlety, two traits that Frozen River largely lacks.

Beyond their contrasting approaches to the depiction of poverty, the difference in quality between Frozen River and Leave No Trace also stems from their diverging narrative structures. On the one hand, Frozen River is built on a decidedly traditional framework. We learn at the film’s start that Ray needs to get enough money to finance her purchase of a double wide mobile home, and throughout the story, everything she does in the smuggling business serves this end. 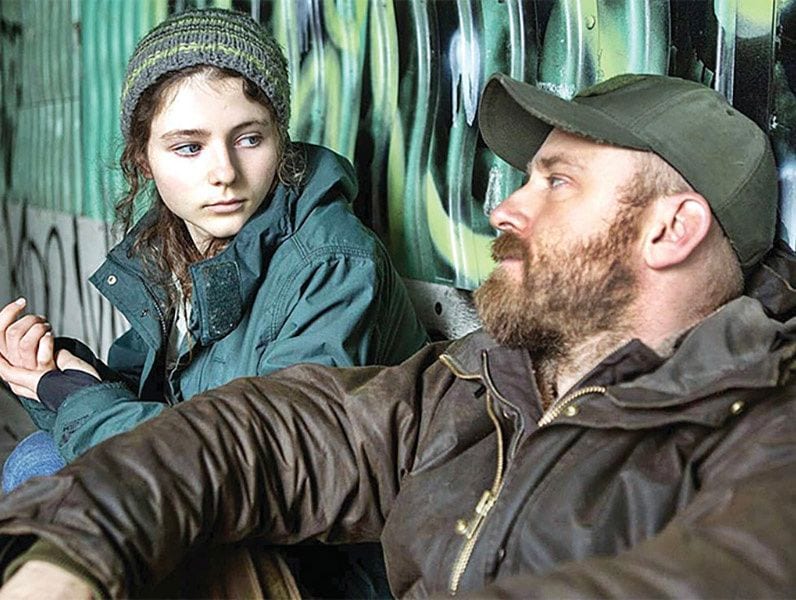 This quest narrative structure succeeds in several ways. By eliminating extraneous subplots, it makes the movie easy to follow. Furthermore, in between Ray’s smuggling runs – the parts of the film, in other words, that are “thrilling” in a conventional sense– the script also drops regular references to the “double wide”. By reminding you of Ray’s overarching goal, these references ensure that you always remain interested in the story, even when there are lulls in the action.

Despite these various strengths, however, Frozen River‘s narrative structure often feels too contrived for comfort. To take one example, it’s only on her last smuggling run (i.e., the run that’ll get her all the money she needs for the trailer) that Ray confronts meaningful legal problems. Furthermore, this run also happens to take place on the very night before she has to complete her payment on the trailer. As epitomized by this perfect confluence of circumstances, the film’s conflicts can seem manufactured, deliberately engineered to be high-stakes.

In contrast, you could say that Leave No Trace is a film in which “nothing happens”. The trailer portrays the movie as an inspirational drama about people who overcome poverty with the help of caring social workers. But in reality, Tom and Will spend most of the film either evading those workers or aimlessly wandering around the Pacific Northwest. During such wanderings, the two of them never seem to have any particular destination or objective in mind. They meet a lot of people along the way, but most of their acquaintances drop out of the storyline after a few minutes, such that these encounters don’t carry long-term narrative consequences. Neither Tom nor Will changes much either: at the film’s end, the Tom remains somewhat socially awkward but self-reliant, while Will continues to be stubbornly antisocial.

Leave No Trace tests your patience; indeed, several IMDb users have complained that it lacks “character development” and “a real story”. Yet even if it’s bound to irk some moviegoers, Leave No Trace‘s loose, anticlimactic, and meandering structure ably speaks to – and in some ways embodies – the purposelessness and muted frustration that Tom and Will feel in their day-to-day existence. Granik possesses a keen understanding of her characters’ inner worlds, and throughout Leave No Trace, she’s willing to do whatever is stylistically necessary to help her viewers relate to those inner worlds, even if that entails a more monotonous narrative. Ultimately, her structural approach helps imbue Leave No Trace with an empathy and poignant authenticity that you simply won’t find in Frozen River.