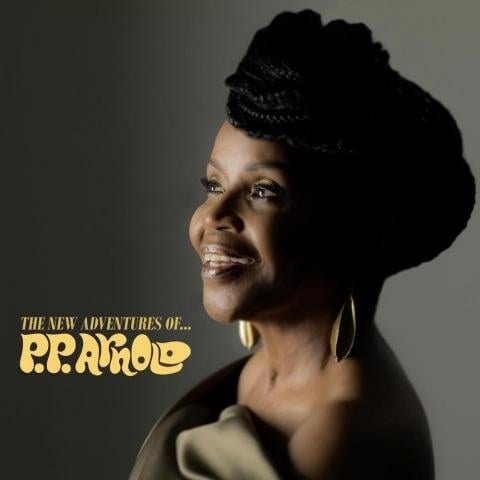 You might not initially know soul singer P.P. Arnold‘s name, but here are five random items from her voluminous resume:

These and many other accomplishments are indeed impressive. But P.P. Arnold, a legend within the British Northern soul genre, has topped them all with her new solo album, her first in a half-century, appropriately titled The New Adventures of… P.P. Arnold.

Produced by Paul Weller/Ocean Colour Scene guitarist Steve Cradock, The New Adventures of… P.P. Arnold is a sprawling and kaleidoscopic collection of songs. Arnold’s distinctive voice is the common denominator that brings the whole album together.

Clocking in at over an hour-long, The New Adventures of …P.P. Arnold seems more like a collection of two or even three separate records mashed together. That isn’t a bad thing. Although, any album with such a strong “something for everyone” aesthetic will leave any particular listener with a clear set of favorite tracks, along with a few they might be less likely to enjoy. People who go for big ballads might not fall for 1990s-style dance jams or a free jazz-influenced take on an ancient Bob Dylan poem. But matters of personal taste are just that, and it’s hard to deny the quality of even the songs a listener might not love on The New Adventures.

Producer Cradock, who also plays a variety of instruments on The New Adventures, contributes one of its best songs, the baroque soul-pop “The Magic Hour”. Truly a magic piece of work, “The Magic Hour” brings Arnold’s voice together with flute, trumpet, trombone, and string quartets, and Cradock’s instruments contributions, to great effect. Several of the songs on The New Adventures, including Arnold’s own “Though It Hurts Me Bad”, have this same orchestral soul-pop feel, echoing classic Bacharach/David songs, but also very much their own thing.

Cradock’s friend and fellow P.P. Arnold fan Weller also contributes to the album with his songs “When I Was Part of Your Picture” and “Shoot the Dove”, both mid-tempo ballads. The album also includes a set of covers not written by Cradock, Weller, or Arnold. One such cover, her take on Mike Nesmith’s “Different Drum” is fine. Although, Linda Ronstadt continues to own the song with her Stone Ponys’ definitive country rock version.

But then there is Arnold’s electrifying reinvention of Bob Dylan’s poem, “The Last Thoughts on Woody Guthrie”. Dylan is known to have publicly recited “The Last Thoughts…” just one time, unaccompanied at New York City’s Town Hall, on 12 April 1963. Dylan’s solo recitation was not officially released until 1991 on the first volume of the now long-running Bootleg Series, and is well worth hearing. But Arnold and her crew take the piece to a whole new transcendental level. She speaks/raps the words, sticking absolutely to the original text, with musical accompaniment that includes a modular synth, trumpet, trombone, and string quartet. The music darts and jabs, with various instruments fading into and out of the jam, which lasts nearly 10 minutes as Arnold recites.

Arnold and the musicians bring the final seconds of Dylan’s poem — in which he ties together Guthrie, God, the “church of your choice”, and the Grand Canyon — to a stunning conclusion that may or may not cause a listener to burst into tears, or simply sit in wonderment over what they’ve just heard. Maybe both. It’s just that kind of crazy-good. As Dylan covers go, P.P. Arnold’s “The Last Thoughts on Woody Guthrie” is Hendrix’s “All Along the Watchtower”-level good.