There’s a great and unexpected tradition of explicitly political filmmaking within the classic Hollywood studio system that can hardly be said to have survived into the modern era in any meaningful fashion. Despite hysterical cries from right-leaning media that mainstream Hollywood has methodically and monolithically embraced an over-polarized, over-politicized left agenda in filmmaking over the last few decades, the fact remains that uber-rich film executives (and many of the uber-rich filmmakers they finance and support) have a vested interest in preserving things the way they are rather than advocating for social progress—a most conservative principle.

This is best demonstrated by the fact that 2019’s Best Picture Academy Award was secured by Peter Farrelly’s Green Book, a maudlin, uninspired, politically-ignorant and racially-oblivious film so innocuously neutral toward real-world issues that it could have easily been made 30 years earlier in the staunchly conservative cultural context of 1989. Regardless of what the artists behind the films believe privately, the full weight of the industrial Hollywood machine is set against radical filmmaking. Even in the modern era, there’s an existential opposition to any kind of provocative, divisive sentiment that can’t be easily and efficiently sold.

Perhaps this is why the movies with more forthright politics of the major studio period feel so subversive—even revolutionary—today, in an era when the Overton window has, until just the last few years, heaved ceaselessly rightward. Indeed, films like The Great Dictator (1940), Charlie Chaplin’s satire of European fascism in the midst of the Second World War, Citizen Kane (1941), Orson Welles’ monumental examination of American fanaticism for fame, power, and fortune, and even Frank Capra’s It’s a Wonderful Life (1947), were wildly controversial in their time. Indeed, which J. Edgar Hoover’s FBI, at the dawn of McCarthyism, derided It’s a Wonderful Life as employing techniques of Communist propaganda for portraying the virtues of community and the indecency of hoarding wealth.

Outwardly political cinema is hardly a new phenomenon in Hollywood, but with the downfall of mid-budget movies and today’s need to succeed in international markets, we see less major studio films that risk being explicit in their criticism of American institutions or capitalism.

Of course, in 1940, such a thing was still very much possible, but that doesn’t mean it was easy. Against all odds, an idiosyncratic screenwriter-turned-director like Preston Sturges found room for himself in an industry of assembly line filmmaking. By some remarkable means, he pushed out the darkly cynical satire The Great McGinty—his first directorial effort. While hardly a radical political manifesto, The Great McGinty today feels almost incendiary in its ruthless critique of the corruption behind American politics. 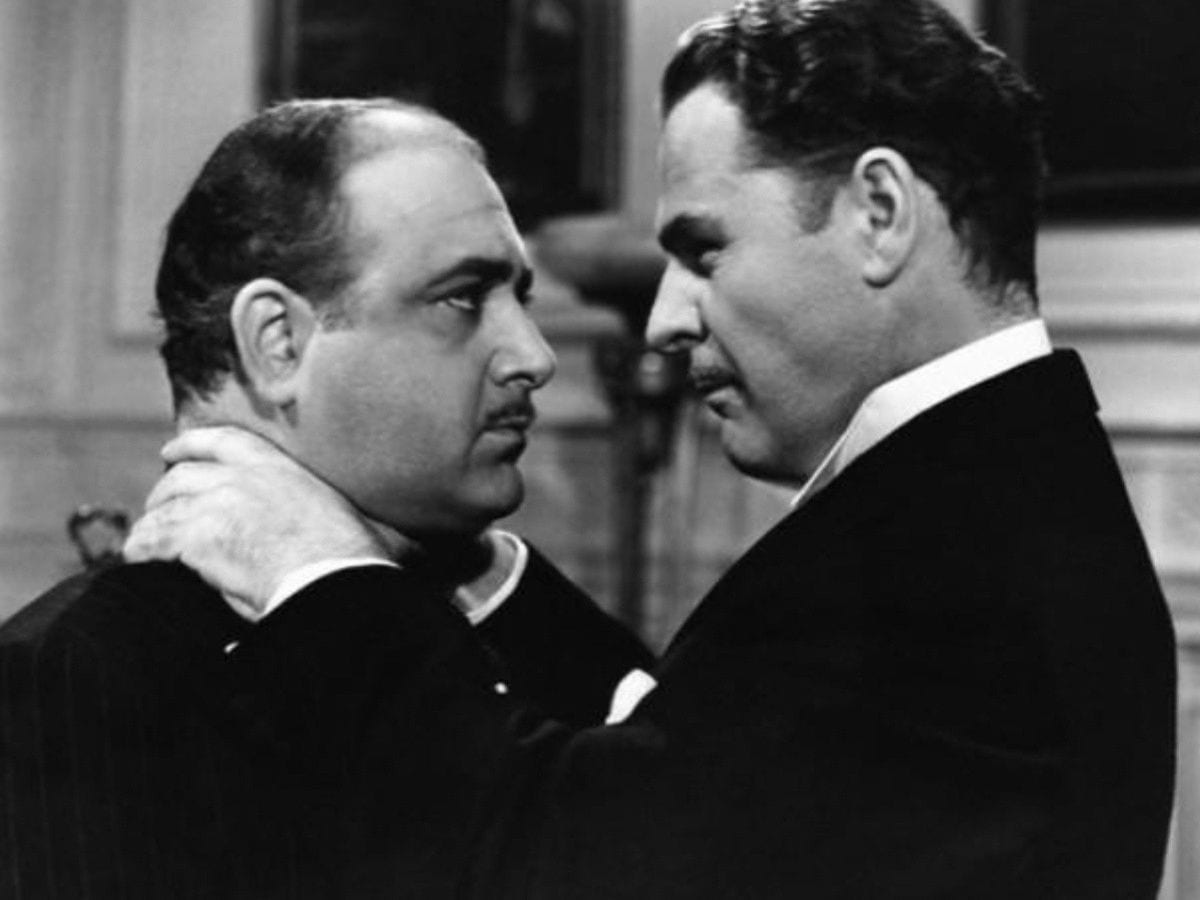 It begins when Dan McGinty (Brian Donlevy), a gruff, Depression-era vagrant, who’s paid by the lackeys of a local crime boss (Akim Tamiroff) to commit widespread voter fraud in a mayoral election, which he does just to afford food. After this job, he’s hired again by the Boss to shake down business owners for protection money. This keeps up until the incumbent mayor goes against the will of his shady benefactor. The Boss has McGinty elected, and eventually affords him the governorship. Coaxed by the idealistic principles of his new wife Catherine (Muriel Angelus), whom he marries out of political expediency, McGinty attempts to do what the film frames as the first honest deed in his life. This, of course, leads to his swift downfall.

Though The Great McGinty is a romantic-comedy at heart, Sturges’ political commentary is brutal. How many studio films, then or now, would dare introduce its hero as a participant in a voter fraud scheme played for laughs? How many acknowledge the prominent influence of nefarious moneyed interests on government business as a matter of fact? The Great McGinty is fascinating in its modernity, devoted to exploring the nebulous realms of interior morality as it concerns capitalist ideology and the ideals of the American dream. Thus, it’s more Welles than Capra or Chaplin in theme, if not style.

The film’s characters participate in an unjust and corrupt system, and much of the movie is about teasing out what it means to act morally within such a system. As outrageously off-track as the movie becomes through its offbeat comedy and sudden love story, it never loses sight of that difficulty.

Famously, Sturges, already a successful screenwriter at the time, sold the film’s script to Paramount for a mere $10 on the condition that he be allowed to direct. The studio obliged, offering a meager budget in return. Transitioning from writer to director was then mostly unheard of in the highly-regimented Hollywood system, but the film’s modest success on release lead to a celebrated career for Sturges throughout the ’40s.

Given the inexperience of the director and the sensitive content of the film, making The Great McGinty was risky for a major Hollywood studio at the time (mitigated, admittedly, by cautious production constraints). That a film as inflammatory as this—and directed by a relatively fresh voice—was capable of succeeding speaks to the unique spirit of FDR’s America, a country then amplifying a kind of political and social awareness that feels not totally unlike the climate of America today. In its storytelling, The Great McGinty is a great reminder of what politically-charged, mainstream American cinema can look like. 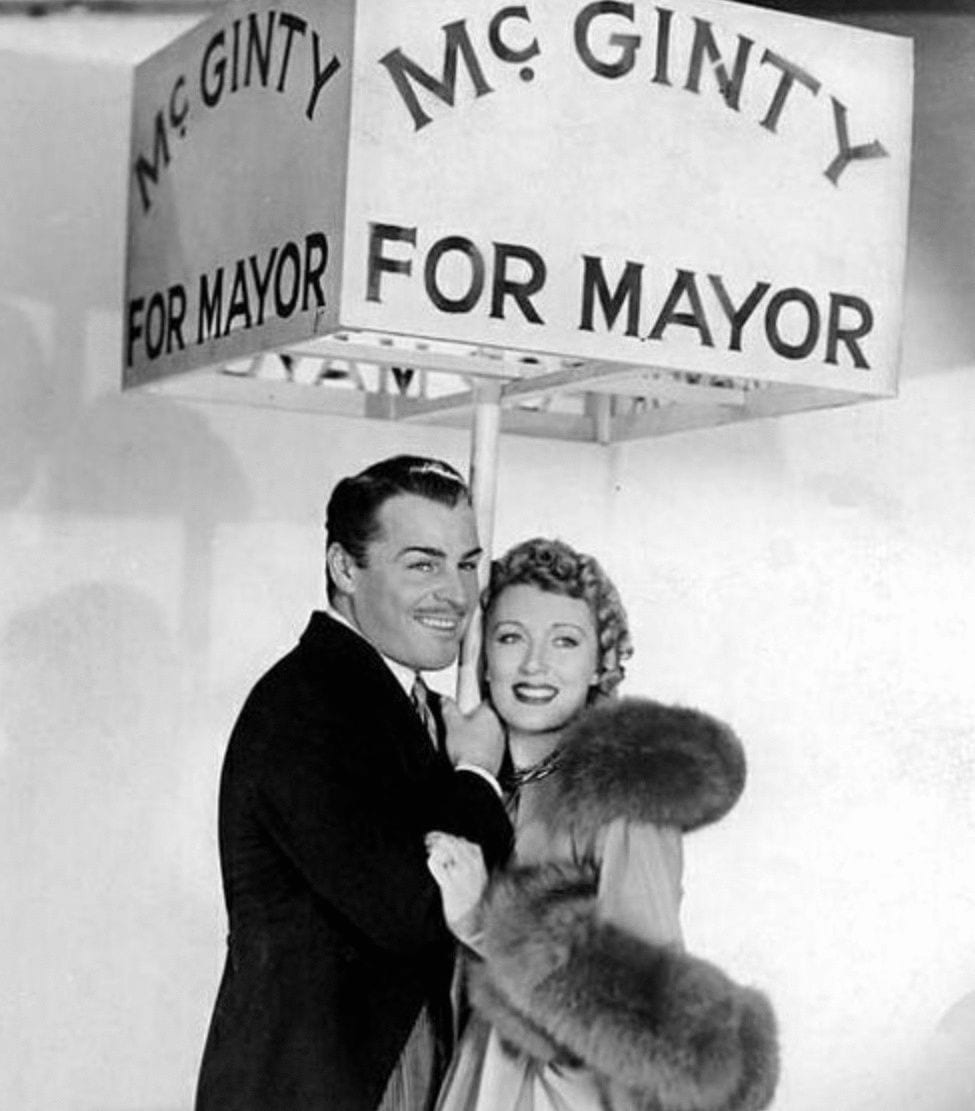 Unfortunately, if the film’s politics lean toward more a radical assessment of the values of American government than one might expect from a studio film, the surrounding filmmaking is disappointingly moderated by convention. Watching the film now, with the context of the rest of Sturges’ career in mind, one can see how his lack of practice in the role of director had adverse effects on the final product.

Dan and Catherine’s relationship, for instance, while central to the film’s moral intention, is severely underdeveloped. The framing device with McGinty in a far-off country telling his story in flashback is implemented awkwardly. Furthermore, as is frequently the case with Sturges’ quite pithy sensibilities, the film ends with almost frustrating abruptness. Tthe director’s flair for sophisticated absurdity shines through in a few glorious moments, but in terms of irreverent whimsy or slapstick anarchy, the film is easily outclassed by more consistently entertaining and technically impressive Sturges greats such as The Lady Eve (1941), The Palm Beach Story (1942), The Miracle of Morgan’s Creek (1944), and Unfaithfully Yours (1948).

Perhaps The Great McGinty is better compared to what may be the director’s best remembered movie, Sullivan’s Travels (1941), which is much more of a message-focused film and less of an uproarious romp than his other work. Still, The Great McGinty is far too erratic in its plotting to emerge favorably from such a juxtaposition.

Instead, it may be best to view The Great McGinty as something totally different, if not entirely unique for its era (but maybe ours): a good-natured farce that was overt in its disdain for American political processes and the institutional neglect for the economically disadvantaged. As a comedy and as a romance, Sturges could and would do far superior work than The Great McGinty in the years to come; as a work of political theater for the cinema, though, it’s something worth seeing.

Kino Lorber’s new Blu-ray release boasts a new 4K master of the film. It also includes audio commentary featuring film historian Samm Deighan, who presents minor background details on the production of the movie, places the film in the context of Sturges’ career, and analyzes its political themes in greater detail. Overall, it’s a lean but satisfactory package.