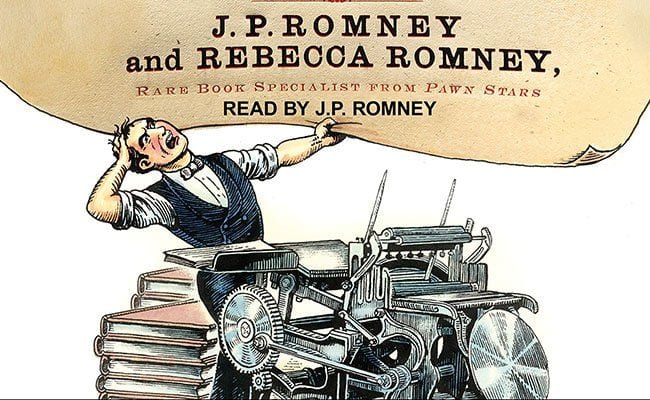 Authors and rare book specialists J.P. and Rebecca Romney put an amusing narrative spin on the history of publishing that could, in lesser hands, be rather dry. Printer’s Error: Irreverent Stories from Book History takes a chronological look at some of the more interesting elements of the history of the printed word, from the earliest criticisms of the medium by 15th century Benedictine monk Trithemius through to the micro presses of the early 20th century. Through humorous analyses and by placing a modern spin on these historical tales, their approach helps afford not only the proper historical context, but also a contemporary view of what has since become the high-dollar world of rare books.

Structured somewhat like a contemporary biography, the Romneys begin their narrative in the recent past with the you-couldn’t-make-this-up-if-you-tried story of master book forger and rare book dealer Marino Massimo De Caro. So convincing was his forgery of Galileo Galilei’s Sidereus Nuncius (circa 2007) that he managed to fool every single rare book expert who inspected the text. How? He put in an inordinate amount of time, research, and meticulously detailed work into creating a modern forgery that, for all intents and purposes, looked to be straight from the desk of Galileo. This serves as the perfect set up to the world of both printing and rare books as the Romneys are able to step-by-step take apart just how De Caro managed such a spectacular forgery. Putting aside the seemingly incredible claim of the book being an original copy from 1610, the Romneys share the stories of many surviving texts from the 17th century and earlier that have become prized collectors’ pieces that more often than not trade hands for seven figures or more.

With the James Bond-like account of De Caro’s magnificent deception — something of which he was inordinately proud which, truth be told, he should given the fact he managed to fool every single rare book expert in the world — setting the stage, the Romney’s irreverent tone is quickly established. Just in the nick of time, too, as they then take the reader back to the dawn of the printing press and the murky history of one Johannes Gutenberg. Given the lack of recorded history surrounding Gutenberg and his world-changing invention, much of his story is related through the angry writings of Trithemius. Failing to see the irony in his actions, Trithemius argued that the printing press would ruin and corrupt the sacred art of handwritten manuscripts; only he did so using the very invention he so despised. This portion of the narrative is particularly effective in that it shows that, indeed, the more things change, the more they stay the same.

History then takes a turn for the barbarically bloody as wars are fought, religious ideologies are simultaneously forced and suppressed, and society marches on. At the center of it all lies the humble printing press and the revolution it unleashed, often literally. The battle over the English Bible, for example, reads, by modern standards, as an allegorical farce, each side taking an absurdly extreme view that naturally pits them against one another. Here they recount the story of William Tyndale and his valiant campaign to produce an English Bible by any means necessary. There were, of course, many means. Using secret underground trade routes, back-alley dealings and all sorts of heretical thought, Tyndale’s crusade branded him an international fugitive who faced certain death for seeking to print a Bible in English. Out of context, this is yet another ridiculously overblown reaction to an otherwise seemingly harmless act. But given the strength and reach of the church at that time, it simply could not risk the Bible falling into the hands of the common people, unmitigated by priestly intervention.

Tyndale would in time make many enemies, including a particularly spiteful Thomas More who, according to the Romneys, wrote that Tyndale’s English translation, “should be called ‘the testament of his master, Antichrist,’ [and that he] ‘sheweth himself so puffed upp with the poison of pride, malice, and evil, that it is more than a marvel that the skin can hold together.’” Yes, it seems the first lord chancellor of England may, in fact, have been the ancient ancestor of the modern troll. Directing his vicious vitriolic verbiage at not only Tyndale, More said of religious reformer Martin Luther, “[he’s] an ape, an arse, a drunkard, a pieace of scurf [dandruff], a pestilential buffoon, and a dishonest liar… Someone should shit into Luther’s mouth, he farts anathema, it will be right to piss into his mouth, he is filled with shit, dung, filth, and excrement; look, my own fingers are covered with shit when I try to clean his filthy mouth.” Yikes.

It is from these types of anecdotes that the Romneys get the most mileage, offering their own humorous asides and interstitial observations as they strive to enliven the otherwise dusty pages of printing history. Moving through Shakespeare and the bad quatros of Hamelt, Benjamin Franklin’s massive fuck-you to all the naysayers in Philadelphia, and William Blake’s unsettling artwork accompanying his equally unsettling poems, the Romneys manage to craft a wildly entertaining, endlessly amusing romp through the history of the printed word.

Saving some of their best assessments for last, they explore the ill-fated visit to the United States of the then biggest literary star in the world, one Charles Dickens. Finding one another an appallingly poor fit socially, culturally and academically, this impromptu tour went over about as well as the Beatles arriving in New York and John Lennon’s crack about the band being more popular than Jesus (a quote largely taken out of context, of course), leaving thousands of former fans seething in the streets and calling for Dickens’ head. All these are more make for a rousing read told in a breezy, often laugh-out-loud funny manner. Who knew the history of books and printing could be this much fun?