From a morass of sci-fi remakes and reboots, Prospect jettisons free. Debut feature from Zeek Earl and Chris Caldwell (interviewed here at PopMatters) Prospect (2018) grips, chills and rarely cloys—a boast few if any Hollywood films with larger budgets can claim. Earnest and austere, the film is pure story: no narration, flashbacks, nor exposition. Prospect asserts that realism and sci-fi can not only coincide but can be a conduit for a coming of age story, driven by language and ideas. It is immersive, if not wholly satisfying.

It’s not until over three-quarters through that the unnamed female protagonist — in a taut performance from Sophie Thatcher –identifies herself as Cee. She a laconic, unyielding teen tethered to her slipshod if enterprising father Damon. He launched them on this last ditch, get-rich-quick mission to the remote Green Moon to mine a motherload cache of the precious gem aurelac.

What’s key about her name reveal isn’t just the timing, but to whom she’s speaking: Ezra—a cunning and loquacious brigand played with swagger by Pedro Pascal with whom Cee has made a tenuous alliance. Cee has precious little time left to catch the sling back—a transit satellite—back to the known universe. The film is a gamut of choices Cee must make to survive.

Denizens of the Pacific Northwest may have trouble finding much alien about the Green Moon, conveyed to us by long shots of sword ferns and moss-covered trees, both salient features of Washington’s temperate rainforest. Also, the rhythms of the characters’ tread through the Green Moon gives the impression that the writers thought most of this up while backpacking through this fertile corner of Earth. With the unslinging of hulking packs and the pondering over a map, Prospect is at times so reminiscent of such hiking that a viewer may forget they’re watching explorers of another planet. 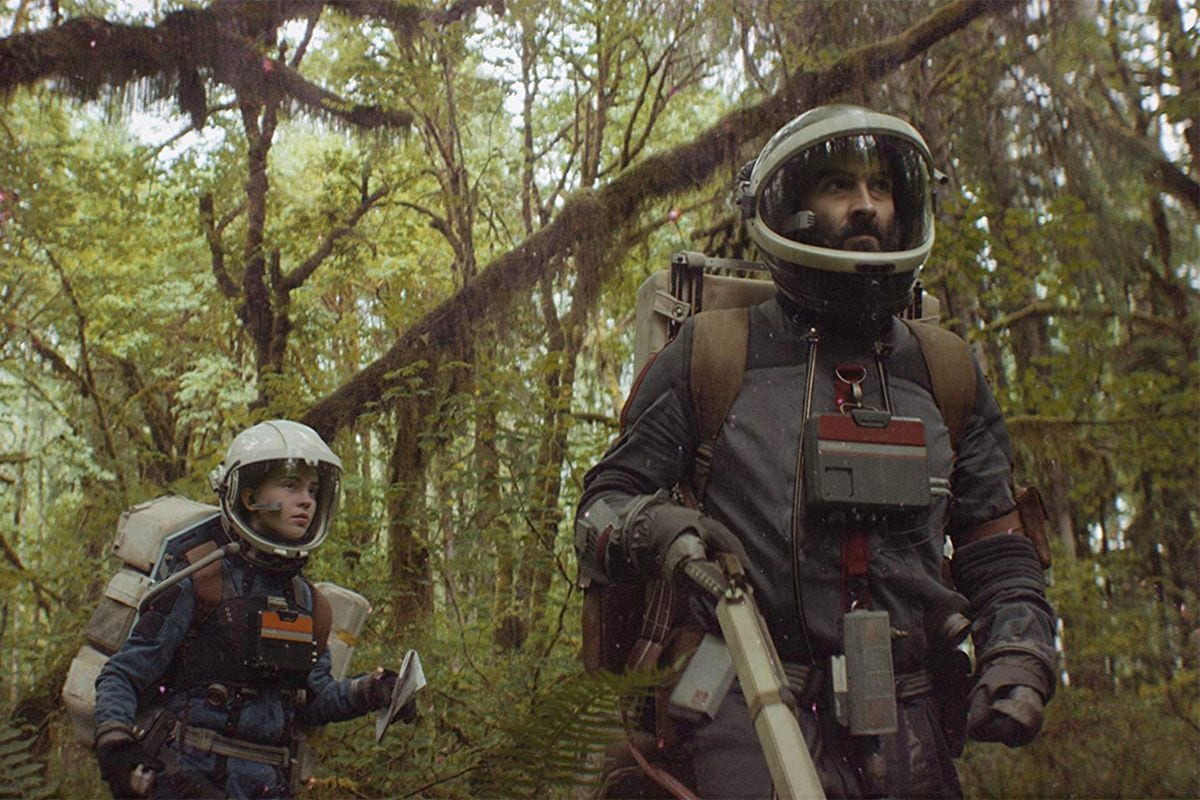 Sophie Thatcher as Cee and Jay Duplass as Damon (IMDB)

Ultimately, it’s the familiarity of the setting and situation that helps draw viewers in. From the cockpit instruments to their spacesuits and weapons, everything appears worn, impersonal and clunky with pure utility in a way that grounds the viewer for some of the stranger things to come.

Particles like the fluff off black cottonwoods permeate the dense forest, which makes the Green Moon just different enough from what we know on Earth to be unnerving. Arranged by Daniel Caldwell, the director’s younger brother, the score’s tense violins and ominous ambience sink a viewer into this strange and hostile world. It perfectly expresses a world defined by the febrile aurelac extraction process, the enclave of religious zealots, the prickly mercenaries, and the tastefully CGI-ed planets hovering above.

Cee’s decision-making can be flinty and dispassionate. After Ezra waylays her and her father, Cee flees from him, wounds him in self-defense, and threatens to kill him. Eventually, though, Cee grudgingly accepts Ezra, thief and murderer, as a partner in aurelac collection and finding a flight home. Though a viewer may balk at this, Cee is set on survival and a return to the Slingback and makes decisions accordingly. Indeed, how close Cee is willing to get to Ezra is a continual source of suspense in the story. The uncomfortable character dynamic between them elevates the drama in this sci-fi flick. 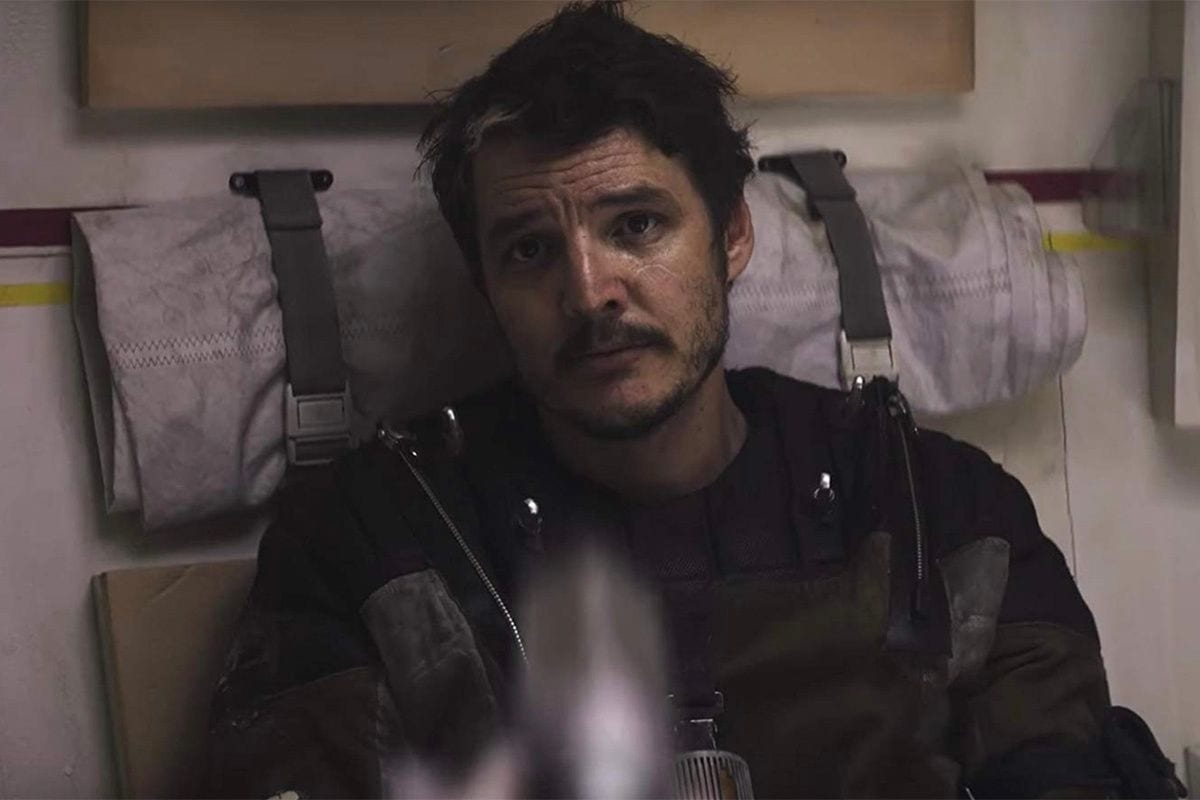 Cee is convinced again and again to overlook Ezra’s unscrupulousness through his ceaseless parlaying. A sub-tenor of the film is Ezra’s diction, which changes registers from low to lofty. In his first parlay with Cee, Ezra uses elocution to hide his dubious logic about why he’s a potential ally. Cee appears dazed by Ezra’s palavering. Executed in a Texas accent with a side of ham, Ezra’s verbosity can cloy on the ear. In what tense negotiation would the word “riposte” come to mind? Overall, though, the effect is laudable. As Shakespeare demonstrates time and again, the persuasive prevail.

A viewer might be unsatisfied with the film’s climax. These flimmakers’ refuse hokey Hollywood triumphs (think The Last Jedi), but stay faithful to realism and character motive. The first frame of Cee is her journaling while listening to music and brooding over the strange planets. In Thatcher’s pinpoint expressions, she’s communicated Cee’s travel-weary disenchantment for exploration. In an early exchange with her father, she says she wants to return to where they lived with her mom. What Cee wants is what most teenagers do: belonging, and a quiet corner of the galaxy in which she can dream.

Amidst her father’s ambition, Ezra’s pontificating, and the aurelac’s amber allure, Cee makes a series of harrowing choices to get to the true prospect. She is discovering how far a she will go to get what she wants. Highlighted by a youthful choir of airy chants in the foreground of the score, Prospect is ultimately a coming of age story.

Alike tonally and thematically to Tom Godwin’s The Cold Equations, Prospect offers a riveting survival story in space. If Cee’s character arc seems drawn from an unsympathetic premise, it fits the overarching setting Earl and Caldwell are inhabiting: unfriendly, intriguing, probing. It’s the territory of good sci-fi, which explores how an individual in far-flung circumstances must contort themselves to endure.