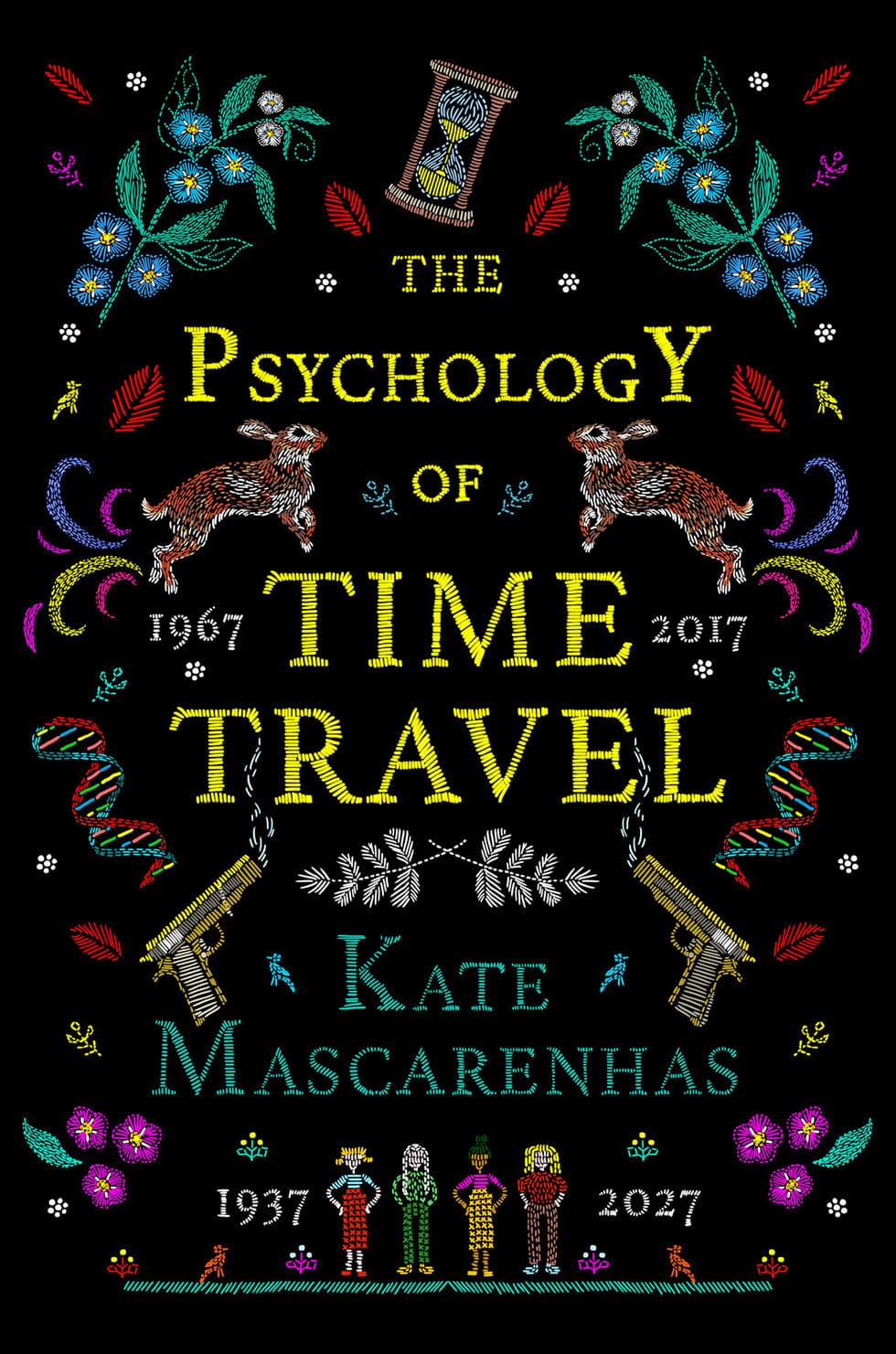 Appropriately for a novel that explores how people relate to one another and to themselves via the use of time travel, Kate Mascarenhas‘ The Psychology of Time Travel pushes and pulls the reader across various timelines, always keeping us slightly on our toes. We open with the discovery of time travel technology by four scientists in 1967: authoritative Margaret, exacting Lucille, mysterious Grace, and passionate Barbara.

When Barbara suddenly has an emotional and mental breakdown during a television interview, she’s cut off from the group and left to live her life in obscurity, eternally wishing to travel through time once again. Meanwhile, Margaret, Lucille, and Grace go on to form the Conclave, the exceedingly powerful central organization for traveling through time, headquartered in London but under no one’s authority but its own.

Fifty-one years later, a Cambridge student named Odette discovers an elderly woman horribly killed in the toy museum where she’s volunteering. When forensic evidence reveals the presence of bacteria generated during the time-travel chemical process, the mystery deepens further. Who is the woman Odette found, and how did she die? How is time travel involved? What may seem like an ordinary crime becomes Odette’s obsession, leading her into the mysterious world of the Conclave.

Along the way, we move back and forth into the intersecting storyline of Ruby, Odette’s motorcycle-riding therapist and Barbara’s granddaughter, who finds herself falling in love with Grace, despite the fact that their respective timelines are 50 years apart. All the while, Margaret (one cannot help but think of the late Prime Minister Thatcher) continues to control the Conclave with an increasingly ruthless fist.

As humorously debated in the Russo Brothers’ Avengers: Endgame (2019) and borne out by hundreds of previous time travel stories, part of the fun is in the world-building of moving through time. What are the rules? What are the pitfalls? Will stepping on a butterfly lead to a fascist dictatorship millions of years later?

In The Psychology of Time Travel, the rules are not quite as carefully explicated as the time-travel system in Connie Willis’ Doomsday Book (Bantam Spectra, 1992) and To Say Nothing of the Dog (ibid, 1997), where particular attention is paid to the logistics of moving time-travelers to precise locations and times. Where Willis’s characters are performing exacting academic research requiring perfect period costuming and timed drops, Mascarenhas takes a more thematic approach: the focus in The Psychology of Time Travel is on the effects jumping around in time has on people and their relationships, and the instabilities of trust and identity that can result. There’s a whole lexicography of time-traveler slang that slowly grows on the reader, including the following: “green-me” is how a time traveler refers to their younger self, and “silver-me” is a time traveler’s older self; “forecasting” refers to having sex with yourself in the future, because of course there’s a term for that.

Another amusing element of The Psychology of Time Travel comes from how time travel is perceived in the outside world. Willis’s world-building establishes a fundamental inability to move objects (like valuable artifacts or chests of gold) across time, meaning it’s essentially useless in a consumer society. Time travel, then, is consigned to academia and the dusty halls of Oxford. Mascarenhas takes the opposite tack, imagining a world in time travel has essentially become its own cottage industry. The Conclave sells extensive merchandise to help normalize time travel in the public eye and also, arguably, to plant seeds of intrigue in young peoples’ minds, with an eye towards future recruits. A popular children’s toy called the “Conjuror’s Candybox” uses the time travel technology to make whatever is placed inside it (a piece of candy, for example) disappear and reappear.

With the establishment of the Conclave as opaque, sinister, and seemingly all-powerful, there’s an unsubtle but worthwhile critique here of parallel private government-like systems. The Conclave operates outside of the confines of British government control, and it’s frightening to see how cruel and capricious the Conclave legal system can be. Trials of wrongdoing are done by ordeal rather than by jury, relying on the accused surviving a difficult test to prove their innocence. Like many large-scale workplaces (see “Are Bosses Dictators?” by Joshua Rothman, The New Yorker, 12 Sep 2017), or private police forces maintained by the wealthy and by universities (see “Private Police: Mercenaries for the American Police State“, by John W. Whitehead, Huffington Post, 5 May 2015), Margaret’s Conclave answers to no one and nothing but itself, and it’s nothing short of terrifying.

One of the most refreshing elements of The Psychology of Time Travel is its abundance of female characters who drive the narrative. The male characters in the novel are in the position of the long-suffering wife of prestige novels and films — marginal, incidental, less fleshed-out than the protagonists. But it’s not just the main characters that are overwhelmingly women: the minor characters as they appear, like the psychologist who helps Margaret devise mental health tests for the Conclave (to avoid another Barbara situation, in Margaret’s view), or the Conclave employee who administers Odette’s application. It’s clearly an active choice by Mascarenhas to flip the script on the normalized “four/five guys plus one girl” ratio of main characters, and it’s entirely welcome.

Additionally, the relationship between Ruby and Grace is affectionately written, made all the more gently tragic by their mismatch in timelines. Indeed, one of the first things we learn about Grace after the table-setting 1960s prologue is that she’s going to die in 2027; Ruby first encounters her in 2017, meaning they can see both the beginning and end of their romance simultaneously.

Dry title aside, The Psychology of Time Travel balances thrilling mystery, complex characterization, and emotional depth, and is a strong debut for Kate Mascarenhas.