Puzzle arrives in theaters at a moment when total immersion in idiosyncratic pursuits has never held greater social cachet. People used to enjoy uncommon hobbies with discretion. These days, it’s vogue to emphasize one’s interest in birding or comic books to the point where it becomes a marker of social identity. This inversion is a side effect of the rise of geek or nerd culture, which has become so ubiquitous it’s now mainstream. As Matthew Kitchen once observed in Esquire, being a geek in contemporary society “isn’t about the specific aspects of culture one obsesses over anymore… it’s simply the inclination to obsess about those things in the first place, regardless of the trends.”

Indeed, nerdy investment is the new cool, which is part of the reason I went to see Puzzle, a film about a woman who discovers an innate talent for solving puzzles and rapidly becomes engrossed in her new hobby. I wanted to know if Puzzle was a normcore rejoinder to the increased popularity of cosplay, or middle America’s answer to the DIY pursuits bearded, urban dwelling males embrace with unbounded avidity.

The answer to these questions is no, not really. The characters interest in competitive jigsaw puzzling is an ancillary plot point rather than a main one, a mechanism of narrative rather than an indispensable thematic element. At its core, Puzzle is a film about self-discovery and the rectifying of small scale injustices that still manage to feel gross. It’s a low stakes redemption story that resonates on a grander scale. 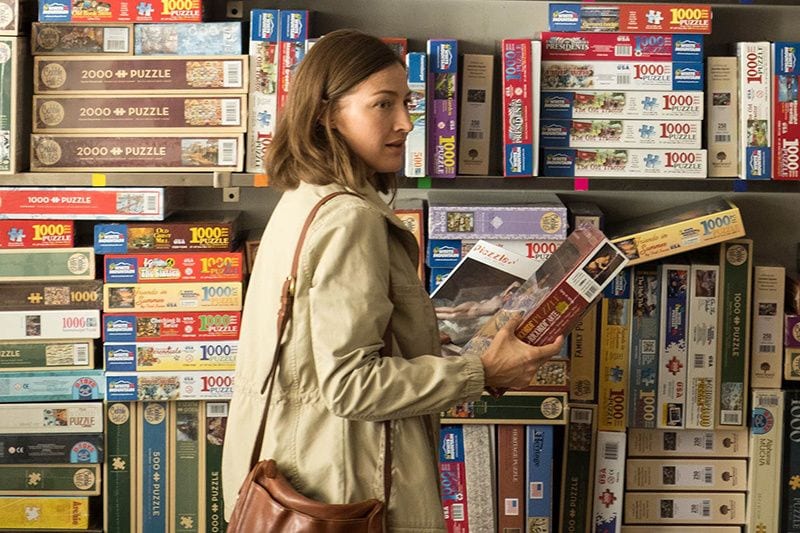 Puzzle begins with an unfairly overlooked and generally unfulfilled housewife named Agnes (Kelly MacDonald) failing to enjoy her own birthday party. Rather than laughing and socializing with the other guests, she cleans up after her husband Louie (David Denman), prepares her own birthday cake, and skulks about the party with a meek, unsatisfied look on her face. Her commitment to rote domestic tasks isn’t half as depressing as the way her guests watch her do these things and seem to tacitly acknowledge that this is exactly how she should be spending her birthday; one gets the sense that if Agnes were to crack open a beer and put her feet up everyone in the room would start wondering if something was wrong.

Thankfully, serendipity intervenes. One guest gives Agnes a 10,000 piece puzzle as a gift. Agnes solves it in an extraordinarily small amount of time. Later that night, Louie finds her in bed, reading the section of the puzzle’s instructions that lists solving strategies. (Quick note: this may be the first cinematic representation of reading puzzle directions in the history of film.) She soon ventures from the nondescript commuter town where she’s spent all her life to a Greenwich Village located shop that purveys only puzzles, the type of quirky urban retailer that may have been converted to a chichi brunch spot by the time this article goes live. She buys two more puzzles and finds a flyer advertising a champion puzzle solver’s need for a partner. After some brief contemplation, she texts the number on the flyer using her new iPhone (also a birthday gift) and is back on the commuter train before long. 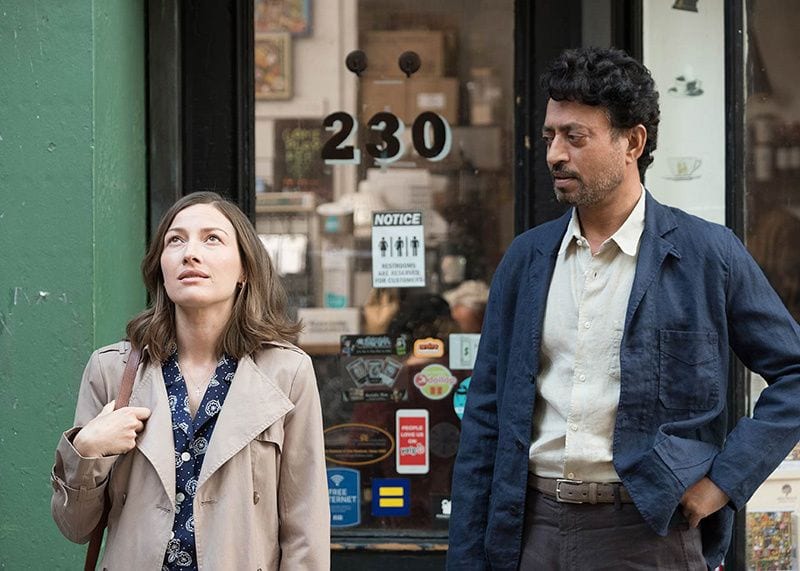 Agnes’ second trip to the city leads her to the door of Robert (Irrfan Khan), an eccentric puzzle obsessive whose upscale home indicates he has a lot of money in the bank and whose wife and former puzzler partner recently left him. Agnes’ skill impresses Robert. The two decide to enter a puzzle competition. This in turn leads Agnes to start sneaking off to the city on a regular basis, so that she can practice with Robert and cultivate this strange but interesting relationship, one so different from every other relationship in Agnes’ life in that it’s predicated on mutual admiration and a shared interest rather than the notion that Agnes’ sole purpose is to serve others.

There’s nothing particularly surprising or original about this narrative arc. What makes watching it unfold so enjoyable, however, is the ease with which MacDonald and Khan inhabit their respective characters and the subtle ways Agnes begins to change as she slowly realizes she’s better at competitive puzzling than her husband and two sons are at anything else. At home, she starts airing her true feelings more often, through understated gestures at first and then with more overt declarations. She shirks the housework that has, unfortunately, defined her existence up to this point, and lets her husband know that she is his equal as opposed to some marginalized sidekick.

Khan’s Robert feels like a distant cousin to the Manic Pixie Dream Girl archetype found in so many indie-ish films from the early to mid-’00s. Everything about the character, from his obsession with watching news stories about natural (and manmade) disasters to his speech cadence and body language to his belief in the fundamental randomness of life, screams whimsy. But this Manic Pixie Puzzle Man serves his narrative purpose by helping Agnes nurture her new passion. In doing so, she gains the requisite self-confidence to do something far more meaningful than finish a puzzle—she shifts the power dynamics governing her relationships with family members and puts both herself and them in a position to make those relationships more meaningful as time moves forward. 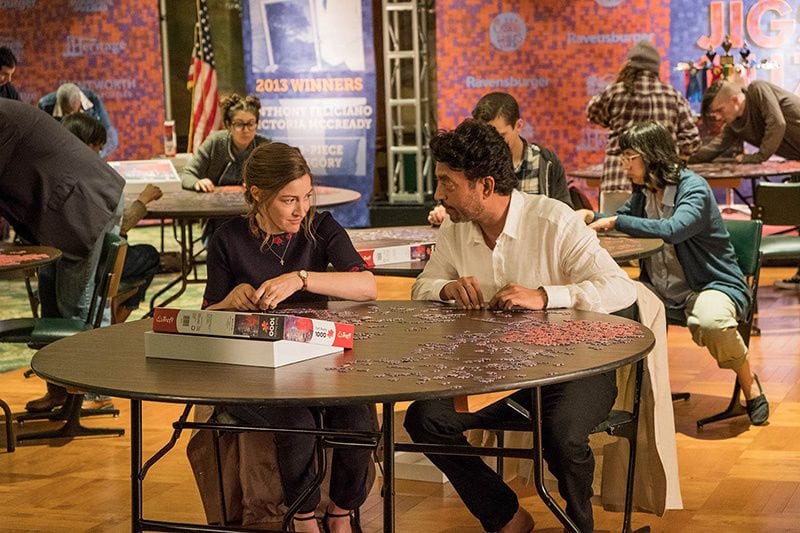 Director Marc Turtletaub deserves credit for making Agnes’ home life the vortex of the narrative; in a stroke of directing genius, he wisely decides not to show the moment Agnes and Robert win the puzzle competition, perhaps out of fear that doing so would have suggested the victory represents an important end unto itself in Agnes’ life. In this sense, the film celebrates an approach to hobbies that feels somewhat retro; puzzling becomes a cherished accessory to Agnes’ life rather than the defining feature of her personality.

Like Agnes, Puzzle‘s two leads are unfairly overlooked and underutilized talents, and I sincerely hope MacDonald and Khan receive more leading roles like these. MacDonald’s portrayal of Agnes is a revelation; the nuanced facial expressions she wears while riding the train to and from New York, always gazing out the window as opposed to staring at her phone, could propel an epic poem. The character of Robert may be less robust, but in Khan’s hands he’s no less affecting. Scenes take on a special sort of life when he’s onscreen, and one can only hope the Manic Pixie Puzzle Man or some related archetype will pop up in future films, always seeking to animate the souls of nondescript yet talent laden female leads.

Puzzle is a film that’s enjoyable whether or not you have a special talent or idiosyncratic hobby, the sort of film that understands life is a puzzle that requires solving even if it can’t be won or lost.