Nigel Kneale is one of those writers whom other writers fawn over, particularly within the genres of science fiction, fantasy, and horror. His influence is vast and continues to this day. But he remains relatively obscure in the US. In the UK, Kneale and his most lasting creation, Professor Bernard Quatermass, are much more well known.

Kneale’s first serial for the BBC was 1953’s The Quatermass Experiment (1953), which introduced the brilliant and philosophical scientist in an exciting story about the first manned spaceflight and its terrible consequences. Its massive success led to two more serials featuring the character, 1955’s Quatermass II and Quatermass and the Pit (1958). These were all live television productions, by the way, involving complex staging and extremely ambitious special effects for the time, many done by Kneale himself.

By the time Quatermass and the Pit aired, Hammer Films had already adapted the first two serials into very popular motion pictures. Kneale did not like these adaptations. He objected to changes to the story by director Val Guest and especially to the casting of American tough-guy actor Brian Donlevy as Quatermass. The studio intended to bring the third serial to the screen in 1963 with both Guest and Donlevy returning. But for various reasons the production was delayed to 1968. By then both Guest and Donlevy were no longer involved. Roy Ward Baker would direct and Andrew Kier would star as Quatermass. Kneale was pleased with both and this time he would write the screenplay himself, compressing the three hour tale into a tense and fast paced 97-minutes. The story is much more thematically challenging than the first two serials and is easily Kneale’s most representative

Quatermass (this time played by Andrew Kier) is called in by the British government when what appears to be a bomb is discovered by workers constructing an expansion to the London Underground. Along with his colleague Dr. Roney (James Donald) and Roney’s assistant Barbara (Barbara Shelly), Quatermass quickly realizes that the object is not a bomb and it’s made from a material unknown to this planet. Even more mysterious are the skulls lying in the excavated area around it, some of which are of early man and some…not. Their investigation poses many provocative questions regarding the nature of human evolution and the conception of the devil itself. But this isn’t just an intellectual argument. A powerful psychic energy, buried for millions of years, begins to erupt, causing chaos in the streets of London.

Kneale’s lasting contribution to literature and film was the marriage of science fiction and horror. But not by simply smashing the two genres together or allowing one to swallow up the other. In Quatermass and the Pit, Kneale doesn’t use science to dispel superstition but to prove that the frightening myths and legends were always true. During the film’s suspenseful climax, Dr. Roney puts his faith in the probability that the scientific truth behind an old superstition will defeat the “evil”. Kneale powers this ending by allowing the literal evil to be stopped but not the metaphorical one he’s been writing about all along: Genocide. Kneale suggests that a collective hatred of the Other was programmed into our race from the beginning. Amazingly, this challenge to religious notions of good and evil did not cause more controversy in 1968, let alone 1958, when it first aired on television.

Now, regarding the film itself. I’ve been talking about Kneale here rather than the director, Roy Ward Baker, because this is one of those rare occasions when the play really is the thing. Baker was a veteran director of both British and American films and this would be the beginning of a long relationship with Hammer Films. He stages Quatermass and the Pit very efficiently and makes wonderful use of the Tube station set designed by Hammer Films’s “secret weapon”, Bernard Robinson. However, Baker brings nothing more to it. His work is strictly business and allows the story and acting to take center stage.

The film is still very good, because those things are so effective. Kier grounds the film with his sober and serious presence. He is as effective here as he was in Terence Fisher’s Dracula Prince of Darkness (1966), where he almost-almost-makes you forget the absence of Peter Cushing. But if you compare Baker’s approach to the that taken by Director Val Guest in the first two Quatermass films, Baker loses on every level. Guest may have clashed with Kneale’s artistic intentions but he brought something new and exciting to the stories by shooting them in a newsreel style, using real locations and handheld cameras. The black and white photography was also an asset, giving those stories a gritty and raw feel that the splashy color of this film lacks.

This may also be one of the reasons why the original BBC TV production is superior to the film. The story plays out in something very near real-time, and the black and white images create the sense of a live event unfolding in front of our eyes. Andre Morrell is an even better Quatermass and the story uses the three-hour running time to its advantage, delving deeper into the history of paranormal incidents in the area and slowly revealing its secrets with an ever-increasing sense of danger. 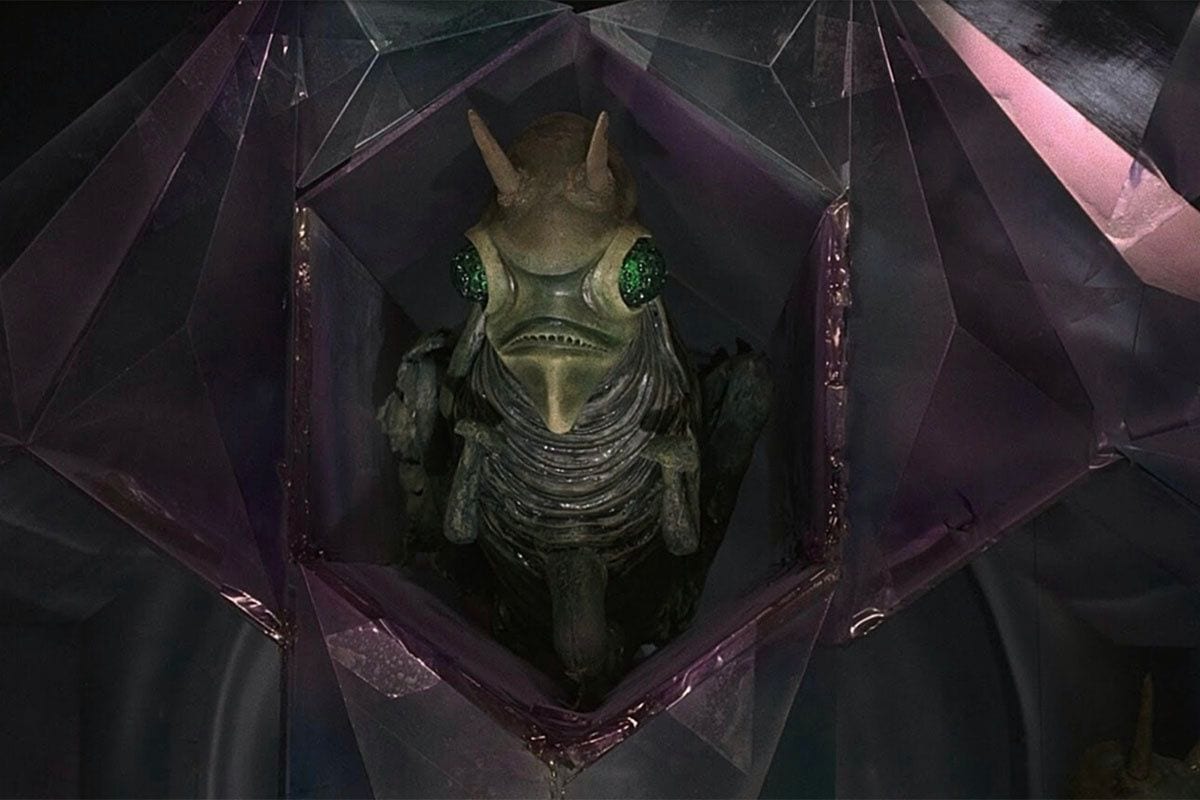 The TV version fails to create the sense of apocalyptic chaos that the film does so splendidly, but the aliens have more interesting designs and the “cleansing of the hive” sequence is somehow more convincing on an even lower budget. The same sequence in the film is so laughably bad it almost kills the film. It is to Kneale’s credit as a writer, however, that the story is so interesting that we can move past that scene and stay invested in the drama until the end.

The film has a fine supporting cast from James Donald (Bridge on the River Kwai, David Lean, 1957) to Hammer Films regular Barbara Shelly and Julian Glover in an early role as Colonel Breen which proves he was choosing “unwisely” long before Indiana Jones and the Last Crusade (Steven Spielberg, 1989).

The excellent Blu-Ray from Scream! Factory is packed with extras. You could spend an entire weekend going through it all. There are commentary tracks with Kneale and Baker, one by author Bruce G. Hallenbeck, which goes into great detail about the history of the production, and a third track with author Steve Haberman and filmmaker Constantine Nasr. Ten interviews with everyone from Gremlins director and Trailers from Hell guru Joe Dante to the focus-puller, Bob Jordan. The best of these is an 18-minute interview with Kneale’s widow, Judith Kerr, and a 31-minute interview with a witty and emotional Julian Glover reminiscing about his character’s mustache and all of the people who are now gone. Theatrical trailers, TV spots, and a Stills Gallery are included as well.

By the way, if you’ve seen John Carpenter’s Prince of Darkness, you may have noticed that the film’s screenplay is credited to a writer named Martin Quatermass. This pseudonym was Carpenter’s way of acknowledging the huge debt he owed Nigel Kneale in creating the film as Prince of Darkness borrows greatly from both this film and Kneale’s later work, The Stone Tape (1972).