Once Upon a Time... in Hollywood
Quentin Tarantino
Sony Pictures

The words ‘restraint’ and ‘Tarantino’ have rarely collided in the same sentence over the bombastic filmmaker’s three-decade career. He’s never been averse to allowing his stylistic indulgences overwhelm the story. With Reservoir Dogs and Pulp Fiction, Tarantino practically invented a sub-genre of pop-smart, dialogue-driven, shamelessly violent and entertaining movies that lesser filmmakers were doomed to imitate. With his latest feature, Once Upon a Time… in Hollywood, Tarantino finally moves beyond the comfortable confines of the monster he created and delivers an assured masterpiece of breathtaking, and yes, restrained filmmaking.

Once Upon a Time… in Hollywood is Tarantino’s most complete film to date. Each character has their own voice and their written with the depth needed to speak for themselves. Apart from one brief, terribly misconceived segment of voiceover narration, there are no Tarantino surrogates to be found here. The churning humanity in these characters lends extra import (and humor) to their stories. This is a slick flick to be sure, with plenty of propulsive action and shocking violence, but the real treasures reside in its lighter diversions. This is a breezy, top-down-on-the-convertible kind of film that wows you with its surprising sweetness before punching you with a bloody fist.

Tarantino was destined to make a film about Hollywood. He understands Hollywood as well as any historian and cherishes every piece of righteous trash that ever dirtied the Los Angeles River. Here, he spins a fairy tale about the town that traffics in fairy tales. There are beautiful maidens, charming princes, dreamers of ridiculous dreams, and evil hippies. Lots and lots of evil hippies.

Here’s the story. Back in the early 1960s, actor Rick Dalton (Leonardo DiCaprio) was poised for stardom. He played the ruthless bounty hunter Jake Cahill on television’s Bounty Law and made several marginal films, most notably the World War II yarn, The 14 Fists of McCluskey. He got to use a real flamethrower in that one and still has it mounted in his pool cabana! If Steve McQueen had turned down his role in The Great Escape, Rick was rumored to be in line for the job.

By the winter of 1969, however, Rick’s ship to stardom has run aground. He’s reduced to playing episode-of-the-week villains and is contemplating a move to Italy for a shot in Spaghetti Westerns. His last chance at Hollywood relevance might be a Western pilot called Lancer, where he gets to chew the scenery as a Shakespearean-level baddie. Rick rehearses his lines the night before filming while floating in his pool and pounding whiskey sours. Yes, his work ethic leaves something to be desired. 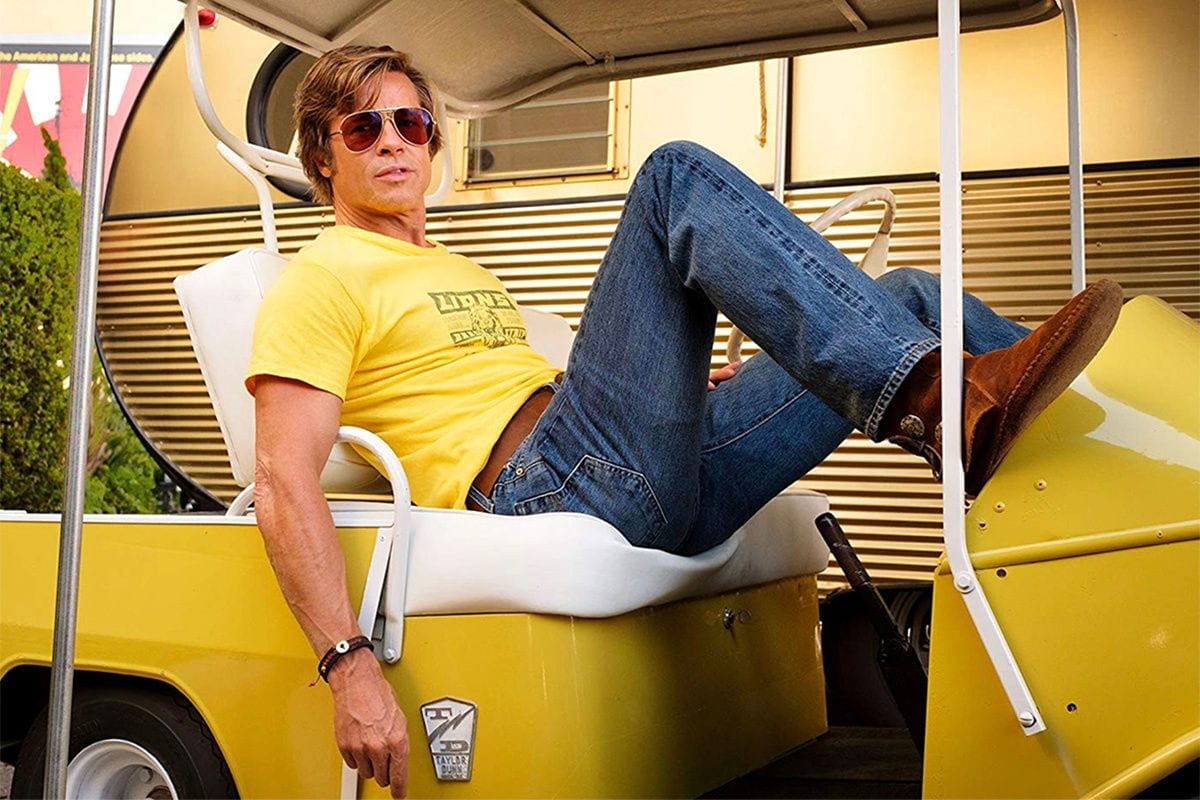 Never far from Rick’s side is his dedicated stuntman/personal assistant, Cliff Booth (Brad Pitt). Cliff looks like the living embodiment of a Ken doll, only with more scars. He’s generally reserved, though very adept when violence is required, even holding his own in a hilarious fight with Bruce Lee (the uncanny lookalike, Mike Moh). Cliff speeds around town in his giant convertible, recklessly maneuvering through traffic like a magic carpet. There’s even a rumor that he murdered his wife. Given the brief flashback of Cliff holding a speargun aimed precariously at his wife’s stomach, calling it a ‘rumor’ seems generous.

Circling around the periphery of Rick and Cliff’s good-natured shenanigans, a more sinister story takes shape. Slumming it in the mansion next door is the blonde bombshell Sharon Tate (Margot Robbie) and her beau Roman Polanski (Rafal Zawierucha)… and her other beau Jay Sebring (Emile Hirsch). When a mysterious man calling himself Charlie (Damon Herriman) visits the house, we quickly surmise that we’re watching the prelude to Tate’s real-life murder at the hands of Charles Manson’s infamous hippie cult, the so-called ‘Manson Family’. Before you get too depressed over the prospect of witnessing a brutal quintuple homicide, remember that this is the same writer-director who brought you Inglourious Basterds; reality is a relative term.

Tarantino expertly (re)creates an authentic late ’60s Los Angeles run amok with gas guzzling cars, iconic dive bars, and gratuitous neon. Cliff’s car radio is a constant companion, featuring not only musical hits from the day, but commercial jingles sure to ring familiar for anyone of a certain age. One could argue that Tarantino goes overboard with the musical accompaniment, but he’s careful to select songs that perfectly complement his film’s leisurely pace. It’s like a warm hug of nostalgia from the days when Hollywood was still in the dream business and movie stars walked on water.

These flourishes don’t exist simply to look stylish or evoke a mood, but to add subtext to a world in transition. Hunky leading men and fairy tales are yielding to greasy anti-heroes and detached irony. Tarantino has always been fascinated by men who don’t belong in the world anymore; violent and vulgar men whose code of conduct doesn’t conform to the encroaching civilization. Rick is the perfect Tarantino hero, cursing the hippie groundswell while still selling his soul to remain relevant. 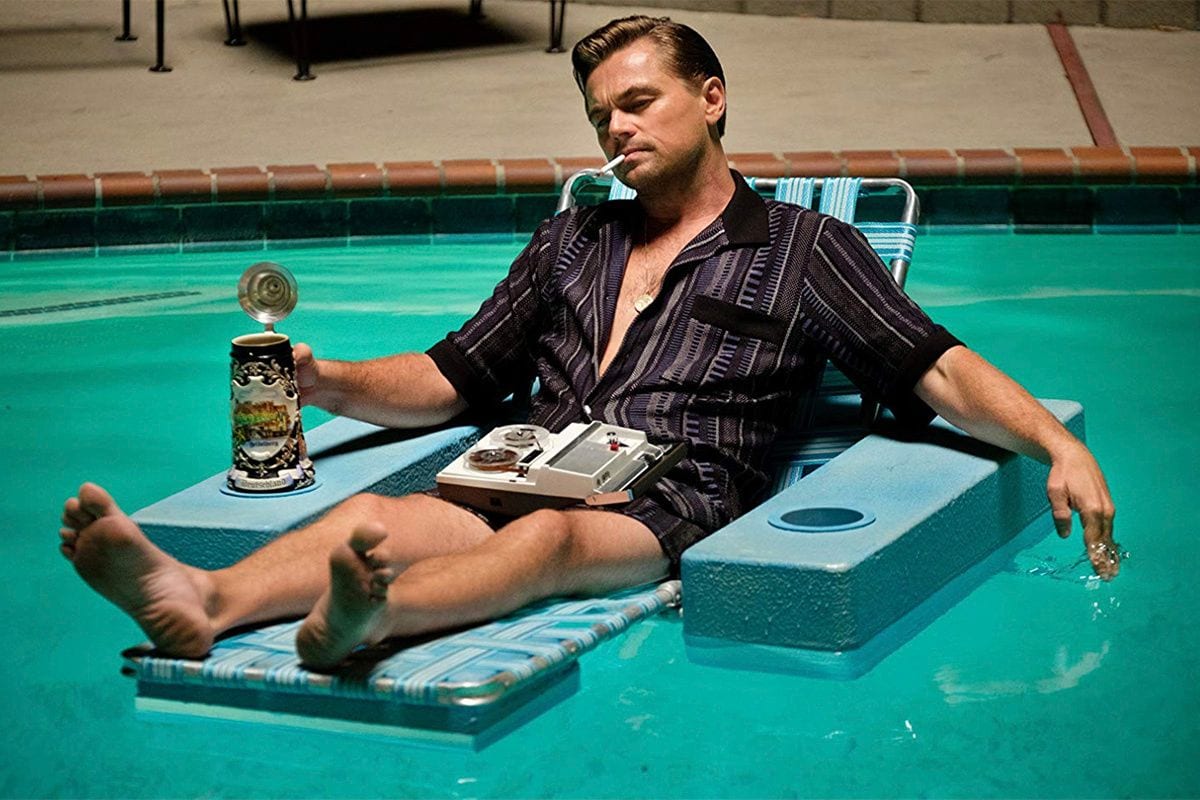 With restraint and understated sentimentality, Tarantino gives Rick and Sharon a chance to escape their insecurities through fleeting moments of professional recognition. The film’s emotional highlight, in fact, doesn’t even contain dialogue. Sharon attends an afternoon matinee of her recent film, the Dean Martin spy vehicle, The Wrecking Crew (Phil Karlson, 1968). As she hears the sparse theater crowd laughing appreciatively at her comic performance on the screen, her relief and happiness are palpable. She smiles sheepishly and props her bare feet on the seat in front of her. It’s a sublime performance from Robbie and a generous gesture from Tarantino to enable his actors, not his words, to carry the scene.

Every performance in Once Upon a Time… in Hollywood is first-rate. DiCaprio may not equal his physical zaniness from The Wolf of Wall Street, but his comic chops are sharp and he seems natural and organic in every dramatic scene. Pitt is effortlessly charming and sexy as Rick’s life-support system. He can make you swoon without taking his shirt off, but he takes it off anyway just because he can.

Tarantino is in top form with this film. His dialogue is like a blade, carving tension, humor, and momentum into each scene. There are also a number of spectacular camera slights-of-hand, including one shot where we hover above a massive drive-in movie screen before zooming into Cliff’s tiny trailer on the lot next door. And then there is the film’s finalé, which feels as though all of Tarantino’s restraint and self-control spontaneously evaporate into a burst of intense violence that leaves you giddy — and completely satisfied.

It’s possible that some fans will find Once Upon a Time… in Hollywood a bit too deliberate (and long at running time of 2:41). While it’s true the pacing of this film has more in common with the low key tempo of Jackie Brown, it delivers humor and heart in every scene. If for three hours, Once Upon a Time… in Hollywood forestalls cynicism and irony to indulge a simpler time in the world of make-believe.