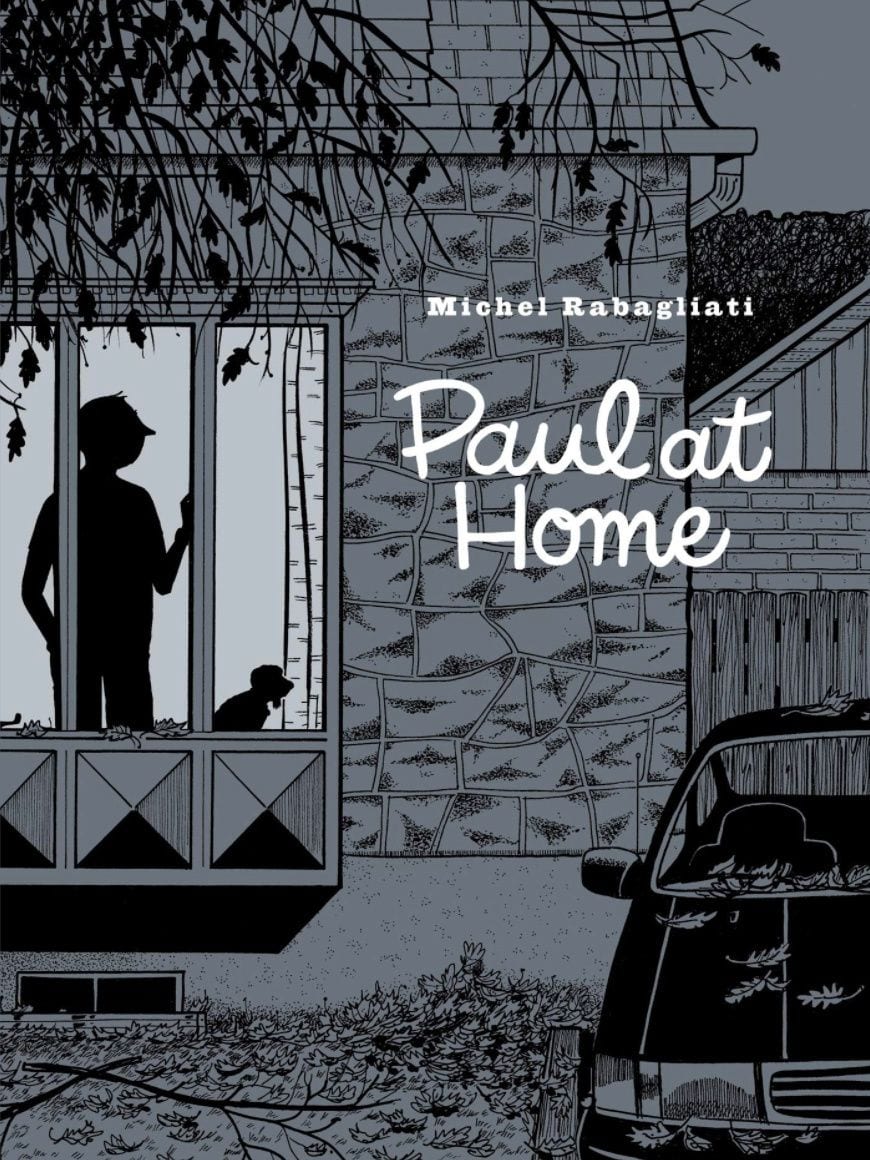 Loneliness. It’s a feeling we all know too well, especially during this year of COVID-19, when many of us have been confined to our homes, self-isolating and desperate for human connection. Filled with introspection, frustration, and disappointment, Paul at Home provides a much-needed space for reflection, reminding us that dissatisfaction is not a reflection of our failures, but rather a part of accepting change.

This latest installment in
Michel Rabagliati‘s semi-autobiographical series follows a significantly-older Paul, recently-divorced and living alone in the home he once shared with his wife and now-19-year-old daughter. The graphic novel opens with Rabagliati’s protagonist running errands for his recluse mother. Before we gain any insight into his mental state, we learn about the life of his mother, Aline.

Like Paul, Aline divorces in her early 50s and wrestles with loneliness and depression in the subsequent years. She struggles to find love, dating a widower who passes some months after they met before settling for a man she does not love to ease her solitude. That marriage too ends in divorce. Now, she lives alone in a retirement community, spending her days between doctors’ offices and her small apartment.

This exploration into Aline’s life is more than an aside. It’s quite keenly a reflection of Paul’s fears. Between his health anxieties and his fractured family, Paul fears living and, indeed dying, alone. Chatting in her small living room, Paul tells his mother that he’s not ready to date again. His mother, in turn, responds: “Ready? You don’t want to be alone at sixty-five, do you? Better get going!”

These first few pages introduce themes that ripple throughout the comic: solitude, tending to broken things, and a desire for human connection tempered by fear of rejection.

The graphic novel is split into seven parts, including an unmarked prologue and epilogue. Each section is preceded by an illustration of the apple tree in Paul’s backyard depicted in different stages of ruin. In its first iteration, only half of the tree is alive with lush bundles of leaves. The branches on the other half are bare, and bark peels from the trunk. By the end of the story, the tree is little more than a stump.

While these sections track the passage of time, they also mark the incremental loss Paul experiences. With each chapter, Paul must confront grief, mortality, and change. Between grappling with feelings of undesirability and accepting his daughter’s flight from the nest, he must also watch his mother refuse chemotherapy and pass away from rebounded cancer.

Central to Rabagliati’s comic is the feeling of alienation, which defines Paul’s personal relationships and his interactions with strangers. Despite being surrounded by people—in doctors’ offices and book fairs, on sidewalks and busses—Paul spends most of his time alone.

There are panel sequences filled with silence as Paul roams through the park or drives through the city. But most often, we flip through pages of Paul speaking to himself or silently listening in on others’ conversations. On those occasions, when he does engage in conversation, the interactions almost always end in disappointment or miscommunication. In one of my favorite scenes, an elderly woman shows him an iPad with a picture of a cat. Excitedly, he shares that he has the same iPad: “If you buy it online, you can even have your name engraved on it.” The confused woman asks, “You got your name engraved on your cat?” causing a sheepish Paul to backtrack and escape the conversation.

With countless interactions ending in rejection or misunderstanding, it’s no wonder why Paul keeps a stack of books at his bedside with titles like Single and Happy, Why Not Alone?, Stop Being Lonely, and curiously, Snoopy and His Friends.

From avoiding conversations with his next-door-neighbor Tonio to being ignored by strangers who prefer the company of a blue screen, Rabagliati repeatedly highlights Paul’s missed opportunities for connection.

He tries to initiate a conversation with a woman at a coffee shop in a sequence of disheartening events. He sits next to her, admiring her as she furiously types away at her laptop and mirrors the actions of all those around her—that is, everyone except Paul. When he greets the woman, she reacts with an acute unease that infects everyone else at the table. Humiliated, he leaves the coffee shop.

Later that night, he turns to online dating, scrolling through countless profiles with feline-inspired usernames and excessive exclamation points. He dismisses each profile with exasperated sighs and complaints of boredom.

In some of the most pitiful scenes, we see Paul sign to his ex-wife from his car, “call me”, only to be met with crossed arms and a swiftly drawn curtain. On several occasions, he seeks out time with his daughter, and each time she regretfully declines, having already made plans with her friends.

With bold lines, cartoonish faces, and springy movements, Rabagliati’s artwork is almost at odds with the comic’s melancholy. But perhaps it is precisely this contrast that makes Paul at Home such a delight to read. Amidst Paul’s loneliness and disillusionment, we also get glimpses of his wit and humor. As Paul describes the five stages of grief, we cannot help but smirk as we see his mother order the grim reaper to leave her home. Scenes that should cause distress like The Lord of the Rings’ Gollum snatching one of Paul’s eyeballs from its socket, instead make us laugh at the absurdity.

In a 2017 interview with Canadian magazine, Taddle Creek, Rabagliati shares details about this forthcoming graphic novel, the fifth in the series: “The character is older now than in the previous ones. He’s in his fifties, the weight of grief and of the trials of life show in his face and in his general appearance. He’s tired, disenchanted, and alone. This book will be the most autobiographical by far and definitely the most depressing of the series!”

Indeed, Paul at Home is brimming with moments of heartbreak, but through its humor and honesty, it also speaks to our sense of hope. The most powerful element of the graphic novel is the epilogue where Paul silently plants a young sapling by the stump of the old apple tree, which had to be cut down after succumbing to disease.

In this final scene, we recall a panel from the comic’s first few pages where Paul scans his backyard. Amidst the unkempt grass are empty pots and cans, overturned chairs, a grimy pool, and a half-dead apple tree. As he takes in the scene, he remarks to himself, “Everything here is dying…”

The disheveled backyard, once a place of joy and family, embodies Paul’s wounds. He tends to his backyard as a way to tend to his own fractured sense of self. Eventually, he realizes that things cannot be restored to how they once were. So instead, he decides to start anew.