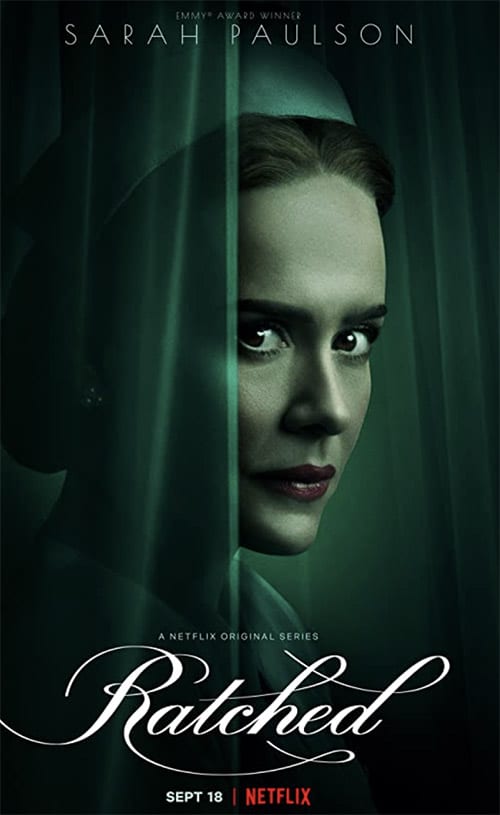 The opening credits to each episode literally show Mildred following a line of red tape until she confronts herself. Her doppelganger, dressed in her immaculate nurses’ uniform, smiles menacingly back at her. The line of ‘red tape’, which sympolises the governmental institutions that failed her, led Mildred to become a monster.

This underlying theme is also visible in the dramatic beginning of the first episode. Before we’re introduced to Mildred, the series begins with Tolleson murdering several priests in revenge for the rape of his mother, who was a nun. Tolleson’s actions catch Mildred’s interest, and she manipulates her way into a job at the psychiatric hospital where Tolleson is being evaluated. This first scene also hints at institutional sexual abuse and corruption in religion, which in turn has perpetuated further evil.

In this adaption, Mildred relates to some of the patients she is treating as a repressed lesbian coming to terms with her own sexuality. What’s more, contrary to what we’d expect from Fletcher’s Ratched, here Mildred openly criticises and defies techniques used to cure homosexuality. She even helps two women escape, telling them, ‘you said I didn’t understand but I do’.

This choice to have the character struggle with her sexuality, pursue a relationship with a woman, Gwendolyn Briggs (played by Cynthia Nixon), and ultimately to have both Gwendolyn and Mildred played by queer-identifying actresses reveals a greater effort and importance placed on creating meaningful depictions of people whose identities have historically been, at best, ignored in film and pop culture.

As Ratched season one is starkly different from the original book and film that inspired it, whether this new backstory takes away from the mystery and nuance of the original character has been subject to debate amongst reviewers. For Forman, Fletcher’s Ratched has timeless resonance. He interprets the character as not being aware that she’s “evil”, but believes she’s genuinely helping people. Ratched’s mysteriousness prompts others to see her as a symbol of ambition and control at worst; at best as somebody who perhaps went into nursing with the best intentions yet who has become embittered after years working within a strenuous and overlooked field.

While the new adaption is obviously more stylistic and dramatic to One Flew Over the Cuckoo’s Nest, Ratched isn’t necessarily void of nuances in nurse Ratched’s character. In choosing to reinterpret her and focus on the female villain, this allows the series to address the heavy criticism of misogynistic undertones, particularly in the novel.

For scholars like Phillip Darbyshire, who wrote the 1994 feminist critique, Reclaiming ‘Big Nurse’, Kesey’s breakout novel was a critique of institutional power and second-wave feminism. Darbyshire notes that the patients see themselves as ‘victims of the Matriarchy’; the female characters ‘…are the ones who exert control, in a way that is harsh, non-domestic, and emasculating’. Disturbingly, Harding (William Redfield) and McMurphy discuss that the only ‘effective weapon against strong women [is] the penis and rape’.

Whether part of our cultural hatred for Ratched is due to her exerting power over men is a point that Paulson brings up in an interview with Them magazine: ‘The question is would we have hated the character so much if a man were playing it? We come up against our own expectations that a woman who is a nurse should be maternal and soft. If not, she’s a villain.’

While certain themes found in One Flew Over the Cuckoo’s Nest remain pertinent — such as a desire to revolt against authority and the discussion it raises on treatments and stigmatization surrounding mental illness — the lingering sexism is outdated. Thus, giving context to the female antihero of Cuckoo’s Nest sparks renewed interest in the story and highlights the relevancy it still holds.

The greatest fictional villains generally hold some form of power over the hero. The Nurse Ratched of One Flew Over the Cuckoo’s Nest is among our best storied villains, given her manipulative nature paired with the control she holds over her patients, as well as her as yet unknown motives for acting callously. The original novel and are very distinctive from this modern reimagining – especially as Ratched‘s Mildred Ratched is a victim herself. Whether you prefer Fletcher’s straightforward villainy over the more dramatic and in-depth exploration of the character in the television series, each portrayal of the infamous Ratched reflects what has changed in American society’s attitudes toward women — and what has not.