When my insomnia and I started watching Red Sparrow at 1:00AM, I was expecting a mildly sexist spy thriller full of intrigue and seduction that would serve as gentle entertainment to lull me to sleep. What I got instead was a disturbing, brutally violent inquiry into whether women can ever have sovereignty over their bodies, where technically the plot had spies.

The film, directed by Francis Lawrence, follows a Russian ballerina named Dominika (Jennifer Lawrence), who lost her career after a rival broke her leg and, through her uncle’s manipulation, has been forced to enroll in the “Sparrow” spy training program under penalty of death. Based very loosely on real programs that once existed in Russia, the Sparrow School, headed by a cruel and nameless matron (Charlotte Rampling), teaches young intelligence agents to read the sexual desires of their targets and overcome whatever revulsion they feel in order to seduce them and gain information.

Although it makes up only a small part of the overall film, Dominika’s stay at the Sparrow School – or the “whore school”, as she later calls it – gives us a great deal of information about how Red Sparrow approaches questions of power, domination, and misogyny. After several painful scenes of humiliation and sexual violation, the whole sequence reaches its climax when one of Dominika’s male classmates tries to rape her and she gets in trouble for beating him up. The ultimate fallout is that the matron commands her – in a scene that’s powerfully directed, in so far as it’s nauseating to watch – to “give him what he wants” by having sex with him in front of their class.

Red Sparrow has received mixed reviews since it premiered in February. While Jennifer Lawrence and Francis Lawrence have tried to frame the film as empowering, it’s been received at best as subversive, and at worst as “a sexual fantasy for men who like to think they’re feminist”, with critics waffling over whether it’s a sexy spy thriller or torture porn. We agree that it’s a film about a woman who tries to reclaim a sense of agency by using her sexuality – and the way she’s been sexualized and objectified by others – as a tool and a weapon. What we disagree about is whether that strategy – a strategy that women have recently been encouraged to adopt, and that some have come to think of as being deeply feminist – at best leads to a pyrrhic victory.

Although it’s easy to make comparisons between Red Sparrow and Atomic Blonde (David Leitch, 2017), Salt (Phillip Noyce, 2010) or male-led spy films like The Bourne Identity (Doug Liman, 2002), the film I’m most reminded of is Dangerous Minds (John N. Smith, 1995). There’s a scene in the middle of that movie where inner-city high school students debate whether or not it’s true that they “always have a choice” regardless of circumstance. Their conclusion is that, when someone puts a gun to your head, you can’t choose whether to die; you can only choose whether to scream.

Rightly or wrongly, in a way that’s both somewhat uplifting and deeply depressing, Red Sparrow is about Dominika choosing not to scream – choosing a how of being victimized that allows her to hold on to some sense of dignity and agency – a way that allows her to hurt and humiliate the men who attack her, even as she’s still forced to suffer their abuse.

The film suggests to us that the life Dominika leads as a sparrow is, in some ways, just a more explicit version of the arrangement she had as a dancer. She’s told by a well-meaning stranger that she was only able to have that career because “they” let her — “they” liked looking at her. It pleased “them” to allow it. We see with our own eyes, during an extended opening sequence, that a regular part of her job is to suffer the advances of powerful men at whose pleasure she is allowed to perform. Her life can be less unpleasant if she learns to play their game – which is what we see her do, over the course of the film – but there’s no option to refuse the game entirely unless she wants to end up destitute — and eventually, dead. 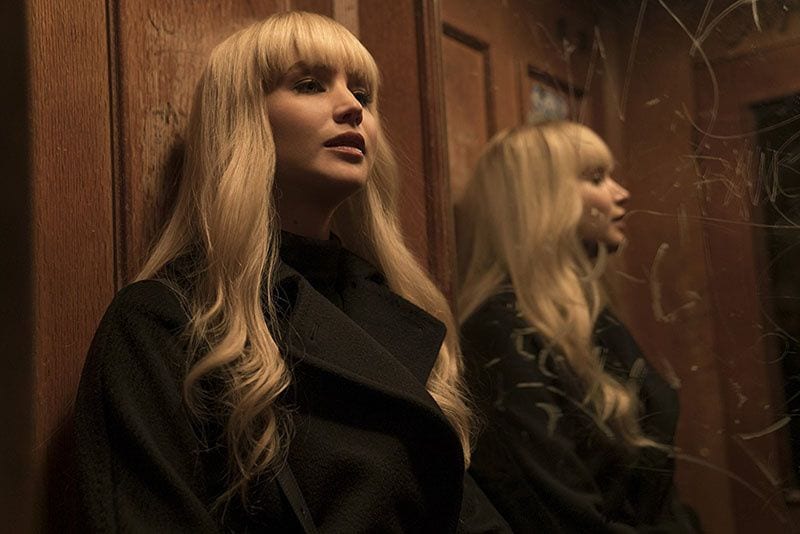 Although the plot concerns the question of whether Dominika, once she’s graduated and become a full-fledged spy, will stay loyal to the Russians or defect to an American agent named Nash, Red Sparrow is ultimately about whether Dominika can apply the harsh lessons she learned in Sparrow training well enough to play both sides and find a way out of the situation. It’s a plan that involves handing herself over for days of torture, betraying another Russian intelligence officer, and seducing her uncle along with Agent Nash. It’s a chess game where Dominika’s strategy is to sacrifice more pieces than anyone else would expect in order to position things for her final move. It’s possible to read this film as a story about how women’s real strength comes from how much suffering we can tolerate. But there’s something else to be considered about Red Sparrow.

The philosophy that Dominika’s empowerment operates on is a philosophy that says, “If I give this to you, you can’t take it from me,” and one that assumes there’s no condition where I get to keep what’s mine.

Showing everyone your naked body and cultivating a sense of pride in how you look makes it harder for people to shame you with nudity, just like telling everyone your secrets makes it harder for people to threaten you with exposure. Sometimes we give up our privacy to guarantee that we have control over how the things that are precious to us leave our hands.

There’s a parallel story to Red Sparrow, that Jennifer Lawrence has spoken publically about. In 2014, she was the victim of a sex crime in which her intimate photos were stolen and posted on the internet. The robbers violated her right to safety and privacy in a public way that made her a spectacle for anyone unscrupulous enough to look, and she’s described her role in Red Sparrow as a chance to take back control. Without presuming to judge that choice – or to judge Dominika’s choices, either – it feels good to know that women are trying to reclaim their bodies and their sexuality, and it’s sad to think that maybe our only option is to rid ourselves of shame and fear so that it’s harder to hurt us.

That’s why the people who find Red Sparrow empowering and the people who find it misogynist are both right. Doing to yourself what others threaten to do to you is a way of shifting the power dynamic, but it also doesn’t reverse the power dynamic. The real mistake is not in thinking that women can take back some sense of control by deciding how to be objectified – it’s in thinking that that decision constitutes a total victory over the system that objectifies them in the first place. It’s (at least arguably), it’s a good thing to do — but it’s also not enough.

There are many reasons to knock this movie – the huge technical problem with the actors’ accents being one – but, at its heart, Red Sparrow is focussed on questions that are tragically important: What does it mean to survive a life of domination that you’re powerless to overthrow? How can you insulate yourself from that experience? If you can find a way of living in that world that hurts less, is that wrong?

I don’t know the answers to those questions, but I’m interested in the conversation, and I think Red Sparrow is contributing more than an example of pure exploitation.