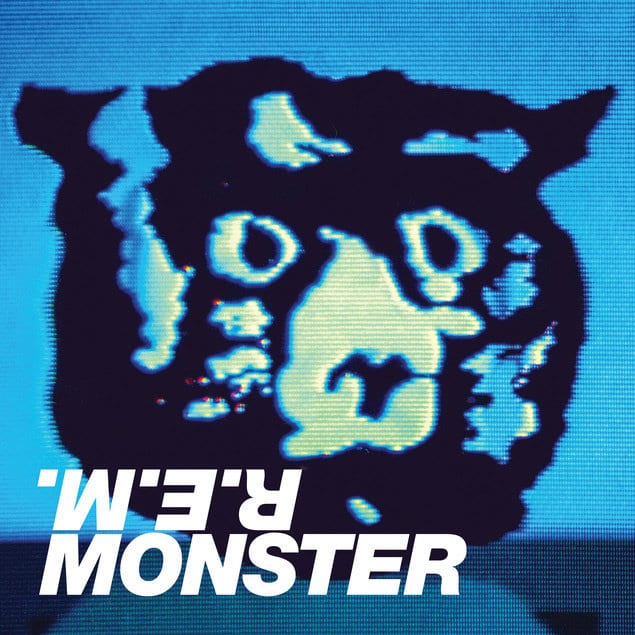 In 1992, R.E.M. released what many consider to be the crown jewel of their recorded output: the dazzling, stylistically diverse Automatic for the People. Orchestral touches, creative acoustic arrangements, ballads, and a sprinkling of rockers – not to mention a handful of bona fide hit singles – made it arguably the band’s most accomplished moment and won raves from both fans and critics.

But R.E.M. have never been satisfied with the idea of continuing along a steady, predictable path. With that in mind, their next album, 1994’s Monster, saw the band turn up the amps and move distortion and effects front and center. In many ways, it’s the antithesis of Automatic: blunt hammer strikes from a group known more for precision instrumentation, meditative moments, and the college-rock staple of jangly, Byrds-inspired guitars. Critics mostly applauded the change of pace, while a lot of fans were taken aback by the new approach. It was considered by many to be a folly, a misstep. It’s been pointed out on more than one occasion that Monster later became infamous for its common presence in the bargain bins of used CD stores. Rarely has an album that debuted at the top of the U.S. album charts been so quickly sent back into the retail world.

In keeping with their tradition of reissuing R.E.M. albums on their respective 25-year anniversaries, Craft Recordings – who previously went all out with new editions of Automatic for the People, Out of Time, Green and Document – have outdone themselves with a lavish, deluxe six-disc version of this highly misunderstood and absolutely essential entry in the R.E.M. canon. It’s been said that Monster was R.E.M.’s reaction to the then-massively popular grunge movement. Vocalist Michael Stipe admits as much in the reissue’s generous liner notes, saying that “the whole Seattle scene had exploded and felt so vibrant and alive. In a way, Monster was our response to all of that.” But he also adds that the inspiration of glam rock played an equally large part in the album’s sound. “I liked the idea of something that was a bit removed,” he says, “and glam rock always felt to me a little tongue-in-cheek…self-aware, and slightly removed.”

But Monster isn’t just about clinging to different genres – it also involves the idea of a band shedding its identity. “We were trying to feel like a different band,” says guitarist Peter Buck. “We wanted to get away from who we were.” Clearly, if the goal was for R.E.M. to hit the reset button, Monster succeeds massively. The deluxe edition documents all aspects of the transformation. The first disc is the original, 12-song album, while disc two is a collection of demos. Disc three is a new remix of the entire album, and the fourth and fifth discs make up a 1995 Chicago concert. The final disc is a Blu-ray that features a 5.1 surround sound mix, a hi-resolution audio mix, a concert film, and various music videos. If you want to immerse yourself in a true Monster experience, this is the way to do it.

The remix disc may be most highly anticipated among hardcore R.E.M. fans because it gives them a chance to hear the album in a new, possibly more palatable light. This is partially true. Producer Scott Litt was never satisfied with the grungy, claustrophobic sound of the original mix (and was not afraid to make his feelings known to the band at the time) and vowed to remix it as he saw fit eventually. This deluxe edition is Litt’s chance, and as a reimagining of the album, it’s not completely different from the original; the differences range from unnoticeable to subtle to occasionally striking. Stipe’s vocals are higher in the mix, so he’s not so much drowning in a sea of guitars. Almost everything sounds fuller and textured. Speaking personally, my one major gripe with the remix is that the new version of the opening track (and first single) “What’s the Frequency, Kenneth?” eliminates Buck’s staccato guitar chord slash that frequently appears throughout the original version. As one of the defining sonic moments of the album, taking this out seems like a weird choice. It’s like remixing Radiohead’s “Creep” and taking out Jonny Greenwood’s iconic “cha-chunk, cha-chunk” pre-chorus guitar attack.

But I digress. Making an A/B comparison between the original and remixed tracks can be a fun, uber-fan project. But it also allows naysayers to reassess and the album that, for all its occasionally forbidding production choices, contains a great deal of highly imaginative and inspired songwriting. “What’s the Frequency, Kenneth?” is still a catchy slice of garage-rock fun. The glam swagger of “Crush With Eyeliner” sounds better than ever – Buck’s strobe guitar effects are paired up with a more subtle, measured guitar track that was previously unheard in the original version. More menacing songs like “Star 69” and “Circus Envy” certainly sound nothing like the elegant, piano-led balladry of “Nightswimming” or the stark minor-key dirge of “Drive”. But their urgency speaks to the band’s punk roots and probably wouldn’t sound totally out-of-place on a Murmur-era setlist, albeit with the guitars turned down a couple of notches.

Despite the wall-of-guitars nature of Monster (even in the remixed version), the album sees the band exploring some more nuanced styles. “Strange Currencies” is a ballad that mines the same musical territory as Automatic‘s “Everybody Hurts” and was influenced, according to Stipe, by the late INXS vocalist Michael Hutchence. Stipe refers to Hutchence in the liner notes as “a great pop star, astonishing frontman, and a brilliant lyricist”. On the weirdly lovable “Tongue”, Stipe injects a falsetto into the soulful musical landscape of a song told from the viewpoint of a woman in an emotionally abusive relationship. “Call my name / Here I come,” he croons over deceptively simple piano and organ chords. “Your last ditch lay / Will I never learn?” Aside from being somewhat of an oasis in the middle of more guitar-driven tracks, “Tongue” also sounds uncannily like a rough draft of “At My Most Beautiful” from the band’s 1998 album Up (minus the Pet Sounds orchestral fussiness).

But the more guitar-oriented tracks are hardly devoid of emotional punches. On “Let Me In”, Stipe is accompanied solely by slashing electric guitar (courtesy of bassist Mike Mills) in a song written as a tribute to the recently deceased Kurt Cobain. The song’s power, especially to anyone familiar with its initial inspiration, is palpable. “It’s Michael’s cathartic release in response to the loss of a good friend and someone we all felt creatively aligned with,” says Mills in the liner notes. “We had lost a friend and an ally.” The remix omits Buck’s haunting organ coda, underscoring the song’s stark nature.

As far as the Monster demos go, the collection is a curious one in that – unlike the demos for the Automatic for the People reissue – none of the demos morphed into Monster songs. Most of them have a “classic” R.E.M. sound, sounding like somewhat generic versions of the band’s earlier works. A few of the tracks ended up on post-Monster albums and projects: “Revolution” became a staple of the band’s 1995 Monster tour setlist and was included on the soundtrack to the 1997 film Batman & Robin. A couple of other songs found life on later albums like Around the Sun and Accelerate.

The 1995 tour supporting Monster was a huge success but plagued with health scares for the band. Drummer Bill Berry collapsed on stage in Switzerland due to a brain aneurysm. Mills had to undergo intestinal surgery, and Stipe also went under the knife to have a hernia repaired. As a result, multiple dates were rescheduled, and the tour – the band’s first since 1989 – was ultimately a success. The discs from the Chicago concert show a band revitalized by the new material, which meshes surprisingly well with the older songs. Two of the songs from this show – “Undertow” and “Departure” – ended up on the 1996 album New Adventures in Hi-Fi, an album written and recorded entirely on the Monster tour. To say this was a creatively fertile time for the band is a massive understatement.

The video elements on the Monster reissue are satisfying but not exactly hard-to-find nuggets from an undiscovered vault. The previously released concert film Road Movie is a solid, no-frills recording of their 1995 run of shows at the Omni in Atlanta, and the music videos – including clips for six Monster singles – are a fun trip back in time. Die-hard fans might pine for the inclusion of Rough Cut, a fly-on-the-wall backstage documentary from the tour, but that’s easy enough to find on YouTube.

Monster may seem, at first glance, like an anomaly in the R.E.M. catalog, but in reality, it fits in exactly with the way the band has always done things. These four musicians (pared down to three after Berry’s 1997 departure) were always looking to expand their sound, pushing themselves further and constantly confounding expectations. But in the end, it was always about doing what they felt sounded right. “You have to make music for yourselves,” says Mills in the liner notes. “You have to be happy with what you’re doing, and though you want people to like it and come along for the ride, that’s all up to them. You can’t force them, and you can’t pander.” With love, as the song goes, come strange currencies.