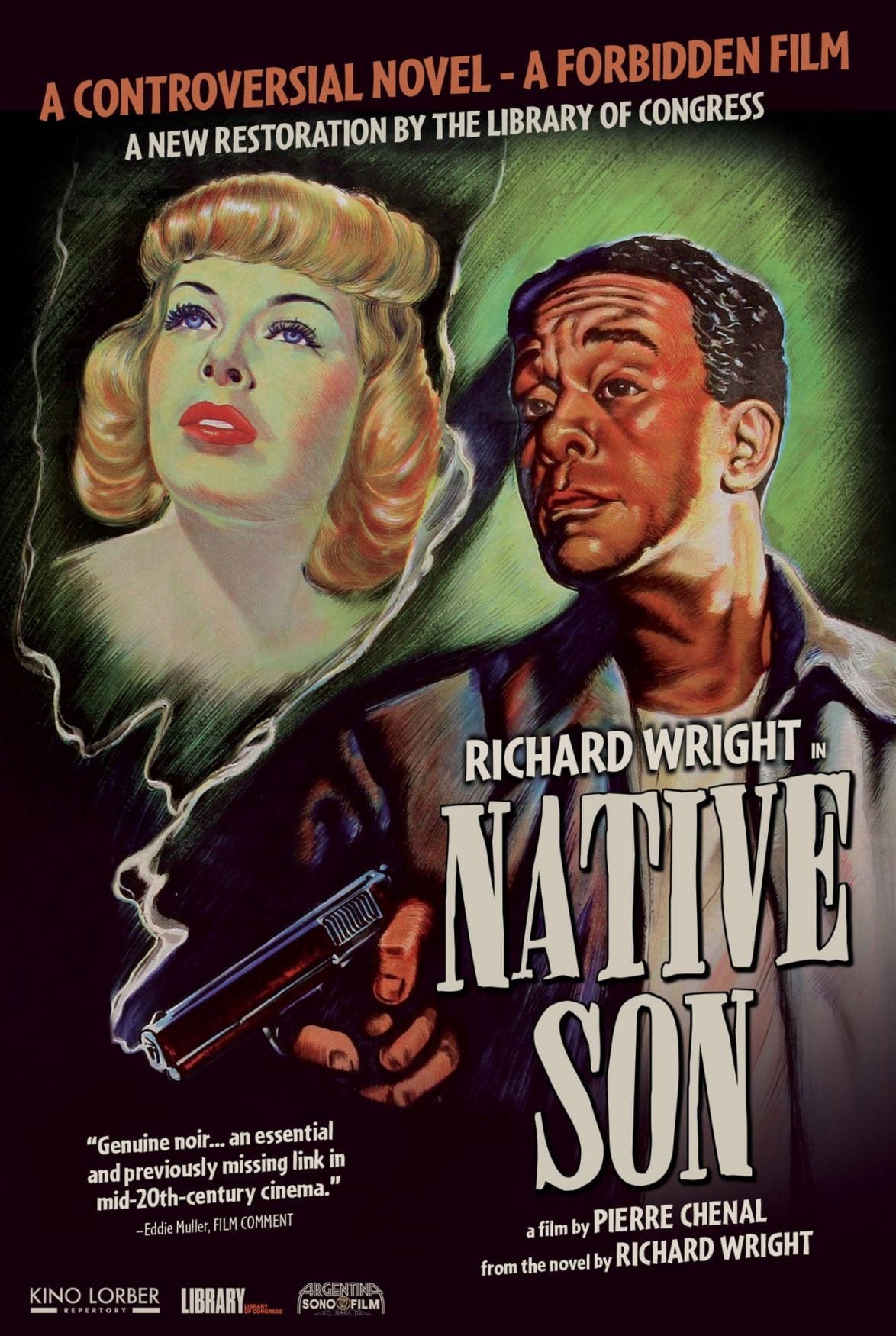 Don’t push me ’cause I’m close to the edge
I’m trying not to lose my head
It’s like a jungle sometimes it makes me wonder
How I keep from going under
– Grandmaster Flash and the Furious Five, “The Message” (1982)

Native Son isn’t exactly the type of novel one would think could translate well to a Hollywood film. It’s dense with the troubled protagonist’s inner monologues, it raises uncomfortable points about race and class in America, and there’s no happy ending in sight. Yet, that hasn’t stopped people from trying. Three filmmakers have taken a whack at it — Jerrold Freedman’s 1986 film and Rashid Johnson’s 2019 HBO film — but Pierre Chenal’s 1951 film might be the most effective, not least because (and in spite of) the novel’s author was directly involved.

Richard Wright published Native Son to widespread acclaim in 1940. It tells the story of Bigger Thomas, a young, impoverished Black manchild living fatherless in a tenament in Chicago’s South Side, whose chance at a better life goes horribly sideways. It captured a slice of American life non-Black readers had no clue about, and Black readers knew all too well.

But Wright wasn’t content to let the story end there. The novel was transformed into a Mercury Theater stage play in 1941 withCanada Lee as Bigger (Wright and John Houseman rewrote the script at the last minute, to the surprise of Paul Green, the contracted playwright), and Wright had a notion that the story could play as a film too (he had submitted pitches to Hollywood studios for other ideas, which were all rejected). But with Cold War anti-Soviet Union paranoia settling in by the late ’40s, the climate was nowhere near right for a story with a side character who encourages Bigger to learn about the Communist Party.

By that time, Wright had decamped to Paris, where he heard about the interest of Argentinian producer Jaime Pradès and director Pierre Chenal in bringing his novel to the silver screen. Wright signed on, and worked on the screenplay, with the stage script as a jumping-off point.

Filming permission was denied in Chicago, so Pradès and Chenal reconstructed South Side buildings, dilapidation and all, in Buenos Aires (although some exterior shots were filmed in Chicago surreptitiously). It took some time to assemble a cast willing to take on such racially and politically charged subject matter, but eventually American actors were flown down to Argentina for principal shooting. Lee was the first choice to play Bigger again, but turned it down, so Wright got the call. Doubting his suitability for the role (he was not only twice as old as the character, he also wasn’t a trained actor), Chenal told him to “just live Bigger’s nightmare.”

The film was a hit in Argentina (retitled as Sangre Negra), but heavily bowdlerized when it arrived at American theaters, leaving it incoherent to many who saw the censored version. Fortunately, an uncensored print existed and was discovered years later in the collection of an Argentinian film buff. An introduction produced for the current release explains the amazing chain of providence that resulted in this complete version of the original film, and this 2012 Film Noir Foundation blog post goes into further detail.

The remastered version, now screening online through Kino Lorber Repertory in association with the Library of Congress, a Fernando Martin Peña and Argentina Sono Film, is nowhere near as bad as previous historical views, based on the edited versions, have had it. The faults are obvious, but compared to the Freedman and Johnsons’ versions of Native Son in more recent times, this version more acutely captures the race-driven existential dread at the heart of Wright’s masterwork.

Any discussion of this Native Son film begins with casting Wright as Bigger. It’s hard to picture a grown man making some of the choices Bigger makes, and Wright’s admittedly meager skills as an actor come into play more than once. But the strength of the screenplay and Chenal’s direction (including casting men larger than Wright in the roles of the white authority figures – Bigger’s employer; a private investigator; and the media on the scent of a hot story) reinforce Bigger’s powerlessness away from his known world, however cruel, in the heart of Chicago’s South Side.

That choice, ironically, further casts Bigger as a Black Everyman, or an Every Black Man figure. We see him not as an actual 20-year-old, but as any Black man caught in a bad situation. It isn’t hard at all to see the contrast between Wright’s Bigger in his South Side milieu–full of anger, swagger and hope–and in the presence of his employers, where he subsumes all that to curry favor and keep his job. That dynamic, an early cinematic example of code-switching, hasn’t changed all that much over the years, except in the most blatant contrasts between the two extremes.

The film deviates further from the novel in the portrayal of Bessie Mears, Bigger’s girlfriend. Instead of a domestic worker, she’s now an aspiring nightclub singer, played by Gloria Madison (who sings a song, “The Dreaming Kind” by Lillian Walker Charles — not to be confused with the Sheryl Crow song of the same title — that never became popular in real life, and for good reason). Despite the change, she captures three emotional moments that will likely resonate for Black women watching the film now: the optimism of fresh possibilities, the suspicion of a white woman taking an interest in her man, and the ride-or-die support of her man in the hardest moments.

They might also recognize Bigger’s murdering Bessie out of a paranoid suspicion that she’d snitched on him, as yet another instance of Black female lives not mattering, even to some Black males. That will be a problem for many contemporary viewers, but Wright considered it essential in depicting the transformation that had been wrought upon Bigger.

But the central conflict remains intact from the novel. Bigger, ringleader of a gaggle of petty thieves, gets a real job, thanks tonoblesse oblige, as a chauffeur in the service of the Daltons, a wealthy white family. His first trip is to take their daughter, Mary (Jean Wallace), supposedly to her college campus for some evening study. But she has no intention of that; she instead directs Bigger to pick up her boyfriend, left-leaning Jan (Gene Michael), so they can go slumming on the South Side (not as if they were the first or the last to do so).

They land at the club where Bessie is making her singing debut; file under “awkward”. Don’t feel alone if the nightclub scene with Jan and Mary, whose presence with Bigger doesn’t please Bessie one single bit, seems like an example of what we now might call naïveté at best. White privilege is especially jarring when Mary barges into Bessie’s dressing room to compliment her on her singing and give her a flower.

Mary ends up getting too sloshed to walk, and Bigger carries her up to her room and drops her in her bed. How often have Black servants covered up for the indiscretions of their white employers? But when Mrs. Dalton (Ruth Roberts), who is blind, happens to come in and wonder what’s going on, Bigger silently presses a pillow on Mary’s head so she doesn’t betray his presence in the room. Without trying to, Bigger suffocates Mary, and at that moment, Bigger’s world unravels; note the exaggerated panic on Wright’s face once he discovers what he did.

What’s left, as the story plays out more or less along the lines of the novel, is a fairly tight film-noir–no pun intended. The racial contrasts aren’t always spelled out in bold pronouncements from the rafters. Still, it effectively communicates the condition of a Black man caught between two worlds, in which one wrong step can spiral hopelessly out of control. As evidence of that condition, expect copious use of the N-word throughout the film, as well as references to lynching.

In that respect, the original Native Son film is historically important as one of the few examples of film noir with Black protagonists. Much of it still feels true to certain emotions within the Black experience, for all its faults (one wonders whether Wright did his own stunts running across rooftops as the police bore in on him, which might have been a cinematic first for any author). However, other aspects are as dated as films from 70 years ago will be. It may strike viewers as rather surprising how easily Wright’s novel, considered a classic work of social realism, plays like film noir, the story of a man struggling against forces he knows to be far larger than he can tame.

If anything, Native Son‘s progenitors are neither of the other two film versions: Freedman’s film, which downplayed the more troubling aspects of the story (excising Bessie’s murder from the script); and turned it into something like a Very Important After-School Special; and Johnson’s 2019 version from a screenplay by Suzan-Lori Parks, in which Bigger lives in a nice neighborhood and channels his alienation through punk rock (and in which he does not kill Bessie).

If you want to discover where the original spirit of Bigger’s story, now lives, listen to hip-hop. Storytellers from Grandmaster Flash and the Furious Five to Tupac to Meek Mill have told thousands of variations on Bigger’s American life, a young Black man unable to break out of the chains that set to define him. Not to mention the cinematic imagery of the best of those songs.

All of the longing, frustration, and rage in their lyrics, Wright first set to paper 80 years ago. Small-scale crime as a means of survival, the knowledge that a better life is out there but way beyond reach, fear, and defiance in the face of the law–it’s all there in the novel and the original film, told far more jarringly here than in the remakes. You’ll find it in any number of rap parables, many of which have a noirish quality of their own.

The original Native Son isn’t just a historical curiosity of film, if for no other reason than because it’s a flowering of an American archetype that, sadly, still bears currency. But as with just about any page-to-screen adaptation, read the book first. Not only to appreciate the differences between the two but because the message inside Wright’s harrowing tale remains one America has yet to digest fully.