It’s difficult to describe the exceptional weirdness of Patrick Kyle‘s Roaming Foliage. For once, the adjective “unique” is accurate. I’ve literally never read anything like it. Explaining why that’s such a wonderful thing — not just for Kyle but for comics generally — will take some explaining.

First, consider the physical book. It’s the height of a standard graphic novel (picture anything from Marvel, DC, Image, etc.), but it’s oddly wider—which, for me, recalls the dimensions of a children’s puzzle book. Or maybe that’s just the paper quality. It’s cheap. I mean really cheap—the pulp grade that defined comics until the ’90s. This is atypical even for an atypical publisher like Koyama Press. Compare it to the luxuriously thick, white pages of Nathan Gelgud’s A House in the Jungle or Britt Wilson’s Ghost Queen, both released by Koyama at about the same time, and you’ll understand that Kyle and the press made a deliberate, aesthetic choice for Roaming Foliage. The feel of those grainy, gray pages is part of the intended reading experience—one that conjures a time before not only webcomics, but before the internet. And, if this doesn’t strain interpretation too far, I can’t help but think of the recycled paper as a nod to the “foliage” of the title: you’re holding what was once literally foliage that has unwittingly roamed remarkably far.

The other reason I think of children’s puzzle books is Kyle’s drawing style. At first glance it looks like a kindergartener with little respect for stay-inside-the-lines conformity scribbled over the cover and contents. That’s a compliment. Closer inspection reveals how those scribbles are artfully and probably meticulously achieved. I especially admire the variation in line quality. Though the same pen may have made most of the marks, Kyle appears to shrink and enlarge his images, at times accenting the thickness of a scraggly line, other times creating thinly miniaturized precision.

How those lines combine is weirder still. Most comics pages can be analyzed in terms of layout, with framed rectangular panels spaced to create gutters that then form rows and columns for easy reading flow. Not here. While Kyle draws some frames, they are usually inset into other images, and there’s not a traditional gutter to be found anywhere in the book. Though Kyle’s reading paths do follow a standard left-to-right, top-to-bottom format, there’s nothing easy about that flow. At least not until you acclimate to his pastiche environment of borderless overlap that defines his approach to image juxtaposition. Where does one image stop and the next begin? Hard to say. Since comics are defined by the juxtaposition of discreet images, that lack of division digs at the roots of the entire form.

Those line and image combinations also represent a story world, one described on the back cover as “the wild overgrowth of a mysterious and magical garden.” Those words probably conjure an image in your head, something roughly naturalistic in style, with clearly defined trees, leaves, bushes, paths, maybe some sky visible above the treetops. Wrong garden. Actually, wrong universe.

Though Kyle does draw a variety of vegetation, the drawn elements don’t combine according to the rules of three-dimensional representation. Kyle’s world isn’t necessarily flat (some shapes are drawn as if in front of other shapes), and he doesn’t abandon perspective entirely either (a branch, for example, leans above another branch to suggest a specific angle of observation). But in comics, even ones drawn in the most minimalistic and exaggerated style of cartooning, we expect a stable setting. 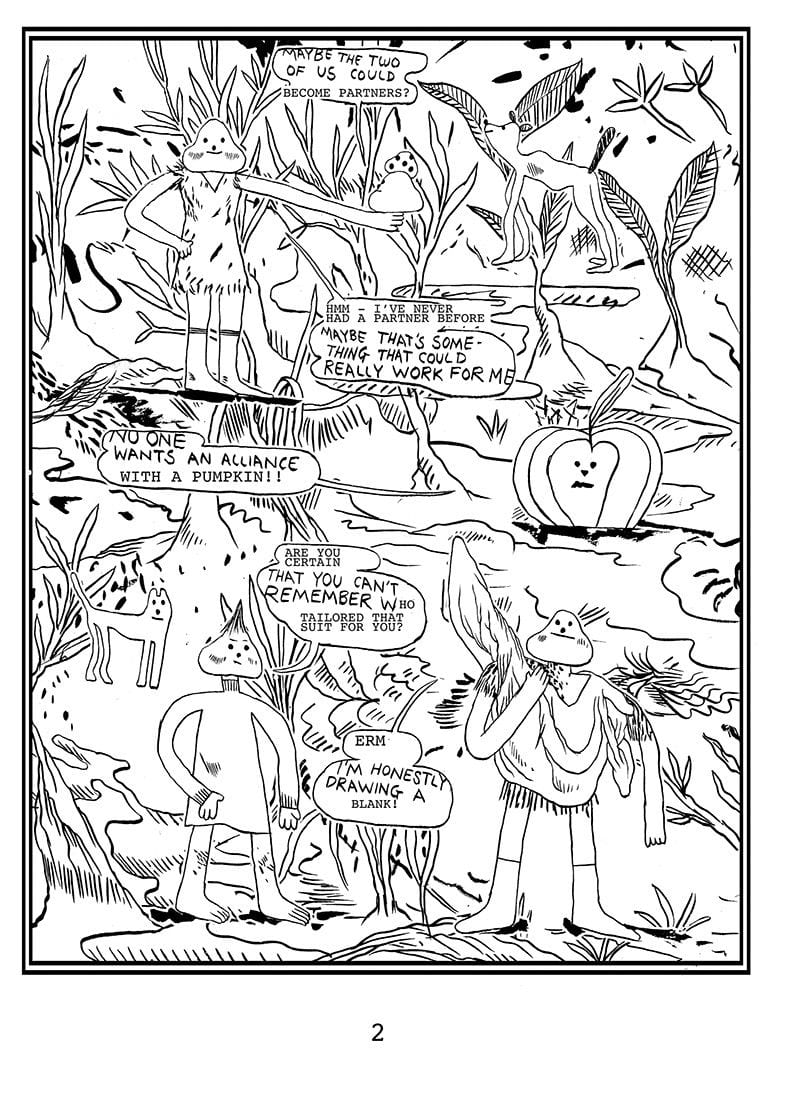 Cartoon humor, however, often violates the rules of a stable universe: Calvin’s body (of Calvin and Hobbes) flies apart as he yelps in his surprise, Coyote (of Wile E. Coyote and the Road Runner) hovers mid-air before plummeting down a ravine. But these violations of physics are only possible because the story world has a mostly stable set of physical laws. Kyle’s has none—or at least surprisingly few. Both his readers and his characters wander through his semi-representational ink marks, searching for meaningful paths.

And those characters, the most central and repeatedly drawn objects in the garden and graphic novel, are perhaps the weirdest of all. Again, according to the back cover, the cast should be clear enough: “two boys, a girl, a small head without a body, a humanoid robot and a pumpkin.” Okay, so even in a naturalistic style that would be pretty damn weird, but in Kyle’s hands, it unearths yet another root of the comics form. According to some definitions, a comic has to include a continuing character (Colton Waugh) or a set of recurring characters (M. Thomas Inge) or simply recurrent characters (Bill Blackbeard)—all of which require recurrence: the experience of a viewer understanding that a cluster of lines in one panel or page represents the same thing as represented by a similar but inevitably different cluster of lines somewhere else. That’s so utterly basic an expectation, readers rarely make it conscious—until you’re reading Roaming Foliage.

The novel opens with a turnip-like head drawn above two lines (which could either be a bodiless neck or two very thin legs) standing before a set of flowing lines that (we learn later from the text) represent a suit of clothes (why the clothes appear to be partially levitating is one of many physical phenomena that goes unaddressed). In the next (in this case, clearly divided) image a pair of arms materializes below the head in roughly the position a humanoid character would have arms—though no lines connect them to the head, and the rest of the implied body is undrawn. 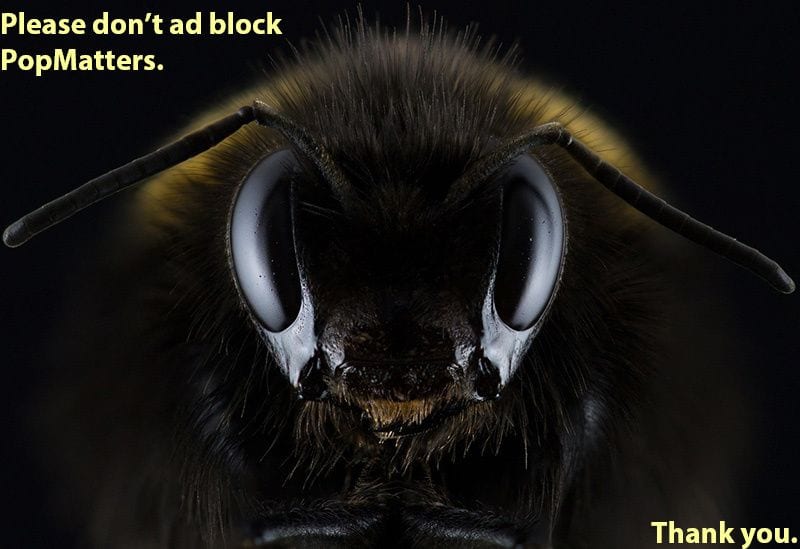 Turn the page, and the figure now also has legs and a newly clothed torso. But that’s not the peculiar part. Page three features five speech balloons pointing at five drawings, which I understood at first to include at least one recurrent character. Given the instability of anatomy and the physical world generally, the repetition of the head shape, and the collage-like lack of panel divisions, I figured the same head was sometimes attached and sometimes not attached to a body that sometimes appeared to be wearing a set of wavy lines and sometimes not. Wrong. These are five distinct characters with distinct visual characteristics that Kyle repeats consistently. That I could read them otherwise suggests just how pleasantly off-balance Roaming Foliage threw me.

Kyle offers plenty of plot, too. In fact, Roaming Foliage wisely offsets its relative chaos with a fairly straight-forward narrative structure. The characters quickly divide into pairs, with the opening character leading another to the tailor who made his suit in the hopes that the tailor will make another (and here I admit that my use of gender designations is visually ungrounded, but this is already too confusing for the singular “they”). The tailor is named Rotodraw and is either an ancient robot built by extinct humans or the last human who has come to believe he’s a robot. Either way, he (“he”?) needs a special fungus to refuel—and so begins the quest. 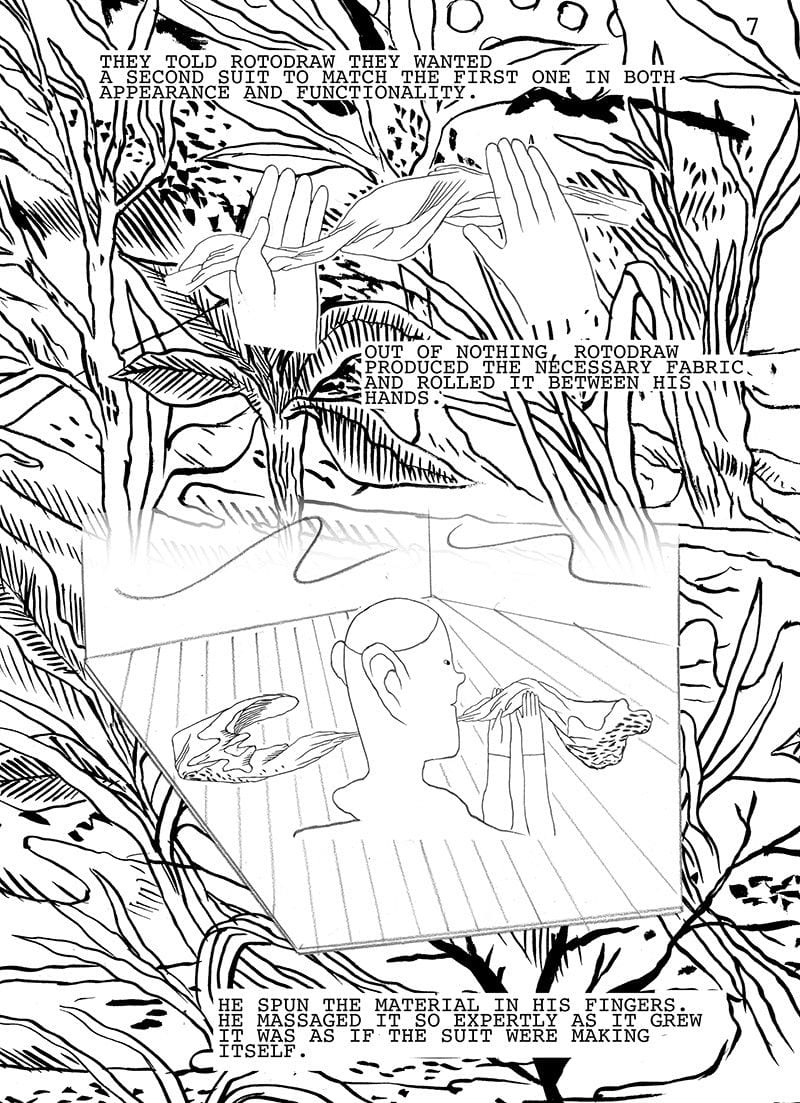 Rotodraw also turns Roaming Foliage into metafiction, with not just his ability create objects “out of nothing” (the power of any artist), but the foliage of the garden becomes animated when Rotodraw is having a dream—meaning the unstable fabric of the story world is linked to Rotodraw’s mind. That reality is also shaped by the characters who interact with the ever-changing face of the wishing well—and the reader too, since we’re instructed to write a description of the face on the lines provided inside the book (so it really is like a puzzle book). Other pages include things that aren’t there (such as items that the characters are not carrying) and events that don’t happen (it was only an “anxiety dream” when she threw her friend’s bodiless head into the well).

As the unnamed characters’ adventures continue, there’s a secret password, wild dogs, a gate twice left open, an elf giant, a magic monolith, invasive tobacco plants, a dog-shaped fungus, a ladder, a tunnel, an image-projecting telephone, a mysterious hallway and, like any quest narrative, a return home. In other hands, this would all be merely an entertaining odd fantasy tale. While it is still that, Kyle’s meta-garden also draws attention to the underlying structures of the comics form, giving them new sustenance to grow previously undreamed possibilities. I hope Rotodraw never wakes up. 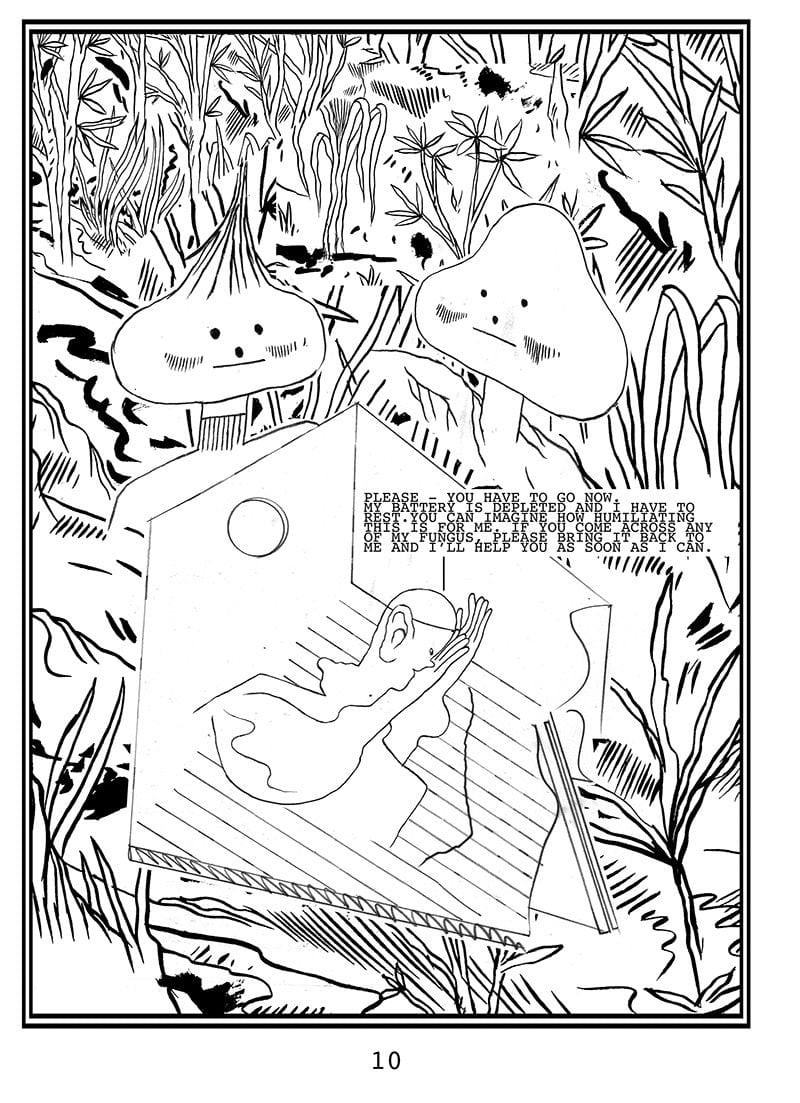