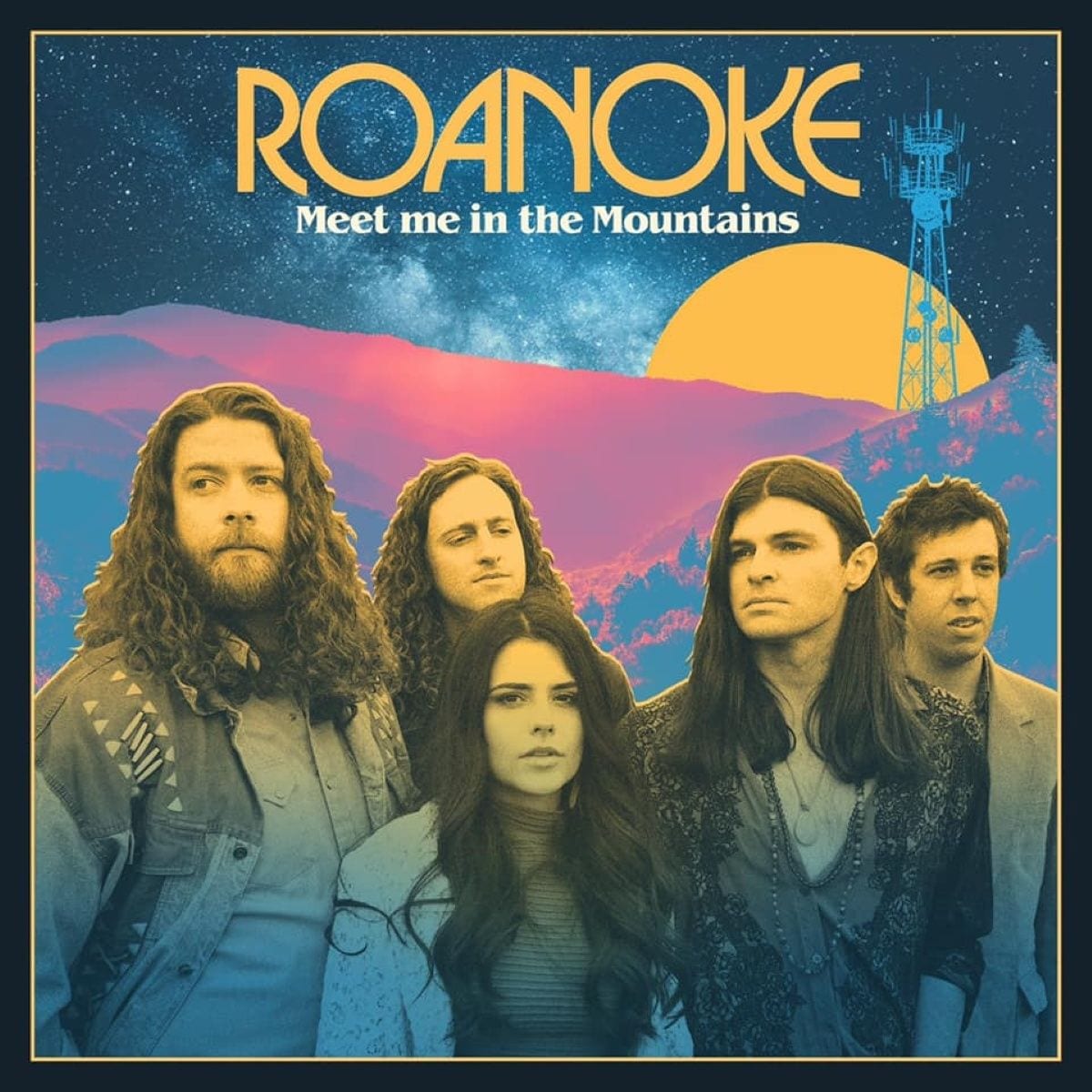 "Meet Me in the Mountains"
Roanoke

Two of the founding members of Nashville-based roots-rock band Roanoke aren’t going to let the coronavirus get them down in 2020. Lead singer Taylor Dupuis and lead guitarist-vocalist Joey Beesley, who share a professional and personal relationship, are hitting the road, and want you to come along (virtually, at least).

Their desire to find themselves is illustrated in the music video for “Meet Me in the Mountains” that premieres today (August 27) at PopMatters. The song Dupuis wrote in about an hour during a band writers retreat in the mountains is the first of two singles they are releasing as Roanoke experiences a transformation during this unforgettably dismal year of the pandemic.

“The narrative of the video is quite true to the story of the song,” Dupuis offers in an email interview for this article. “The song [that dropped on 21 August] is about a man in a loving relationship who can’t keep his head out of the clouds. He’s always wanting something more, and to escape. So he decides to run away to the mountains with nothing. He soon starts to become lonely and dreams of his former life.”

Beesley plays the escape artist and Dupuis, who has professional acting experience (look for her upcoming film role in Lost Heart shot in July 2019) is his partner “desperately looking for him,” she adds. “Our slogan on the road is ‘Where’s Joey?’ because he is always disappearing, so it ties in nicely to real life as well.”

Describing the video as ” The Goonies meets mystical ’80s rock narrative” that Dupuis developed with former Roanoke drummer Kyle Breese, the band watched the 1985 film and 1986’s Stand by Me for inspiration during long road trips. “I was really excited about the mystical ’80s rock aspect,” Dupuis contends. “When I write, I oftentimes see images and colors. For this song, it was greens and blues, and I brought up the idea for the performance aspect of the video. I wanted it to look like a classic ’80s music video. Blue and smoky and mystical.”

Dupuis’ friend and stylist Courtney Geree carried through the ’80s look for the video that was shot and edited by Nashville director-photographer Josh Kranich over about two and a half days last summer, with outdoor locations he scouted such as in Ashland City, Tennessee. The performance segments took place in a Nashville studio, and a glimpse of the Roanoke couple’s previous East Nashville home can be seen during the intro. “The bike-riding scenes were a little tricky,” Dupuis maintains. “Joey drove our van while Josh hung out in the back to film us,” with everyone else trying to avoid the traffic.

Both from Michigan, Dupuis and Kranich bonded while chatting about video concepts and discovering they were on the same film set years ago in their home state. She feels that “he was collaborative and really captured our vision and band vibe. … It’s sort of funny, we always seem to be on the same creative wavelength. “I will tell him a messy unorganized idea, and he will come back with some image or video and be like, ‘Sort of like this?’ And I’m like, ‘YES! Exactly like that!’ Even down to the style of filming and editing.”

Check out “Meet Me in the Mountains” now, then read on to learn about Roanoke’s future plans, Dupuis’ solo music and acting projects and her upcoming road trip with Beesley that they hope will draw a livestreaming crowd. While the pandemic has shut down Roanoke’s touring plans for the unforeseeable future like most other performers, it isn’t stopping the German-born Dupuis and ex-Floridian Beesley from making a few moves this year.

The most significant change is the configuration of the band, which formed in 2014 as a sextet and until recently also included Breese, Zach Nowak (mandolin, vocals, guitar) and John Fiorentino (guitar). I first introduced them at the Huffington Post for the May release of their self-titled, full-length album debut in 2016, then wrote about Roanoke at PopMatters in 2018 for their music video premiere of a song ironically titled “Don’t Let Me Leave the Road” (from the Where I Roam EP).

“Roanoke will be moving forward with the full band sound, bringing on players to record as needed and when touring starts back up, but branding moving forward will focus on Joey and myself,” Dupuis reveals. “We all decided to part ways about a month ago. Just moving different directions in life and music. We are still good friends and hope the best for each other on everyone’s musical journey.”

Also, Dupuis and Beesley recently said goodbye to “our beloved East Nashville home” and found a place built in 1929 that’s outside Goodlettsville, a small town about 15 miles north of the Music City. “It was a tough move, we built a lot of memories in that house, but we were all ready for a change,” Dupuis admits. “We love our new house. … It’s become such a peaceful safe space for us.”

The quiet life provides welcome relief for a couple that relies on constant touring to make a living, though they’re ready to travel again after quarantining together (without TV or internet) for months before hosting a few friends outdoors during some “socially distanced hangouts” at their place.

“We really miss playing live shows,” Dupuis states. “We’ve always been a busy band. … It was always nice to be able to balance business and live shows, but with the lack of shows, the business side of things has completely taken over, which can be draining. Before we would work really hard promoting shows, posting on socials, creating content, etc., and the payoff would be the live show. Now we are trying to find ways to keep the creativity flowing.

“I love to travel. I was always happiest when I was on the road meeting new people, hanging with my best friends and making music. It’s been quite an adjustment trying to reach folks via a screen. I miss that kinetic energy I used to get onstage.”

Who knows when Roanoke will get to experience that full-fledged feeling again, but Dupuis and Beesley will commemorate their 30th birthdays (and the release of their next single) by taking a road trip from 22 September to 8 October with a planned stop in Colorado. Talk about the perfect time for a peak performance.

Regarding the second single “Dancing in the Night”, the “super-fun upbeat song” she also wrote on a retreat that will be released on 18 September, Dupuis says, “Many of my songs come from a deep dark place, but I wanted to write something lighthearted. It’s about falling for someone you just met in the midst of chaos and under the moon. It has really great three-part harmony, and Joey’s guitar part is so memorable and catchy. Almost a surf rock vibe.”

While “inviting folks to come along with us,” an excited Dupuis exclaims, “We are teaming up with Jam in the Van, and will be live streaming the whole thing. Not just us playing music, but also getting tattoos, sleeping in the van, exploring, etc. We can’t tour right now, but we wanted to find a new way to connect with people and be on the road. We will also be recording an acoustic EP on the way! And anyone who takes this virtual trip with us will get it for free.”

As they forge ahead with that, the Roanoke pair are veering down another path with their sound while Dupuis also works on a “pivotal” solo project called Lovetta (“which means youthful wolf in French,” she points out while seeking to bring “an indie/rock witchy vibe” to the songs). “I have always felt a strong connection to wolves,” Dupuis asserts. “I was an odd child. I had a wolf bedroom and was always reading and writing about them. This project has been about connecting to my childhood. … I thought [Lovetta] was a beautiful, fitting name.”

Shadow Self, a five-track EP recorded at Creative Workshop in Nashville by Parker Cason, son of studio founder Buzz Cason, and produced by Skylar Wilson (Lindi Ortega, Andrew Combs, the late Justin Townes Earle), will be released on October 30. That’s more than a month after Beesley turns 30 (on 23 September) and the day before Dupuis plans to enjoy two more special occasions with a full moon ritual and scary movies on Halloween. But she’ll likely howl the most over her new record.

Named Shadow Self for “the part of myself that Lovetta helped me work through,” Dupuis is making her solo debut after “I started to get lost in the band dynamic, which led me to feel out of touch with myself and my femininity. This project really helped me to find my voice, and feel comfortable with who I have always been but strayed away from. I’ve done a lot of healing over the past couple years, and that’s what a lot of the songs are about.” Album contributors joining the sonic songbird (and her pretty pipes) include Wilson (keys), Nick Wells (bass), Jon Radford (drums), John McNally (acoustic, electric and pedal steel guitars) and Erin Rae (backup vocals).

The first Lovetta single — “Shake the Trees” — will be out on 4 September, and though her haunting cover of “Blue Bayou” recorded at Dupuis’ home during quarantine isn’t on the EP, the Linda Ronstadt fan released a YouTube video in May. Putting “my second favorite passion” — acting — on the back-burner for now while juggling her music projects, Dupuis says her most fulfilling role so far on screen is as Elsie in Lost Heart, in which she co-stars with Don Most (Happy Days‘ Ralph Malph) and Victoria Jackson, a cast member of Saturday Night Live from 1986-92.

Indicating that her character’s story in this fall’s release is “very similar to my own”, Dupuis (citing the late Robin Williams in Hook and Natalie Portman in Garden State as grand performances she loves) adds, “A small-town Michigan girl wanting to leave behind her life to pursue her dreams. I got to film in my home state, see my family and play Roanoke shows between shooting days. So it was really a dream. Lost Heart also features some Roanoke tunes. They fit the vibe of the film quite nicely.”

As for the streamlined Roanoke, they “will always be at the top of my priority list,” assures Dupuis. “It has the most momentum, and I am very excited about the direction we are heading.” But while still loving folk tunes, “I felt myself wanting to portray a different type of entity onstage and off, and the music and songs just followed. Our taste in music evolved, and so did our songwriting. We have always been huge fans of the greats of the ’70s and early ’80s. Fleetwood Mac, the Eagles, Jefferson Airplane, Melanie, etc. And thought, ‘Why not draw inspiration from these legends, and add our own spin on it.’ …

“It’s been really interesting to see and watch ourselves grow as people and as musicians,” Dupuis reflects. “For me, it seems to fit the seasons of my life. … I hope our new sound takes us all over the world. Sharing these songs feels important, if only just for us.”

While trying to make ends meet with Roanoke, the coast looks clear for Dupuis and Beesley, no matter where they roam. Whether it’s spring, summer, winter or fall, they’re determined to go places.