The Lighthouse
Robert Eggers
A24

It feels fitting that Robert Eggers’ claustrophobic and sea-sprayed gothic masterpiece about two men losing their minds on a remote, storm-wracked island in the North Atlantic is hitting theaters now. This year has felt like the year when the species has finally begun to understand that we have changed the world beyond our ability to save ourselves, and that a certain vengeance is coming.

That does not mean The Lighthouse needs to, or even should be, seen as an allegory. So tightly is the movie’s 1890s setting woven through its fabric that when a near-to-cracking Ephraim (Robert Pattinson) bellows at Thomas (Willem Dafoe) that the older man is like a Herman Melville parody, the reference feels of-the-moment rather than dated. Nevertheless, the raging fury of nature in the movies feeds the sense that these men have done something to provoke it.

Ephraim plays a young “wickie” on his first four-week rotation at the lighthouse. A storm-battered white tower topped with a blinding light and barely hanging on to a pile of rocks somewhere far off the Northeast coast, it is frequently shot by Eggers from a distance, emphasizing its vulnerability. Ephraim looks even weaker, a slumped and cloudy mystery of a man who may as well have a sign on his back reading, “Running from Something. Liable to Snap if Provoked.” Dumped on the island at the movie’s start with a few crates of supplies and a seemingly inexhaustible supply of tobacco and barely repressed furies, Ephraim sets about his duties with all the cheer of a condemned man.

Pushing Ephraim further to the brink is Thomas. A one-legged “old tar” with a somewhat impenetrable piratical accent verges on the self-parodic. He blathers like a man who has spent a fair bit of time amusing himself. Earthy, booming, and Biblical, Thomas keeps after Ephraim to carry out his duties during the day and urges him to drink up and tell his own tall tales to get them through the long and stormy nights. His Melville- and Robert Louis Stevenson-inspired dialogue cycles from gloriously orotund Neptune-invoking expostulations on the mythic glories and fearsome terrors of the ocean to the barked orders of a crusty old captain: “Get back to yer duties or I’ll give yee a keelhauling!” 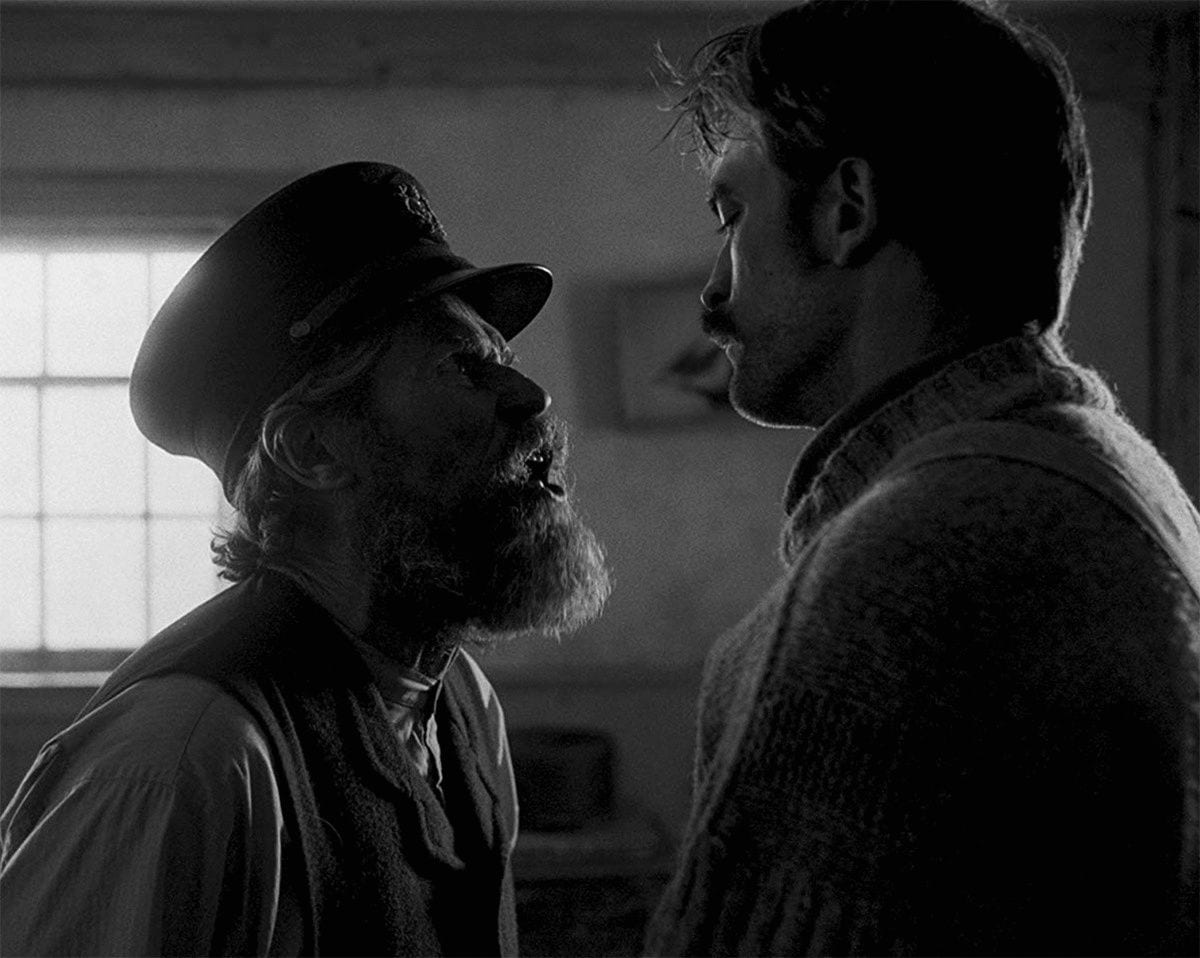 For a good stretch, that is just about all The Lighthouse is. Just two men, shot in that old square ratio of the early sound era, which evokes an earlier time but more importantly emphasizes the claustrophobia of their location. They jaw and bark at each other in the rich darkness of Jarin Blaschke’s grainy and lustrous black-and-white cinematography. This works better than one might imagine, and due not just to Pattinson and Dafoe’s commitment to stripping their characters down to bone and sinew and fear.

Dafoe’s performance is particularly explosive, drawing on that same Klaus Kinski-esque scenery-chewing magnetism he used for E. Elias Merhige’s Shadow of the Vampire (2000), and further fueled by the frequently and purposefully overripe dialogue. Eggers proves surprisingly adept at punctuating the carefully crafted light show and soundscape of the movie’s melancholy and terror-shrouded setting with neatly delivered jabs of physical humor.

Most of these gags, though, are at Ephraim’s expense. Dour as he scrubs floors and shovels coal, he turns resentful watching Thomas ascend to the locked top of the lighthouse (“the light is mine!”) and plots revenge on the sea gulls that peck and jeer at him as he labors on the tiny island’s water-sprayed rocks. Eggers pares back the plot to a clockwork routine of work, more work, and the never-ending rain that the descent of Ephraim’s sanity in effect becomes the story.

Indeed, the line between reality and fantasy blurs quickly once the supply boat leaves the men at the start of the movie. From then on, it’s a game of endurance, as the lighthouse’s booming foghorn blasts in the background like a metronome. As a nor’easter blows up and supplies run low, Thomas’s warnings about fearing the sea and it being bad luck to kill a gull begin to feel more prescient than the ramblings of a man with too much saltwater in his veins. 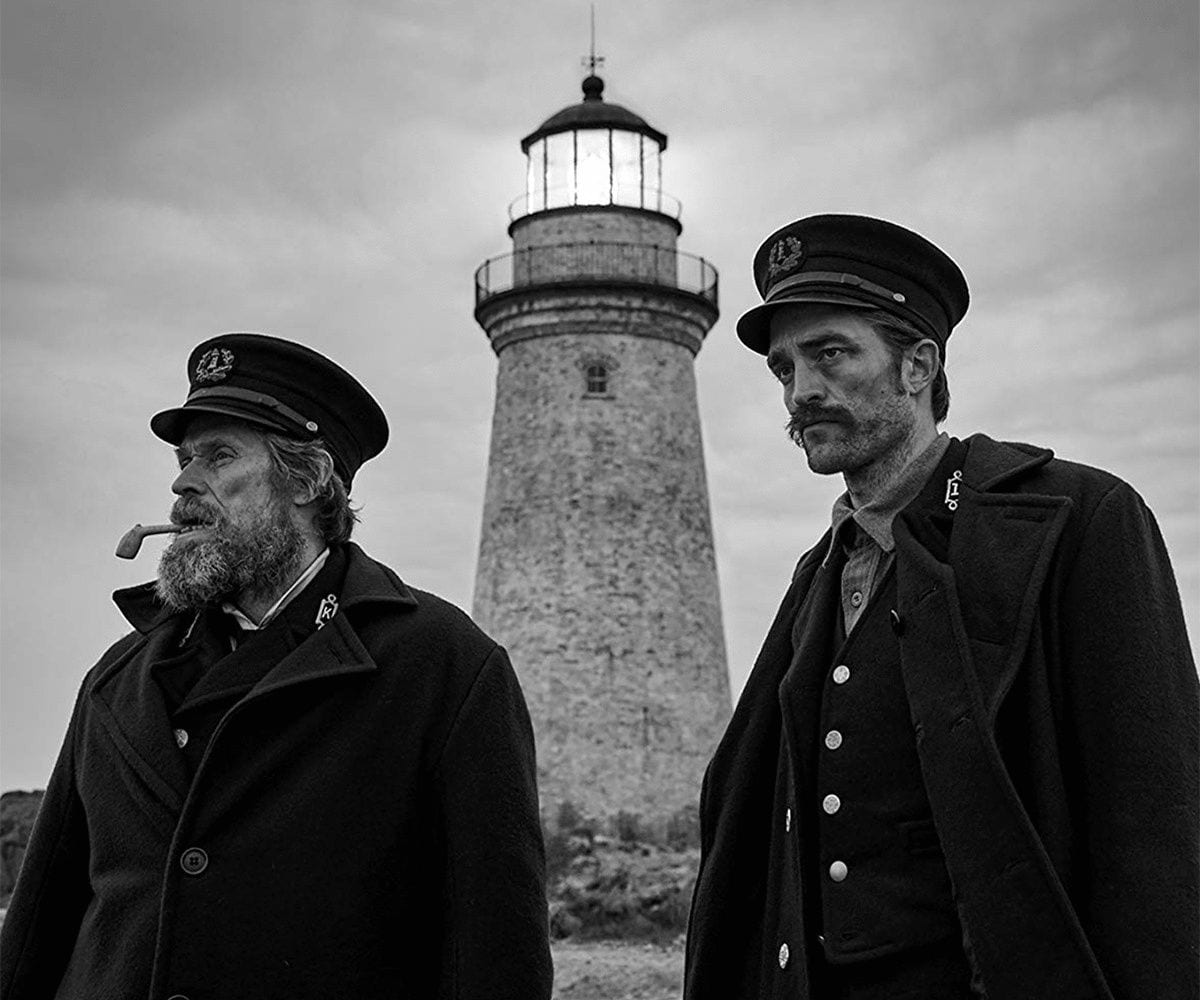 Eggers’ masterful 2015 movie, The Witch, was just as deeply embedded as The Lighthouse in geographically-specific folklore and spirituality. For that story, he essentially took many of the more preposterous claims of the Salem witch trials and imagined if they had been true. This time out, he plays it less straight. The frights of The Lighthouse are at first more environmental, once it sinks in just how isolated the men are and how doomed they might be if the resupply boat is delayed.

But as the movie starts to spiral in the second half toward actual rather than implied violence, the flights into more nightmarish imagery proliferate. From the unearthly screeching of the mermaid who might be a figment of Ephraim’s dreams to the tentacled something that appears to be keeping Thomas company up in his aerie, one cannot be certain of what is real, and what is not.

The Lighthouse is in some ways less impressive than The Witch, whose deeply researched setting felt more grounded and so became more unsettling once it pivoted into the otherworldly. But The Lighthouse aims for a different kind of experience, shot through as it is with a more artificial showiness and reference-laden feel, that carries nearly as much impact.

There is a lot of David Lynch in the looming soundtrack and steam-powered proto-industrial feel of the scenes where Ephraim is tending the lighthouse machinery, not to mention a gruesomely queasy thread of body horror underlying the broadly apocalyptic atmosphere. The overall impact of The Lighthouse‘s immersive and punishing atmosphere is enough to leave you wondering whether the human world these men came from still exists on the other side of the impenetrable fog, or if it even deserves to.