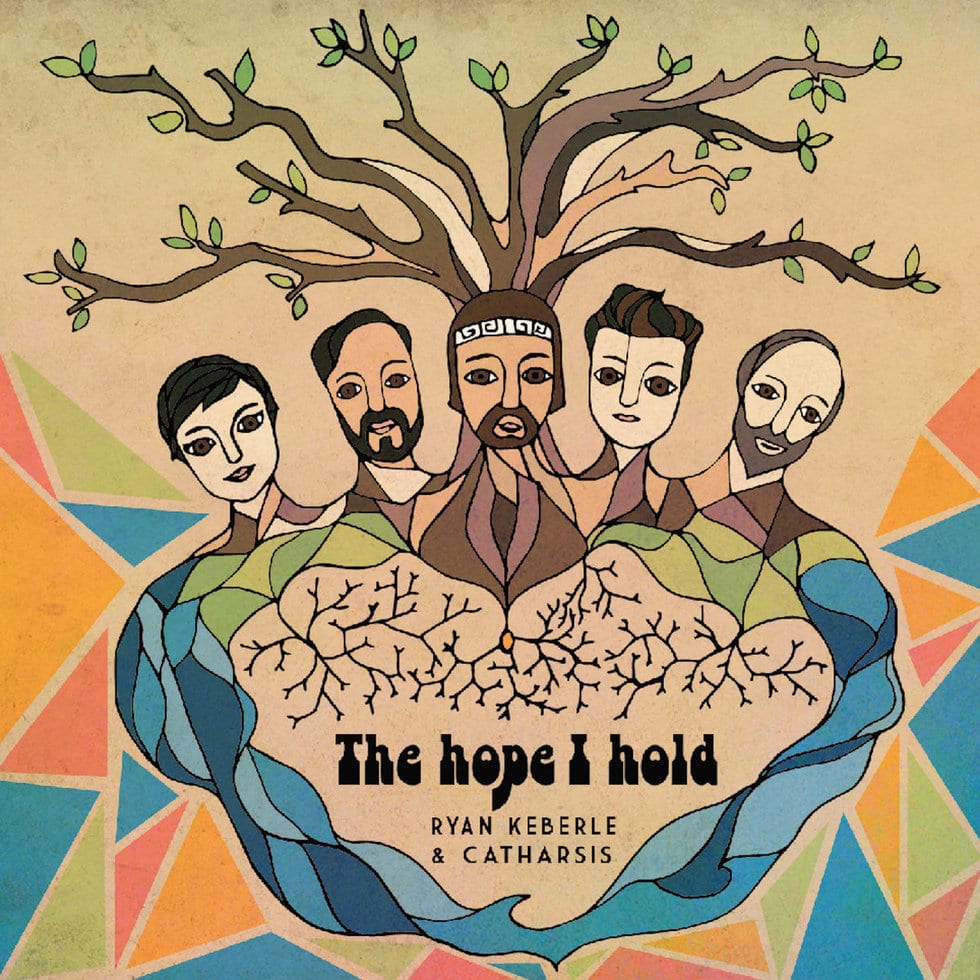 The Hope I Hold
Ryan Keberle and Catharsis
Greenleaf Music

Trombonist and composer Ryan Keberle is running one of the most hopeful and progressive bands in modern jazz, Catharsis. Initially, it was a quartet without a chording instrument that generated harmonies from the ingenious interplay of two brass instruments. With the addition of Camila Meza’s usually wordless voice, the band became more lush, with three lines in beautiful nexus. The last outing, the superb Find the Common, Shine the Light, included Meza’s electric guitar on several tracks, as well as Rhodes electric piano and Melodica from Keberle, making the band more orchestral.

The Hope I Hold further expands the colors that Keberle can use. Saxophonist Scott Robinson has taken the place of Mike Rodriguez’s trumpet, and his range of contrasting colors are just a small part of the change. Meza’s guitar is now integral to every composition, and Keberle makes extensive use of the Korg Minilogue analog synthesizer to fashion a wide palette of textures and pads that orchestrate his compositions. In addition, Catharsis now has a second singer—Keberle himself (who has a background in choral singing and arranging that hasn’t before been explicit to his creative music), adding his voice as yet another line and texture. Finally, the band is now using the studio more integrally in actually creating arrangements.

The result is a fifth Catharsis recording that makes the band sound utterly new and remarkably larger and more complex than before. Ironically, though, The Hope I Hold also reaches back to the band’s past, creating a sense of connection.

Like Find the Common, Shine the Light, this recording is explicitly political, mixing a sense of frustration and a real reach for change. “America Will Be” begins as a mournful anthem, with trombone, saxophone, and synthesizer mixing so regally and smoothly that they sound like a single voice. The rhythm section enters, suggesting perhaps a funeral march, and then Meza turns up her distortion to bring a sense of Hendrix-tinged blues to it all, with the horns then playing a free (and multi-part overdubbed) counterpoint. The song is anguished and beautiful at once, and then the voices enter in subtle layers, making it all that much more human. Meza sings a lyric full of hope (“Equality is in the air we breath”) and lament (“There’s never been equality for me or freedom in this homeland of the free”) and then something like hope (“We must take back America, America, yes I say it plain, America never was American to me, and yet I swear that America will be…”).

An accompanying piece, “Make America Again”, is a chorale for layered horns and voices that doesn’t use words but rises with gentle grace, ending in a long, swaying chord that might remind some listeners of the very end of the Beatles’ “A Day in the Life”. Somewhere in this creative response to the nation’s current political frame, the band is still looking to find the light.

The song from the last album that contained the lyric “find the common, shine the light”, then, is naturally reprised here. It is performed, however by a subset of Catharsis, a trio of Meza, Keberle, and bassist Jorge Roeder. Keberle has rethought the tune utterly, with his synthesizer snaking and shifting beneath Meza’s lyric and pulsing bass, then giving way to a fluttering guitar solo beneath which Keberle’s voice provides an eerie chorale. Meza’s song “Para Volar” (from her 2016 recording, Traces) is also reprised by the trio, with Keberle this time on trombone as the strings carry the rhythm. There are thrilling moments here where the human and brass voices sing in octaves that chill. Meza also sings in unison with her guitar at times. The trio seems intent on demonstrating that even 60% of Catharsis can work all the sounds a song might need.

More traditionally, Keberle plays a wonderful improvised solo on “Para Volar”, a lovely chunk of spontaneous melody. There are two more trio tracks, all sequenced together at the center of the album. They are highlights, particularly for Meza’s natural guitar style, which takes center stage on “Peering” and “Zamba de Lozano”. That latter tune also features three human voices in a genuinely thrilling harmonic blend. Keberle’s singing is better than you think it’s going to be, and Roeder gets in the act too.

The studio experimentation of the full band is on complete display with “Tangled In the Ancient Endless Chain”, particularly in an introduction that layers the band’s sounds before drummer Eric Doob kicks the composition into the most traditional “jazz” section on the recording. Robinson’s airy and swinging tenor saxophone plays obligato around Meza’s lyrics before taking off into a restless and positively Getz-ian solo. “Despite the Dream” builds slowly and also sounds like a lovingly orchestrated track. The lyrics suggest the voices of immigrants who built the country, with Keberle’s singing acting as a foil to Meza’s voice and bringing in lyrics from other songs (“Let America be America again“). Both Robinson and Keberle play with melodic invention here, riding over an insistent rhythmic momentum in the rhythm section.

Keberle’s voice takes the foreground on “Campinas”, though it is eventually joined by Meza and the leader’s own trombone in several overdubs and layers. When the surging drums and all these voices drop out at one point, we are left with the synthesizer and its eerie tones. This is one of the moments on The Hope I Hold where you might sense that Keberle is pushing the limits of the band—not its talent or invention but of what the band is best at, how this band best leverages its collection of sounds and voices. The track ends with a fluid guitar solo from Meza, never returning to its early themes. That’s cool, generally, as jazz hardly needs to stick to all its old structures, but there is something about this particular ending that seems casual and loose like the ideas ran out early.

Catharsis is a band that could move in any direction from here. Keberle loves tunes that come from Latin America, he has previously covered standards and rock songs, he is writing/arranging/recording with orchestral flair, and he is commenting on national affairs. The temptation is to say that The Hope I Hold tries to do too much at once. And some of the lyrics, while pointed and heartfelt, are stronger at advocacy than they are at artfulness. It certainly isn’t a critic’s job to point the way. I admire every piece of this band and every recording, and I find the combination of voices often daring and thrilling. With so much brilliance on the table (and, well, maybe some extra stuff that is thrilling or honest but not sublime), the challenge may now be to direct the music toward a more focused identity.

If anyone is up to that challenge, it is Ryan Keberle, whose music seems to grow each year in depth and daring.