Two things of note about Sachiko Kanenobu: She has an impossibly bright spirit and a personal story that is equal parts confounding and inspiring.

Considered Japan’s first female singer-songwriter, she recorded the album Misora, which was released in September 1972 in her native land. But by the time the record came onto the market, she’d already left for the United States. She’d fallen in love with American music writer Paul Williams (founder of Crawdaddy!, often seen as the first serious rock magazine) and moved with him to New York City, then Northern California.

Kanenobu’s life is marked by a series of intense friendships, many of them seeming to arrive by chance. Her relationship with writer Philip K. Dick is one of those. Williams conducted a major interview with the sci-fi author for Rolling Stone in 1974. Though they had previously known each other, by some accounts the occasion deepened their mutual admiration. But it wasn’t just a bond between two scribes.

Dick soon became enamored of Kanenobu’s music and, along with Williams, encouraged her to write again. They all remained close until Dick’s passing in 1982, though Kanenobu suggests that the venerated author remains a very real presence in her life today. (Williams, who passed in 2013, would become Dick’s literary executor.)

Kanenobu and Williams had two children together and eventually divorced. She made music with the band Culture Shock, which experienced some popularity in Germany and, every few years, Misora would make a new set of waves with artists such as Jim O’ Rourke and Devendra Banhart praising its elegance and simplicity.

Though recorded nearly half a century ago, the album sounds fiercely of the present. Imaginative, emotional and informed by a singular vision, Misora would not have been an easy album to follow in the immediate and, in many ways, it seems appropriate that it would take the LP time to find the right audience and for its creator to move toward the next step in her creative destiny.

In the last three years, there have been some unexpected events in Kanenobu’s life, which have led her back to live performance and gaining a new audience. 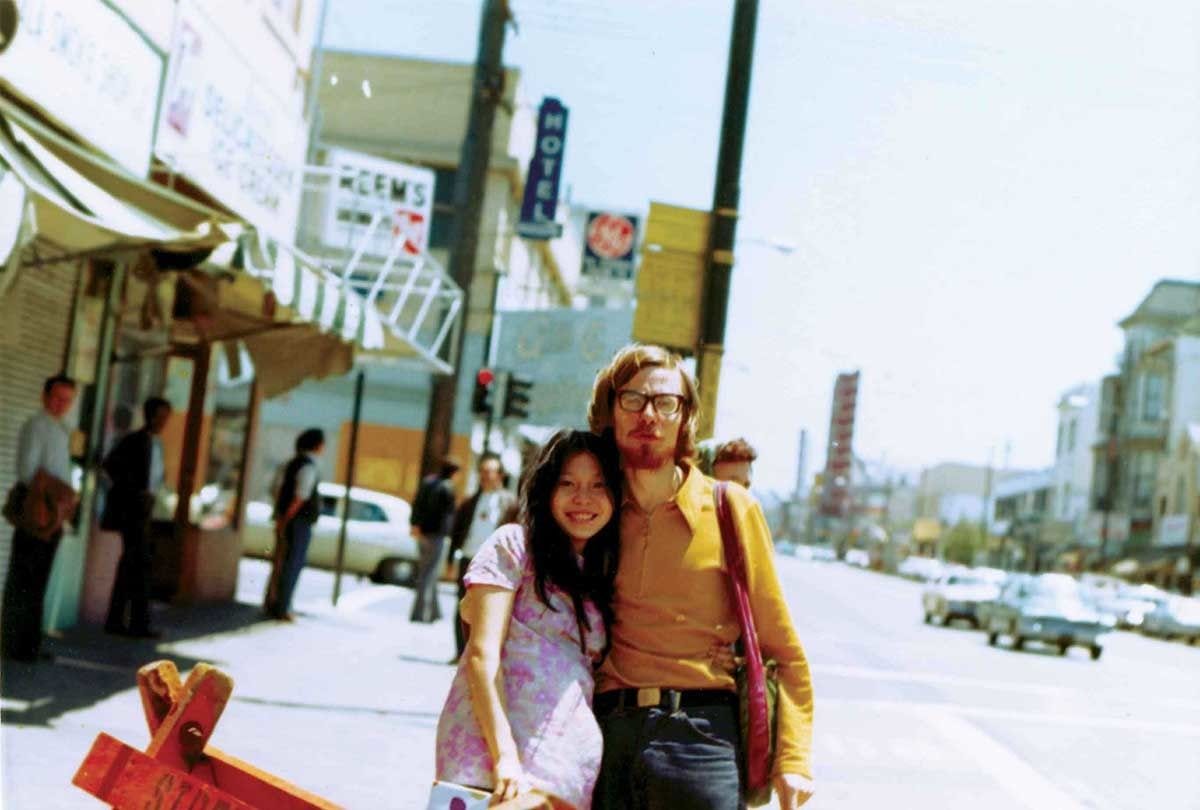 Two of her compositions, one written as a member of Gu, the other from Misora, featured on Light in the Attic’s Even a Tree Can Shed Tears: Japanese Folk & Rock 1969-1973. Mia Doi Todd recorded her version of “Anata Kara Toku e” on her 2016 effort Songbook. A further boost came via a 2019 profile in The New York Times Style Magazine alongside guitarist Steve Gunn.

Kanenobu speaks glowingly of her friendship with the fellow guitarist and, chatting via phone from her home in Northern California, is deeply optimistic about her future, musical and otherwise.

Misora arrives from Light in the Attic on 19 July, replete with detailed liner notes, translated lyrics and more.

It’s great to be speaking with you and a little bit of a surprise. It was just earlier this year that I read a piece in The New York Times Style Magazine about you and how Steve Gunn was celebrating your work. It seems like he’s been very encouraging.

He inspires me. It was a kind of cosmic meeting that we had.

It was through WMFU and Joe McGasko’s show Surface Noise. I did a live performance on the show in Spring 2018. Steve heard that and emailed Joe about how much he loved the performance. Joe sent that to me. I started looking for Steve. I saw his YouTube videos and loved them. The first time I heard Steve’s music, it was like a magnet.

I looked at his website and saw that he was playing in Sonoma and said, “My God, I have to go see this.”

My friend who played bass in my band a long time ago emailed to say that he was sorry that he’d missed my performance. I told him it was OK but that I wanted to go see this guitarist named Steve Gunn. He said, “Do you know he’s a friend of mine?”

We got connected and Steve invited me to see his performance in Sonoma. It was really wonderful. We hung out and the next day I watched his show and it just blew my mind. It was amazing. I loved it. Our friendship started from that, and then he asked me to open his show at HopMonk in Novato [in February 2019]. Steve kind of woke me up to start playing again. 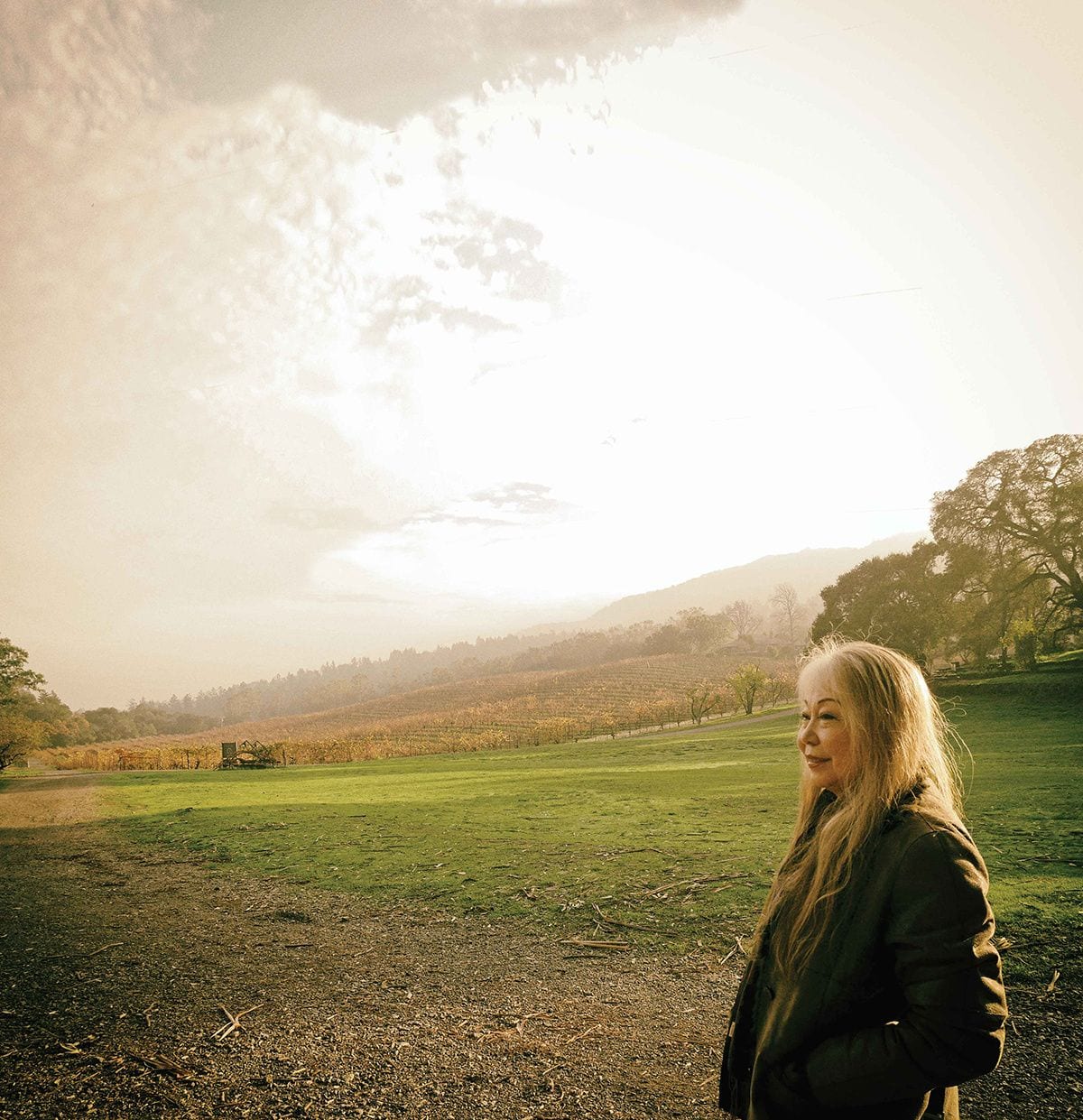 Every time I hear his music, I want to play. My body starts tingling. I feel a lot of respect and thanks for him.

Do you think you’ll find a way to work together in the studio?

We’re talking about it. He’s busy with touring though.

Misora has such an amazing life to it.

Yes. I think it’s a miracle! People just told each other about it. And, in Japan, about every 15 years young people discover it. It’s unbelievable. I’m so happy that Light in the Attic is reissuing it.

You are considered the first woman to play guitar and sing folk music in Japan.

It was a time of struggle but also a very exciting time.

Was there a generational clash or a clash about you being a woman?

Being a woman is always difficult.

It was still a man’s world in Japan. URC [Underground Record Club] focused on songs with a big message. Anti-war, social statements. But the music was mostly by men. Many of those people are friends of mine but I was there when it started. But women were pushed to the back. I waited and waited.

The band Happy End showed up and [offered] a different direction. They had some social statements. But they had a poetic way of writing that was never part of Japanese rock music before.

You left Japan before your record was released. What happened?

I met the writer Paul Williams who founded the magazine Crawdaddy. He was visiting Japan. Somehow we met and then fell in love. He really wanted to marry me. He wanted to be a father and I had his child. He had to go back to the United States and wanted me to go with him. I was carrying his baby and made the decision to go. 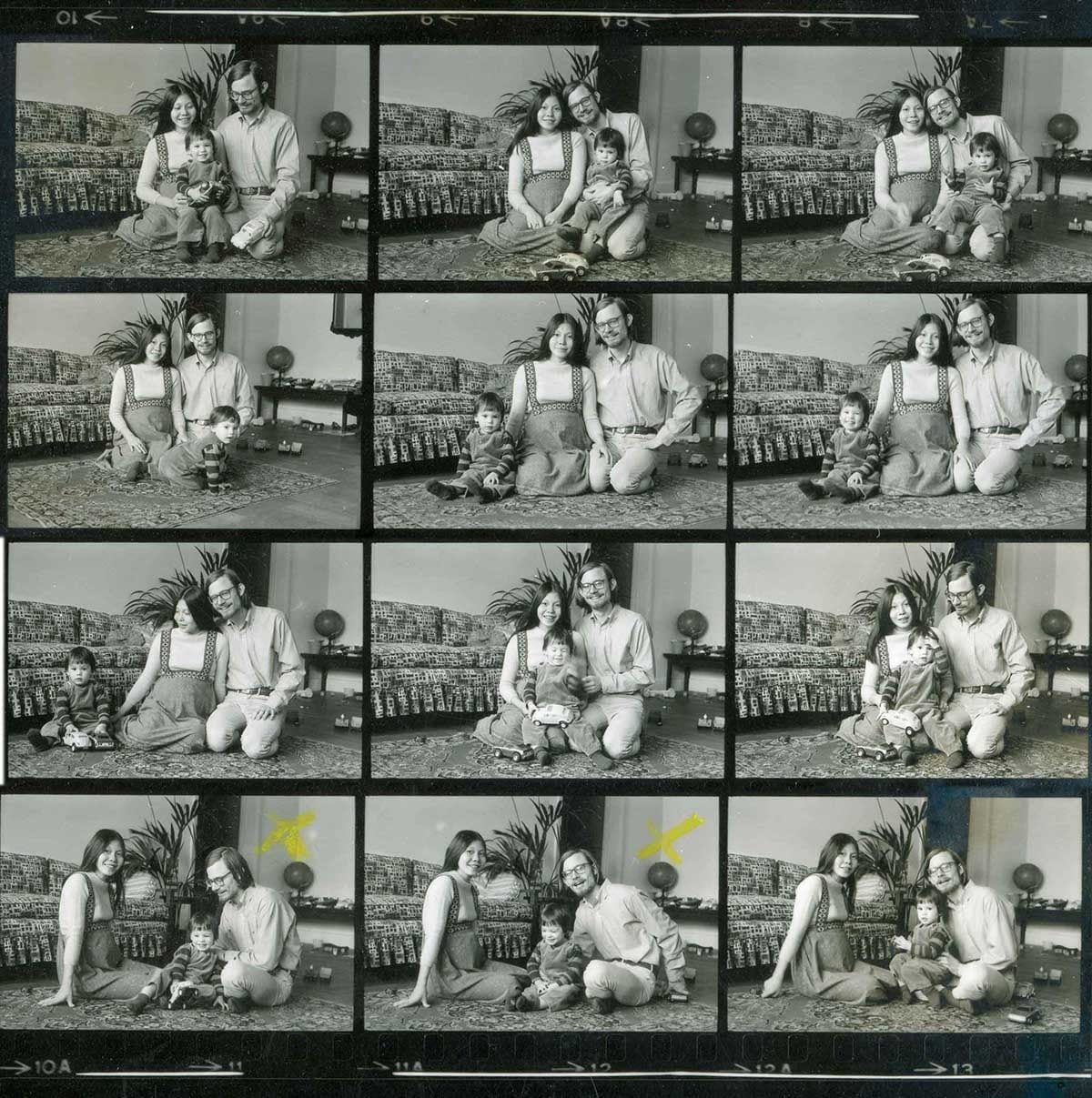 Did you ever feel sad about that?

I know it’s crazy! It was a little cuckoo! [Laughs.] Who would do that? I was dreaming about my album for a long time. It was pushed away for a long time by those great male folk singers. Then I got the chance to make my first album and I left. It sounds crazy, but I chose my baby.

How much did you think about music then?

It took almost ten years. Then I met Philip K. Dick. He really woke me up.

Philip K. Dick wanted to produce a record for you.

But he wasn’t a musician.

No, but early on he worked for a record store in Berkley.

Yes. And he loved music. He loved classical music. He liked the Beatles and the rock music of the ’60s. But he had this ambition to produce a woman vocalist. He had that for a long, long time. He loved Linda Ronstadt. He was crazy about her. But I was the one to have the opportunity to have him produce my record.

He came to see me one day because Paul told him that I was a singer-songwriter and had released an album. That was in ’76. Phil was interested in hearing my music. He came to visit me some months later and said, “Do you remember that I wanted to hear your music?” So I played Misora for him. He was really quiet. Then he said, “Are you still writing songs?”

I said I wasn’t because I was so busy with housework and everything else. He said, “You shouldn’t stop. You have a gift.” He encouraged me with his very intense eyes!

I told Paul later and he said, “Wow!” I asked him, if I wrote in English if he would correct it. But he didn’t want to fix everything. I spoke broken English, and he liked the way I said things. So, I started writing songs. That was around 1980. Phil produced a single for me in 1981. That was “Fork in the Road”. 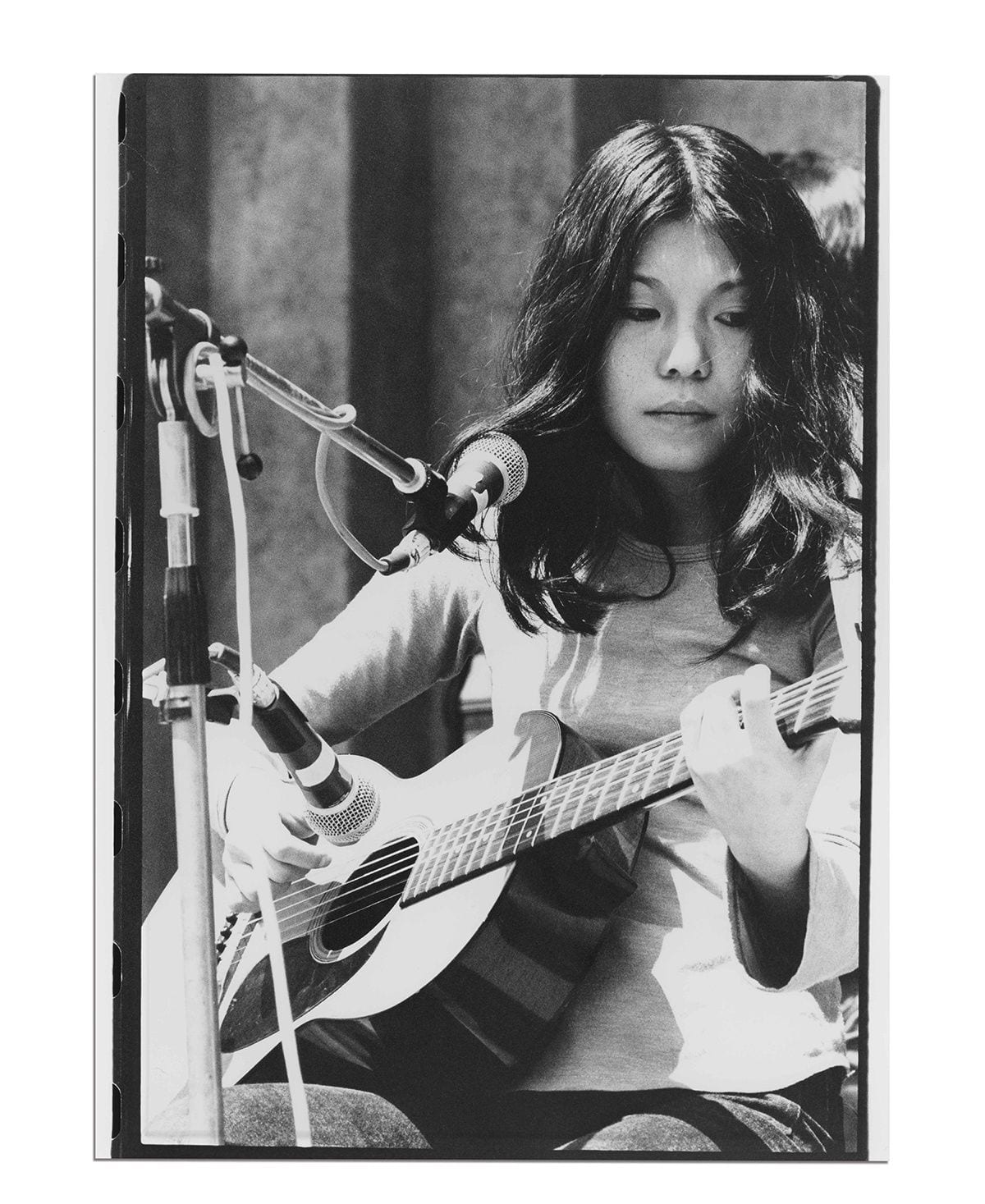 Later, I did a small concert in Sonoma. I had written a lot of songs. Phil told me he couldn’t come to the concert because he was busy writing. But he wanted me to make a cassette recording for him. We did and sent it to him. He loved it. Then he said, “Let’s talk about making an album.” That was in early ’82, and he died right around that time.

It is sad. But we had to get over this terrible sadness. This darkness. It was difficult for me and difficult for Paul. We loved Phil so much. He was like a big brother/father figure for us. Phil was a very good man. Maybe other people felt differently, but we thought he was very warm and kind. Very caring. I still respect him and his spirit is with me always. He continues to support me in a very mysterious way.

The songs that you wrote at that time, aside from that single, what became of that music?

Most of the songs were in English. I recorded some and put them on an album I recorded in the 1990s, and they were translated into Japanese. I have this very valuable, very special tape that, when Phil died, Paul got back. I hope that someday someone will release it, although if they don’t that’s OK too. It’s one of my great treasures.

When you write today, is it more in Japanese or English or is it in between?

It depends on the song. I was just talking to Steve Gunn, saying, “What should I do? Should I write in English?” He said, “It doesn’t matter!” I said, “OK! That makes it more difficult!” [Laughs.] So, I’ve tried to make one song with some English and some Japanese. I think maybe some will be like what I did on Misora.

I don’t speak Japanese, and it was great just to enjoy the songs and not think about meaning. Then I read the lyrics and thought, “Oh, yes. This is so beautiful!”

It’s very much in the Japanese style. I was so shy. I had a hard time saying things directly. I couldn’t say, “I love you,” “Hold me tight,” “Kiss me,” whatever. I really hid those feelings in the poetry of the words. I was a very quiet and humble girl then. Now I’m not quiet or humble!

A little bit humble, maybe! I’ve been speaking English for a while now, and my personality has changed a little. I like being able to be direct with what I’m saying. I can say what I feel. In Japan, being a woman, you kind of hide your feelings. But today young people in Japan are different than they were a long time ago. 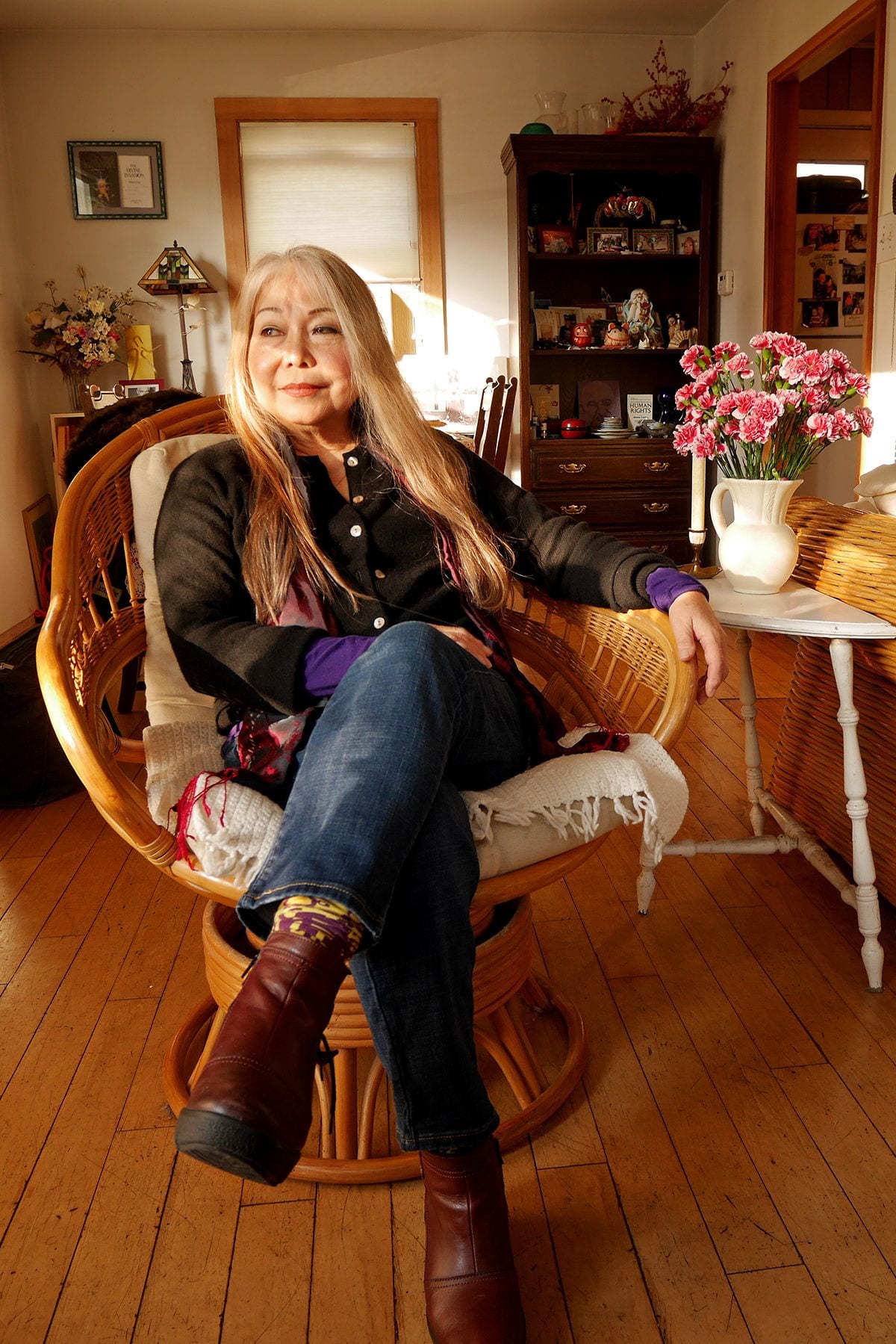 It’s 2019 and there’s renewed interest in your work. Your album is coming back out, you’ve been in The New York Times, you’re playing concerts with Steve Gunn. What does your family think of all of this?

I am a grandmother! My sons are OK! “Mom’s back to her crazy life!”

Both of my sons came to see me play with Steve Gunn in Novato. In San Francisco, my son and my grandson came. That was a big surprise. I was singing this song, “What Do You Really Want?” and I was screaming, “WHAT DO YOU REALLY WANT?” I think my grandson was shocked! But they loved it. They really, really loved it.

After 46 years I’m finally getting a chance to promote my first record, and I think they’re really happy with that.