For those who enjoy unrelenting tension in their cinema, Uncut Gems is an embarrassment of riches. Directors Benny and Josh Safdie are masters of chaos, throwing their overmatched characters into one life and death situation after another. We have no idea what awaits Howard Ratner (Adam Sandler), an unscrupulous jeweler with a nasty gambling habit, but we know it will be sleazy and exhilarating. Uncut Gems is a gritty thrill ride into the psyche of an adrenaline junky who won’t stop until he hits the jackpot… or the jackpot hits him.

The Safdie Brothers immediately knock us off balance by opening their Manhattan story in the unlikely location of the Ethiopian desert. Two impoverished Ethiopian miners dislodge a chunk of granite from the wall of a claustrophobic mine shaft. Their eyes widen as they spot several precious opals concealed within the ancient rock. The camera peers deeply into the opal, snaking through the distinctive pinfire patterns that make it so valuable. As we zoom through the microscopic chemical bonds, jagged edges yield to smooth flesh. We realize that we’re no longer inside the gem, but a human body.

The colon of Howard Ratner, to be exact, who lays helplessly on the examination table as a doctor describes every nuance of his colonoscopy. It’s a clever cinematic way of saying that Howard’s exhaustive search for the prize has effectively trapped him up his own ass. 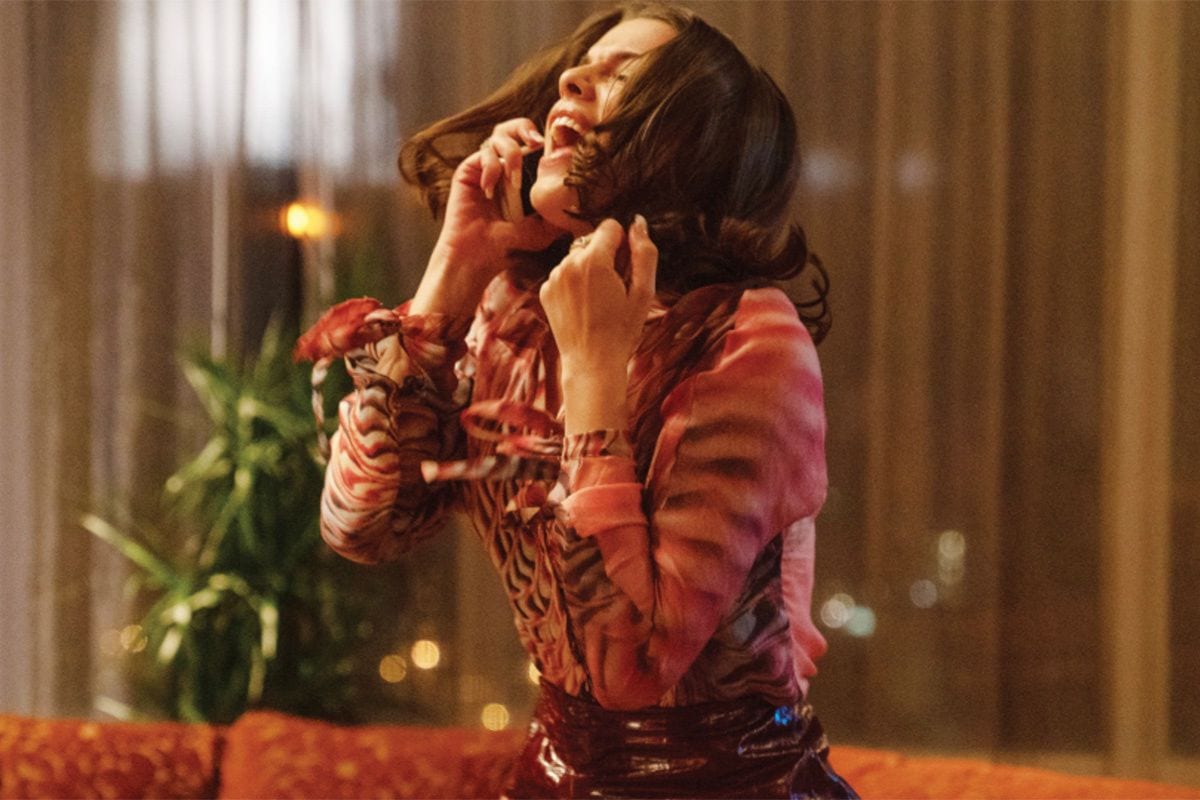 Two years after their excavation, the uncut African opals – stuffed inside the innards of a massive fish in order to evade detection – arrive at Howard’s bustling New York City jewelry store. This is his golden ticket; a million-dollar score to settle his gambling debts and guarantee a lifetime of luxury. He excitedly boasts his new treasure to visiting NBA superstar Kevin Garnett (played capably by Garnett himself), who promptly falls in love with its beguiling colors.

In the first of many poor decisions, Howard lets Garnett borrow the opals for good luck before his big playoff game that night. What follows is a cascade of insanity as Howard races to cash in the opals before violent collectors try to liquidate him.

The Safdies (Good Time, 2017) have never been afraid to embrace unlikeable characters, and Howard’s combustible mixture of self-loathing and egotism elevates him to almost Coen-esque levels of ugliness (see: the titular protagonist of Inside Llewyn Davis). He treats his wife (Idina Menzel) and three young children like afterthoughts, even ruining his daughter’s school play by getting stuffed (naked) into the trunk of his own car by an angry loan shark (Eric Bogosian). His sexy mistress/enabler, Julia (Julia Fox), is constantly belittled as “trash” until she’s needed for emotional support or to place exorbitant sports bets when Howard is indisposed. 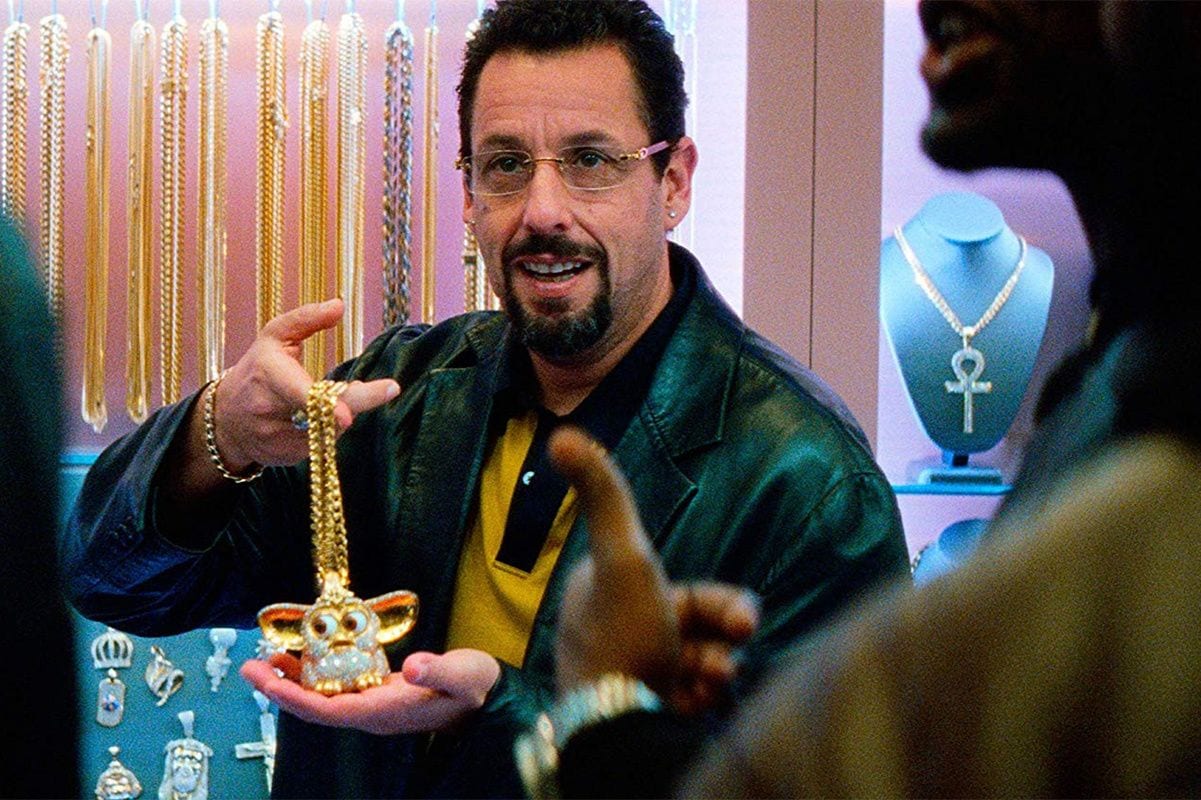 Between his reprehensible behavior and profanity-laced tirades (this film may set the record for most uses of the f-word), you’ll likely spend the first half of Uncut Gems struggling to care about Howard’s dilemma. Before the film concludes, however, you’ll be just as intoxicated by his self-destruction as the other poor bastards who inhabit his miserable existence.

Sandler’s career-defining performance enables the Safdie Brothers to drag us around the sleazy parts of town. A throbbing synth score and luscious neon smears help illuminate our journey into Hell. Cinematographer Darius Khondji’s intimate camera traces Howard’s sneering, horse-toothed face like a roadmap of desperation. Scenes degenerate into a cacophony of overlapping dialogue, further intensifying the uneasy sensation that something is about to explode. It’s like watching a Robert Altman picture while riding an out-of-control rollercoaster.

We’re also forced to confront some queasy moral conundrums. That fact that Howard is a practicing Jew creates a crippling spiritual schism between his beliefs and his lifestyle. More importantly, it fosters an unceasing need to prove himself. If he could only win that big bet, it might prove to his family that he was right all along, and every dollar loaned him was an investment, not a debt. It’s the kind of reassuring lie that only sounds ridiculous when the adrenaline has subsided.

Even edgier is Howard’s exploitation of African Americans. He capitalizes on the abject poverty of the Ethiopian miners by grossly underpaying for their priceless uncut opals. Worse still, his predominate business strategy at the jewelry store is swindling young Black men out of their disposable income. He patronizes them with ridiculous trinkets, like diamond-encrusted Furbies with googly eyes or Michael Jackson figurines mounted on golden crosses. He manipulates a Rolex counterfeiter (LaKeith Stanfield as ‘Demany’) into delivering clientele to his store, only to treat the young Black man like a distrusted employee in front of his friends.

And still we find ourselves hoping Howard will extricate himself from this spiderweb of debt and lies. The Safdies stoke our cravings for a Hollywood ending with fleeting glimpses of Howard’s humanity. When he begs Julia for help or hilariously laments her new tattoo (“Now we can’t be buried together!”), we see the quaking humanity try to overpower the degenerate gambler. It’s in Howard’s nature to implode, but we yearn for him to recognize the support system surrounding him.

Ultimately, Uncut Gems succeeds because it cleverly infects the audience with Howard’s addiction. The same adrenaline that pushes him to take each ill-advised gamble is the same adrenaline that compels us to keep watching. Each escalating complication draws us deeper into his madness and leaves us hoping against all logic that things will work out.

It’s the kind of movie that burrows deep into your brain and demands that you watch it again. Sure, you feel dirty after placing your bet, but it’s a small price to pay for such a wild ride.