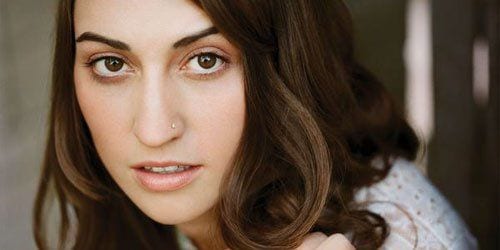 There’s more than a smidgen of visual irony adorning the cover of Sara Bareilles’ major label debut. With Bareilles’ face in soft focus, the image hones in on a small transistor radio she is holding in front of her mouth, inscribed with two labelmaker-made strips: “Little” and “Voice”. Will the tunes inside be whispered by a diminutive guitar-strumming waif and cradled in lo-fi production?

Nope, nothing could be further from the truth.

In fact, Little Voice is comprised of 12 huge-sounding, vibrant, neatly-crafted songs performed by a singer-songwriter-pianist with a powerful voice that is well-versed in soul, rock, jazz, and pop. At the summation of these 49 minutes, it seems impossible that Bareilles has not had formal training in voice or piano.

Opener “Love Song” belies its pedestrian title, and chimes out four minutes of pop bliss perfect for summertime airwaves. As “Vegas” vamps its sultry vibe, Bareilles uses her voice to an entirely different effect and lyrically ponders fortune-seeking for something “bigger and better”. Indeed, from these first eight minutes of the album, it’s evident that Bareilles’ songs did deserve something “bigger and better”: this big-studio treatment, with multi-tracked vocals and a full sound.

Bareilles’ 2003 debut Careful Confessions, which she co-produced, showed the promise of a versatile new voice with lyrical prowess. Based on the album’s strength, she toured with Maroon 5 and Ben Folds, and attracted the attention of both a diehard fanbase and Epic Records. Little Voice is the result of Epic’s interest, and it reworks six of these previously-released songs to give them, well, an epic treatment. Both albums are wholly comprised of Bareilles’ own songs, which are full of memorable lyrics and sneaky melodies effortlessly executed by her exceptional vocal range.

There is, for example, “Come Round Soon”, a nuanced yet damnably catchy slice of blue-eyed soul, and “Between the Lines”, a tune that readily blurs the genres of pop and slow-burn soul. The funkily dazzling “Many the Miles” builds to a sing-along finale that benefits from the harmony vocals of Bareilles’ bandmates Josh Day and Javier Dunn. “City”, and, to a lesser extent, “Gravity”, are more stripped-down piano confessionals. If pressed, I’d predict that the anthemic “Morningside” will be the next single. Finally, if the sound of record crackles accompanied “Love on the Rocks”, you’d swear it was pulled from a dusty R&B singles vault. Bareilles keeps the palette structurally and sonically engaging with songs that feature multiple guitars, Mellotron, cello, strings, and, of course, her own bright and prominently-placed piano and Rhodes.

“Bottle it Up” opens with line “there’ll be girls across the nation / that’ll eat this up”. As a statement about Little Voice, it’s certainly true. But the album, despite its lyrical topics of love, relationships, and insecurities, is much more than ready-made music for “girls”. It has universal appeal for any lover of quality music. This album has already rocketed to the top of iTunes, and while Bareilles might, at the moment, be a relatively “little voice” in the global music marketplace, Little Voice proves that she won’t be there for long…