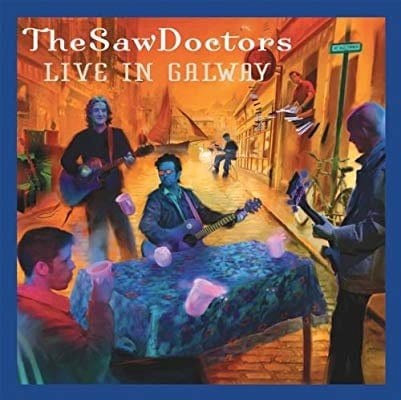 I hesitated before offering a live album as the essential, singular release of a band that’s not exactly a household name (unless you live in Ireland). In my experience, live albums aren’t always the most welcoming to new listeners. Recording quality and variations in lyrical understandability aside, concerts performed by bands whose members have great chemistry are often peppered with inside jokes for the fans, or moments of extended banter and improvisation between and within songs that might turn off unfamiliar listeners. But with the Saw Doctors‘ 2004 live album Live in Galway, I have to make an exception, because Live in Galway is the best, and most complete, encapsulation of what the Saw Doctors are about as a band. Buoyed by the audience’s clear enthusiasm and by lead singer Davy Carton’s pure charisma, the Saw Doctors bring their A-game, showing why they’re the most beloved and enduring Irish rock outfit not led by Bono.

It’s not for nothing that the Saw Doctors have been compared to Bruce Springsteen: their music covers many of the same kinds of themes as the Boss’, only relayed from thousands of miles away and interwoven with elements of Celtic music and folk rock. Their best songs brim with expressions of love, desire, frustration, desperation, nostalgia, tenderness, homesickness, and joy from a working-class perspective, rooted in their origins in the small town of Tuam in County Galway. The fondness they feel for their hometown, and for the Irish landscape as a whole, is wise, and often ambivalent, yet no less honest in its affection.

It’s this strongest material, plucked from among the five studio albums they had released at the time of Live in Galway and played with incredible vigor and lust for live, that make the Bruce Springsteen comparison incredibly apt. (There are even a few tracks where cars make a key appearance.) The melodies are simple, but incredibly infectious; the lyrics overflow with snapshot-like specificity. The delicate perfection of first love, as relayed in the ballad “Red Cortina”: “Close your eyes for just one moment / Disco at the start of summer / Sun still shining through the window / You were just about to blossom.” On the more prurient side, there are plenty of songs about sex, occasionally loaded with charming wryness about Catholic hypocrisy; notably, “Bless Me Father”, a cheeky rocker, takes the form of a confession, where the sacrament becomes a raunchy round of humble-bragging about a particularly enchanting woman with “big brown eyes” and “silky skin”. “Father, you have no idea what you’ve missed,” indeed.

There isn’t a bad song in this setlist, although “I Useta Lover” (from their 1991 debut If This Is Rock and Roll, I Want My Old Job Back), is probably included because it’s their biggest hit to this day. Live in Galway also provides much-welcomed rehabilitation for songs that came across as stilted on their respective studio releases, especially with the tracks they’ve selected from 1996’s Same Oul’ Town. It’s amazing what a key change and/or modulation in tempo, combined with the energy of the crowd feeding into the easy chemistry of the band, can do to give songs their full potential.

“To Win Just Once” is transformed from a ballad to a rousing, inspiring anthem about continuing to hope for just one thing to go right, even when you’ve been continually downtrodden. The Springsteen influence in particularly felt here; sonically, “To Win Just Once” would fit right in with the determined hope amidst the despair of the Boss’ 2002 album The Rising. Also from Same Oul’ Town, “Share the Darkness” is without question the sexiest, most sensual song the Saw Doctors have ever released. It simmers with warmth on Live in Galway, where in its studio recording it came across as slightly sterile. It begins with “Hey, I can’t say that I love you / I can’t say that I don’t,” flirting with a nonchalant offer for companionship before revealing its lonely, beating heart in a later verse: “When the world belongs to distant dogs / And the air is dark and still / And drunken conversations pass beneath the window sill / And there’s someone singing / Elvis songs as they make their way back home / And all your fears and worries / Attack when you’re alone.”

The Saw Doctors will never let you forget where they came from. As if calling their second album All the Way From Tuam (1992) wasn’t enough, Live in Galway provides a good swath of their Irish pride tracks. The opening song, “N17”, is literally titled after the former N17 road (now considered a motorway and called M17) and describes feelings of homesickness for Tuam, knowing with “a lump in my throat” “that things would be different / If I ever decide to go back.” (Wondering whether whether they’re going to change the name of the song for accuracy completely misses the point of the song, and of the Saw Doctors.)

Leo Moran, the lead guitarist and secondary vocalist in the band, entices you with his awkward charm to come out with him to “Clare Island”, to “take our clothes off in the moonlight / Skinny dip there hand in hand.” While Leo’s vocals aren’t as immediately clear and melodic as Davy’s (indeed, he sings fewer of their songs in general, and certainly far fewer on their most recent albums) they have their own endearing, open quality to them. “The Green and Red of Mayo” describes the beauty of County Mayo’s “soft and craggy bogland” and “tall majestic hills”, “where the ocean kisses Ireland / And the waves caress its shore”, uniting the band’s love for the landscape of Ireland with the colors of the County Mayo footballer jersey.

“Joyce Country Céili Band”, which sadly left the live rotation sometime after I started seeing them perform, is even more hyper-specific, allowing the Saw Doctors to take on the traditional role of a Céili band, which played for rural, working-class Irish audiences in social settings in the mid-20th century. A fun enough song in its studio version (1998’s Songs from Sun Street), it too benefits from the live experience, as being performed for a crowd allows it to really pay homage to the original form.

The most engaging parts of a live album—the parts that might turn off a newcomer—are those informal bits that inform the experience. There are things you can’t get on a studio recording, after all. The Saw Doctors have plenty to offer in this area. If you’ve been to one of their concerts, you’ll probably know the joke they make about someone who misheard the title of “To Win Just Once” and thought it was about “To Injured Swans”. While this bit doesn’t make it onto Live in Galway, once you’ve heard “to injured swans”, you can’t help but mishear the song proper every once in a while.

On the Live in Galway DVD (which you can find on YouTube here, as in nearly every live show, Leo expands “Galway and Mayo”, where he reminisces about family trips, adding a segue into “Maroon and White”, where he fantasizes about playing football for County Galway’s team. In yet another raunchy crowd pleaser, “That’s What She Said Last Night”, the guitar solo is replaced with the opening notes from Bruce Springsteen’s “Born to Run”, in a playful acknowledgment of their love for that musical icon.

“Exhilarating Sadness” and “Why Do I Always Want You”, both melancholy stunners on their original albums (All the Way from Tuam and If This is Rock and Roll, I Want My Old Job Back, respectively), burst with emotion even more in this context. The narrative lyrics of “Exhilarating Sadness” place you in the position of a girl living unfulfilled, locked in a position of waiting for life to begin: “You never heard the fanfare / Never saw the sunshine smiling / And the summer slipped in unnoticed / From beneath your tears.”

Davy’s voice on “Why Do I Always Want You” is plaintive, turning the simple lyrics into a burst of raw need and sheer hopeless want. Indeed, the only bad thing about falling in love with the Saw Doctors through Live in Galway, to my mind, is the fact that it really is the one place where you can hear most of their best material performed at its peak. The studio releases from the band are often cluttered with filler, especially Songs from Sun Street and Villains (2001), the latter of which is not even represented on Live in Galway. The band’s 2005 album The Cure is perhaps the strongest single studio album of theirs, but even its consistency pales in comparison to Live in Galway.

The Saw Doctors are the first band I remember seeing live that wasn’t a David Bowie cover artist. I’ll always remember going with my dad in October 2004 to the now-defunct Knitting Factory in Los Angeles, where the Saw Doctors used to play when they visited. We ran into Davy, Leo, and the rest of the guys in the band while crossing the street after grabbing a bite before the concert. I asked, shyly, if they would play “To Win Just Once”, because its rendition on Live in Galway had moved me so much. And they did. Davy Carton looked me in the eye afterward and presented me with the gray guitar pick he had used up to that point in the evening. I still have that guitar pick.