Portrait of a Lady on Fire
Céline Sciamma
mk2 Films

In 18th century France, a young woman, a painter, sees another young woman, an aristocrat soon to be married, when no one else does. “Seeing” in this case, in the film Portrait of a Lady on Fire, directed by Céline Sciamma, implies understanding and knowing. The film, convincingly, situates such feelings as the very basis for love. Unfortunately, as is so for many dramatic tales, this is an impossible love, powerful but forbidden.

Marianne (Noémie Merlant), the painter, arrives by boat to an island in Brittany in order to paint a portrait. Héloïse (Adèle Haenel), soon to be wed, refuses to sit for the portrait, so Heloise’s mother recruits Marianne as her daughter’s “walking partner”, telling Marianne to study her daughter’s image secretly. The portrait, once completed, will act as a marriage offering to Héloïse’s suitor, after which she’ll be shipped off to Milan for a new life of Italian aristocracy. (Héloïse’s sister, not long before the events of the film, killed herself to avoid the same fate.)

Obligingly, Marianne paints, eager to make money from her art. She enters the estate naïve but resolute, helping herself to food and wine and immediately setting off to her own quarters. She doesn’t appear particularly happy or sad, but her reticence is calm instead of combative.

The same can’t be said for Héloïse, whose blue-green eyes shine like a tiger’s, betraying anger and despair. It doesn’t take ten-minutes to gather the film’s thesis on 18th century womanhood. The other two women, Héloïse’s mother (Valeria Golino) and Sophie (Luàna Bajrami), the estate’s maid, are resigned to suffering in their own ways. The Countess, a hardened yet compassionate woman, is simply satisfying societal expectations by relinquishing her daughter. Sophie, for her part, is trapped in a cycle of servitude, fulfilling the tragic role of the underclass. 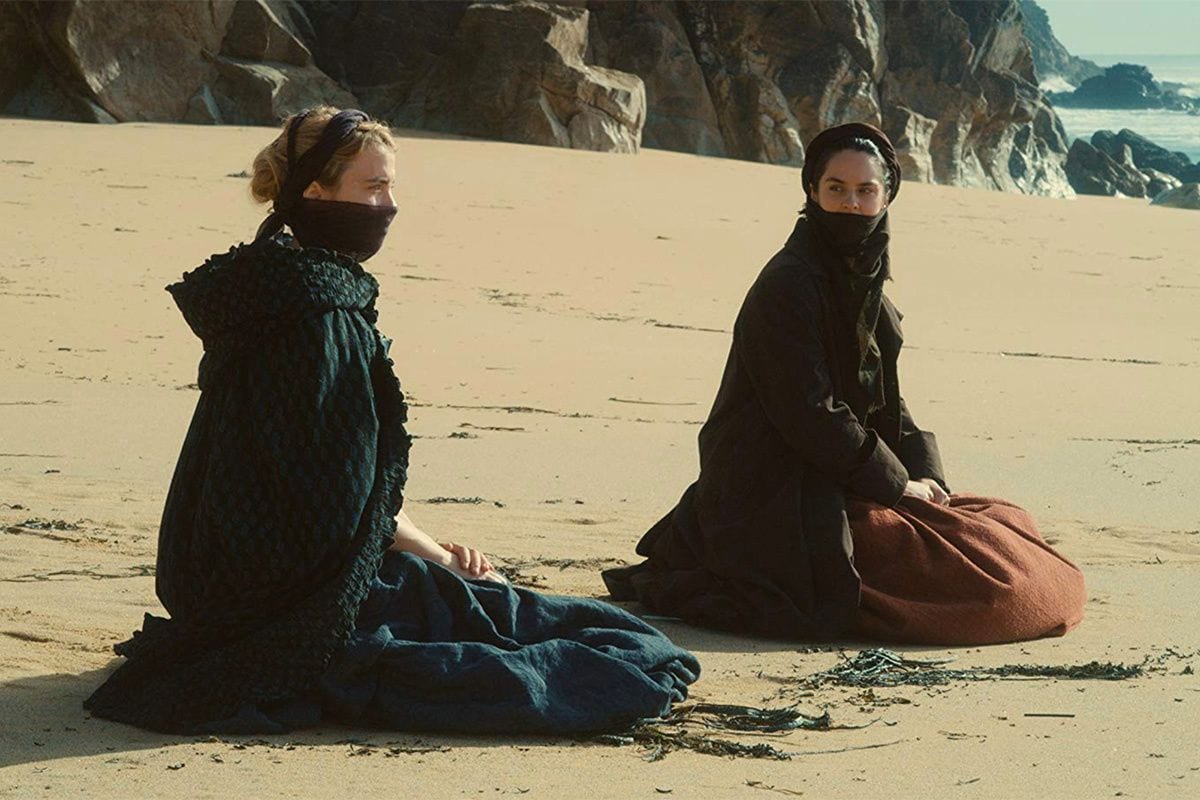 Adèle Haenel as Héloïse and Noémie Merlant as Marianne (IMDB)

This shared reticence dissolves slowly in layers — or, to use the appropriate metaphor, stroke by stroke. Process shots of Marianne’s work are frequent (the hands in these shots are Hélène Delmaire’s, who painted all of the works in the film), and they offer a glimpse into her inner psychology; the drawings and paintings are basic at first, but the final product is aglow with passion. The completed portrait, the titular work, shows a bonfire on a dark prairie, Héloïse slightly off to the side and her blue dress set aflame. It’s Marianne’s only frame of reference once the doomed romance is no longer.

This frame is ours as well. Portrait of a Lady on Fire‘s romance is told in flashback, and the beginning and end of the film are bookended by an older Marianne, who is shown teaching a class of young girls and lamenting her lost love. Whatever suspense there is in the film lies not in hope but in the terror of desire, especially a queer desire that has no hope for the real world. Unlike in Luca Guadagnino’s Call Me By Your Name (2017), another slow-burning, same-sex European romance, there’s no possibility for Marianne and Héloïse’s future. There’s either no love or no future.

Héloïse, choosing the path different from her sister’s, resists immediate escape in favor of a doomed love. Though her marriage is inevitable, with it comes the thrill of romance as her portrait is rendered. It bears resemblance to the myth of Orpheus and Eurydice, which, in fact, Marianne reads to Héloïse and Sophie one night while the Countess is away. They argue about the ending — why does Orpheus choose to look back even when he knows it will lead to his damnation? It’s beautiful, Marianne says. He couldn’t help himself; one more look was worth an eternity of fire.

Along with painting and literature is music, which foregrounds the film’s most fated event. At a gathering in a nearby village, a group of women sing “fugere non possum” (Latin for “we cannot escape”) around a fire in an elaborate choral chant. Marianne and Héloïse lock eyes, feeling the pained glory of the moment, and Héloïse’s dress catches fire. Although pre-kiss, the shared look is their first unambiguous shred of romantic passion, the bonfire expressing what their words can’t. The next day, they consummate their burgeoning love. 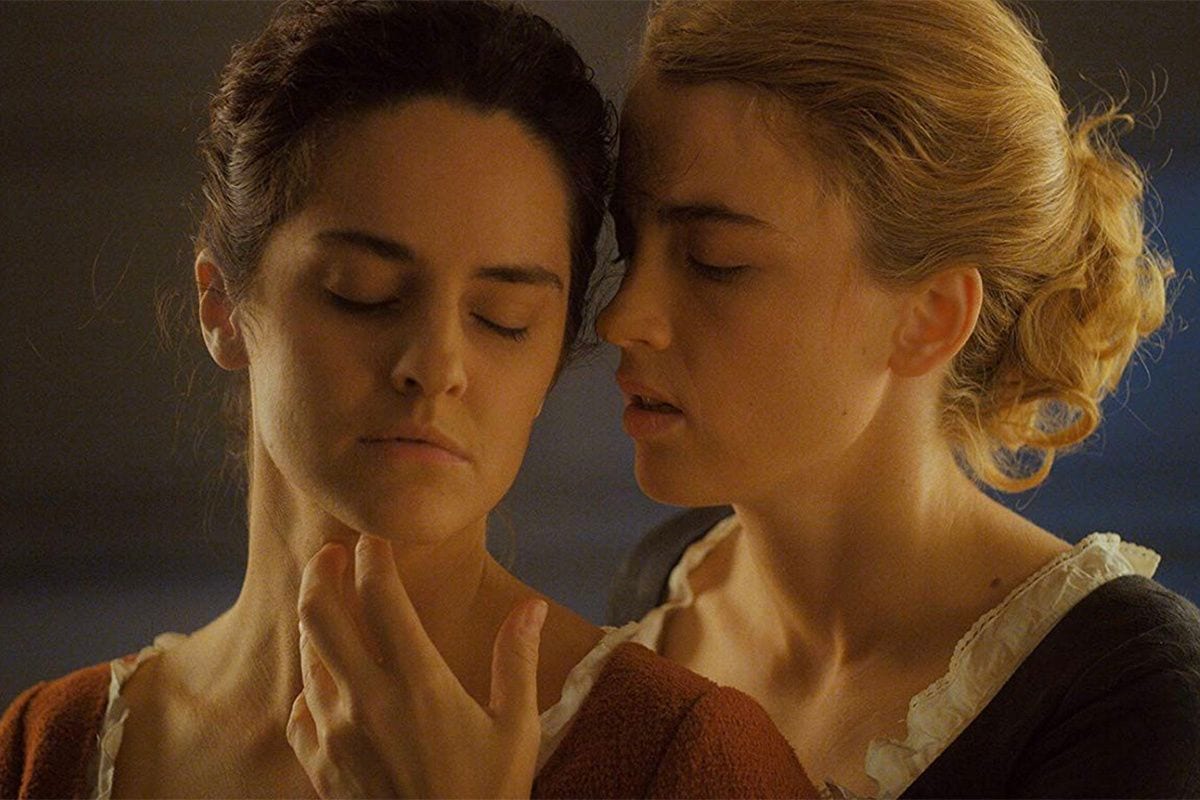 Is this what Susan Sontag meant when she called for an erotics of art? It’s difficult to look at Marianne’s finished portrait and not feel its poignance. Her previous efforts abided by the artistic and technical constraints of the time period, but the titular portrait approaches euphoria by forgoing traditional technique entirely.

As it goes, Marianne keeps the fire portrait for herself, offering one of the more traditional efforts to the Countess as Héloïse’s wedding gift. If Portrait of a Lady on Fire means to say anything about art in general, it’s that technical brilliance alone is not enough. The tragic passion of Marianne and Héloïse, of Orpheus and Eurydice, is its own form of poetry, born not from the well-worn techniques of a stifling world but from a secret moment of forbidden love.

Nonetheless, the film’s hopelessness — the inevitable heartbreak — emerges victorious in the end, necessary to its tragedy. There’s something laudable about Sciamma’s refusal to compromise, as though she’s saying, “This is the way the world was, is, and will remain to be for those society doesn’t prize.” All great tragedies say the same.