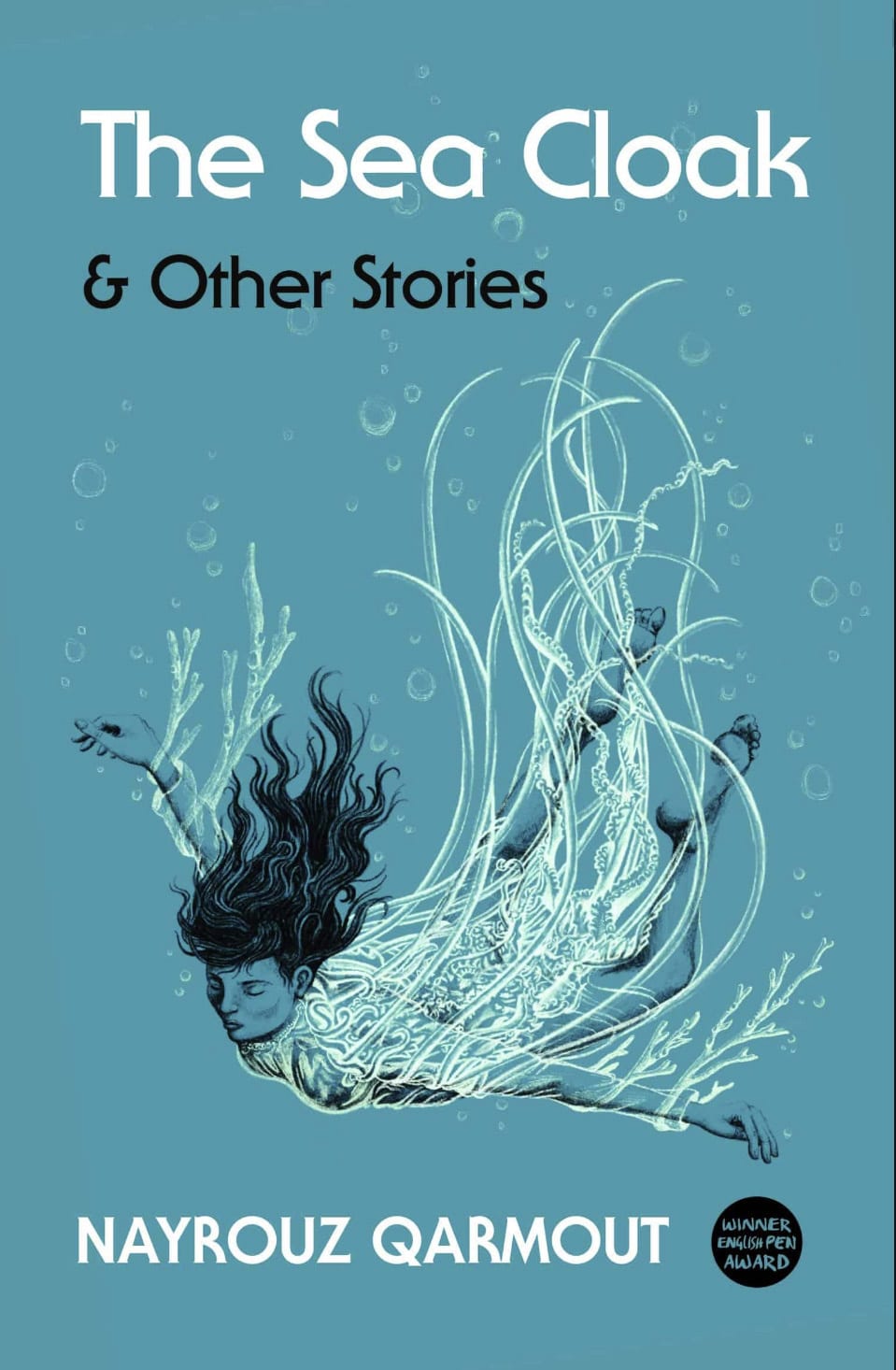 Palestinian author Nayrouz Qarmout’s debut English-language collection, The Sea Cloak and Other Stories (skillfully translated from the Arabic by Perween Richards), offers 11 short stories packed in just over 100 pages. But they are stories that linger, and envelop the reader with a prose power that their brevity belies. Qarmout’s superb storytelling focuses particularly on the experiences of women and children struggling to build lives for themselves in Gaza and Palestine more broadly, but she taps into a universality which renders these powerful stories compelling to readers of all backgrounds.

Indeed, the stories contained in The Sea Cloak have a preternatural beauty about them. The titular story, “The Sea Cloak”, is a prime example of the sort of descriptive power Qarmout brings to her work. It’s an exceedingly simple story: a young woman spends the day at Gaza’s beach with her family; she goes swimming, nearly drowns, and is rescued. What lends the story its power is the evocative lyricism of its telling.

Each vignette of Gaza and its beach assumes a gentle, intimate beauty, and as the pace increases when the protagonist wanders out into the water, so too does the descriptive power with which her thoughts and memories are depicted. Qarmout’s writing is like the sea itself, each paragraph and vignette enveloping the reader like the gentle swells of the ocean, growing more powerful with each ebb and flow.

As the protagonist drifts through her memories while buffeted in the unfamiliar waters, one catches a glimpse too of a young woman struggling not to drown amid the conflicting realities of her own upbringing – nascent romance, possessive family, patriarchal traditions. Yet it is the lyrical power of Qarmout’s writing that allows this disparate pastiche of memories to knit together so seamlessly.

The stories in The Sea Cloak are all dense with descriptive power and noteworthy also for the occasional, sparse yet rewarding glimpses they offer into their protagonists’ inner lives. In “The Long Braid”, a young schoolgirl courageously defies her misogynistic teacher, who disapproves of her love of song and dance. She loves the dance lessons which international volunteers offer refugee children, she loves singing patriotic Palestinian songs, and she defies the old men who try to deny her these things.

“Breastfeeding” packs a powerful punch into a few short pages, chronicling three generations of women: Yara, the young girl who dreams of escaping Gaza to a romantic life in Paris, even if she must contract to marry an old professor there in order to do so; her mother Sara, whose similar dreams of escaping to pursue further studies somewhere else – anywhere else – were thwarted when her parents married her to her cousin; and her mother, Yara’s grandmother, who would deny them all the joys and escapes they seek. Lurking in the background are the men who also bear the blame for rendering these women’s lives miserable. Yet in spite of it all, Sara and Yara cling to the hope that they will one day escape to a better life, or if not they, then their children.

In “The Mirror”, Leila and her young niece Dahlia sit on her grandmother’s bed and pretend to watch television. Without a television to watch they make up the stories they see on the screen. But the imagined quality of these images inadvertently trigger Leila’s traumatic memory of sexual assault. The story combines the sweet beauty of children’s imaginations with the dark malevolence of male violence. Qarmout pens stories that inscribe themselves deep in the reader’s heart.

Anyone who has travelled in the Middle East knows that it is a land where thousands of years of history are intertwined in the present, and in which centuries of architecture, landscape, and culture fuse together into an awkward yet seamless whole. “The Anklet of Maioumas” plays with this theme, threading together the lives of young women across centuries, and their parallel desires in all those times and places – for love, for freedom, for escape. The storytelling here drifts into the surreal at points, but the juxtaposition across time and place is ultimately a rewarding one.

Qarmout does not shy away from rendering her stories political, yet manages to do so with remarkable skill. The stories are neither preachy nor didactic. The political realities and complexities are simply presented as they are – just there, always there – and her characters are forced to confront these forces that exist in their lives and outside of their control; as protagonists they struggle to weave normal lives around what for western readers would be extremely abnormal circumstances.

In “White Lilies”, a drone operator targets a Palestinian who simply seeks a lily to give his neighbour’s young daughter on Mother’s Day; in “A Samarland Moon” an Apache helicopter appears out of the blue to target a young couple who are struggling to work through difficulties in their relationship. The story “Black Grapes” depicts, with a sort of heart-sinking horror, the power imbalances between Arabs and Israeli settlers – even the settlers who aspire to think themselves above racism – and the fragility of Arab lives in occupied Palestine.

Despite their contemporary setting, the stories have an almost faery tale-like quality to them, and so it is appropriate that they have monsters too. These monsters are not the dragons and ogres and giants of traditional faery tales – they are Apache helicopter gunships and missile-firing drones piloted by bored, blasé techs stationed far away. But they are monsters nonetheless, emerging Godzilla-like out of the blue to disrupt Palestinian lives and deny them the hope, freedom, and normalcy that they seek.

Most of these monsters come from without, but there are monsters from within, as well. “Our Milk” portrays in vivid prose two destructive terrorist bombings, one in 1946 and one in 2001, offering vignettes of each scene in the moments before their destruction. “14 June” tells the story of a family simply trying to get on with life amid the chaotic violence of Hamas’ takeover of Gaza (during which the group ousted rivals Fatah and the Palestinian Authority) during June of 2007. All of these stories depict the struggles of ordinary people to build lives and hope amid the destructive violence inflicted upon them by forces outside their control.

These stories, and the others in the collection, bear an unmistakable pride in Palestinians’ perseverance and strength. No matter where the threats and violence they face come from, the characters depicted in these tales refuse to give up the right to dream of a future full of love and freedom. Their ingenuity and determination to build hope in the face of all the barriers which surround them lends the stories a gentle inspirational strength.

Yet it is the descriptive power of Qarmout’s prose that is the outstanding quality of the collection. Drawing on her own experience growing up in Gaza, and concentrating predominantly on the lives of women there, she has woven a beautiful and rewarding collection of short stories. The Sea Cloak & Other Stories ought to be required reading for schools in the West, where it might help pierce through the fog of stereotypes and political power-games which dominate media coverage of Palestine. These stories offer a glimpse of a place full of ordinary people struggling to build lives for themselves – with all the stirring beauty that entails.